No other factory contact me with a very good condition. I was really believing in the bike and in the person. I really believe in the good conditions I have and this was the most important thing to have the best result as possible.

But SWM never ask me to wait and to leave Bernie Schrieber to go in front of me and this has been the most important situation in 83. It when I won for the first time in France. It was in France in my country and I arrive with a tie break with Bernie Scrhieber and I won the event with Bernie Schnrieber 2nd and Eddy Lejeune 3rd. I beat Bernie Schrieber by the one. We had the same cleans and I had one better than him, this was good for me, but not for SWM because if Bernie Schrieber won and me 2nd and Eddy Lejuene 3rd it was better, much better for SWM. But they have been very fair and they accepted that they let me won and no they make everything possible and very fair conditions. It was magical and very sporting and fair conditions. In 1983 was the time I had my first win in the World Championships.

Did you ever ride the SWM monoshock ?

No, no no no I never test this. In 1983 we have the jumbo. The jumbos not he best bike for me. It had a two big engine and it was heavier bike. For me I prefer the 320, at that time we had a new bike and the jumbo was going quite well. We had some trouble at the beginning of the year but after the jumbo go quite well, it was better for Bernie Schrieber. Bernie Schrieber was a very strong rider, me, I was riding more with a different style. More a smooth style when I was riding. The jumbo was heavier. I prefer the 320 but I have no choice. I had to ride on the jumbo, it was ok.
Did you have the confidence at this time, that you could win the Championship or was it still to early in you career ?

No. I thought that I could win one event, but really Eddy Lejeune was leading so well and so strong and it was not possible, for one event it was possible. I was convinced I can win one event but not the World Championship, no.

How many hours a week were you practising a this time ?

Me …… I not say before but I can say now because it was a long time ago I never practise a lot. When I was practising it was very efficient. When I say efficient I mean that I practise one or two hours and it was really important and efficient and concentrated and serious practising. In this time I did not stop and I did not waste time speaking or cleaning sections that were easy. Some riders they were practising all day but it was in fact one or two hours really practising serious. I was really serious and when I was practising it was really a strong practise. Then I don’t remember how many hours but it was much much less than they are riding today for sure. You know it was 10 hours per week …depending whether it was during the season or in the winter. No no, not so much, very few, but some riders were riding much more than me. Some riders were practising almost all day and they were practising much more than me who was practising a little less than normal. Not as important as today.
﻿Did you spend at this time outside of the competition relaxing with Eddy or Pascal or Charles or Phillipe ?
﻿
Between two competitions, sometimes yes, but we were living quite far away and it was quite difficult to be together and share time. Me and others, we also appreciate ourselves and each other now but at the time it was fighting situation and we say “on Sunday we don’t have friends” we say no ?
We were so fighting, sporting situation fighting that we were not friends we were not related inside of the competition to keep the fighting spirit. But it was not a war and not because I did not appreciate him. I did not want to share good times with him many times because it was a conquering time. I had to beat him. 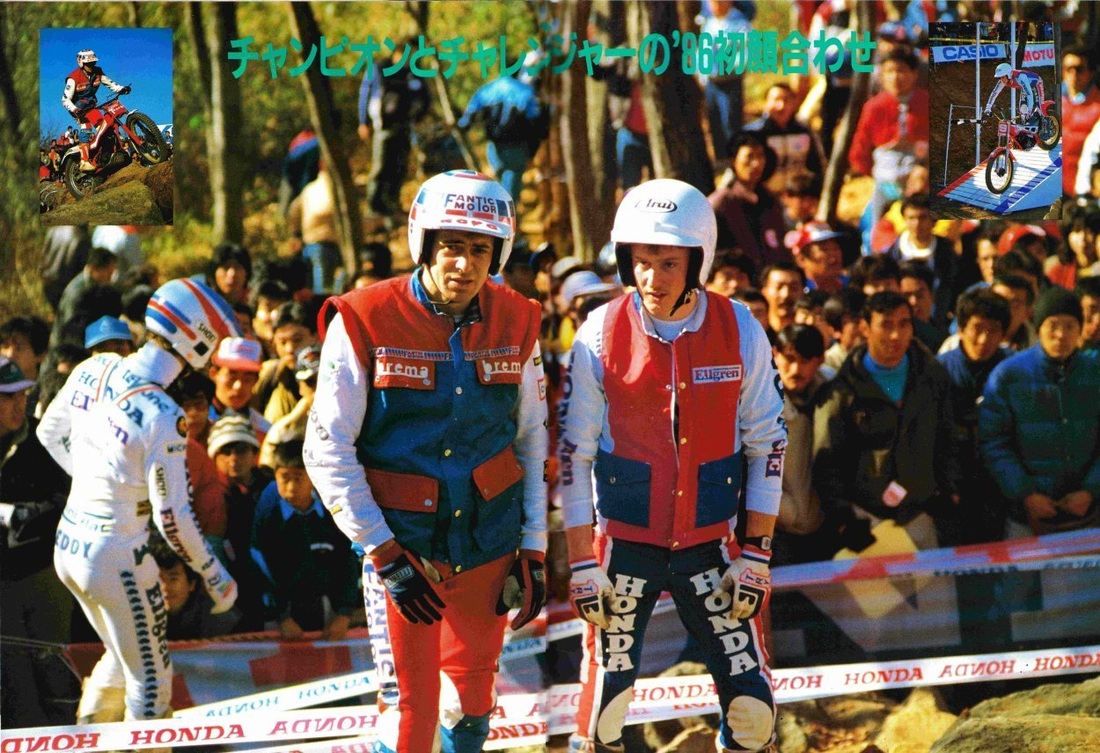