This is a photo of the first Cappra motocross machine of Montesa. It was designed by Pere Pi. 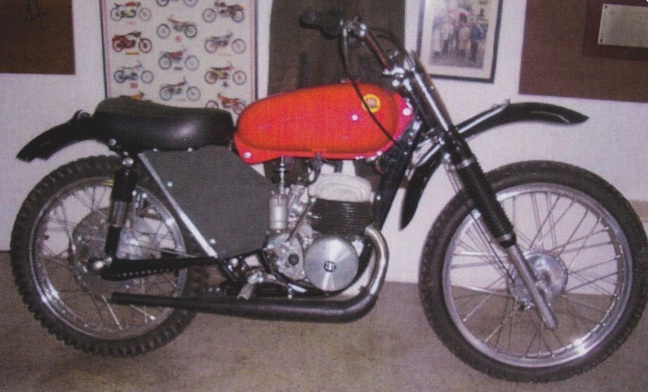 2014 Pere Pi Interview www.retrotrials.com
So you were a rider but you were tasked to develop the moto as well ?

Yes, but I like to ride and also to develop the moto. I love this and love to do this much more. I compete because the factory need this competition and need me to compete. The public ask me, where you ride next week, what you do next week? “Ok, try to win, good luck”. Then I come back from the racing and modify the bike some more. Then if this works good we make different the production. Montesa have me in the competition and me in the development. Then when I finish to compete motocross I stop compete everything for perhaps 1 year and then I begin trial.
Pere's championship winning certificates
In 1964 Pere suffered a bad crash in Motocross and dislocated his shoulder. He faced a long recovery time of 3 months and this wiped out his chances of winning the state Championship that year.

Finally, in 1966 Pere was suffering from mental and physical exhaustion. He would often face dizziness when there were elevation changes in races. This happened for the last time at the motocross de Burgos and Pere retired from the sport.
﻿At this time Montesa have no bike in trial. At this time no trial. Then Bultaco introduce the trial moto in Spain. This was before the Sammy Miller. At the start Bultaco did not see the trial in England, then see in Saint Cucufa in France. They go there and they see the trial. They say “Ok, our bike is smaller 125cc or 150cc and the machines here 350cc or 425cc four strokes, maybe our bike we can make the same and arrive back in Barcelona and try to make a bike and begin the trial. The Sammy Miller was made some 3 years later when the bike is going more or less good but also his bike is smaller, 125 or 150cc. Then me I stop motocross and start all the time montesa development. I see this and think, “ok, maybe trial not so bad because not need to go to the competition the day before. We can start in the morning and go”. Bultaco begin with the trial one year and half before Montesa. Montesa have nothing. Then in 1964 very early in France in Laffrey Grenoble the French Federation they make a school of trial and invite the other European federations, including the Spanish motorcycle federation along to see.

Pere was attracted to trial because it needed no physical preparation and he could come to the trial in the morning and leave afterwards, where as in motocross he was arrive the day before and leave the day after, making it a lot more drawn out.
﻿The Spanish federation ask Bultaco and Montesa please go there with some people. Then Montesa go there and learn about the trial. Mr Permanyer was asked to send some people to the trial and they send me and some others. We go there and learn that the bike must be smaller and that the bike must have thinner seat. Then I go there and one French rider makes display. The tyre must be a little softer to grip and we design the tyre of the trial. We decide the engine must run smoothly at low revolution, ok. There also the Bultaco people. Later we have a dinner, then we go back. I then go back and tell Mr Permanyer that trial is very bad and no good. I am motocross rider. Montesa did nothing until 1966 and then I finish motocross and make one trial. We make one trial bike and modify, modify, modify and compete near Manresa in one competition. ﻿
A rare photo of the first Montesa trial machine ever. This was ridden in one trial only, in Manresa near Barcelona.
At the start on November 1964 Pere rode this first prototype Montesa trial machine. It has been adapted from the Montesa Impalla machine that the company already had. Knowing that Montesa had little chance of winning this first event against more experienced riders and better equipped machines he rode the trial wearing a jacket, tie and shoes. He still however finished in tenth position.
﻿
I then bring back to the factory and modify again and again and then to get more engine inertia for better trial. Then we keep modifying and take to competitions to check things. Then after 4 competitions I am first in the trial on the Montesa and I beat the Bultaco. I develop and win on the motocross and then do the same on the trial and I am first. Then I begin 1968 the first Spanish Championship in trial. The Spanish federation start this and I win. Very good moment and at this time I was 28 year beginning trials. I have the feeling of motocross. It is not completely different, some feeling similar.

When I develop this bike and ride and win, I see the Bultaco and I beat them, I think we can make this bike in production. The bike I ride in the first four trials, we decide to make it in production. This time, when we put it into production we make better. The bike had no name so we call it “trial 250”.

This man works in the engine development area of Montesa and modifies them and makes them better.

The first Montesa trial was called the “trial 250” and only 49 made.
Jordi Ros was the designer of the Cota 123 engine as well as many others. His official title was "Chief Technical DID"
Montesa order enough parts to make 50 bikes but 1 I think have some defect. Finally we make 49 and we sell 44, because maybe one for me, Oriel, Jordi, no Jordi later. Then we sell. We have success and many people love to see the Montesa trial as they have a Montesa mentality and have other Montesa road bike. They say “ok we like”. We then develop and realise that the engine is a little too high and then we decide to move this a little down. It was 28 mm to high. We know because the engine was slower and the engine revs to slow and there was not the right feeling, you know. Then we change the engine and reduce this stroke and it is better. We then decide one night at home that the petrol tank and seat could be shaped like a banana ha ha ha.

Then in the morning when I arrive in Montesa and make the seat and the petrol tank to be one unit and make it all together. The first idea was no make look like a banana. The seat was very small, then the seat, tank unit was attached and then this was the Cota. This was the 2nd production of the Montesa 250. I ask my friends around the factory to think of a name of the new bike “you suggest one name of the new trial bike”. I then get these names and then make a card for people to make a cross next to the name they like. We then have 3 names. It is very clear that Cota was the correct name. The Cota means a level. This is one word that can be used in Spanish and Catalan.

At the first we make a long list, then we make a vote and see how many points each name get. The Cota name wins by so much.  The first Cota seat we make with plasticine and all this is my work at Montesa. We buy much of this to make the prototype. First we place a small piece of steel there and then on top we place plasticine there. More and more we make the line of the centre and make one side in one shape and the other side is another shape. Then all of the friends decide which side they like. After one day, the shape is decided and goes to one factory so they make the fibreglass. First these people then put soap on the plasticine and then they use the plaster to make the mould. They make the plaster on the inside and outside, then they make both sides and then join to make the first fibre glass tank.
﻿The Montesa Cota Trail with a Plasticine petrol tank. Pere designed this Trial machine and he was so keen to spend as much time getting it perfect that he took it home to work on it over the weekends. This photo is taken in his sitting room.﻿
A wonderful photo of the inside of the "DID" competition department at Montesa Esplugues factory. The photographer was Pertti Luhtasuo from Finland. He was a very good rider at the time. In the photo you can see Oton Tena, Pedro Pi and Alberto Mallofre.The moto was Pertti's own Cota 247 and he says that this was the first bike to be fitted with MZ aluminium rims without the high sides "mud collectors" . This was the first time they had been seen in Montesa and you can see Pere looking at them . 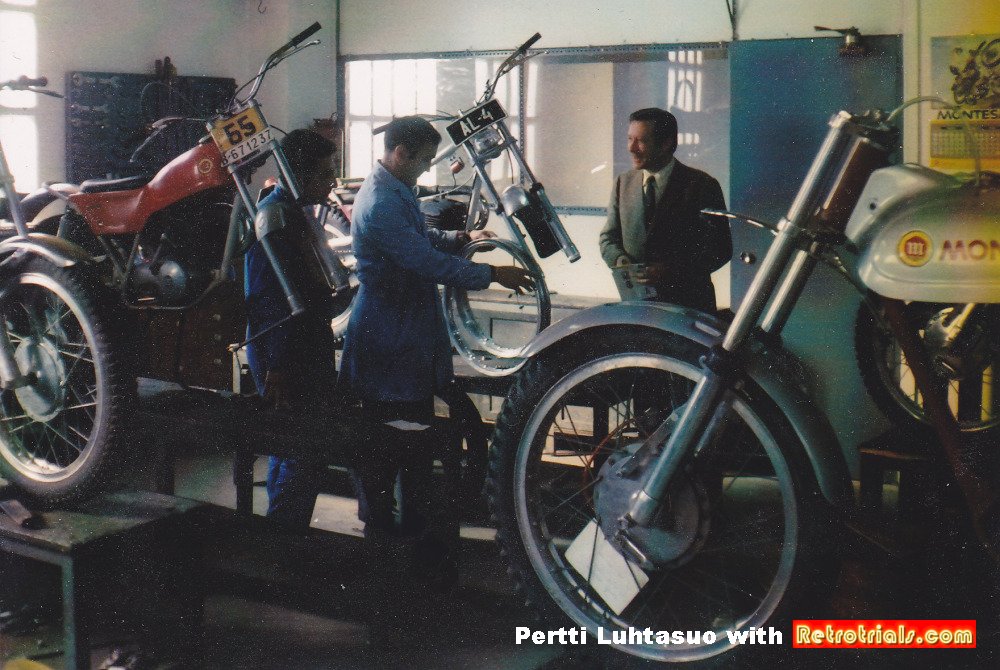 A nice photo of the Montesa football team. I wonder if they ever played Bultaco ?
Pere bottom row middle with Xavier Permanyer to his right. Xavier write Pere that nice tribute at the start . 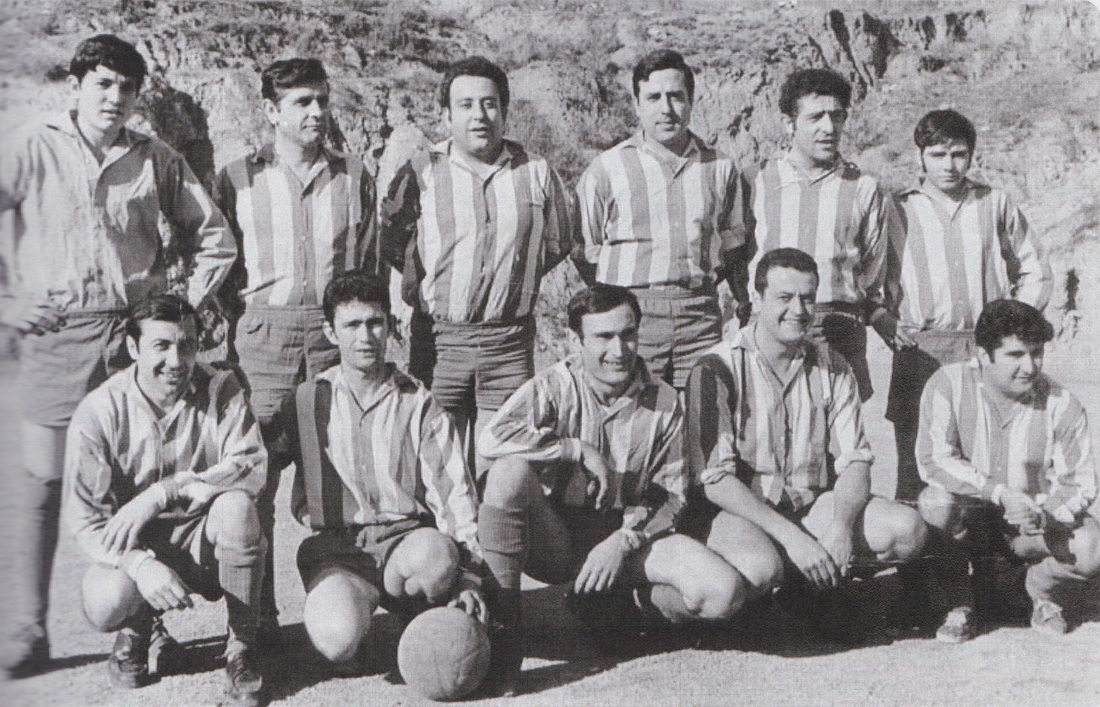