Different chassis and different suspension ?
Yes, they like to do all different.

It was always fighting between the people
Its unusual to have photos from the inside of the Montesa competition department, so thank you to  Pertti Luhtasuo for sending these to me.

This is a photo inside the competition department taken in 1970. Oton Tena was mechanic in Montesa factory in departemento investigacion. (Pedro Pi`s department). He was also Kalevi Vehkonens mechanic travelling two years with Kalevi and when Kalevi was raced in Finland, Oton was working with bikes in my home. Sorry to say but Oton died some ten years ago. 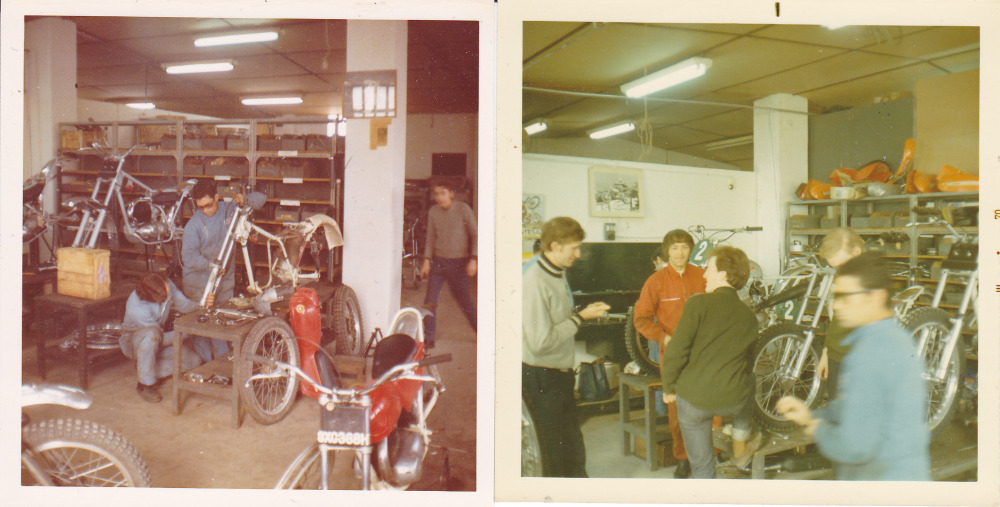 2015 Exclusive Jaime Subira career Interview www.retrotrials.com
Photo from Pertti Luhtasuo. The Montesa factory before the trial in 1970 near Barcelona. You can find Oton Tena, Pedro Pi and Alberto Mallofre. My 247 and MZ aluminium rims with out "mud collectors" first times seen in Montesa. I have many pictures from the factory. 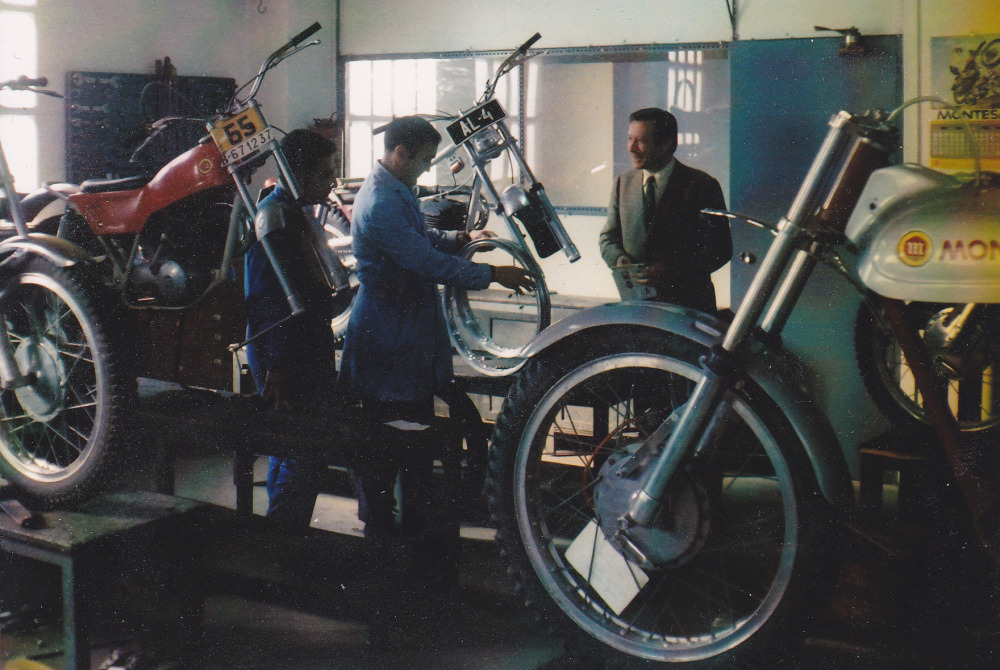 2015 Exclusive Jaime Subira career Interview www.retrotrials.com
Why didn’t the boss above say “what are you boys doing?”

I don’t know but at this time I was not happy so for one year I do my bike at my home myself with some parts from Bultaco factory. Montesa don’t know what parts I have in my bike and it’s the only way to have a good bike I had some Bultaco parts in my bike, like suspension. Montesa no like this so I do in my house so nobody know what I have in my bike.
When I go out from Montesa and I go to Fantic, Vesterinan comes to Montesa and at this moment I was building this house and needed money so I sell my bike. Montesa say to me, Jaime, one thing we change you bike for a new bike because Vesterinan was not happy with his bike the Montesa. Vesterinan ride for the first year with my bike, the one I took to my home with Bultaco parts and some other parts ha ha ha. The Bultaco front suspension. The engine also I do at my home. I was not happy with the ambiance in Montesa

Did you change the chassis angle with your Montesa?

Of course you had very good times but at the end were you sad to leave Montesa or were you happy to go at this time?

Yes many good times but I get out at the beginning of the big problems with Montesa. 2 years later start big problems for Montesa but not at the time I was in Montesa, not so many big problems.

So you go to Fantic. You could have gone to anyone, so why did you change to Fantic?

At this moment Bultaco is finished and it wasn’t only Montesa in Spain. I was not happy with Montesa so the only chance was to go out of Spain because there was no chance in Spain

Did you think at this time that you might have had to walk away from trial?