A detailed interview with Oriol Puig Bulto + full access to his photo gallery and Trial records.
Early photos of Oriol in his early 20's competing in road racing.
​But the frames were made in Esparreguera .

Did the frames arrive painted at the factory ?

Paco was an industrial engineer and he was a Doctor in this field. He had been Spanish road racing champion in 1935 before the war ,but yes he was more for the competition and the design and the development , but not for the production and that's was this was covered by Mr Joan Chalamanch .
These early road race and road rally photos of Oriol were taken at the very start of his riding career ,whilst he was competing on Montesa's.
​I was really to big for road racing as the machines were very small.
It really was a good time because we had Rafael Ariño in the drawing office and Albert Nomen in the research department.  He was very good. These engineers worked with Mr Chalamanch and the 2 Nomen brothers came from a very good technical background and completed a very good technical team. The Nomen brothers came from a company that was building the aircraft engines and who had previously built automobiles.

When you started with Bultaco what position and what role did you start in ?.

First i started as a development engineer. It was a nice period when we started. I was riding at the weekends and drawing in the week times .  Usually what I made was the sketches to overcome problems at the time and also to improve the design.  At this time a big problem was suspension.  When I see today suspensions i think my mother ! ha ha.  I was trying to get the right  right balance between two little damping and too much damping and too much or too little spring and to stop the bottoming out and to stop the fork stanchions from bending.  I watched closely and saw the fork stanchions bending and I made a kind of copy of the Ceriani forks for the bultaco. First  I made a sketch and then developed the suspension .

Was the suspension made by Bultaco or was it made by Betor?.
Oriol competes in an early motocross onboard the Bultaco Tralla 101.  Note the distinctive from wheel hubs
Well of course we made the first prototypes in Bultaco and then chose amongst other companies like Betor and Telesco. The Telesco company was the property of I think Manuel Giro from Ossa and Elizalde who was the man who ran Ossa , the general manager and then of course Telesco. I was a very close friend with the Elizalde family. In fact the Elizalde brothers,  Juan and Jose Maria brothers taught me to ride off Road.  I remember that this first off road experience was when I was still working at Montesa. I liked the off road riding and at this time we had the 2 days of Todoterreno ( is the name of the old enduro) . The name enduro was not being used at this stage. We were preparing our competition machines with the Elizalde brothers and at this time i was practising a lot and learnt a lot from the Elisisaldi brothers. We're  very good friends but then they stayed in Montesa when Montesa was split and in fact Tei or Juan Elizalde won the first race that bultaco participated in at Monjuic.

​I recall that on the last corner before the finishing line Elisaldi beat John Grace . John Grace came second on the Bultaco.  Bultaco wanted to win at first race so badly but we didn't ha ha ha. It was Montesa who won but then it was extraordinary because we discovered at this time a surprise in the compliance with the rules .
Oriol riding his Montesa Brio , right at the very start of his motorcycle career 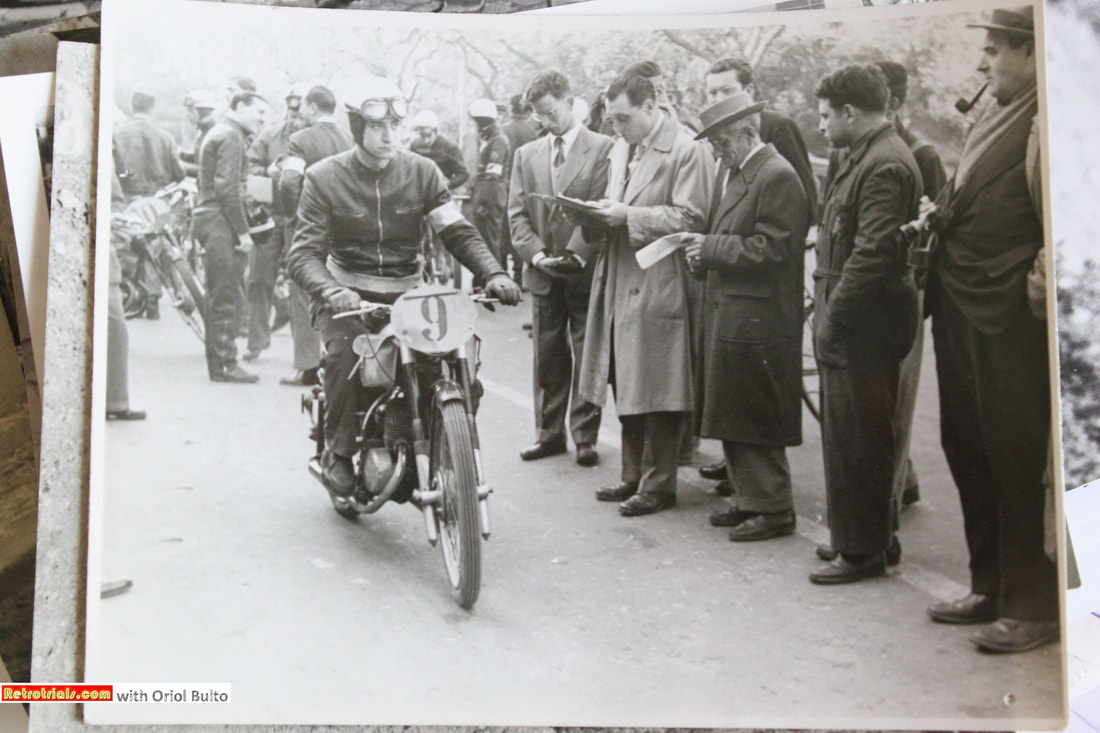