I am the administrator of the traveling, I pay for everything, I drive the truck and make the tents at the trial. I cook the food for everyone and also mend the bikes. I was not just mechanic, I was the father and the mother of these boy riders ha ha ha. I have to do everything for them. I was a very busy man. Gordon Farley was a very good man. He had the wife to Malcolm Rathmell. I think Rathmell take the wife of Gordon Farley. Also, Caroline Sandiford is beautiful. Maybe I send me grand daughter to Caroline to learn English. She loves the motorcycle also.
Paco erects the Montesa awning at the 1988 World trial at Butser. Photo by Richard Baker 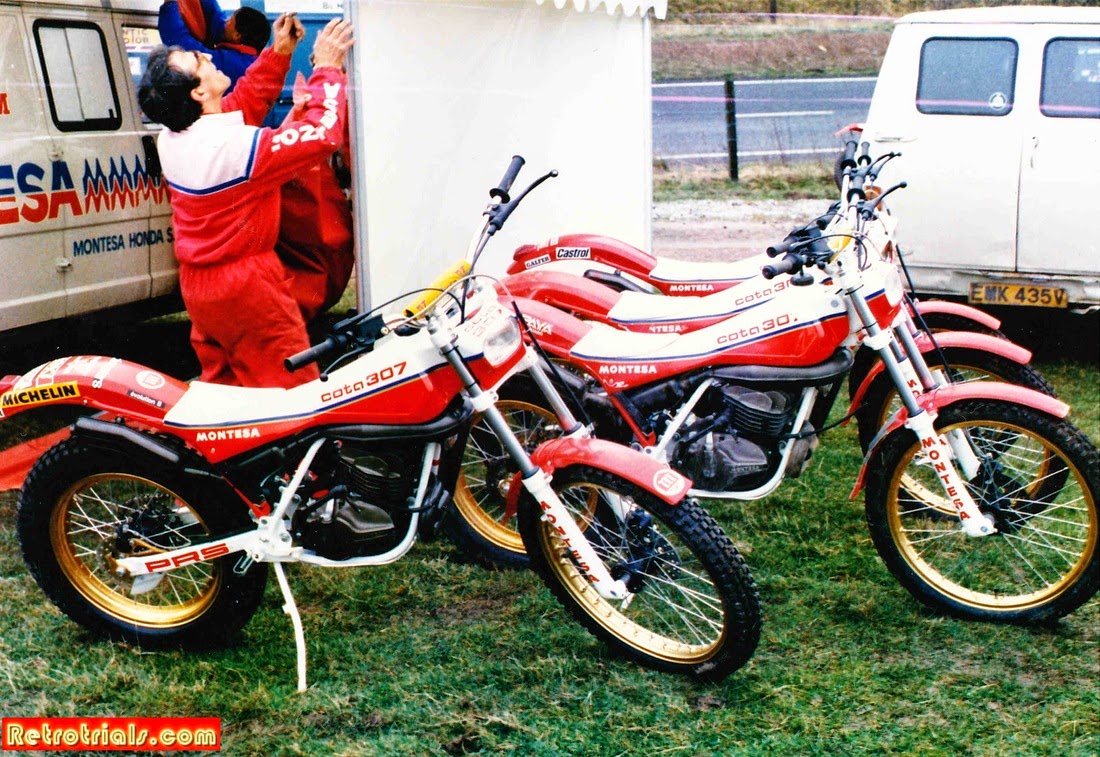 So you were the driver of the truck for all of those years ? Did it ever break down ?

I never never had problems like this. Everything was not simple though. When I lived in California with Kim Kimball, I go to many races in the desert Mojave and also the baja rally.
﻿ After the races we would drive 400 or 1000 miles back to California. Much driving for days and days…but the fuel was cheap in this place so it was ok. At these desert races I used to follow the top riders in a small plane. I would see them crash or them riding good or bad. Then if we see a problem we would land on the bumpy ground and go and help the rider. They would shout “water water” as it was so hot. I would carry spares and tools in the plane and mend the bikes for the riders. Then they would be off again brmmmmmmm ha ha ha ha. It was my job to help the riders. In the middle of the Mojave desert in one pick place, we land the plane to collect food and water. Kimballs say to me “You stay here” and the plane with everyone would go and I was alone in the desert. No noise, no nothing. It was strang﻿e .
A photo of the well known Montesa importer Kim Kimball looking up an old desert climb he used to ride
﻿It must have been very strange for a boy from Barcelona to living and wInterview  Montesa trial mechanic Paco Mateo www.retrotrials.com  photo montesaorking in Barcelona ?

Yes, yes, at this time only a few people do things like this. Is not like today when travel is cheap and easy.

How did you manage to do everything with all of the Franco rules ?

You know when I am at the races in Europe we go to Yugoslavia which was the place on the communist with the dictator and also Czechoslovakia. I would drive the truck to these places and then have big problems when I come back to Spain. At this time if Franco did not allow anyone who has been to Yugoslavia or Czechoslovakia to come back into Spain, at these foreign places they mark the passport and when you come back to Spain you could be sent to jail for going to these communist countries . We could not go to these places at all.
But  wouldn’t you avoid the problem by telling Franco that you were going racing at these places ?

Yes, but Franco say no ….you no go these places. We have to escape these places. When I arrive at the border of these communist places with the military men I say “Do not mark my pass book because there are many problems in Spain”. They are happy with pecetas ha ha ha ha ha . Pecetas is international currency ha ha ha ha .I make friends with them with my Spanish Montesa money ….but of course I have changed the money into the money of the place I am at …the local currency…but it is still Spanish money ha ha ha . every country I go I change.

Did you get the foreign currency before you left ?