Which person at SWM did you spend most time dealing with ?

This man was called Piero Kucklican, but he was not the boss of SWM. He was a man who was the team manager of the race department. It was not really a man employed by the factory it was a man who give a lot of time to the trial and the factory appreciate him and ask see his potential and ask him to choose the riders.
He was very close to Bernie Schrieber and other riders and when he talks to the factory and tell them it is good to take these riders to the factory listened to him, but he was not an employee. He was not working in the factory, Piero Kucklican, he was a dentist from Milano, an intelligent person.

Did he ever do any of the work on your teeth ?

No no no never
Pietro Sironi , SWM company director
Unfortunately in 1986 the bubble burst and Pietro Sironi's love affair with motorcycles ended. Despite a radical new water cooled model and a clean broom through the factory in the form of a modernisation programme, emerging brands from the east pushed SWM off the dealers floors. Frustration with Government red tape, pressure from Unions all conspired together by chance, simultaneously closing the doors for ever after false hopes years later of a rebirth.
Did you do a lot of the testing or was this more Burgat and Schrieber ?

In SWM I make very few test because I was very young and Bernie Schrieber makes first before me. The factory and the bike was really riding well. I did a lot of testing but with Fantic not with SWM.

Not SWM, it was Giles Burgat and after me, not the factory, the rider because Pernod was French sponsor, alcohol sponsor.
How did this deal come about?

We had a contract with the French importer of SWM. In fact it was all the French riders who were riding with SWM had a contract with Pernod. I can't remember how the relationship started and why the makes of Pernod and SWM came together. I can't remember. I just remember that all the other French rider, Giles Burgat but also enduro riders with SWM ride with Pernod.

Did you have to do promotional work for Pernod ?

No no, well some time when there was a presentation and so I was present but they never wanted more than us to put the sticker on the bike.

﻿How were the bikes of Burgat and Scheiber different to your bike ?

Me, when I was on SWM in 1982, Giles Burgat was with Fantic. I was not at the same time as Giles Burgat, but I was at the same time as Bernie Schrieber, who years ago I was sharing many good times with him in SWM.
I think Bernie Schreiber was a top rider and had an arrangement to get the special parts just before me but really I had quite the same bike. Really my bike was, my bike was fantastic. It was not a big issue.

What was it like to ride with Bernie at the time ?

It was fantastic for me and he was fantastic to me as well. It was because he accepted me and also in 1983 when I was beating him sometimes he was really very good and never aggressive and accepting me as a team member and a friend sometimes. He was living in the South of France just an hour and a half from my house and we were practising quite often together. He was really fantastic. It has been my grand brother. He became a brother for me and it takes time with me and explains many things to me and he has been very nice to me, very very good times.
Its June 20 1982 at the Alberta Canadian World Trial. Bernie has just been presented with his native head dress for winning the trial. 4th placed Charles Coutard and Bernie line up with 2nd placed Thierry Michaud. Eddy Lejeune was 2nd. 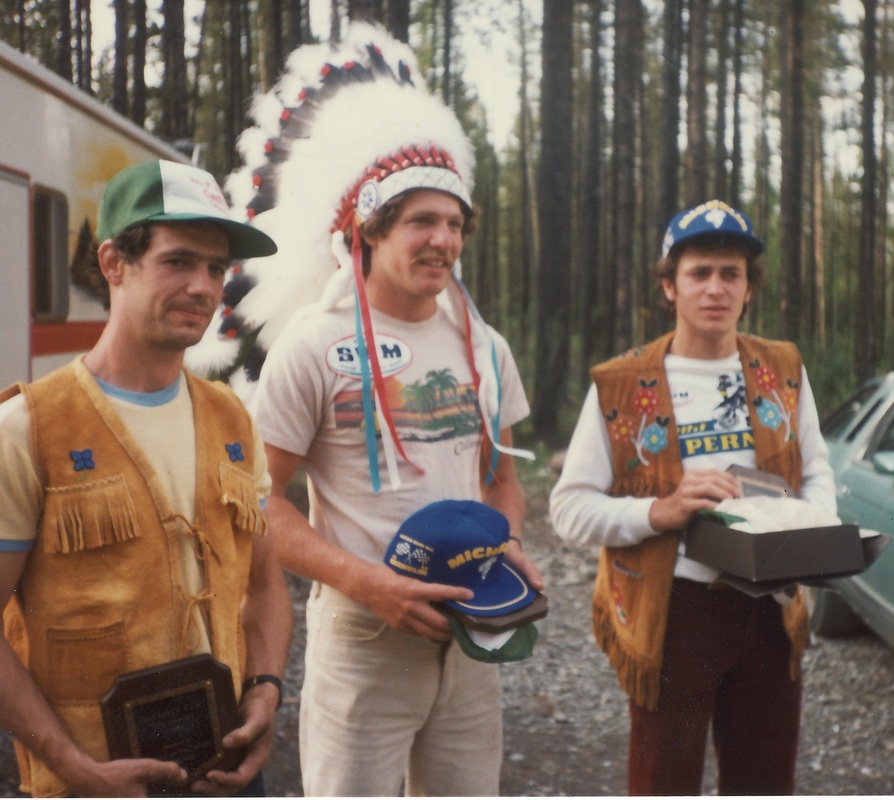