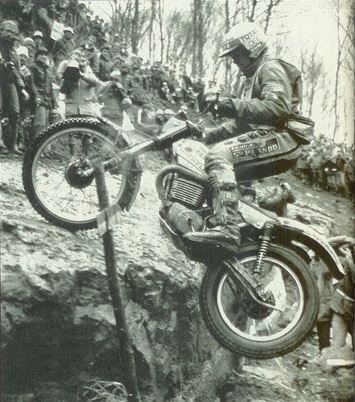 Thierry Michaud Bilstain Step 1983 photo Moto Verde
Did you travel to the 1982 World Trials with Fred ?

Yes yes we were travelling together, just to save some money of course and also at this time we didn’t have minders. We have my brother and me in the van and two bikes and spares parts and we can ride the World Championship. When we arrived later I was a factory rider with SWM and later with Fantic factories but it was much more easier then. We don’t need our parents, minders, camping lorries mechanics and so and so, it was much easier and much more simple. This is a big problem we have with trial now, but this interview is not about the trial now.

In 1982 was your SWM standard or how was it modified ?

No, it was not standard bike but it was not a very special bike as the riders have now. As I remember we have a very good engine and as I remember with the SWM we have a lot of problem with the clutch and on our factory bikes we make changes to the clutch. We have a good engine a good clutch, not many special things. It was quite a standard bike at this time.
﻿Was the chassis the same ?

﻿Ahh, I don't remember. I think the chassis on the 320 SWM was really quite standard bike. In 1982 I have a good engine and a good clutch and suspension but I don’t know if the frame was different. I remember that's all. We had quite a special exhaust pipe, I remember but I don’t remember about everything. I remember that we worry about the clutch because I was one of the first riders perhaps the first one who use the clutch you know, to make the clutch slip, not as they are using now. I was coming from the 125 and I was one of the first riders to use the clutch to have more power and accelerate.

When you come to the corner you would pull the clutch in as well ?

You were doing very well but who was motivating you and who was pushing you, or was there no one ?

Myself, no one else. I don’t like to speak about me.

No, no, I found more motivation in this situation. I was not motivated by the money I was not motivated by being famous, by being a famous person. Me, I was 19 and a very simple person. I didn’t want to try and be a star. I was just thinking to be in the World Championship and the French Championship when I was younger. It was just a situation when you travel for many hours in the car, when you spend a lot of money you or your parents, when you are here and it is a competition when you are in this situation at this moment you have to be motivated. If not you stay at home. For me the motivation was totally natural. It seems to be incredible but I remember it was the feeling I have. I am here to do my best and after if you have the possibility to win the competition you have to go 100 % motivated.
It wasn’t motivation from others it was natural motivation from me. For me it was natural to be motivated 100%. If not you stay at home and you make a leisure sport not a competition sport. Competition is just not to win because there is only one first place but to do the maximum. It's simple. If you are here it is to do your maximum. Where is you maximum? If you want to know you have to try and to try and find this maximum, perhaps you don’t know what is your maximum. I was quite in good condition. I have the spirit and the mind to do competition and dedicated. My mind was my first and best quality perhaps.
A wonderful photo by Iain Lawrie of Thierry Michaud at the 1983 Scottish Six Days Trial 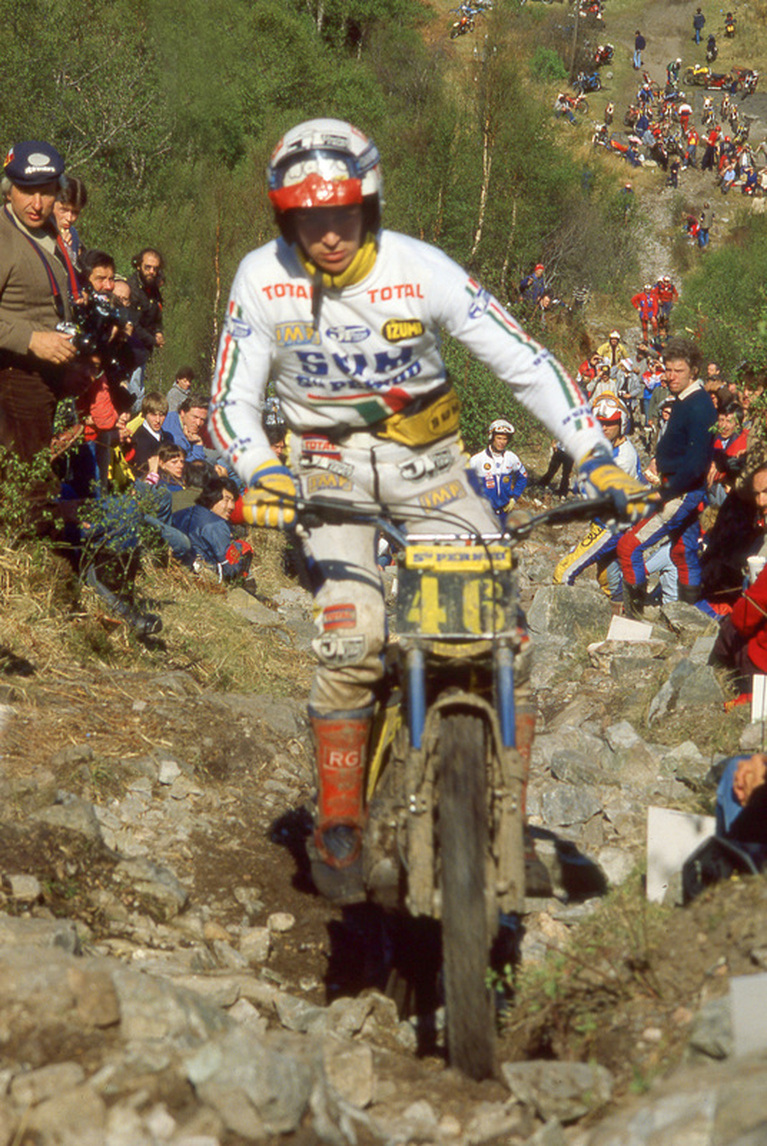 2014 Thierry Michaud interview www.retrotrials.com photo Iain Lawrie
Did your mother and father come to the trial to watch you ?

Very few times but a little later because they were walking and I was travelling with my brother. Then of course they came sometimes but they were more with me when I was younger when I needed them to pay and to drive the car and to bring me. This would have been when I am 18, 19 or 20 and so and so they come as spectators. This had been something difficult for my parents to accept. They did not come so many times but at this time I was totally independent from them at 18 or 19 years old. It's quite young and in fact I was really ….. I don’t know the English word, but I was independent with everything.