I noticed that you rode with Garibaldi clothing at this time. How did this deal come about?

2013 Marc Colomer Interview WWW.RETROTRIALS.COM
Marc is seen here modelling both the one piece suit that was available at the time and the more traditional Garibaldi waved jackets.
Did you arrange these contracts yourself or did you employ an agent to get you sponsorship?

At this time it was the change in the way riders do business. Before the riders go with factory and some small private contract, but it change a lot and riders have agents to do business. My agent was Octagen S2, the people who organise the Indoor Trials in Spain. They are also my agent at this time. They help me with this.

From 1992 at the Ireland World Trial your results suddenly improve significantly. From lower places you suddenly get a lot better.  What was the reason for this?

I remember the place …..aahhhh in 92, yes. I understand now. I make the first 6 races of the Championship and I make 8, 9 10th position. Then yes, I make podium, I remember things get better for me and I get podiums for the first time. But I don’t know why this change ha ha ha.  I remember this but, I don’t know ha ha.

Why did you change to Beta?

Because at this time my home was Montesa for sure but at this time they say it was not possible for me to have a good bike for the 93 and 94 season, because they stop building the Montesa engine and arrive Honda engine with the new bike. At the end of 1992 when I saw this prototype, I say for me this is two steps back and I prefer to go to another place for a better bike and maybe for the future if you have a good bike maybe I come back. This was the case and yes I come back ha ha.
Marc Colomer on one of the rare occasions he visited Rellinars to practice with Jordi Tarres and Amos Bilbao 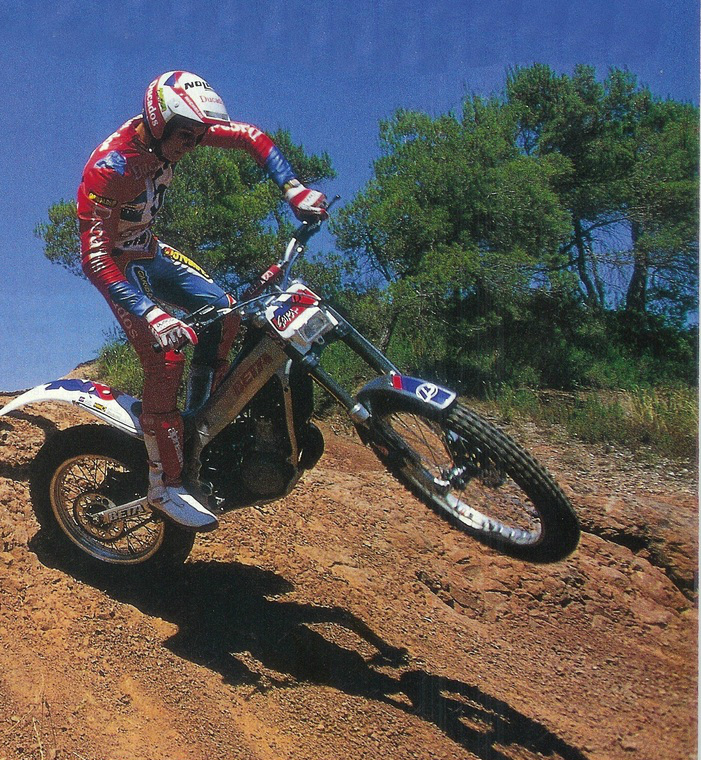 2013 Marc Colomer Interview WWW.RETROTRIALS.COM
In 1993 you have your first win at Luxembourg. What can you remember about that day?

The first thing was …argghhh funny and it was incredible for me but was not my goal and for sure for all the people it was impossible to think I can win this race. This was for Jordi or Bosis to win, not me. Then after the race for sure I am happy but not incredible happy because at the end my goal was to be ready to not win one race but to win all the Championship. At this time I say to myself, ok, I win one race but I’m not ready to win the World Championship. For this I was only quite happy as it was not my end goal. Then I would be happy ha ha.

In 1993 you had a terrific year finishing 2nd in the Outdoor and 3rd in the World Indoor Championships. Can you explain what improvements you and the team were making that helped you get this great result?

Yes, I have a good year. Not the help of the bike because I have one problem this year. I make the season with 2 bikes. The first part with the gara, this was the standard bike. From Italy I start with the techno. Then I change the bike and this was not a perfect bike in any way. At the end my goal was to work every day more and more and for sure this was first 2nd place in the World Championship and it was great. I think that this change of the bike for a rider is normally a problem when you change from one prototype to another in the middle of the season but in my case for the motivation I think it was great for me and really help you to get this new bike. 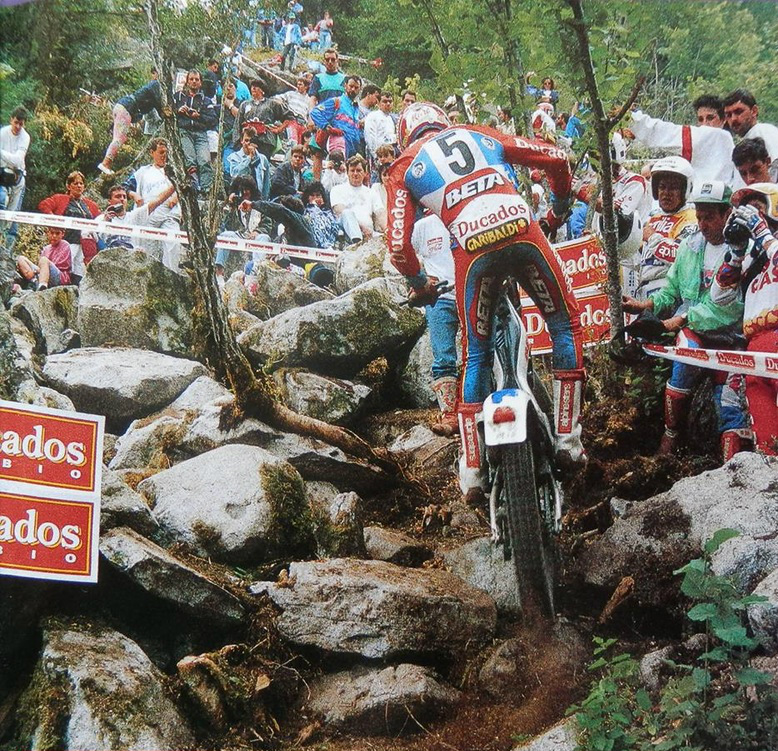 2013 Marc Colomer Interview WWW.RETROTRIALS.COM Photo Makoto Sugitani
Were you having problems with the new Beta prototype? 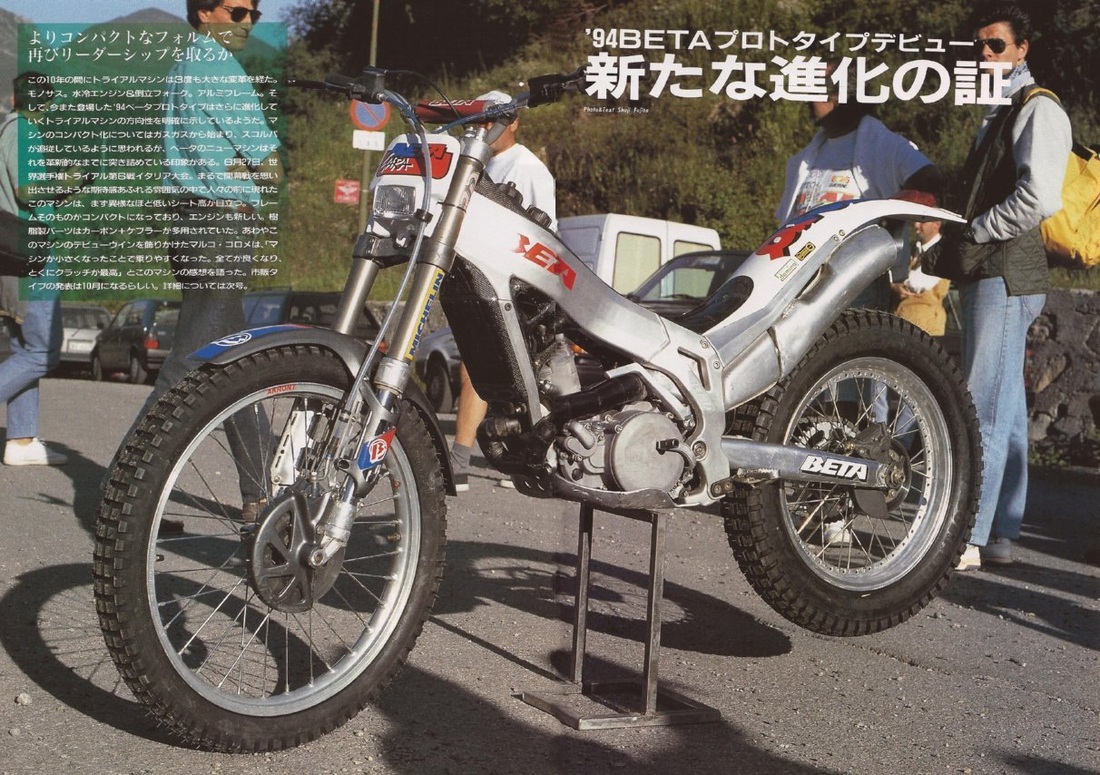 2013 Marc Colomer Interview WWW.RETROTRIALS.COM Photo Makoto Sugitani
Yes, lots of problems with the bike. In Italy in the first face at Fopollo the race was at 2000 metres above the sea. The bike have no power and we do not have many parts to change on the bike but the extra motivation for me was huge. The new bike on this day was lighter than the old. Also many people were watching me on the new Beta and they look to see if it is a great bike. I had extra motivation to prove the machine. We had some problems but at the end nothing big on this day. Also many people were watching me and expecting the new Beta to be better than this.
In 1994 in IMER DE PRESOLANA in Italy, I have a large accident. It was a problem on section one … I don’t know what happened. Fredrick Crosset or Cammozzi I think, I don’t know, fighting with the commissoner. After the other riders say forget this section because this rider go in the section and say “Ok no riders come in the section”. He was fighting with the observer just before. The other riders look at the time on the watch and think what do we do, what do we do? 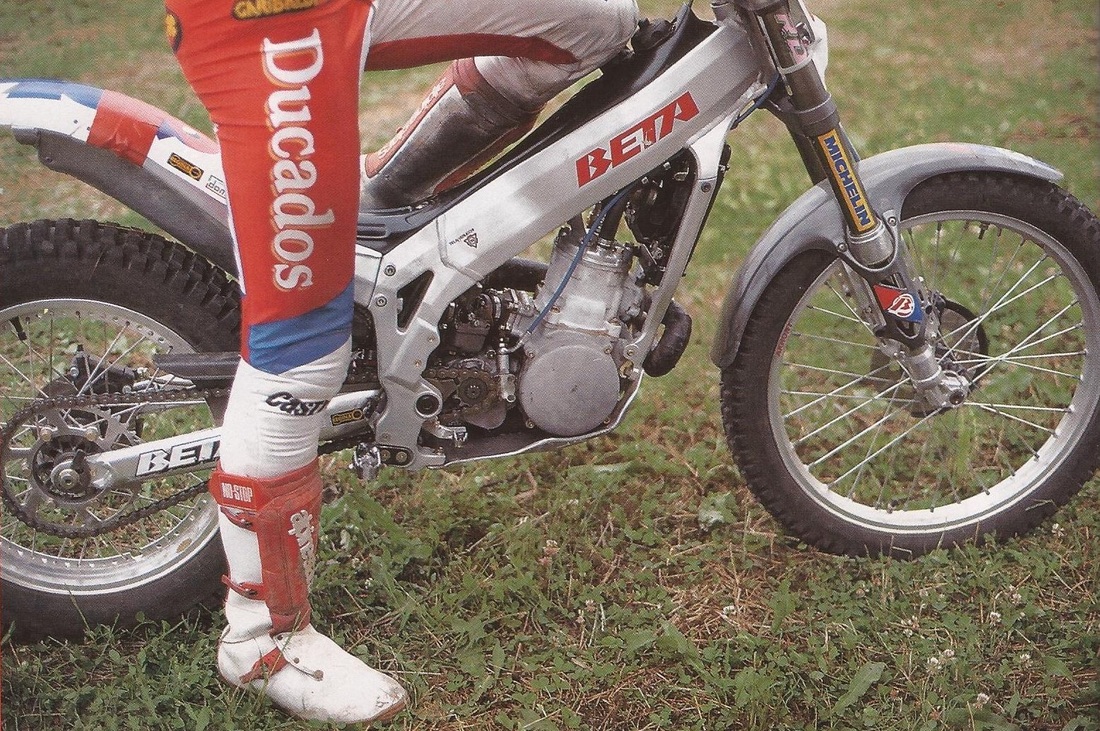 2013 Marc Colomer Interview WWW.RETROTRIALS.COM Photo Makoto Sugitani
They decide to go on to the section 2 and we forget this. The organisers come and we tell them what is the problem and we say all the riders go to section 2 and we all go to section 2. At this time one Italian rider his name is Bertaldo I think, he ride near me on the road to the next section. He take me in the body with the handlebar and I go on the floor and the bike go down and crash bad and I have problems with my arm and I make 2 or 3 sections more but after it was impossible to continue. I retired at this race because of this crash. 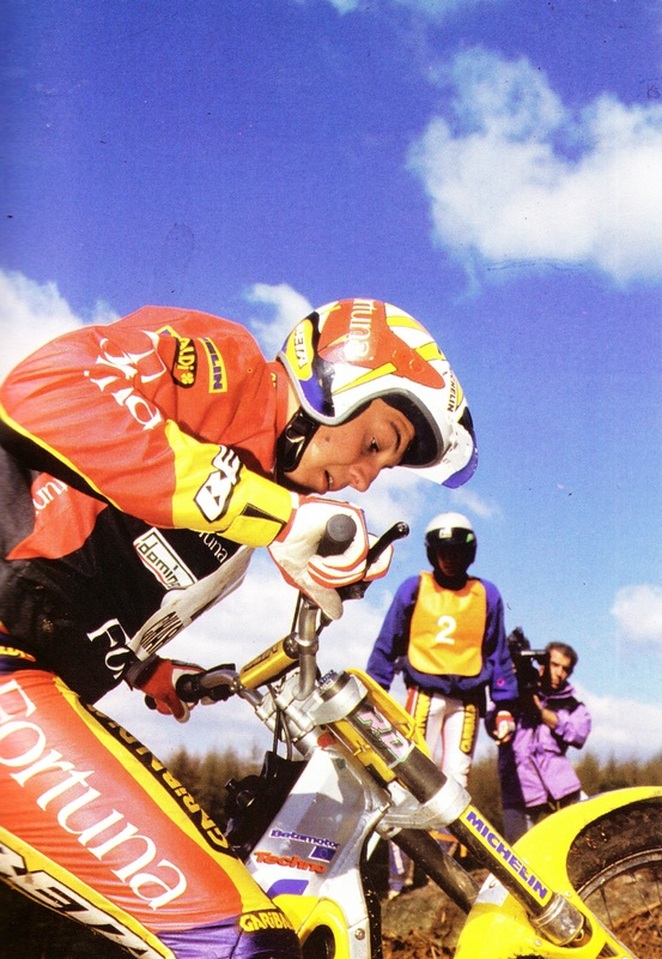 2013 Marc Colomer Interview WWW.RETROTRIALS.COM Photo by Mario from Phototrial.it
This crash was not the reason I change to Montesa. I had injury to my shoulder and arm but after 1 month it was gone so no long problem. It was not broken. It was just accident. All the rides had spent much time at section 1 doing nothing and there were very nervous to get to section 2 first and of course we drive fast and this rider he take me to the ground.

You remember this well, I can tell!!