Did you help to develop the Montesa 315?

When I arrived at Montesa at the end of 1994, Montesa propose to me to develop the 315, the prototype of the 315 but from August 95, the World Championship of 95, I would have to make with one bike only which I have. This one bike is the complete prototype and was from Antonio Cobas and had an aluminium delta box chassis and it was with the hydraulic clutch and with the real vertical shock and the frame it was more light. It’s completely different to the standard bike and they propose for me to make this bike on for the season 1995. I develop this bike with the other people at the factory. But this bike was only for this one season, it never exists for the production and then I start the development of the 315 in the September on 1995.

When you first changed to Montesa at this time was the bike you rode a better bike than the Beta you had come from?

No, no, from 94 to 95 no, it was not a better bike. I make this change because I know at this time the 96 prototype the 315. I saw the pictures and then I sacrifice I think the 95 season as this bike was not perfect. It was more or less the bike Amos used in 94, a little different but not much. It was not very good this bike. I sacrifice this to have the good bike in 96, 315.

Were you good friends with Jordi at this time?

Yes, yes,…..well good friends? Pheeeeeew. Good friends? It was impossible to be good friends because ….Now it is different, now the riders have more relations between each other. At this moment the relations between us was only at the races .No fighting, well sometimes ha ha. But good relations was impossible for us to have normal relations. Too much stress and also at this moment it was very important for the sponsor. We together have the same sponsor Ducados after Fortuna and this was great and important thing to have. Now maybe it’s only important to get the first position, but then there were more things to be concerned about. The sponsors, the manufacturers, many things.

In 1995 you were faced yet again with the rock Jordi Tarres in your way. Did you ever think you were going to be able to beat him? How did this affect you?
For me it was more surprise when I win the lot in 1996. Maybe it was more of a surprise for me when I win some races in 95 because the bike was not perfect and at this time I was not motivated to win the World Championship. In 95 I was 20 years old, only 6 years before Jordi was for me impossible not only to beat, but impossible to meet ha ha, because he was for me he was great. It was impossible for me to even talk to. It was not easy for me to handle in my head 6 years later to be the first problem for Jordi as at the moment I was the first problem for him. It was a little difficult for me to work out in my head. It was strange for me.
What were your strengths as a rider?

Maybe, yes …in the easier sections he was consistent. In these easier sections he was stronger at this moment. At the moment it was only in this case that he was stronger. You know for example in France the races are very difficult and in 95 the race was very easy and I think for sure it was better for him. It was very unusual to have an easy trial in France, but it happened this way. Before the races in 95 and in 96 I think his goal was to say to the organisation to make the races a little more easy because he knows this. He is better at the easy section, yes because he has many experience and my better technique is not needed when it is easy and it’s better for him as you have to be more consistent. His experience help with this. 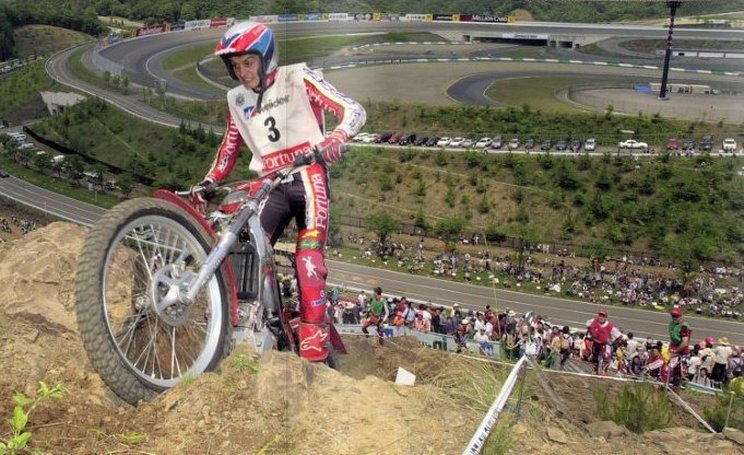 2013 Marc Colomer Interview WWW.RETROTRIALS.COM Photo by Mario from Phototrial.it
In 1996 do you think that you had a better bike than Jordi?

Yes, completely yes. Sure, don’t know 100 percent, because I don’t test his bike but I think my bike at this time was the better bike.