I started working in the competition department with Francisco Domas, who was the man who made the red Derbi race bikes for Angel Nieto. I then find another boy who just starts in Derbi and I ask him if he wants to stay in this place and work with Jordi’s father for half day. Jordi’s father say “Ok”. After some months, maybe 6 months, more around 2 years after me begin there I go completely 100% with Francisco Domas.

What did you do?

I was just there to see and help and look. I would run around. I was just a boy when I start with Derbi. I did not know about riding moto. As time went on I got interest in the motos. At 12.30 midday, I had some free time. It was the time to go to lunch for one hour and a half and then at 2 we work again. I knew Jordi’s father come back to work at 4 o’clock. I knew that we had 2 hours with no director, no boss. Then we have fun and joke about. Then I try the motorcycle for the first time inside the factory. It was a very big place. Then later I get some interest in the moto and I see for the first time the Gymkhana.

My prior understanding of Gymkhana was horse riding over obstacles. However in Spain, prior to the first ever Trial the fairly similar sport of Gymkhana existed.

Pere was the undisputed master of Gymkhana. This was a small fairly centralized sport that the factories encouraged to promote their machines. This is the Spanish predecessor to trials.
Here are nice old photos of other Derbi 98cc riders at the same time. They help to give you a good look of what the sport was all about. There even seems to be a class for carrying your mum :)
As I was riding in the factory there were machines and much equipment everywhere. I got a lot of practise riding like this, in tight places. My riding was just like the Gymkhana. In the first time I ever go to competition in Granolles, I finish 2nd. I was 15 at this time. Then in another town there was the 2nd Gymkhana and I practise a lot more and I get to understand the rules, this was 2 weeks later after the first. I ride there and get 2nd again. Then much more practise, more practise, no work, only practice. When his father was not there I practise all of the time. I ride at this time the Derbi 98. The Derbi 98 for me was the best motorcycle in the world inside the small place and also inside the football stadium, when you play on the moto with the football. It very good for this.

At this time many others ride with Derbi. Also some ride with montesa and ossa and they are not like Derbi. Then the 3rd Gymkhana, win, then the 4th 5th 6th 7th.
I was like a professional in Gymkhana. There were events almost every week and then when I stay with Francisco Domas, everywhere about me riding, then one competition came that was motocross. This was motocross where each rider is started every minute. This event happened here in Martorelles in a street 200 yards from this house.

This was the place motocross for me in Spain. Francisco decided that for this competition he would make one special motorcycle for me with a 175 cc engine. He makes a new cylinder and a new gearbox which was similar to a 98cc but special. Nobody know me and then at the start 5, 4 3 2 1, I start and go. The race had to do laps of the streets and paths around here.
1956 and Pere competes in a road and dirt based motocross on the streets of Mollet. Here are the same steps today. Even today this area is rich with motorcycle tech and industry.
Some have engines bigger than me. I win and after the win Francisco who I race with and beat say he will prepare the bike for me. I win and he gives me his bike to ride. This is where my history begins in motocross. I win and win and win and win.
Delfin Coll, Robert Mary, Simeon Rabasa and Pere Pi at the motocross del Fang de Vic. 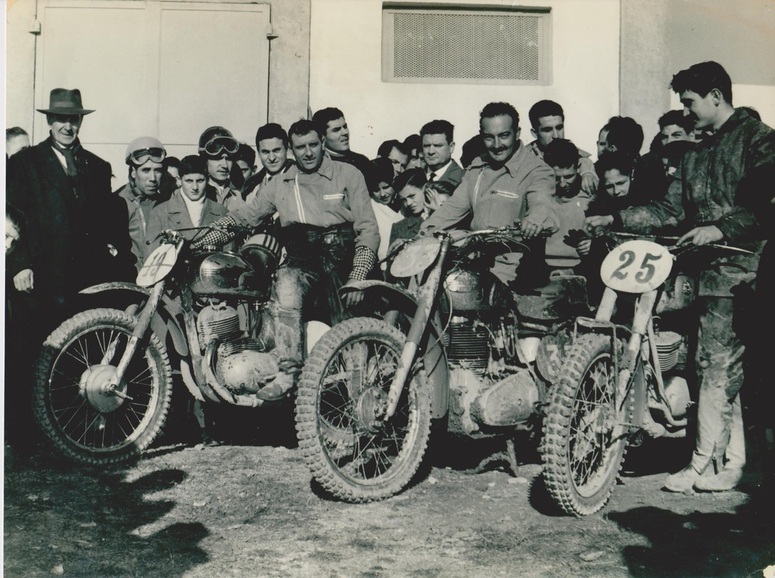 2014 Pere Pi Interview www.retrotrials.com
Pere had great success in motocross with Derbi in 1958 on the 175. 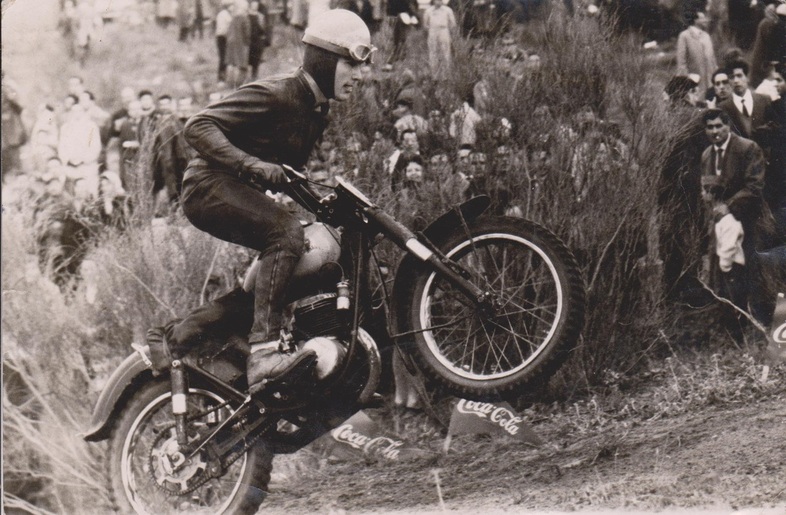 2014 Pere Pi Interview www.retrotrials.com
1955 and 1956 were the years where Pere started to experiment in riding different disciplines. As well as motocross he competed in motoball, Gymkhana, Endurance rallies and speed events and this is before Trials even existed in Spain.
A nice photo of Pere with his Derbi 350 Motocross machine. 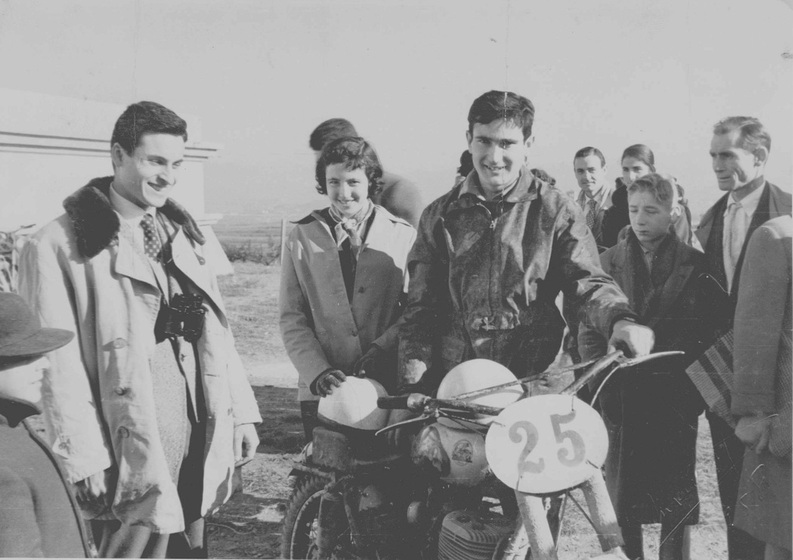 2014 Pere Pi Interview www.retrotrials.com
A great photo of Pere with the Derbi 350 moto. Note the "PI" on his crash helmet. 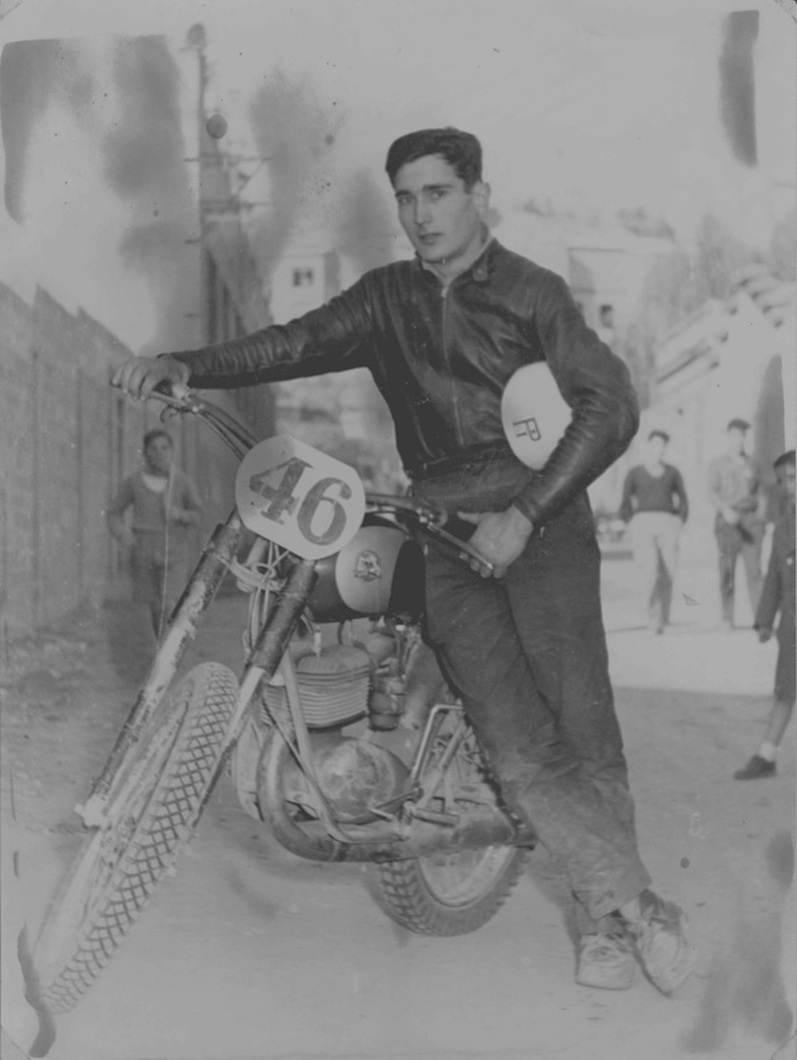 2014 Pere Pi Interview www.retrotrials.com
Andreu Basoli and Pere Pi both get class 1st place at the motocross de Granolles 1958 in front of a large and very well dressed crowd. 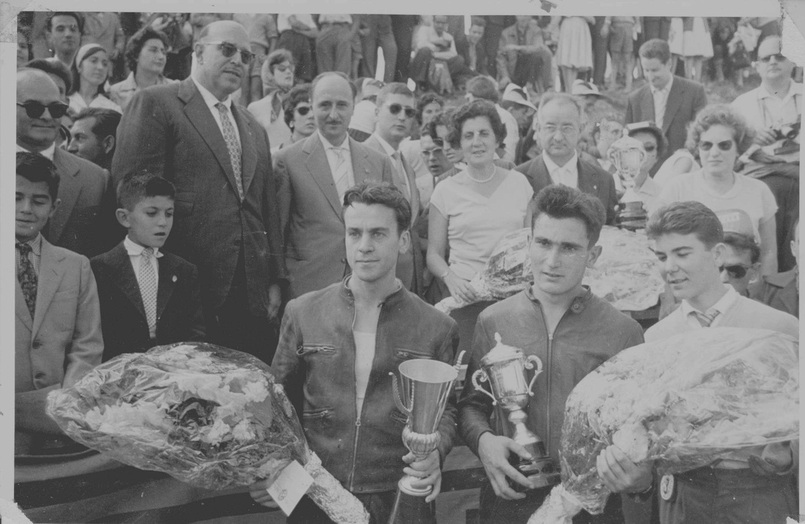