A detailed interview with Oriol Puig Bulto + full access to his photo gallery and Trial records.
My two brothers are worked at this textile company but I liked small motorcycles and my uncle, the founder of Bultaco was Paco Bulto. He was also my Godfather and at my baptism he talked to me. He told me "Hey look Oriol. Seeing as you like motorcycles when you finish your studies I propose for you to come and work for us and for Bultaco". Before my christening he was working with Montesa motorcycles and at the time when I was studying he arranged for me to come to Montesa in the afternoons in between my studies. At that time the place where I studied was not called the Polytechnic but I was studying engineering in the school of Barcelona .At school we had classes in the morning and then in the afternoon we prepared projects etc ,  so my Godfather proposed for me to go to the Montesa drawing office for some practice and to gain some experience . I remember for example studying hundreds of connecting rods. 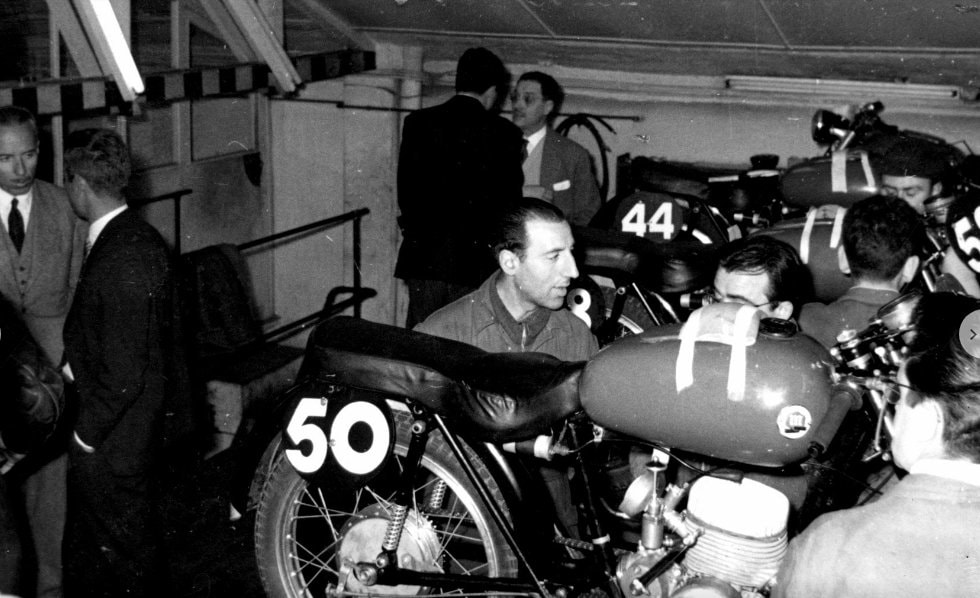 A detailed interview with Oriol Puig Bulto www.retrotrials.com
I remember one year he was testing many different lengths of connecting rods and crankcase structures to look for more power and different power delivery so really it was clear from the very start that my World was for motorcycles.  My mother at this time was a housewife because there were six children and much to do at home.

Which Montesa factory year did you work at when they work in the afternoons ?.

I was working at the design office of the Pamplona factory Montesa.

Oh yes Joseph and I went there two years ago.

Really ? . What is happening there now ?.

I remember that it was 1946 in Calle Corsega that Montesa started. I remember from this factory when they were racing at the Monjuic park my cousin Joan Soler Bulto and the Mila brothers were riding from the Corsega factory to Monjuic on the streets brooooommmmmm.  There were no silencers at that time. This was no problem. I liked to go with my uncle  Snr Paco in his Bentley motor car. 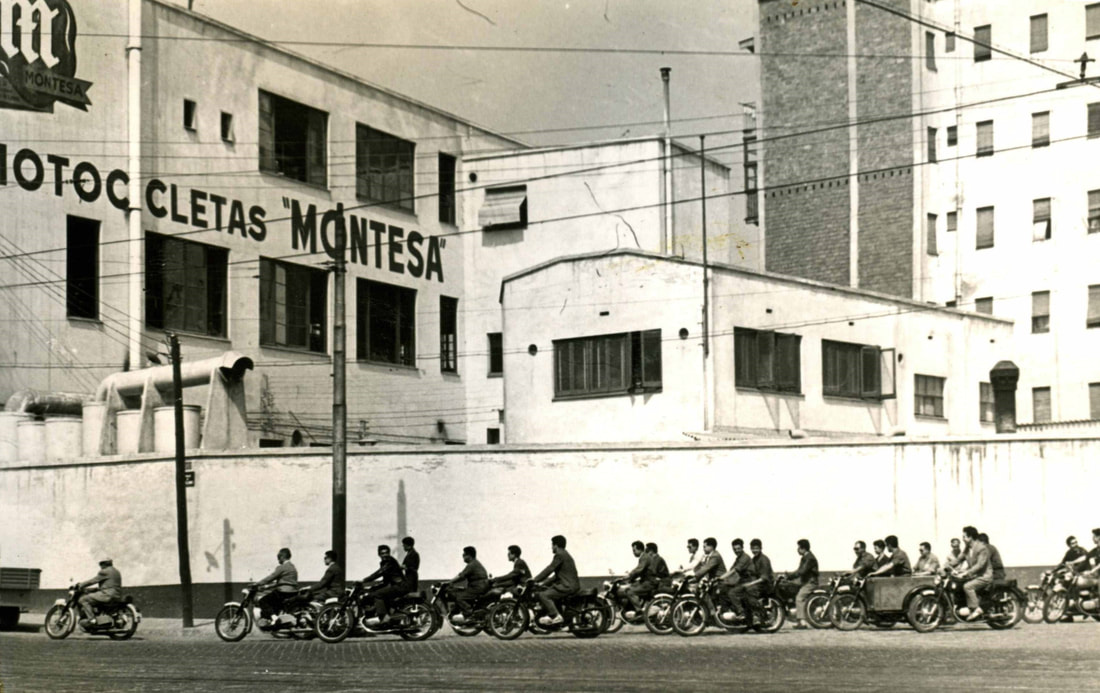 A detailed interview with Oriol Puig Bulto www.retrotrials.com
So i went from the factory to the circuit , but when i went to the factory to make the drawings this was at Pamplona. But i have not been to this place since 50 years ago.  You 2 years ago , so you know better than me. I remember Pedro Pi told me about your web page. he called me. Because Pedro and me were very much against each other in the competitions. You know today there is huge competition between the fans of  Barcelona and Madrid ? . Well at this time this level of competition was the same between Bultaco and Montesa. In fact there was a motocross at Esplugues and the workers of Bultaco and the workers from Montesa were discussing who they supported at that race. The Montesa workers supported Pedo Pi and the Bultaco workers supported me and they had some fights ha ha . I remember at this time we had some difficult times because of the competition but these days we communicate a lot between us both and the family on email and whatzapp. Pedro also now is a super speratist and is supporting the independence of Catalonia and every days sends me information of this campaign.

You know that i am a member of the FIM  as the director of the technical commission.  I go to technical seminars as part of this role in different countries when the seminars have been in Spain they have been for the last 5 or 6 years at the Circuit of Albacete.
This was awarded to me after 40 years working with the FIM technical commission 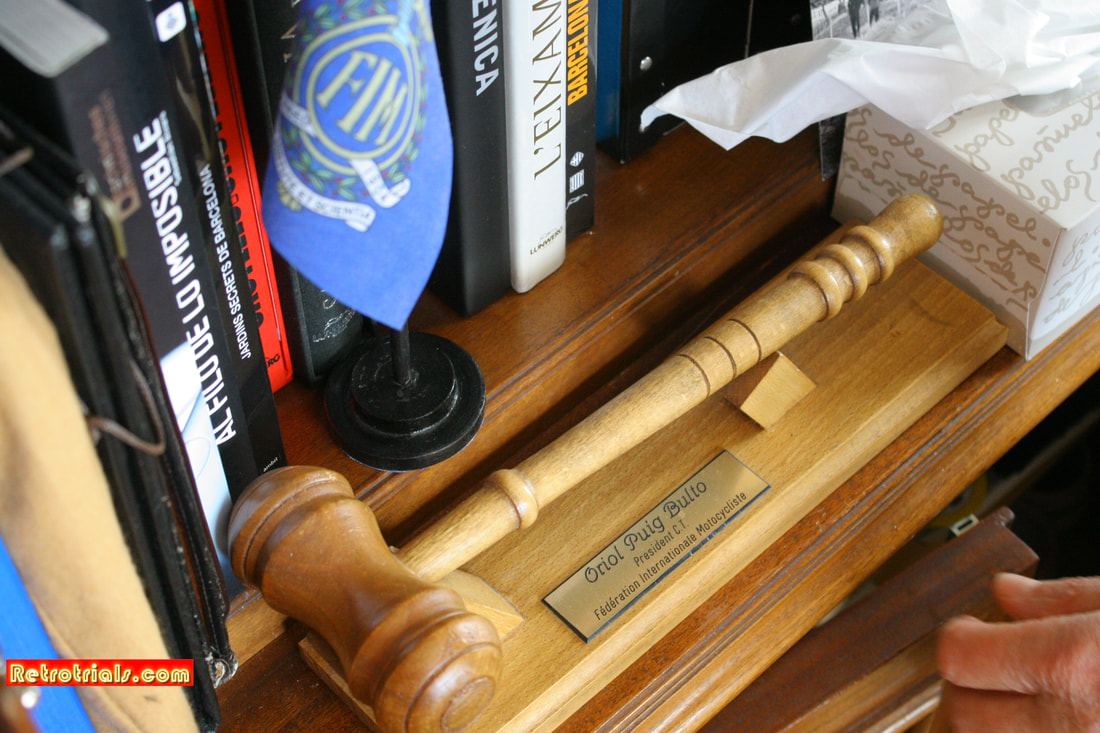 A detailed interview with Oriol Puig Bulto www.retrotrials.com
So what age did you start drawing for montesa ?

​I think this time was two years before my uncle left Montesa and I think this time was 1957 or maybe the year before so I was 21 or 22. I really spent  time in the drawing room gaining as much experience as possible and working with the other designers. I was not paid for this it was just some practice the school of industrial engineers at this time. Then afterwards, if you do the doctorate it was very very long and it was certainly many many years of studying.  Now I think this is superseded  now through the school in industrial engineers, and the time spent studying is five years only ,with more time after to complete the doctorate.  At that time it was very long. It was two years before entering the engineering Industrial School and if you succeeded then you spent another 6 years at the school so it was 8 years. But then the  advantage of getting the Doctorate wasn't very simple to get. Back then because you could modify your project from the project you used to become an engineer in industry. So for just a little bit more effort and studying we got the Title of Doctorate without much more time studying .
Oriol laughing at the Montesa with his now friend , but then fierce competitor Pedro Pi . Is he laughing at the crazy rear sprocket  ,or the material side panel , or the rudimentary thin chain guide ?
Despite even race side fighting between the Bultaco and Montesa spectators , the 2 riders right in the centre of it maintain a good friendship then , and to this day.
Page 4