A friend of mine noticed that in 1990 you were a spectator at the World Trial in Wales. Can you remember why this was?

Arrghh yes, it is because I do not have the age to ride the World Trial. This was difficult for me because at this time there was no junior class, there was just one class. I am only 15 years old and I ask the FIM Federation if it was possible to make the races at this age. They say no, the minimum age is 16. We make one paper and go to all the riders and ask them to sign. Jordi Tarres, Diego Bosis, Thierry Michaud, all of this to make this signature to see if they agree that this might be possible for me to ride. All the riders make the signature but not Thierry Michaud because he say I cannot make this because after one day another rider want to make the race, I have to say yes as well. I prefer not to sign. The Federation at the end they say it’s not possible. The only thing that they say is that you can make Spanish GP only. I make the GP out of points, with no award, just ride. But for the rest of the races Montesa tell me it was important to go there and train and see with the riders at this Welsh Trial and see how things are at the trial. To get the …knowledge.
Marc started his riding career on the Montesa 310, but rode mainly Spanish Trials at this time.
In your first year of riding the Montesa, was everything through Km.2 or did you get other sponsorship?
The first year that I was professional was then I was 15 and I rode the Spanish Championship like this. After when I am 16 I make the World Championship and my main sponsor was Ducados. Although I love Km.2, afterwards I had to move to the main team to have the finance to make it possible.

So you started with Montesa in 1990, did you help to develop the Montesa when you joined?
Marc Colomer competed in the World Championship during 1991 on the Montesa 911 prototype 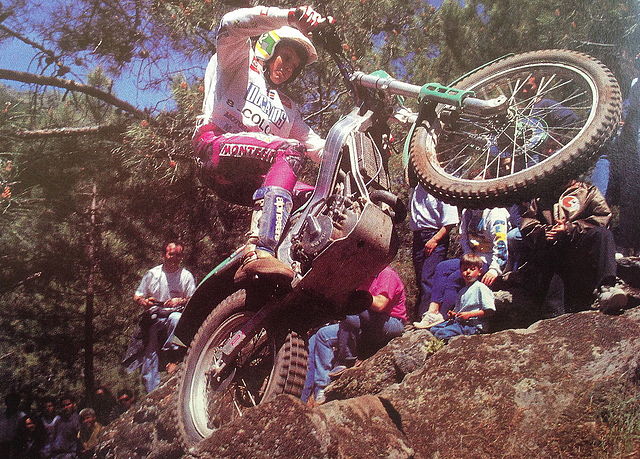 2013 Marc Colomer Interview WWW.RETROTRIALS.COM
1991 on the Montesa 911 prototype
Yes, the first one, the first bike, I develop was the 311. This bike was red but the prototype was green as this was the same colour as the Montesa 310, the model before. Then I help a little, not much, because at this time I not have a lot of experience, but at this time I help a little to develop this bike but errrr the rider at the moment, the rider who develop this bike was Gabino Renales, he really spent the most time developing this prototype.
When did you start practising with Jordi?

Never, no, I never practise with Jordi.

Who did you practise with when you start riding the Championship Rounds with your sponsorship?

Now, it is normal for you to go with the other riders, but at this time it was not normal. All the riders went on their own, not the other riders. Before the race yes, at the place of practise at the trial but at home I train alone around my home and Jordi train around his home but always alone and not with other riders. 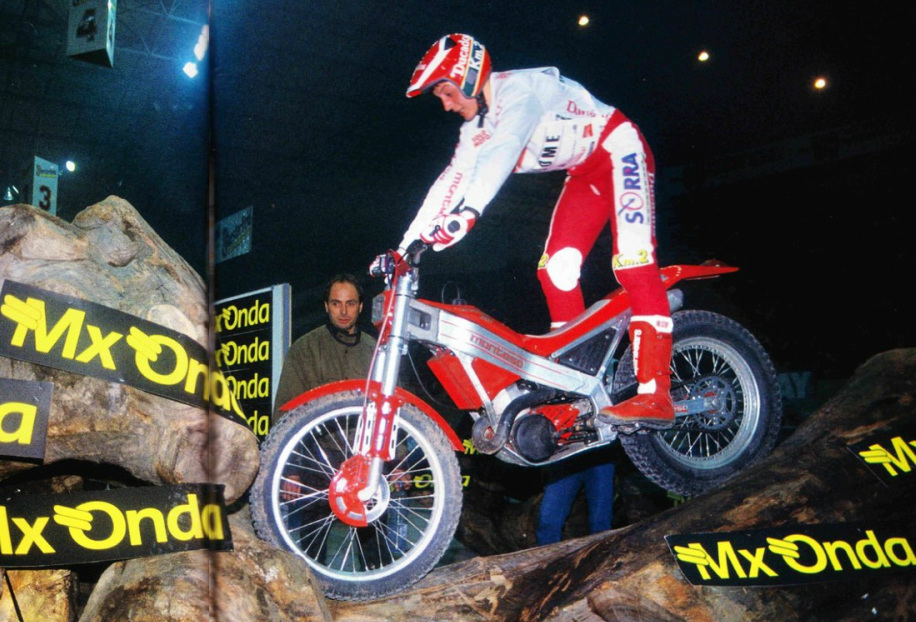 2013 Marc Colomer Interview WWW.RETROTRIALS.COM
Was there any reason for this?

This was because sometimes at this time you think you can save some secrets from the other riders and not see you with special parts fitted. Also you can arrive at the races and you have improved your riding and you now surprise the other rider which helps you. If you ride everyday with your competitor at the end he knows all of you very well, and this is not good.

The Spanish public called you “el Prodigo” at this time. Did you feel pressure as the Spanish Trial loving public expect you to be the next great rider and the next Jordi Tarres?
Marc on the 311 Montesa speaking with Montesa's Miguel Cierra
No, because in Spain this is normal ha ha. When they see one rider in Spain making good result they very soon give this rider this word, it is not strange here ha ha.

Did you ever suffer from any nerves before the trial or anything afterwards?

No …. I have not always, but sometimes I have bad headaches before the trial and sometimes afterwards. This was not unusual for me.

The Indoor Trial at this time was only by invitation and then normally at the good Indoors it is the first 5,6 or 7 top riders. At this moment this was not my case ha ha. This was my reason for not going there at this time.