This framed poster of Jaime was on on the floor, leaning up against the wall of his office. 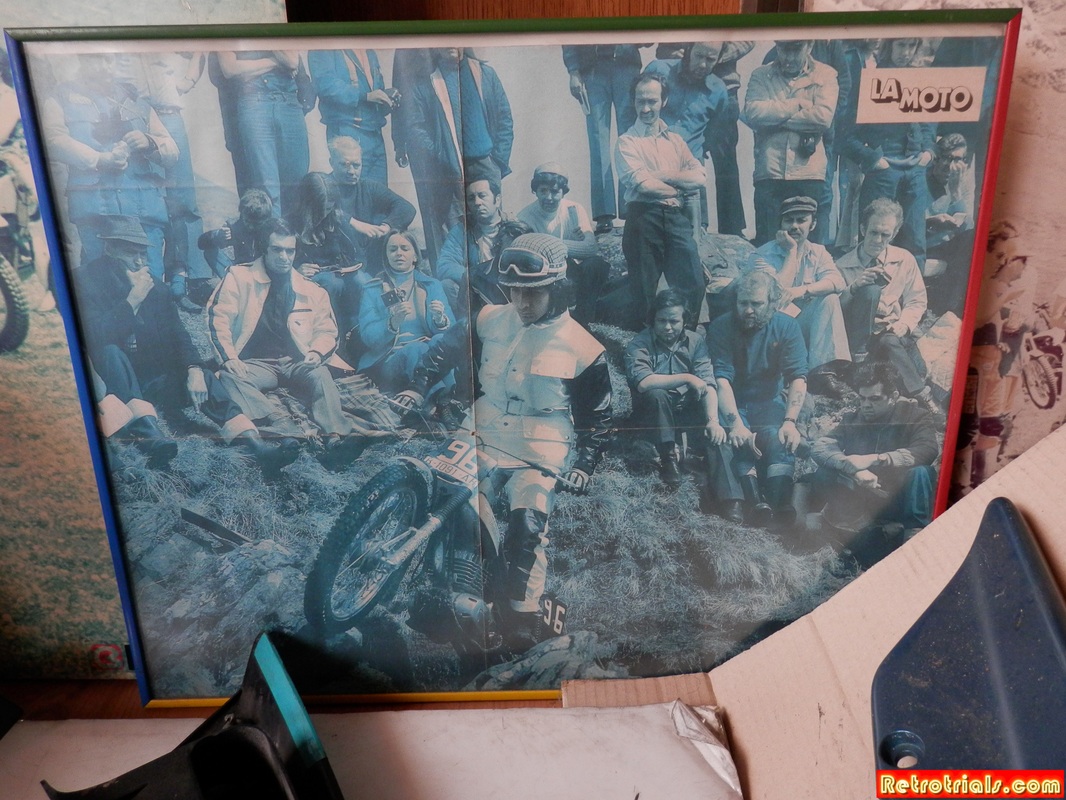 I have many friends in the trial. Trial mans are very kind persons. In speed races or motocross, sometimes there is punch and hands ha ha. Sometimes it is not a good relation. Trial riders always have very good histories with people from other countries and they help us. We were friends, you know. It was more important to be friendly than to be competitive. It was very nice for the trial and for the riders.

I’m too young to have watched you riding ha ha but when I look at the photos of you riding you always looked like a guy who was very relaxed and friendly. You looked like that in the photos.

Oh everybody was like this, for example, Manuel Soler was always fighting to win the races you know. He win much more than me but still today we are very friendly.
Manuel Soler and Jaime at Bilstain, Belgium and later in 2014 enjoying an unusual Spanish Classic Trial trial in the snow with Lluis Gallach.
When the crisis in Spain started some years ago and stopped Bultaco and stopped Ossa, at this time we started to get problems with the factories because they do not have a lot of money. So Manuel and me got the World Championships together, but the factories do not know we go together because the factories no like ha ha. He was Bultaco and I was Montesa. We go the World Championship together but big problem because factory no like, but it is what I say you know it is much better to be friends than …….. The competitive was always there because I like to win and still the last the last trial I ride everybody who go for riding like to win  but not everybody can win, so after I think it is better to be friendly you know because otherwise … no chance 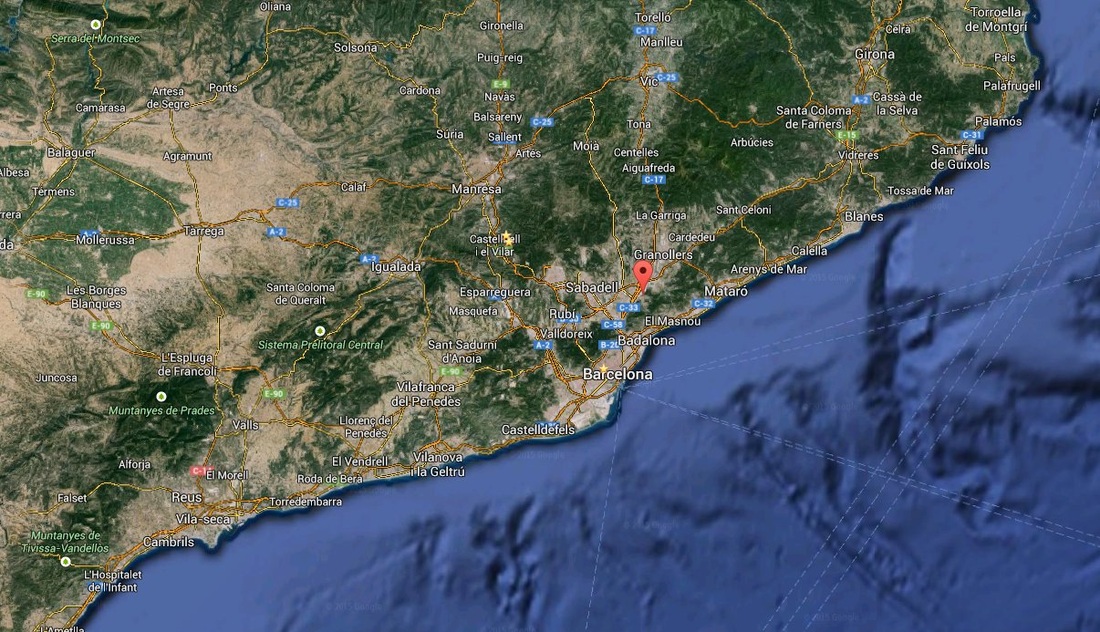 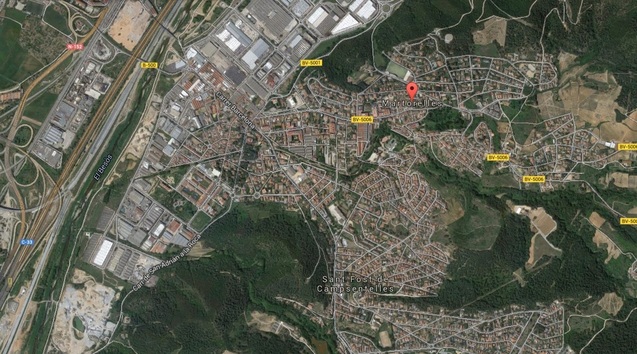 2015 Exclusive Jaime Subira career Interview www.retrotrials.com
Yes, all of my life. I was born 1 kilometer from here and all of my family was in this country and we are very close and we live all of our lives in Martorelles. The town next to here is Santa Maria de Martorelles. It is like Marttorelles, but is 2 kilometers from here.

Is this area now very similar to how it was back in the 60‘s when you were growing up? Has it changed a lot?

It has changed, but not a lot. This street ends at the next town and you cannot travel further by car. By trial bike yes, because there are very nice mountains there but what I mean is that it has not changed a lot. It is very near to Barcelona and is near the mountains. All these mountains are a national park so it is protected and it cannot change. This town no change a lot. 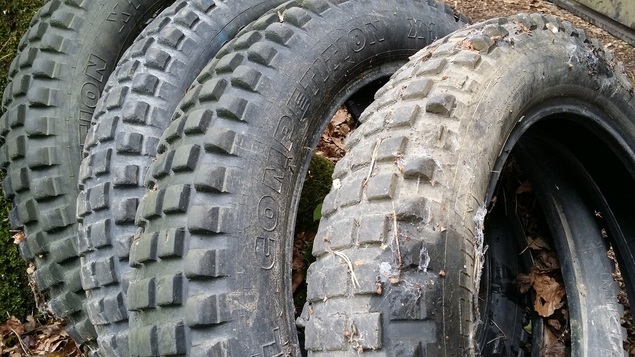 2015 Exclusive Jaime Subira career Interview www.retrotrials.com
This town has the big factories at the bottom of the hill?

Yes industrial town. This is an industrial area. All of this country, I mean this area is called a Cinturo industrial Barcelona and I think this is the most industrial area in the whole of Europe. Near here is the place that all of the transport goes through, all of the international transport comes here about 3-4 kilometers from here. After then the products are taken on their travels to all the places in Spain. We have also the port in Barcelona so this area is very important.

So everyone who works here is connected with industry?

When you were growing up, were there a lot of motorcycles around here?

They were different motorcycles because some years go only the rich people could buy a Japanese bike or Ducati or Bennelli or something like that but trial bikes everybody can buy so there are many many many trial bikes and most of them they are used on the street not to ride in the mountain.

They are used just for the transport. My bike was the Montesa 247. I used to go to work and at the weekend I take the front light off and make trials, you know ha ha. So I use this bike for everything ha ha work and play at the weekend.
These road worn tyres are a typical example of the tyres found of Spanish Trials bikes. 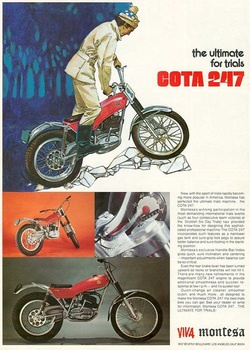 2015 Exclusive Jaime Subira career Interview www.retrotrials.com
My first trial I was 17 years and until you are 18 you cannot get a driving license so my brother drive the bike on the street and I was sitting on the petrol tank. Police stop us and tell us off as we do not have a rear mirror, that is all ha ha. I say we go and ride trial, we no need mirror.

And did you play around on the push bikes as well, the cycles?

Yes, yes, I had a cycle when I was a child. My father when I was 13 or 14 years he drive a small truck for work  and where ever he go for works and looks and sees an old motorcycle that is dirty and no work he asks the people he what you do with this bike. He then put it and takes it to my home. After I start to ride it this old bike until it break. So from a very early time, I think 14 I started to work as a mechanic with cars and I like very much to work mechanic and my father knows and my father take some many many bikes, old bikes

What did your father used to drive around in the truck?

Chemicals in the truck