Please remember - the interview is in blue text and the editorial is in black text.
﻿This is how the conversation went and developed in the interview.﻿

As you read this .....you are reading the words unedited. I recorded the whole meeting on my dicta phone and have typed it out word for word so that you get the full story and understand Pere better. This also means that what's written is not my interpretation, it is direct from the horses mouth (That will confuse Foreign tongues when run through Google translate :) )
This is a present for you James
I’m sorry, lots in Spanish, but it is all of my life from when I begin as a child. I had a great bad illness that I suffered much with. Then when I was aged 14, I work at Derbi motorcycle, before this I worked with Jordi, his uncle is director of Derbi, then growing growing growing and getting older.

Thank you very much. You have been a very busy man, I have read about you. There’s no doubt about it, you’ve been very busy.

Some days more than others ha ha.

One thing I must tell you when I ride I am young. At this time I am called Pedro. Pedro is Spanish. Pere is Catalan. You know in Spain we have dictator, Franco. After Franco is dead, I change the name to Catalan. My identity card is Pere.
﻿Were you born in this area?

I was born and have always lived 40 kilometres from here, near to Barcelona.﻿

How did you get involved with the motorcycle?

Because I begin working at Derbi. I explain because it’s complicated. I begin also in a small village near Derbi, then I have a problem with my health because I am nearly dead and then I am growing up and when I am 13 years old I am ready to work because my father no have any money and he has nothing.
This is the only picture of the house in  Llica d'Amunt, Barcelona where Pere was born on the 12th of June 1940. This picture hangs on the wall of Pere's and Maria's house. 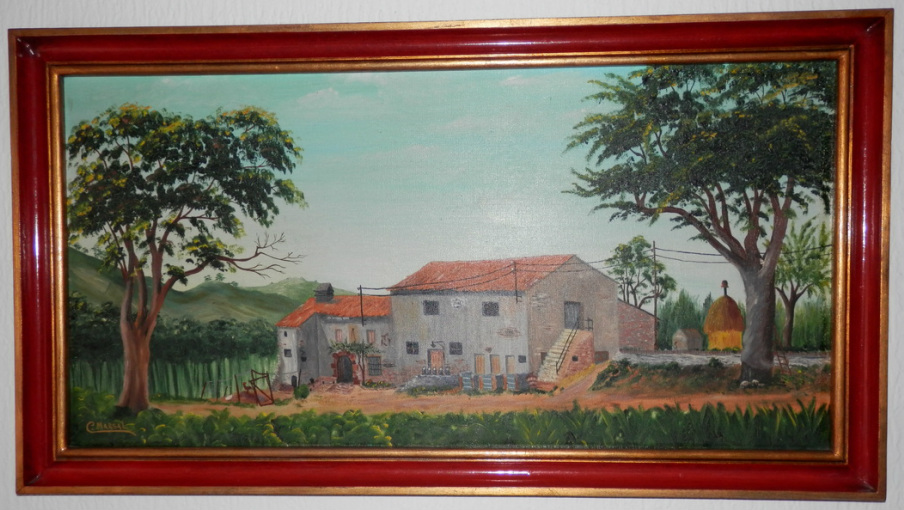 2014 Pere Pi Interview www.retrotrials.com
Derbi was founded in Mollet de Valles, 12 miles from Barcelona in 1922. Founded by Simeon Rabasa, Derbi grew to become one of the largest manufactures of cycles in Spain. In 1946 they started work on a powered version supported by the revenue of the cycles. The new company formed to manufacture the new cycle framed mounted engines was called "SRS" Simeon Rabasa Singla.
Derbi grew and grew producing predominantly small capacity engined motorcycles. Never the less they became arguably Spain's strongest and most successful motorcycle manufacturer of the 1980's and won many many World Championship titles.

The Derbi factory is so huge that it has morphed into the small town of Mollet. The office and administration walls stretch along the entire town centre streets and have recessed shops within them. The iconic Olive wreath sign stands today proudly above the town but is a reminder of past days. In 2001 Derbi was bought by the Piaggio group. Today Derbi are manufactured thousands of miles away in the Italian Piaggio factories and sadly the Derbi factory closed for ever just before Christmas 2013.
These 3 photos just show a small proportion of the Mollet Derbi factory. At the end of this report I will post a link where you can see many many photos from 2013 when I was lucky enough to look around.
"A view from inside the factory grounds ". The now closed administration buildings of Derbi where Jordi Rabasa's father Pepito was one of the senior managers with Pere as his run around.