It's what we realised because at the start of the 88 season I had the best bike, because the yellow 303 was the 100% proto-type bike and we had a fantastic engine and a very good and totally different frame that the series of the standard bike. Me also I knew that if I also wanted to stay as the best rider I had to try hard with moving the bike, going back and jumping the new style and this I have never been the best and natural rider to ride the kind of modern trial acrobatic trial like Jordi Tarres at the moment or Diego Bosis. If you prefer to call this old style, I still have a very good throttle control and smooth style but when I had to move and to jump and to move the bike, to move the front to make some jumps and so and so I could rider very well because in 88 it had been a very incredible season. 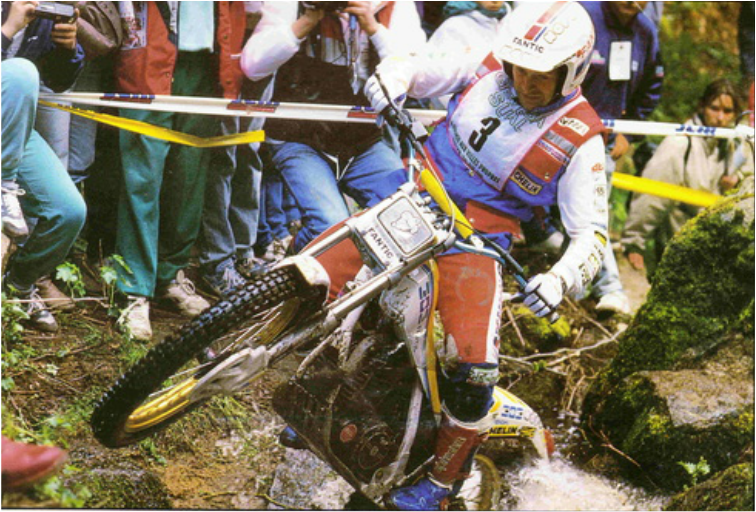 2014 Thierry Michaud interview www.retrotrials.com photo Eric Kitchen from the Bainbridge 89 Programme
At the beginning of 88 a new Spanish opening of the World Championship happened and I won and I had a very good start. Jordi Tarres had some difficulties to realise and I was then coming back then. This was quite a strange situation and interesting from outside and very nice for me but very hard for Jordi at the beginning. I now continue if you want ….it is very easy for me, at the 2nd part of the season the situation was exactly the opposite.
Jordi Tarres come again at the top and me I had some bad and we arrive after 11 rounds. This is the only time in the story of the World Championship that after 11 rounds we were both totally at the same point. We were totally tied. We had the same number of 1st place, the same number of 2nd position. Exactly in the same condition. Exactly like if we had ridden 11 events or nothing. We just have to go to Poland to ride to decide who will be the World Champion. It was quite a strange situation and quite a stress situation for me and Jordi and Fantic and Beta but it was quite interesting for the spectator.

What do you remember about that event ? What gave you the edge the advantage at the last round to win?
It was very hard but it was very easy. On Saturday the day before it was Jordi Tarres birthday, then I come to see Jordi Tarres and to tell him Happy Birthday and the day after, because Jordi Tarres is born the 10th September and me I am born the 11th September, I am 3 or 4 years older than him. Even the last round in Poland it was 11th September, my 25th birthday then I come to see Jordi and I tell him if you want to give me a present tomorrow you know what you have to do.  Ha ha ha ha ha   and he did.  I laugh but it was the case.
I have a very good relationship with Jordi Tarres, I appreciate him and I have a lot of respect for him and the riders also and he have a lot of respect for me and we really had a good relation with Jordi. We were totally different on the bike but we really appreciate ourselves and each together. But more seriously, it's very easy, Jordi Tarres and all his team and so and so, they thought that it was evident that he will won because he was before me the last  4, 5 or 6 events he beat me, it was evident that he would beat me again in Poland. I was almost World Champion but it was not finished. Me in fact, I felt that it was almost finished but but but it was possible to win. And we ride quite striking, and so and so, at the section, I don't remember but it was 6 or 7 section, he had a five and me I have a good I don't remember 0 or 1, and at that moment he realised that he could loose, he could loose. And it was a possibility for him to loose, and from that moment he struggle a lot, and he ride not very bad as Eddy Lejeune in 86, he ride not so well, and me I ride very hard .
Thierry being hoisted on the shoulders of his brother Fred. An overjoyed Dr Agrato stands in front. 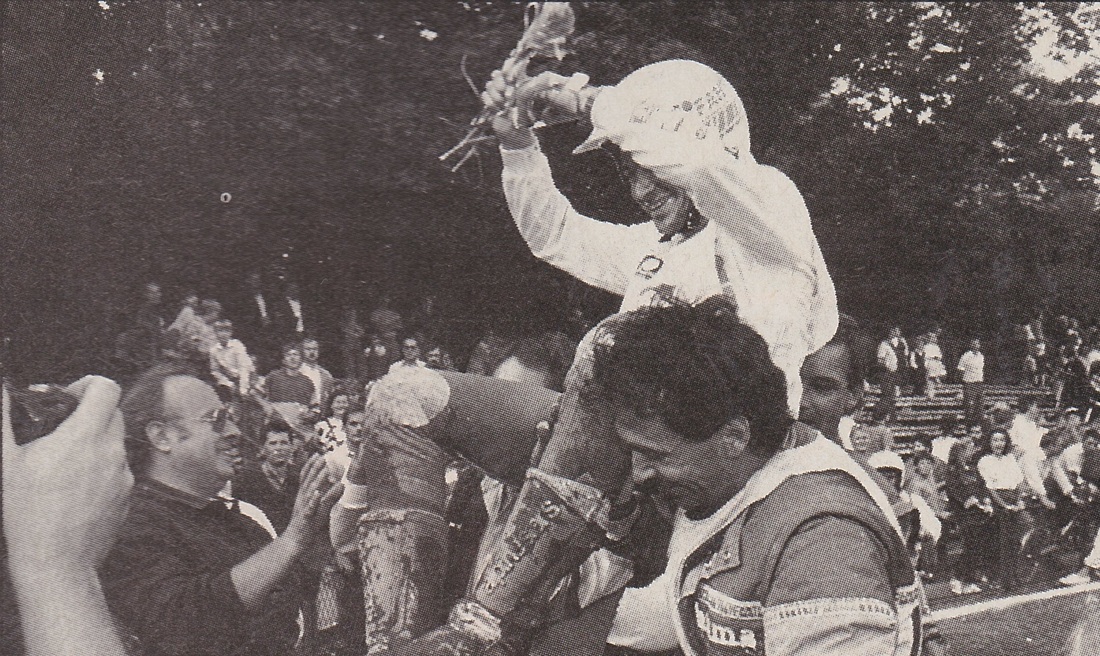