With the last round in Finland many many things happen, cos I remember Eddy Lejeune finished in 13th position. I don't have the right name but it destroyed his mind. He had a very big physiological trouble and he finished very very bad position and me I did the opposite, I was soooo ..... I really want to win and to show that I was the best and I ride very well and I was very strong physiologically and I won the easy, that  event and I finish the World Champion, Steve Saunders 2nd and Eddy Lejeune 3rd. 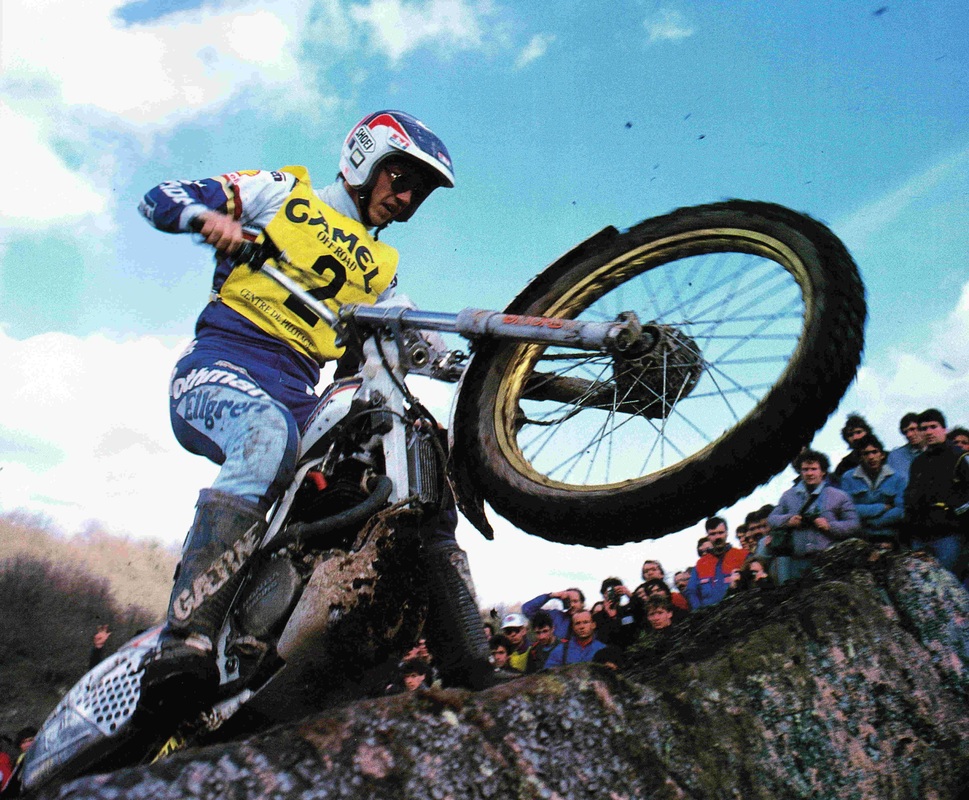 2014 Thierry Michaud interview www.retrotrials.com
It was quite a controversial time ,wasn’t it ?

What do you mean controversial ? You speak about .....

I think you have answered the question and covered the subject perfectly so we will move on.

I mention this, as coming from England obviously everyone thinks what if what if maybe this should have happened maybe that should of happened, but the people in the power, the FIM, made the decision and no body else and they gave you your points so it's all written down in history so we can't re write it know so we'll move on.

No, no, if you want me I talk about it more but like I say a few minutes ago I don’t want to re write the story. I can tell you that I was at the appeal and during the appeal the FIM realized that the jury make the wrong procedure to disqualify me, the jury in Germany I could explain but I don't want to give you these details.
I think I have been very honest with you, as I told you, you know it’s not a strange situation, you know 30 years later I am a director of the FIM and everybody think I try to when I speak about the past, the past was perfect, I was good you know many old persons always explain the past or my past was perfect. Me I say look, I am a director of the FIM now and when I was young I made some trouble when I was young I fight many times against the marshall and I was wrong to fight. For example, in Germany I have a very bad behaviour with the marshall. I probably did not have a five. There was a video that demonstrate that  the marshal was wrong. But it’s a normal situation that the marshal could be wrong. This was not good.
I accept that my behaviour was not good. For the story, normally they just has to decide to give me a big penalty not a disqualification because it was not the correct to do so disqualification I should just get a financial penalty. The jury, I know the reason, but I don’t want to say. The jury decides to disqualify me and the FIM change and just put the right decision in order after not. Now all of the persons who were on the jury had less personality and they decide that they do now to punish you but we give him again 2nd position. It was 17 points and they give me back the 17 points. If I take all the money I pay I think it is about 20,000 euro. It’s a big amount. Now if a rider, a World Champion rider pay one the 20,000 euros. It's now about  500 euro hey. It's big big big big money I pay. This was normal but if you have to speak 30 years later than 1986 but after from a sporting point of view it was totally clear that I won this World Champion. Any way this is the story.