﻿There are certain World Championship riders that each one of us hold an affinity with. For me, Gabino Renales is one of them. From a normal upbringing in the industrial suburbs of Barcelona, Gaby lived in an area that was simply bursting with motorcycles and flourishing with trials talent. It was the very heart of the Catalan trials World, it's just that they didn't know it at the time. Gaby started his riding career  adopted by the all encompassing JJ Cobas racing team headed by entrepreneur J Jachinto. He first piloted a yellow Ossa Tr 33 aged just 17. Gabino displayed the quality that got him noticed. When the Ossa company went bankrupt due to the Socialist industrial disputes he joined the relative new comer Merlin riding the Dg 350. As Gabino became better known on the World stage, in 1984 he drew the attention of the experienced rider and Mecatecno boss Jordi Rabassa to pilot their first adult trials motorcycle, the MR326. Difficulties with the factory emerged and so did a huge crisis of confidence leaving big questions.Then in a twist of fate Gasgas emerged from the ashes of Bultaco and SWM. Gabino's career went from strength to strength culminating in the 1987 Belgium World Trial win.

However, none of it was plain sailing. None of it came easy and there were huge hurdles to over come.

Gabino gives a detailed and revealing insight into his life, his riding, the factories and his inner thoughts back in the 80 's.

A classic retro story for me, an iconic figure.﻿
We agreed a time but I was to drive to central Barcelona and then telephone him when I was 10 minutes away from a certain road. It was all very clandestine and secretive. The next morning I awoke to heavy rain storms and flooding. The journey to central Barcelona is always very very busy with traffic jams, but this morning was made even worse by the weather. I sat stationary on the dual carriageway looking down at the clock, just watching the minutes tick closer to our meeting time........and I wasn't going to make it. I kept in constant touch with Gabino whilst on the road and tried to describe where I was, but the meeting time came and went. Thankfully Gabino was patient and when I was a short distance away from the road in question I telephoned him. It was here when reality morphed into a scene from the Bourne trilogy. Gabino was talking me into the location and giving me corner by corner directions. The rain was lashing down, the window partly misted up, my wife firmly saying "slow down". It was turning into a real nightmare where I was covering half a mile in half an hour. The phone cut in and cut out, I was losing connection and to boot, my phone battery went dead as it was running the sat nav as well. A quick change of battery and few trips down one way streets the wrong way and I was stressed......but I couldn't show it and "NO" I couldnt slow down :). Gabino said "You are nearly with me, I am in the silver jeep". I sat at the junction in the pouring rain and out of nowhere this silver car flashed his lights at me and pulled in front. I caught enough of a glimpse of the sole occupant to see it was Gabino - phew. I'm nearly there I thought. I followed the car for a mile whilst still in phone contact. We then started driving down this tight one way Barcelona road with a Cola Cola cafe on the corner. Gabino said "You can park here and we'll met at the cafe" pointing out of the window at a space only big enough for a smart car. No chance for me. The rain was lashing down so my wife refused to get out, like a horse stalled at a jump. My parking location was a little dubious so I left the keys with her just in case the inspectors were on their rounds, then I leapt from the vehicle darting from shop awning to covered doorway trying my best to dodge the rain drops. Finally I was there .....in the correct Cola Cola cafe for the long awaited and HIGHLY anticipated, most difficult to secure interview EVER !!! :).

I was alone, waiting for Gabino, so I ordered coffee, but arrgghh my wallets in the van. The wonderful lady said "Don't worry" and I sat down ....moist from the down pour with a steaming Latte to breathe some life back into me.

Then, in walked the man himself shaking off his umbrella and leaving it by the door and I finally got to meet Gabino Renales. It brings a smile to my face typing it up now :).

You know something !. I was a little star struck. It sounds daft, but I'm just being honest. We had a short chat and it was clear to me that Gabino was a great guy to talk with. Friendly, very open, level headed and very eloquent. It had most of the hallmarks of being a great interview .....and I wasn't disappointed.

As always, this interview is typed up word for word. This way you get the real interview and not some regurgitated version.
The words of the interview are in blue. Any editorial is in black.
Where were you born?

I was born in a city called Badalona which is attached to Barcelona and I was born here. I was brought up in a small town called Sant Fost de Campsentelles, which is not easy for you ha ha ha but this is near Mollet in the mountains and actually is the place very near the Derbi, you know the Spanish factory which is in the small place called Martorelles. You know, I grew up there and that’s why I started with trials. This is where I was brought up and where my parents are today.
Gabino was brought up in the very crucible and the very heart of the Retrotrial and modern day Trial World.  There is no more central place in the Retro Trials World than this map beneath. 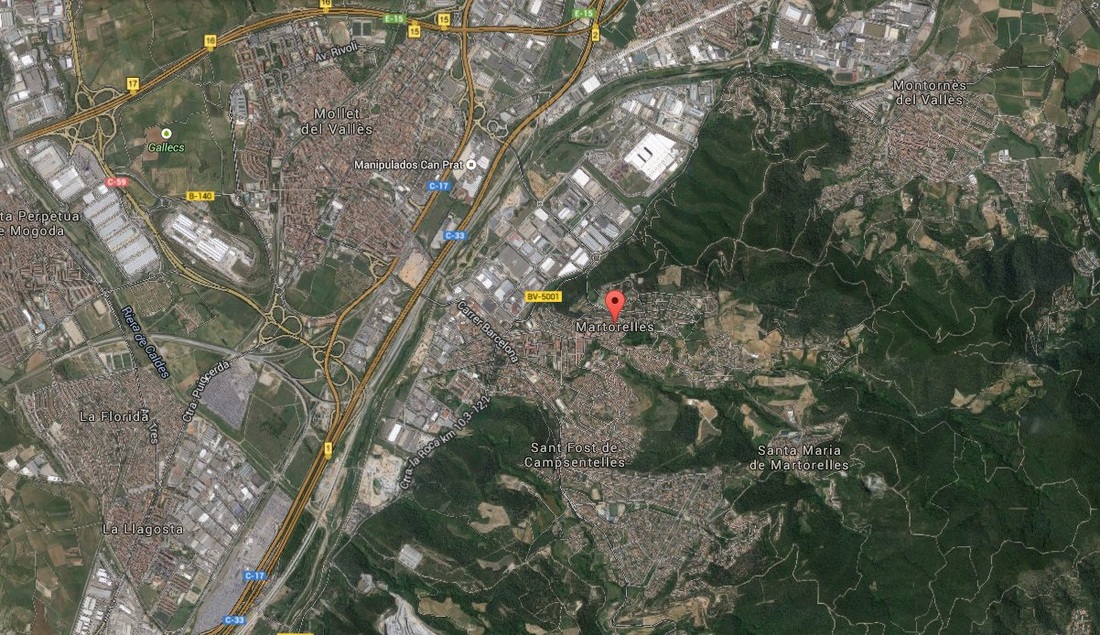 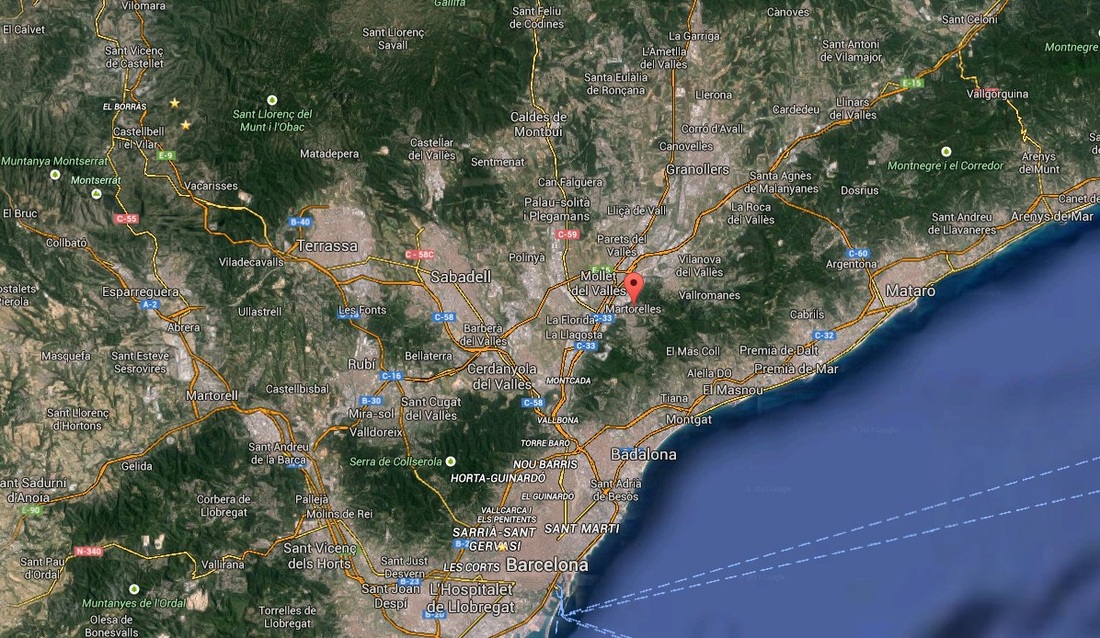 WWW.RETROTRIALS.COM Gabino Renales Interview Photo Google
He was very very very active in the area and also on top of that there was a guy who started locally on the trial called Jaime Subira.
So Jaime Subira was born in Martorelles and so locally there was a very nice atmosphere for trials around here and I was around  20      years old and I started to see the people doing trials. By coincidence Jaime Subira started to go out with my neighbour just in     front of my house, a girl who he started to fly around with on his bike on Sunday in the afternoon after the trial, just on the streets
around here. Then this was the way I started and my first bike wasn’t a trials bike at all it was a Ducati Senda.

A Spanish Ducati I guess and then I changed to a Bultaco Sherpa 74 etc etc. This is the way I started. It was influence from friends, Isern, Subira and some other people in my town.

There was a guy who I started with, his name is Salva Garcia. Salva was Tarres minder for many years. He is from near to me.  We were very good friends when we were young.