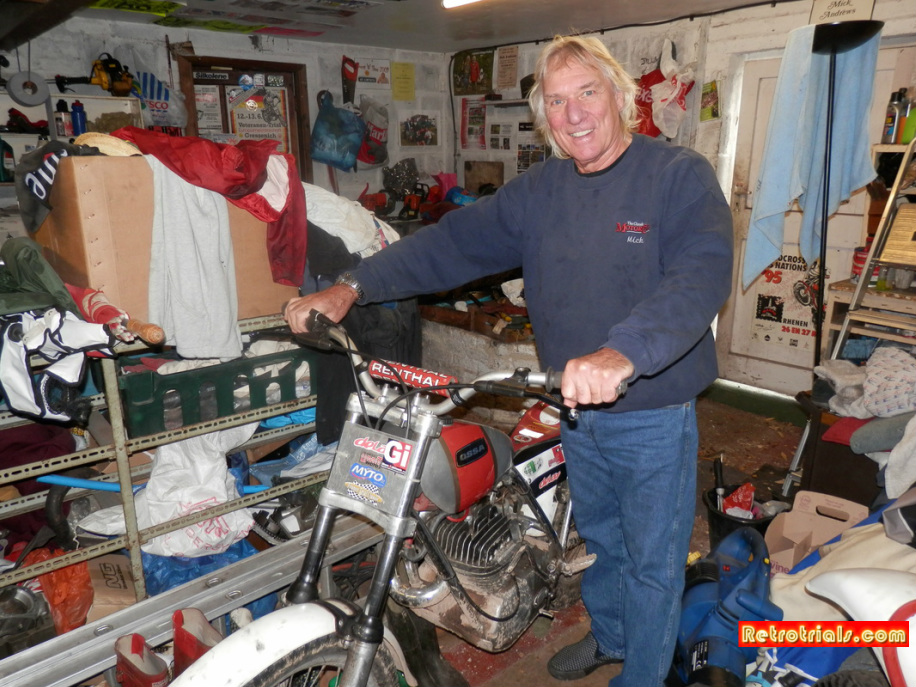 Mick Andrews interview WWW.RETROTRIALS.COM
Photos are reproduced with kind permission including those from Mick's book.

I cannot think of another rider who conjures up the same amount of love and admiration around the World as Mick Andrews. Mick is adored and I do mean adored by so many people in the World of Trial. There is a deep loyalty, a family type affection coupled with a massive World wide fan base, that really doesn't exist in the same way for any other person in trial, that I can think of.

I've spent some time trying to work out why this is. What I've written below by no mean hits the mark exactly, but for me, these few points below sit correctly.

Mick's development of the Ossa Mar (Mick Andrews Replica) as well as the Yamaha TY and MAJESTY puts him firmly in touch with a warmly thought of era that has long since gone.

Winning the first and second European championship for a Spanish motorcycle ever, secured Mick the heart of Catalan and Spain. Mick has a long term and huge fan base in Spain and they are so so proud of him. He is treated by the Spanish with so much reverence.

At this time, trials was in it's hay day. The number of rider entries at each trial were huge in comparison to today and trials motorcycles were selling by the bucket load. Sections were straight forward. Major trials looked possible. There were no computers, no mobile phones. Life looked more simple and straight forward. Mick's huge success winning the European (World) Championship in 1971 and 1972 as well as his Scottish Six days Trial wins in 1970, 1971, 1972, 1974 and 1975 projected him straight into the limelight. Mick is the conduit between our busy complicated lives now and the memories we have of yesteryear and our glorious times as young men and riders.

In 1976 "The Mick Andrews Book Of Trials" was published helping to project him still further, cementing his appeal and feeding trials fans more information on their idol.

Mick also treats his fans as way more than fans. He has travelled the World meeting them for years and years and years. He has sat down for dinner with thousands of them at his trials schools, told them stories and jokes, made them laugh and had a drink with them and listened to their stories. Mick is a very charming guy and it's impossible not to like him. You immediately warm to him. It's not just because of who he is, it's because of what he is. Mick has been to every state and almost almost every trials dealer in the USA. With his wife Jill, Mick has also travelled extensively in Spain, Japan, most of Europe, Canada, Australia and New Zealand continually, ever since he became successful. It's been non-stop travel, making friends along the way.

Today at the age of 69, Mick still travels all over the World carrying out trials schools and attending functions. I can't think of another rider who comes anywhere near to being as well travelled as Mick. He is still at it and shows no sign what so ever, of slowing down.

Mick has spent a huge proportion of his life riding trials all over the World and meeting different people. No other Champion puts himself out there and makes themselves as accessible, continually on the World Stage as Mick Andrews.

Sitting down with Mick Andrews is like sitting down with an old friend. He has a certain deep warmth and quality about him that comes with his age. You know the type. It's rarely found in younger people. Sitting in his company in his cottage and listening to his stories I had to take a gasp of air, in a way pinching myself. Was I really here ? Was I really with Mick Andrews ? It was a truly great experience. For a mostly mid 80's to mid 90's Retrotrials fan, I found myself converted. I am now a big Mick Andrews Fan.
He really is a terrific guy.

If Mick captivated others like he did me, then it's crystal clear to me where his fan devotion comes from. He just has that something.

Of course, there is so much more that I've missed. For me however, I think I've caught the essence of it. All of the above has contributed to Mick Andrews being in my opinion the most popular rider of all time and where the source of the nickname "Magical" really lies.