This interview came about after I was contacted via email by Paul Rose. Many of you reading this will recognise the name or perhaps know Paul. He was one of the better riders in the UK back in the 90's. Even though I have pretty much always lived down in the South of England, I had myself heard of Paul. He doesn't ride much now though, but is toying with perhaps starting up again.
Anyway.....Paul contacted me and told me that he was good friends with Mick. They had been on road trips together and they lived not so far away from each other. Paul had mentioned Retrotrials.com to Mick and was thankfully complimentary :) When he met with Mick he planted the idea in Mick's head about an online interview with Retrotrials. I have subsequently found out that Mick thinks a great deal of Paul and so in Mick's head, if it was good enough for Paul it was good enough for him. So Mick agreed and Paul gave me Mick's telephone number.

I immediately called Mick and introduced myself. I had never met Mick before but obviously we had a lot in common, chatting about trials and Ossa of course. I was interested in what Mick was doing and Mick was interested to hear that I knew the guys at Ossa vaguely and had been to the new factory and the site of the old one also. We had a good chat for about 30 minutes and I agreed I would call Mick after he returned from Canada where he was holding a trials school. He had as a matter of fact just returned from Germany. So the call was ended, then after a month or so I called Mick again and we set up a date for me to visit him at his home in Derbyshire.

I set off early one Sunday morning for the 3 hour drive and arrived, I'm pleased to say a little early. It was just as well as I couldn't find Mick's house and the country lane was being dug up half way down and so it was closed for traffic. I sat in my car in a cul de sac thinking that Mick's house must be beyond the road works but that I didn't have time to drive around to the other end of the lane the long way round. I needed to ask someone where Mick lived. I was now getting tight on time. It was early Sunday morning and there was no traffic and all the houses seemed quiet with everyone asleep. I then saw a curtain twitch, so I jumped out my car and knocked sharpish on the door several times. A gentleman came to the front door. God knows what he was thinking I was doing. I probably looked like a bailiff ha ha . Anyway ......he immediately knew Mick and where Mick lived but he did say "His house is after the road works". "Oh no" I thought. I drove quickly down to the road works, abandoned my trusty chariot and leaped the roadworks carrying all my electronic gadgetry. Luckily Mick's house was nearby and I walked up the driveway.

I've abandoned the car and I'm walking to Mick's. 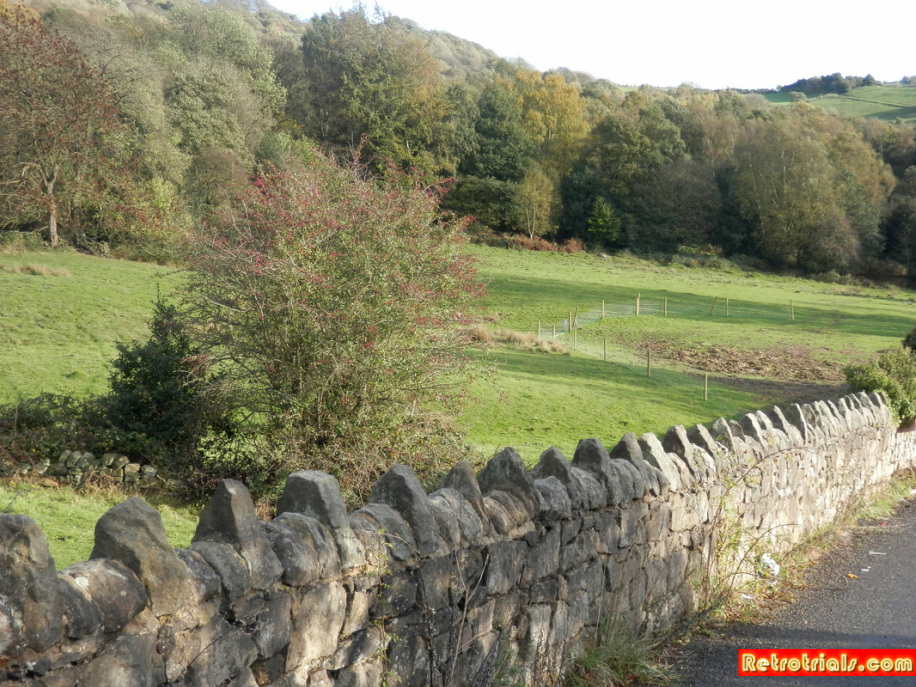 Mick Andrews interview WWW.RETROTRIALS.COM
Mick's gardens are perfect. He really looks after them. The wooden pallets on the left are ready for his friendly refuse collector. 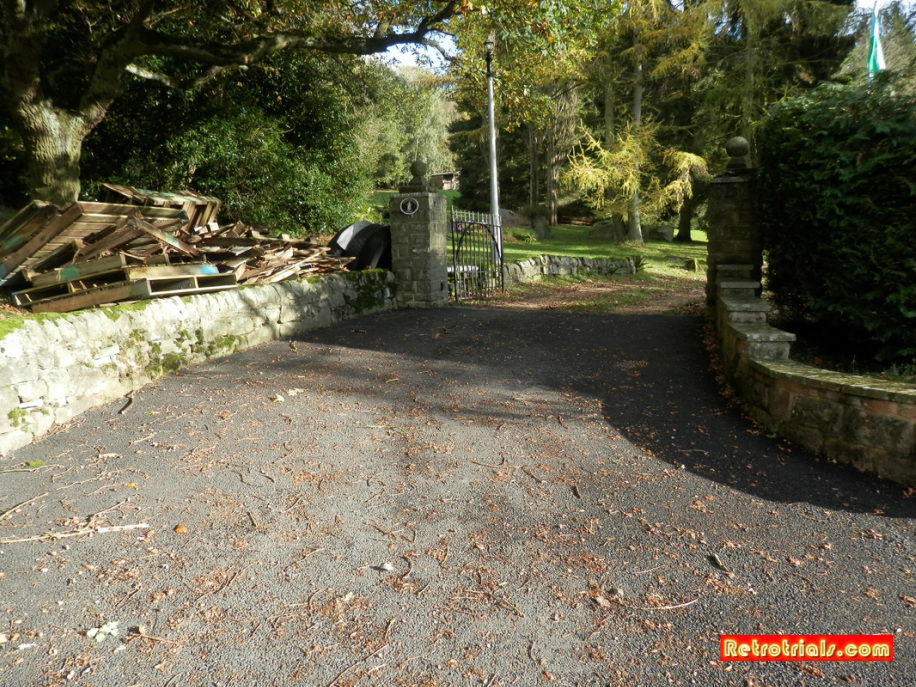 Mick Andrews interview WWW.RETROTRIALS.COM
There is a lot of mowing needed here.

Mick Andrews interview WWW.RETROTRIALS.COM
I walked up the driveway with the large lawns to the left hand side. Large specimen mature trees were dotted around. It really is a beautiful place, it's is very very old, as you will see. I walked past the garage block on the left. I then walked past the old well. Mick to this day has a private well at his Cottage, the system automatically draws water using a pump. We walked past the sunken well and clothes washing area. 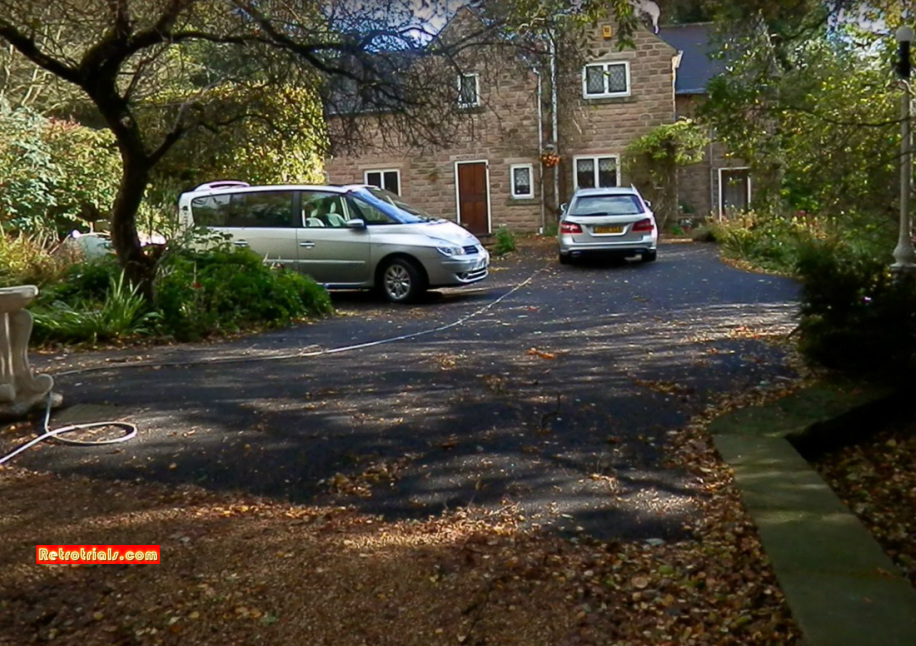 Mick Andrews interview WWW.RETROTRIALS.COM
Mick later told me this is where Jordi Tarres, Tommi Ahvala and Amos Bilbao used to wash the worst of the mud from their kit when they had been practicing here back around 1987. You just walk down the steps to the running water.

In the background you can see the back door. 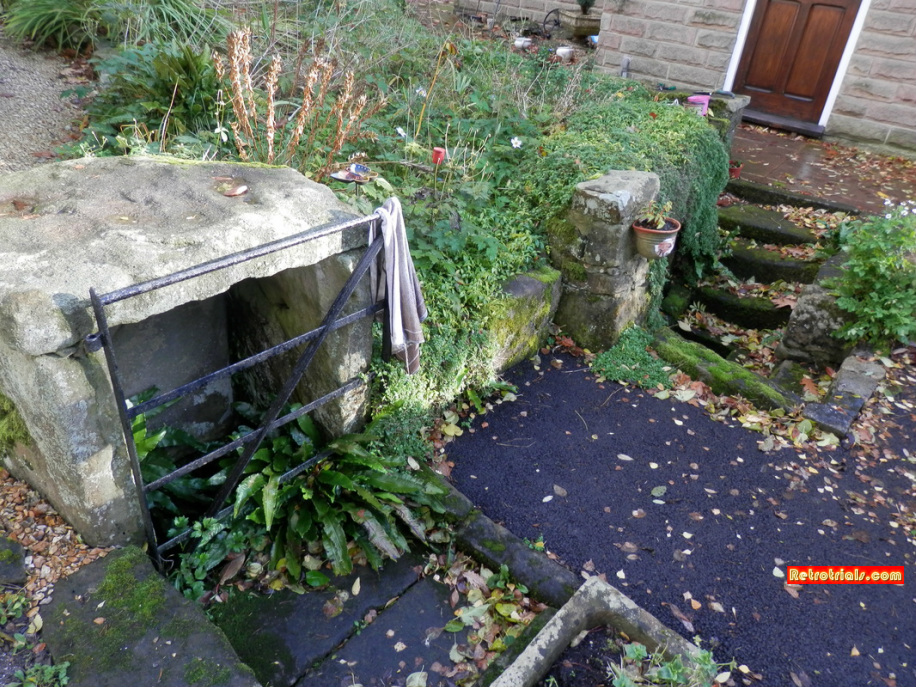