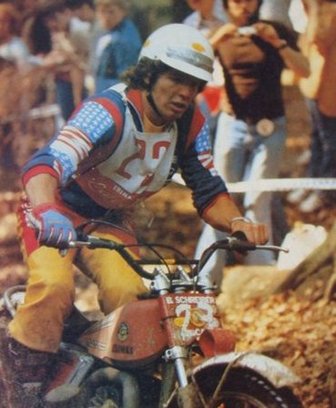 2014 Bernie Schreiber Interview photo solomoto
One of the most well known and iconic names in the history of modern Trials is the 1979 World Trials Champion Bernie Schreiber.

I got into trials pretty late by many peoples standards. It was aged 15, way back in 1984 when I was attracted to a rusting chocolate brown Honda step through C 90. It was looking very sorry for itself perched up against the low garden wall of the local Policeman's house. I remember a little white piece of card wedged under the seat strap with the notice "For sale £60".  Well for me, it was love at first sight and my opportunity to catch up with a friend in a nearby village who had already beaten me, to getting a bike. I was earning £1 per hour from lumping concrete slabs and ornaments around all day at a local small factory and this was justification in my own mind to approaching my father for a small loan :) It was at this time that I got the sit down chat about how dangerous bikes are and where will you go to ride it? Well, you know how persuasive teenagers can be. Over the day or so, I persuaded the money out of my fathers wallet and the bike was delivered to me, by ..... I have to say ...a very worried Policeman.

This was my first bike and I loved it so much I can't tell you. Before I even knew what sections were, I had plotted routes and would ride around these tight courses balancing on the rear passenger pegs for hours and hours on end.

Then .......as for all of us, my awareness of motorcycle sport developed and I could immediately relate to trials riding. I started buying the colour magazine "Dirt Bike rider" way before I entered any competition and had a bedroom wall adorned at this time, not with girls, but with bikes. The girls would come later ha ha. I would have posters of the top trials and motocross riders on my wall and I just couldn't imagine how cool they all where and how amazing all their bikes were.
As a kid growing up in the UK in the 1970's and 1980's I really, really looked up to America as the most incredible place in the whole wide World. I knew almost nothing about the great countries of Spain, France and Belgium. The USA was on the TV all of the time. It was the land of Freedom and looked just incredible. The cars were huge, flashy and powerful. Everyone was smiling, good looking and glamorous.  Gorgeous girls roller skated down beach promenades, past men pumping iron on the sand. The cops looked cool. The food looked big and tasty, the cities were huge, modern and fast paced. All of the movies worth watching were made there and for Christ's sake, they even sounded cool like John Wayne or Starsky and Hutch.
So you can imagine me coming across someone or something that combined these two qualities that I admired so much. Trials and the USA.
That person was Bernie Schreiber. Bernie was suuuuuch a cooooool guy. He was from Los Angeles for Christ's sake. Didn't you know ....they make movies there ! Are you getting it? Did you feel the same? Bernie Schreiber just encapsulated for me everything that I knew and loved about Trials and the USA. Glamour, movies, the wide accent, the big cars, the burgers and steaks, the freedom, the confidence to do and say what you want . Bernie was all of this to me. He was not just a rider ..........he was so so much more.
But I was just a small kid in some small village in the middle of nowhere ......... and Bernie Schreiber was a World Champion. It didn't cross my mind that one day I would meet him.

Bernie was the first and is the only World Champion Trials rider ever to come out of the USA. Bernie is the Jewel in America's Trials crown and is held in extremely high regard over there in America. But this is not just restricted to America. Around the Trials World people have fondly cherished personal memories of Bernie and other great riders. The now flourishing Retro trials scene all contributes to a buoyant and great interest.

However, Bernie moved away from Trials in the 1980's and has little contact with the sport these days. He is rarely interviewed and none of these interviews contain any detail and rarely reveal anything new. You see, back in the day and even shortly after their riding careers, riders had to be very careful about what they said about the industry, the bikes, the characters and the times. Since then a lot of water has past under the bridge, companies have come and gone. Now it's all looked back on, with a sense of maturity and a smile.
Then, in what seemed like no time at all ......we said Goodbye and Bernie was gone. I then spent the next half an hour dancing around the garage and completely forgot about the paint going hard in the spray gun :).

Bernie explained to me that he lived out in Florida. Wey Hey.......that's cool.....there's a great reason for a holiday out there. Then a few moments later I was brought down to earth with a somewhat cooler meeting place of Zurich in Switzerland. That's still brilliant. So, several emails later Bernie and I had agreed where to meet and it was booked. Coincidentally we had booked hotels 300 yards from each other. It was fate ha ha :).

Bernie has sent me through by email some photos and information that might help me preparing my questions. It was very interesting stuff and sure, it helped.

So, on a cold Monday morning my wife and I caught an Easyjet plane from Gatwick to Zurich where we arrived a short time later.