The Retrotrials workshop has been very busy recently. I'm sure it's no different to many of your man cave's as well. There's all ways something on the go in the workshop. More often than not, the bikes that need attention just start to stack up. This is what happened in this photo. The Mecatecno came in to have a better original silencer fitted. This was a longer job than I'd hoped and involved me welding a new lug onto the frame and grinding the old one off and making good. Whilst I was working on the Mecatecno, the Merlin on it's side, needed the clutch freeing up, where the bike had been sitting the plates had stuck and wrenching the bike backwards and forwards didn't release them. This was only a short job leaving the bike on it's side for a few days whilst I worked out the weird clutch. Then an air filter came for the Merlin Gallach in the far right hand corner, so that had to be fitted. During all of this time, the old GasGas Halley had been leaning up against the bike ramp on the right. I knew I had to fabricate an exhaust, so I brought down by immaculate Halley for comparison purposes. Sooooo, before you know it  the workshop is cram packed with bikes.
This situation is something I don't care for. I like a one bike a time workshop.  Eventually the Mecatecno and the Merlin's left ....leaving me to focus on the GasGas Halley project. The Devil's own bike.

My inspiration for this new rebuild was of course the great mid 1980's. It was a wonderful time for many people my age. I would have been only 17 when the first Halley was produced and to be honest I didn't really have any idea it existed back then. Since then of course I look on the Halley as being a modern classic. It was the first machine ever of GasGas and was the bike that immediately catapulted Josep Pibernat and Narcis Casas the joint owners on their way to owning the biggest manufacturer of Trials motorcycles at that time, in the World.
The GasGas Halley is a beautiful bike as well. On the very few occasions I have displayed this bike it always gets so many admirers. The red frame goes so well with the white plastics and sleek, slim line tank. The Halley also sports the famous classic GasGas Retro Decal which has subsequently been replaced. In my opinion the first 1986 Halley, with the rear drum brake, is one of the beautiful and significant modern trials machines ever made.

Here is a scan of an original GasGas Halley brochure that I was given in Spain recently. I am very grateful Xavi. Thank you.

Later in the trip I was fortunate to meet the Rider pictured, the great rider and picture of happiness and effervescent youth Gabino Renales. I interviewed him for this website and as you can see he signed the cover of this Halley Brochure. 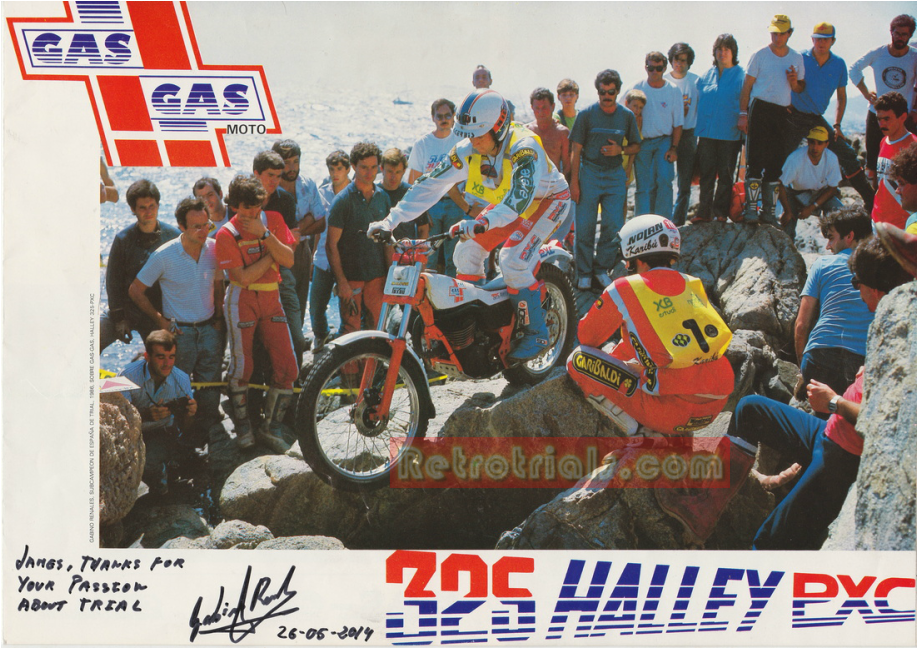 1986 GasGas Halley Restoration www.retrotrials.com
But of course Gabino was not the only GasGas rider on the Halley. Andreu Codina also rode the Halley from 1986 staying with GasGas or many years and eventually retiring from riding in the early 90's and taking the head as World Wide GasGas sales manager. 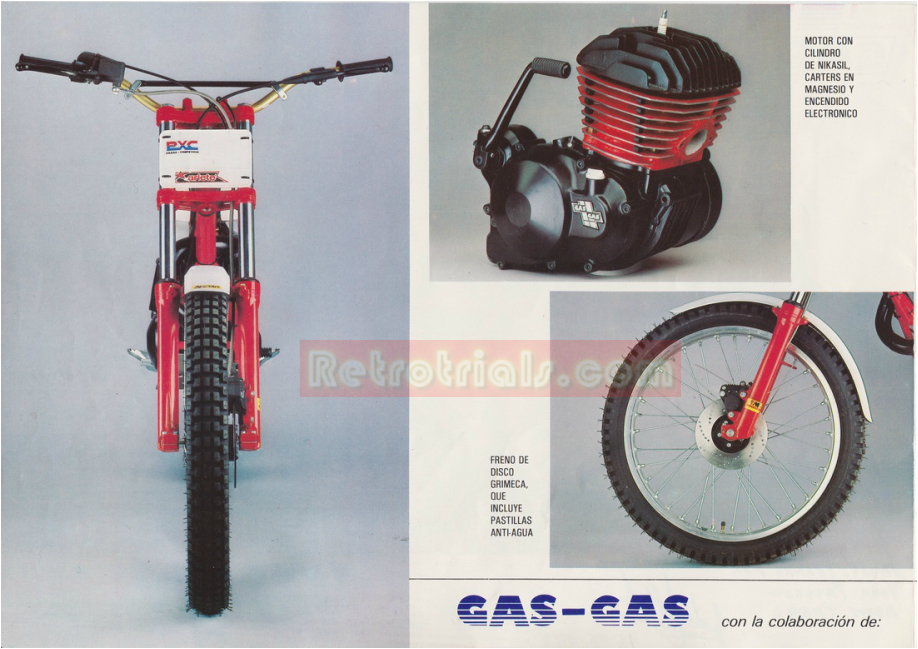 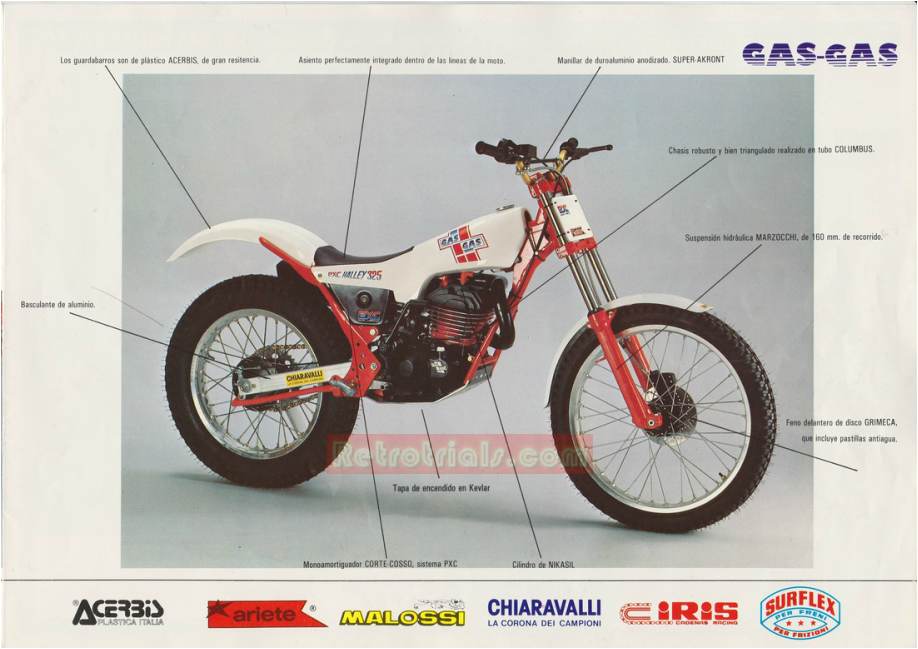 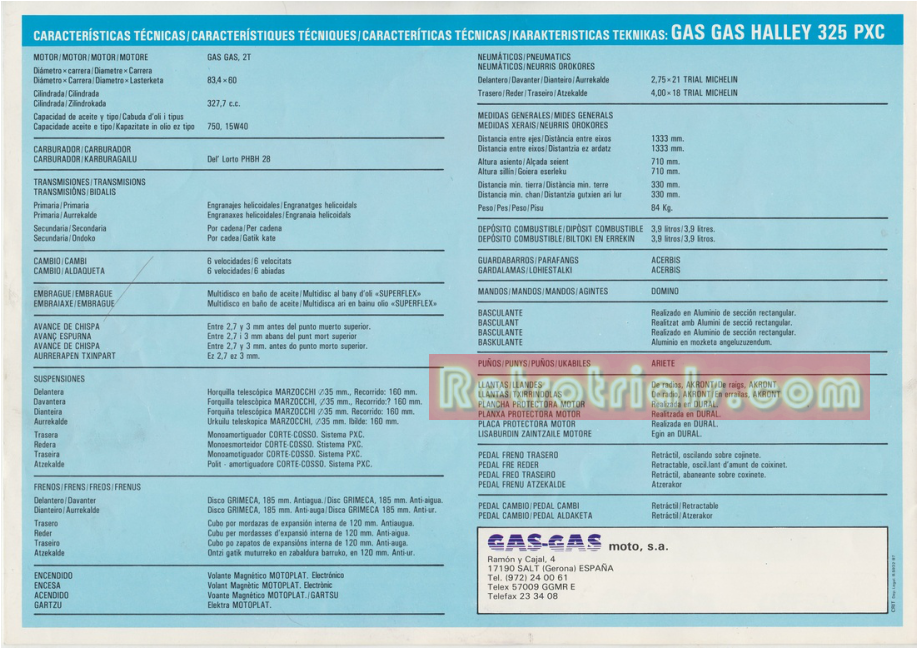 1986 GasGas Halley Restoration www.retrotrials.com
So far we have seen the pictures of the beautifully prepared GasGas factory bikes. They bore no relation to the hunk of iron that I had laid claim to in Spain. After a few phone calls and messages a deal was struck to buy the Halley. The only problem was that it was situated South East of Bilbao. I telephoned Bob, my trust worthy bike pick up man. He's a great guy. I give him the address and telephone number of the seller and he goes down and collects the bike, paying with his own money. He returns it to me and I pay him the cost of the bike + £100. It's worked out brilliantly before and couldn't go wrong. So I gave Bob a ring and his wife picked up the phone. She passed the phone to Bob and I explained my new mission for him. He then gave me the Earth shattering news that he'd retired from delivering mushy peas and Ex Pat's belongings to the Costa del Sol and wouldn't be driving down there any more. Oh Nooo. Sooo, your pulling my leg !!!. He assured me he wasn't.
So being a firm believer in the mantra of the more people you involve, the more cock ups there will be I threw caution to the wind, I jumped in the van and waved good bye to good old Blighty for a few days. It was all very last minute.

I have driven to Spain many many times and every time I leave Barcelona for the trip home I tell myself.....never again. This is too far to drive. "I am never doing this again". I even write it in my diary to remind myself. Then as time passes I forget about the bad side and just remember the great times. Before you know it ......I'm in the van heading south again ha ha ha.

I couldn't  bear to pay the extortionate £680 return fare on the ferry from Portsmouth to Bilbao , so I drove saving about £250. So, it was a steady cruise down to France, staying the first night in LeMans.
The Greenwich Prime Meridian runs vertically around the globe, in line with Greenwich. It therefore runs south through France and Spain. This was the moment we crossed it.

We saw lots of wide empty roads. Its such a contrast to the UK. 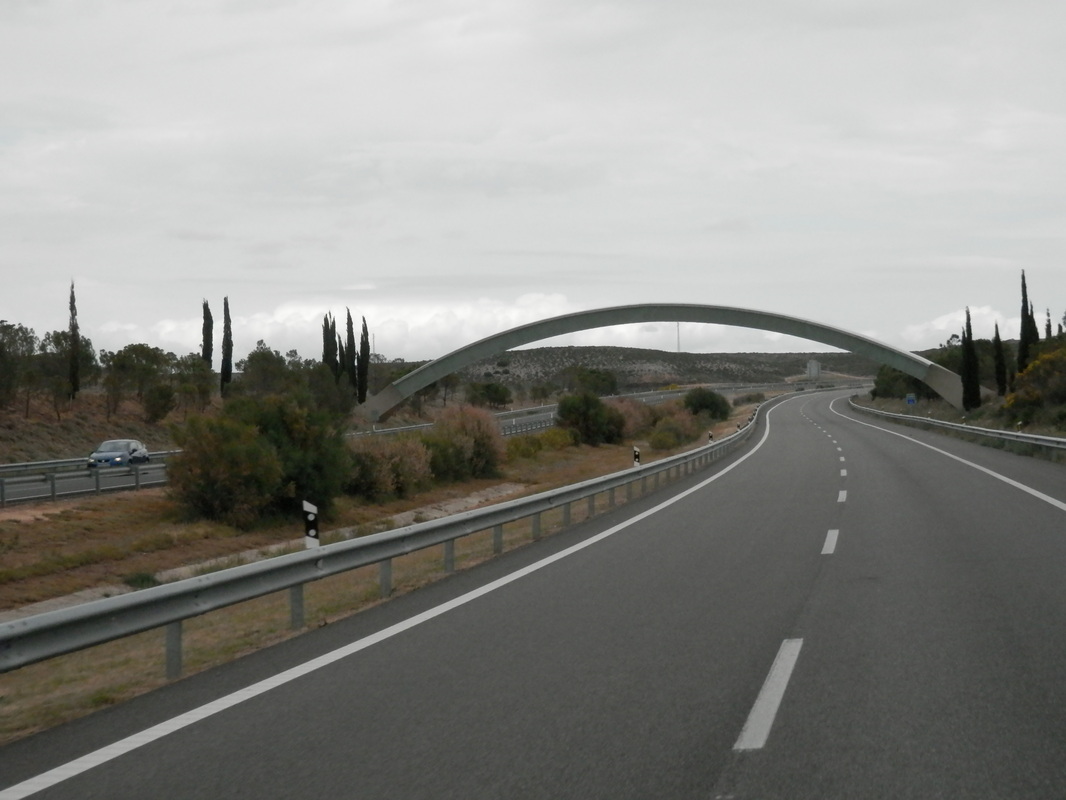 1986 GasGas Halley Restoration www.retrotrials.com
I did all of the driving at a steady 70MPH. Do you like my new nail varnish ? ;)  Mecatecno Dragonfly colours :) 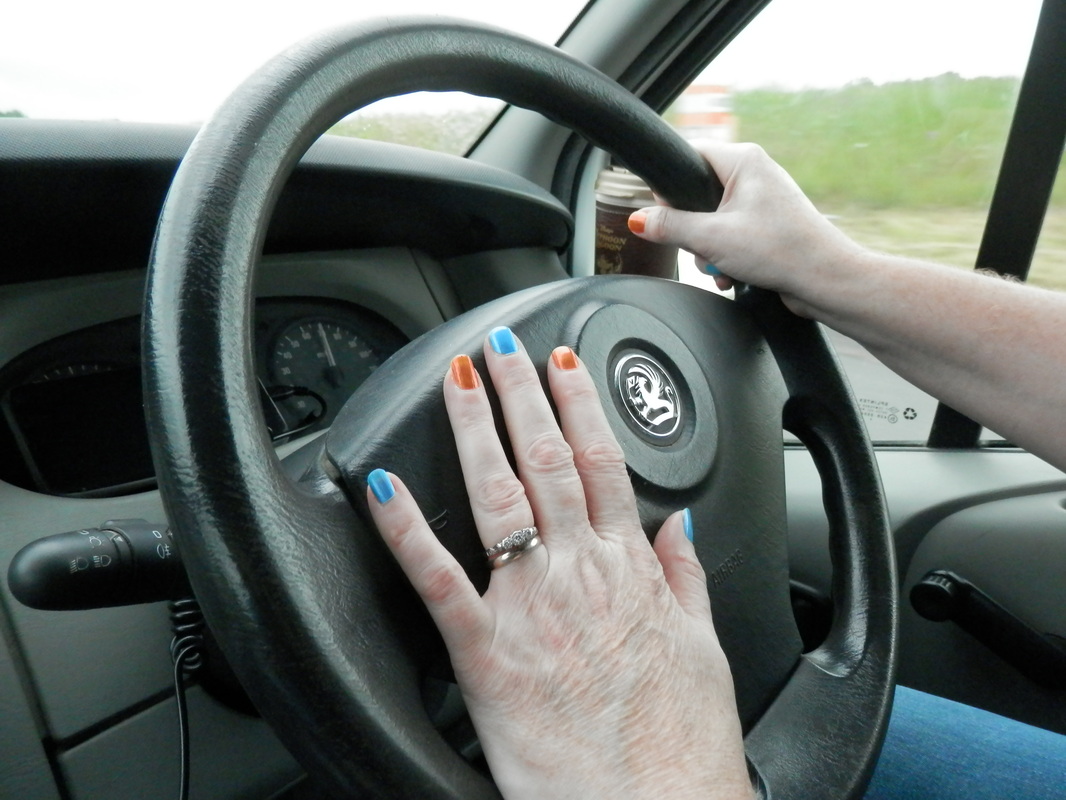 I started to get really bored between snoozing and driving. I must have listened to my wife's Footloose CD 10 times !! :) 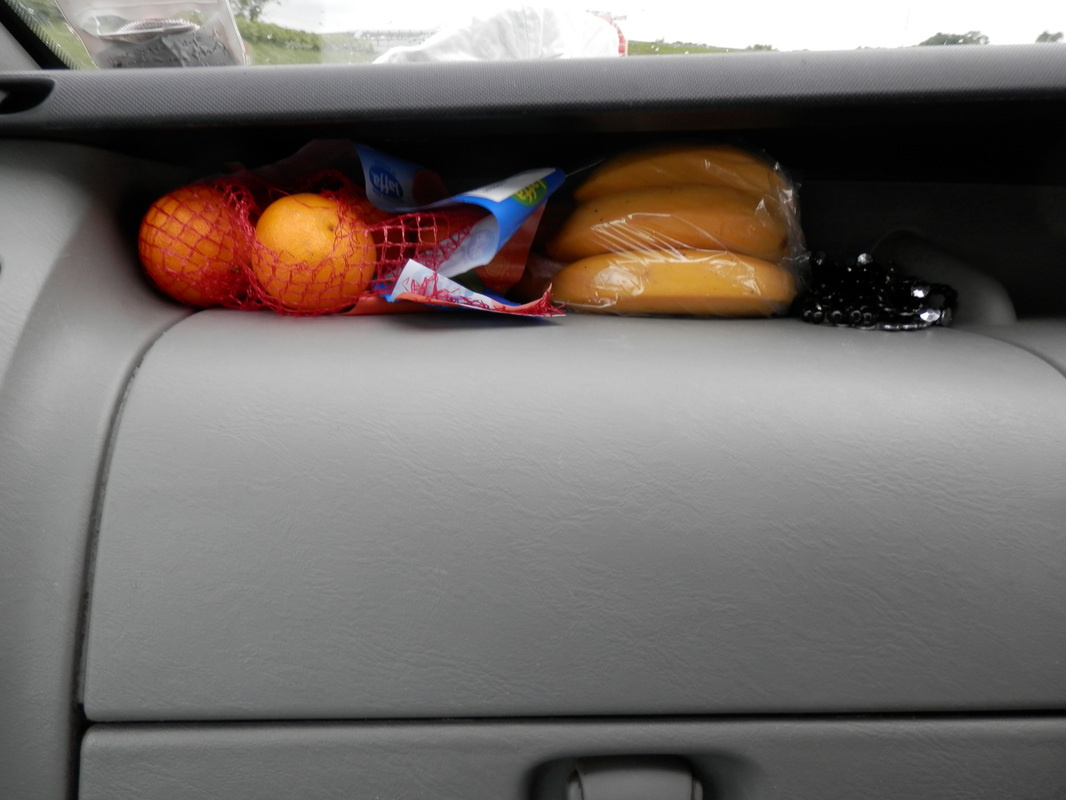 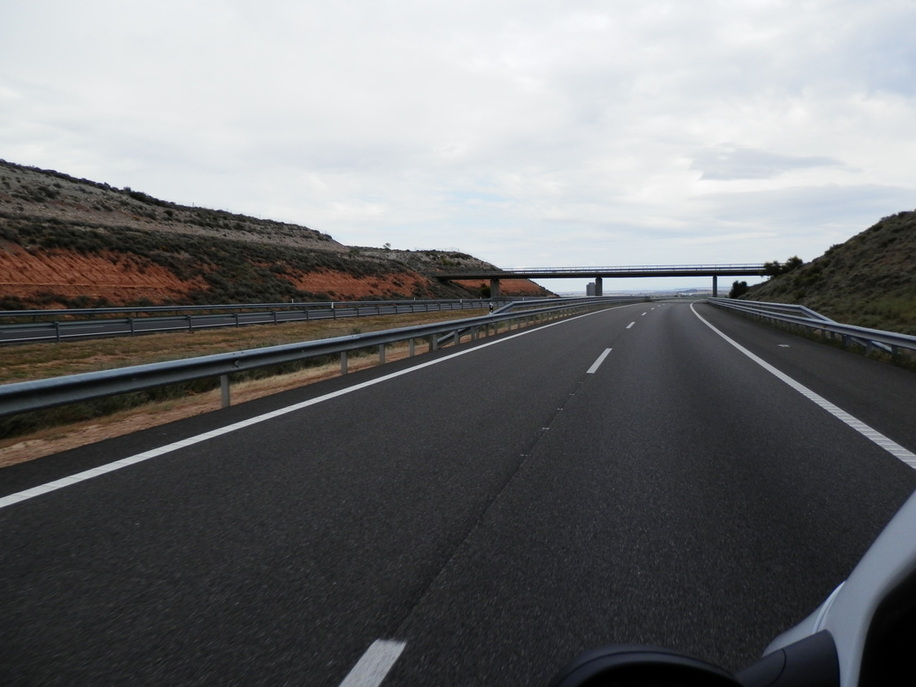 1986 GasGas Halley Restoration www.retrotrials.com
I was due to meet Jon the owner of the Halley at 5pm, but then he sent me a message saying he couldn't meet until 6pm. I had no choice but to say ok. The trouble was we trundled down the country lanes nearby passing all sorts of weird wheeled contraption vehicles and arrived at his house at just after 4pm. 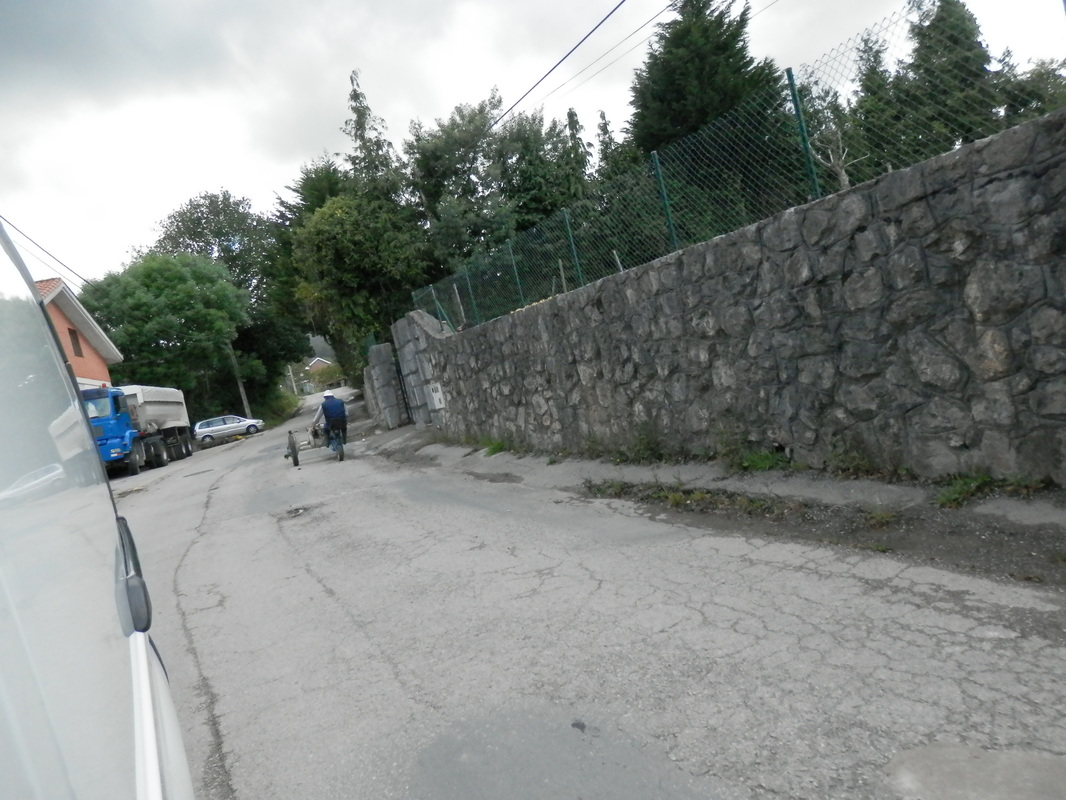