So, instead of waiting I telephoned Jon. Luckily his mum was in and we drove the van onto the property. Large strong dogs were chained up barking as we pulled up by the detached house sitting in large gardens over looking the country lane. This was a very rural location. We were warmly greeted by Jon's mother who said that Jon's father would be with us soon. I was pleased that we could do the deal now.

This was the advert I had seen for the Halley. I knew it was rough, but also that it was salvageable .....just. My friends told me I was crazy buying it. Josep called it the Devil's bike and he was right. My messages with Jon had lead me to believe that the engine ran and that the exhaust, which was missing in the photo, wouldn't be sold with the bike. So ...it wasn't that bad was it.

As we waited for Jon's father to arrive I asked the mother where the bike was and she ushered me away from the garage towards the centre of the garden. I thought ... "Oh, she doesn't understand me...and she wants to show me her vegetables" - ha ha. 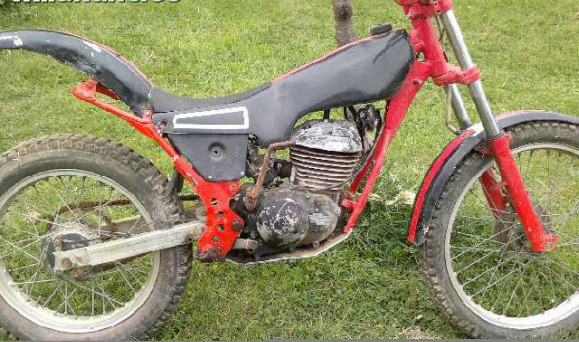 1986 GasGas Halley Restoration www.retrotrials.com
Then it appeared amongst all of the junk.

The GasGas was leaning against on old table in the garden, where it hadn't moved for 4 years !!!!!!!!! 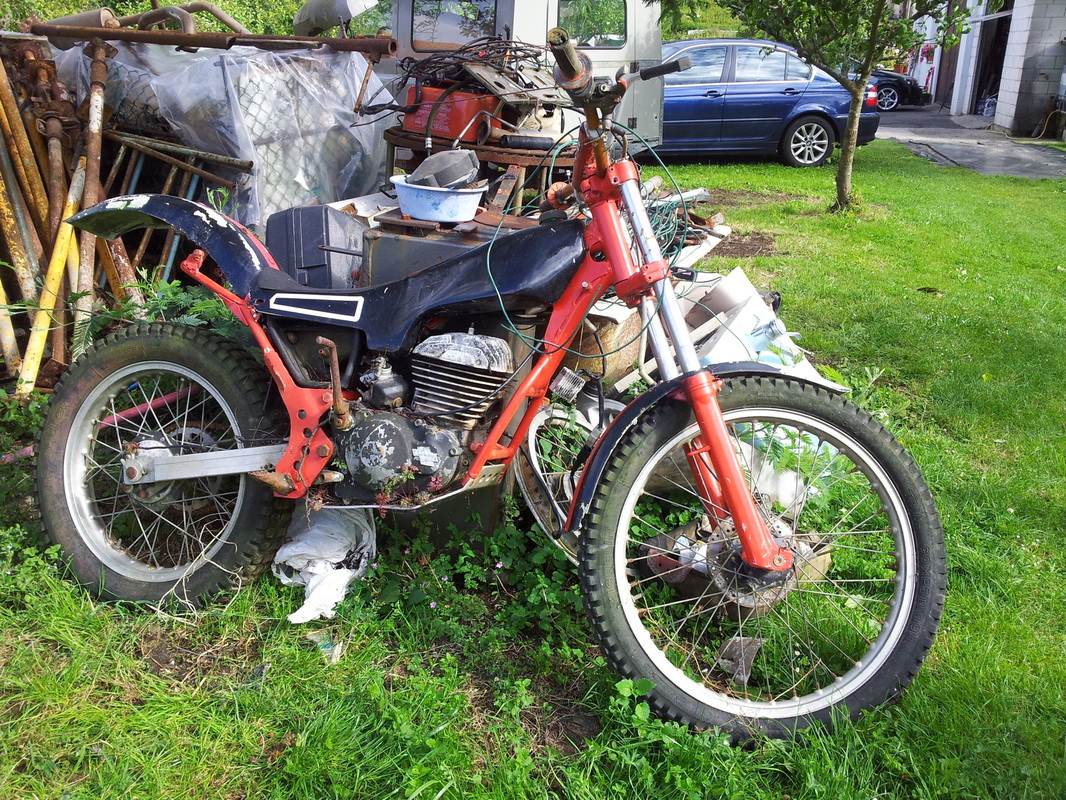 1986 GasGas Halley Restoration www.retrotrials.com
I suppose my thinking had been right. The mother might have been keen to show me the vegetation that was growing around the engine and in the air box. 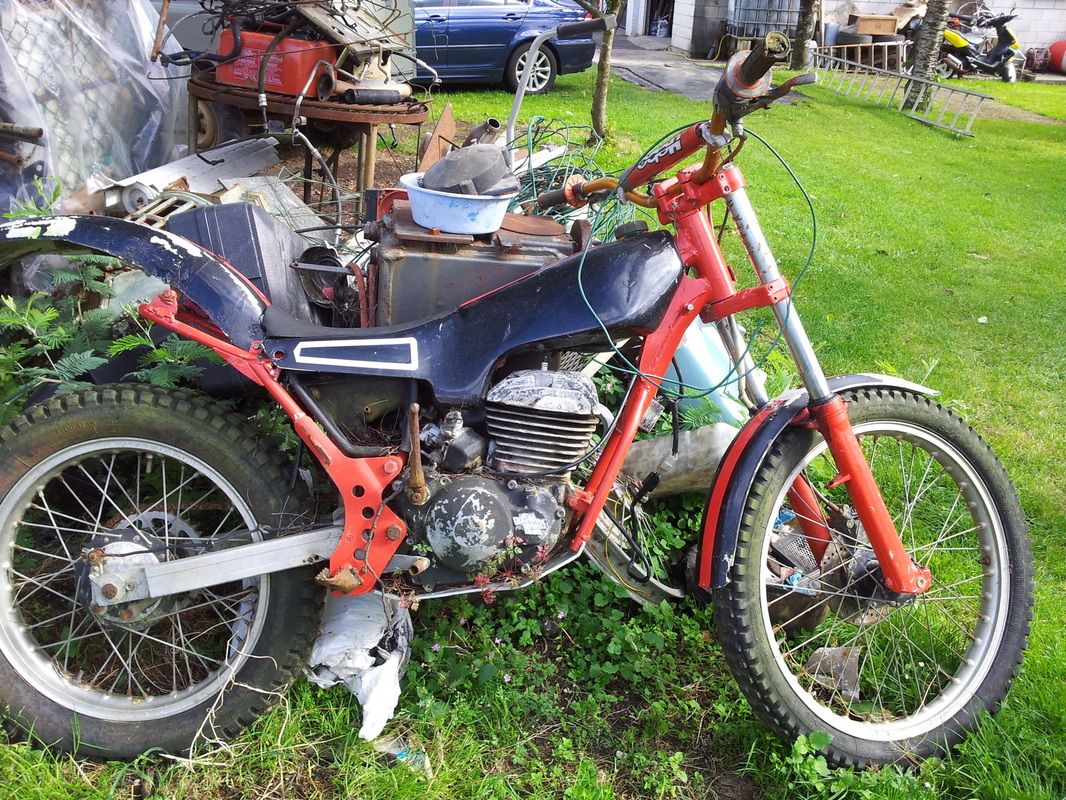 1986 GasGas Halley Restoration www.retrotrials.com
Kick start seized.
Everything had been invaded by snails. Everything was covered in corrosion. The carb was leaning on it's back full of water. The air box was full of pine needles.
Plants were growing on it !!!!!!!! 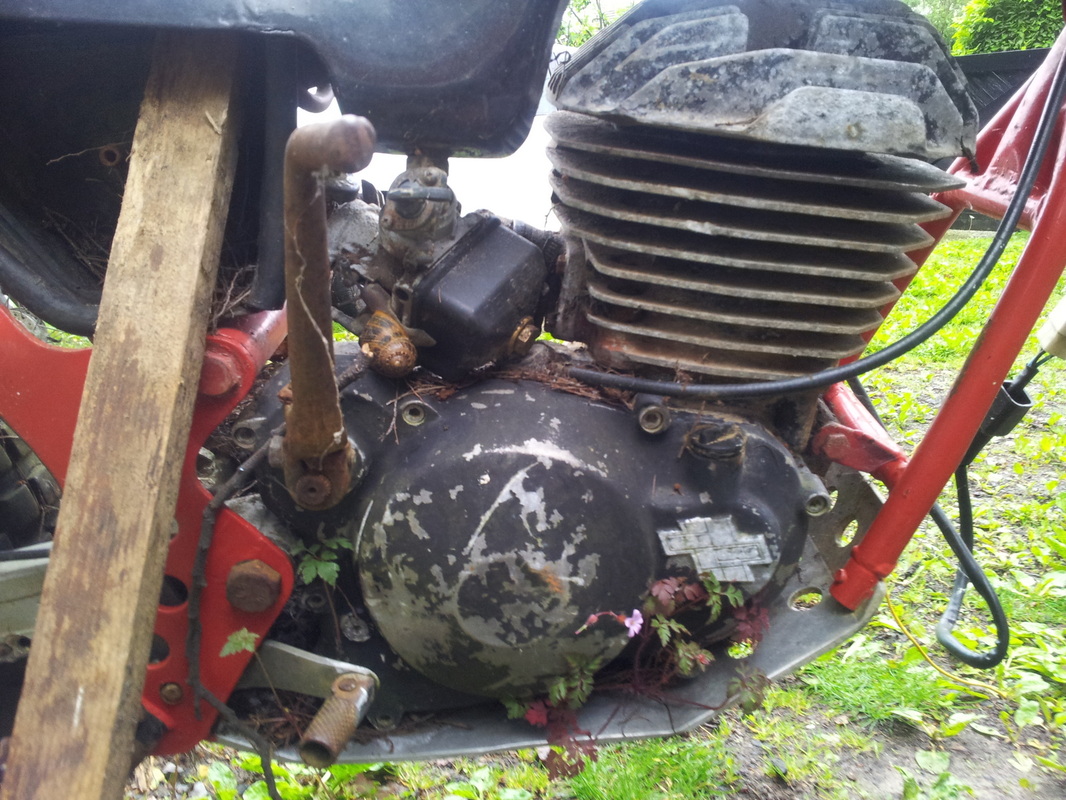 1986 GasGas Halley Restoration www.retrotrials.com
The cylinder head was completely loose. The rear wheel was completely seized. Ugly lugs had been poorly welded like warts across the frame.
Wire lay strewn all over the place.
There was no exhaust.
The forks were so badly pitted.

As I stood there looking at the bike in disbelief, all of the neighbours came out of the houses behind us and slowly walked over to us and congregated around us, staring at us. "What was the strange Englishman doing here buying the old wreck from the garden ?". Why did they come all this way for this rubbish ?. It felt strange. It felt a little like we were a real novelty, something very strange ......I don't doubt they were right, for one second ha ha. I could feel them thinking  "Were they missing out on something worth tens of thousands of euro's ? ". I saw this flashing through Jon's father's mind. I actually had to reassure him that this wasn't worth the same as a Matchless or Brough Superior.

Jon's father and a neighbour wrenched the dead Halley from the death strangle of mother nature's weeds and carried it to the garage placing a pole through the rear wheel as it wouldn't move. 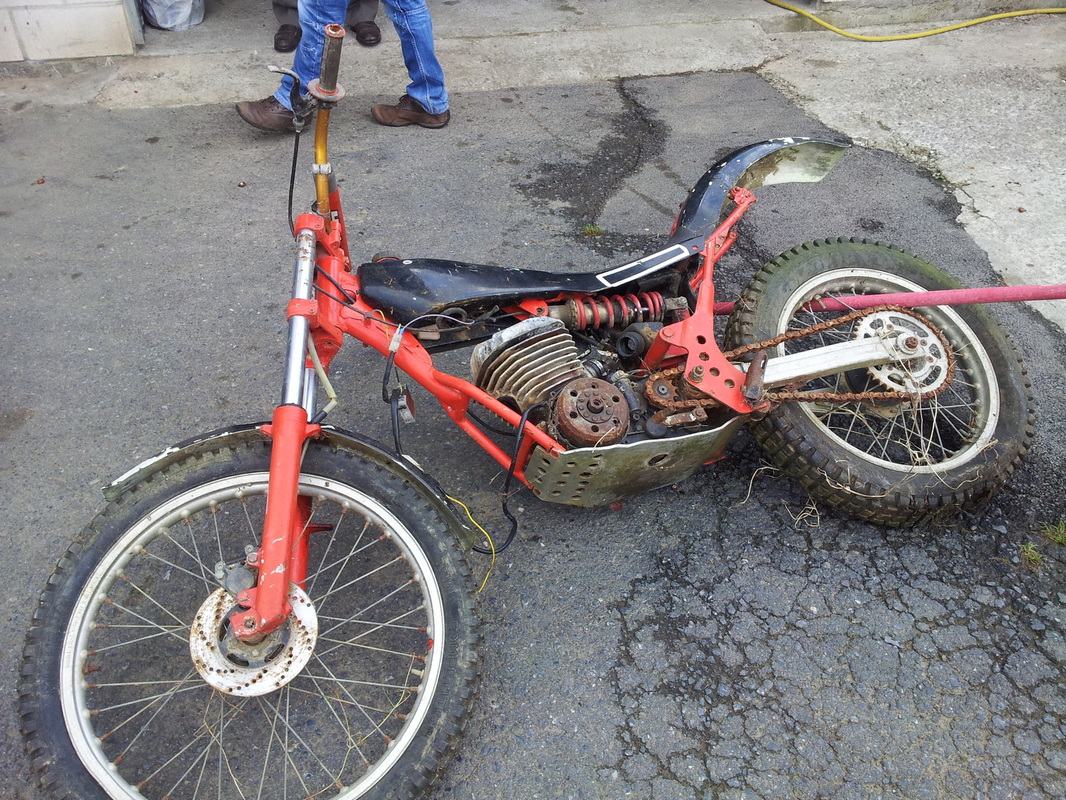 1986 GasGas Halley Restoration www.retrotrials.com
I had to call Jon.......so I did. I explained that shortly I would be in hospital with heart palpitations. After a friendly chat we explained each of our failings in understanding each others previous messages and settled on a new deal.

One thing that wasn't in the advert, was that I was going to be a foster parent to all of the snails that lived on the GasGas. 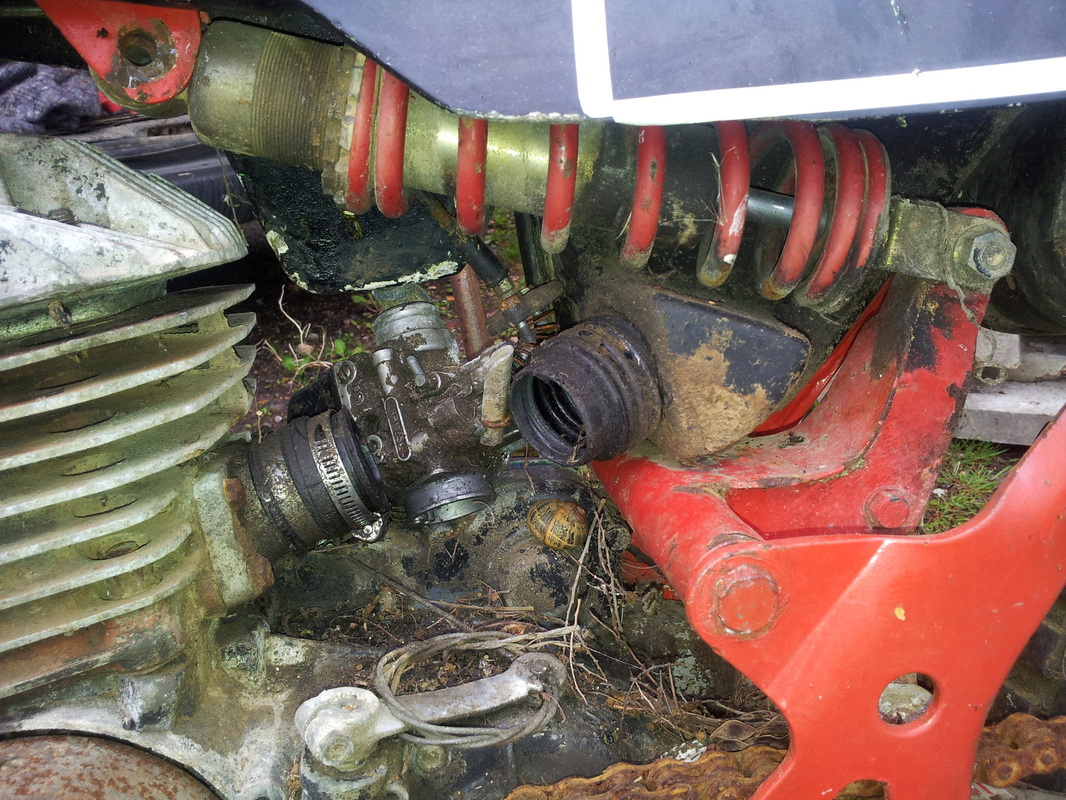 1986 GasGas Halley Restoration www.retrotrials.com
Josep thought this was scrap. I think he was right .......but you just wait and see. I have a vision. I can see the light.

So, she was loaded up and as we waved "Adios Amigos" out of the window, the neighbourhood settled back into its regular rhythm of just ticking along.

Here are some photos to show you the full picture. 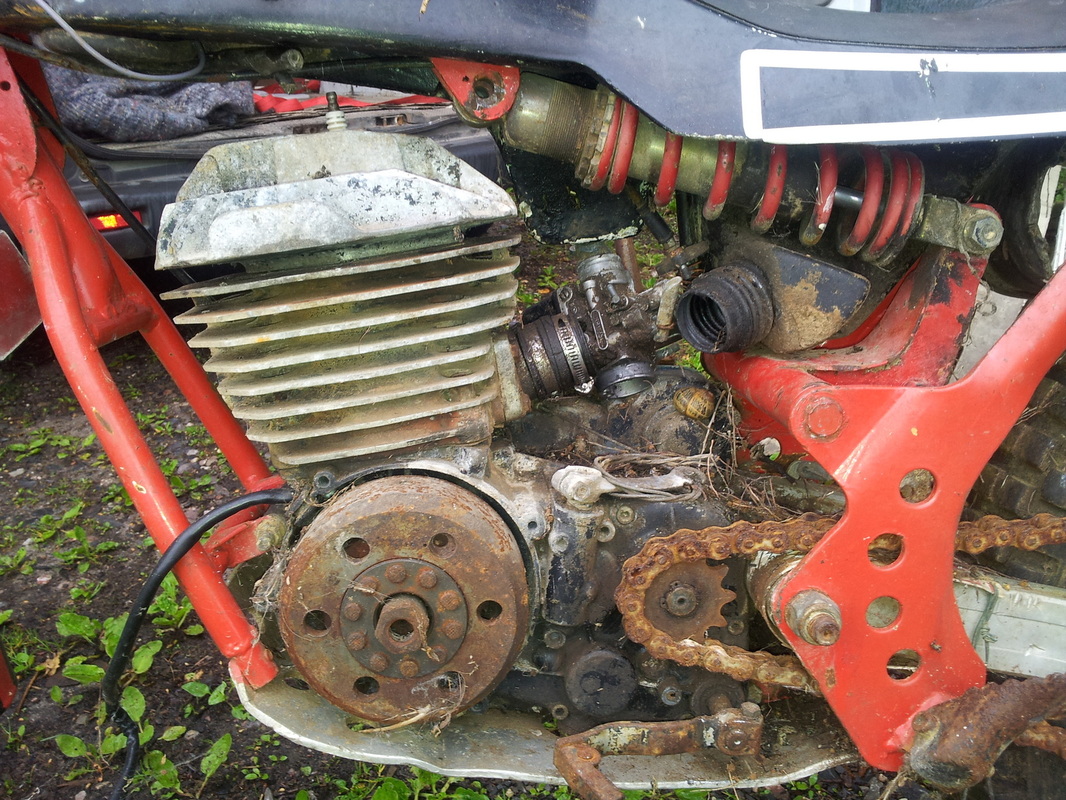 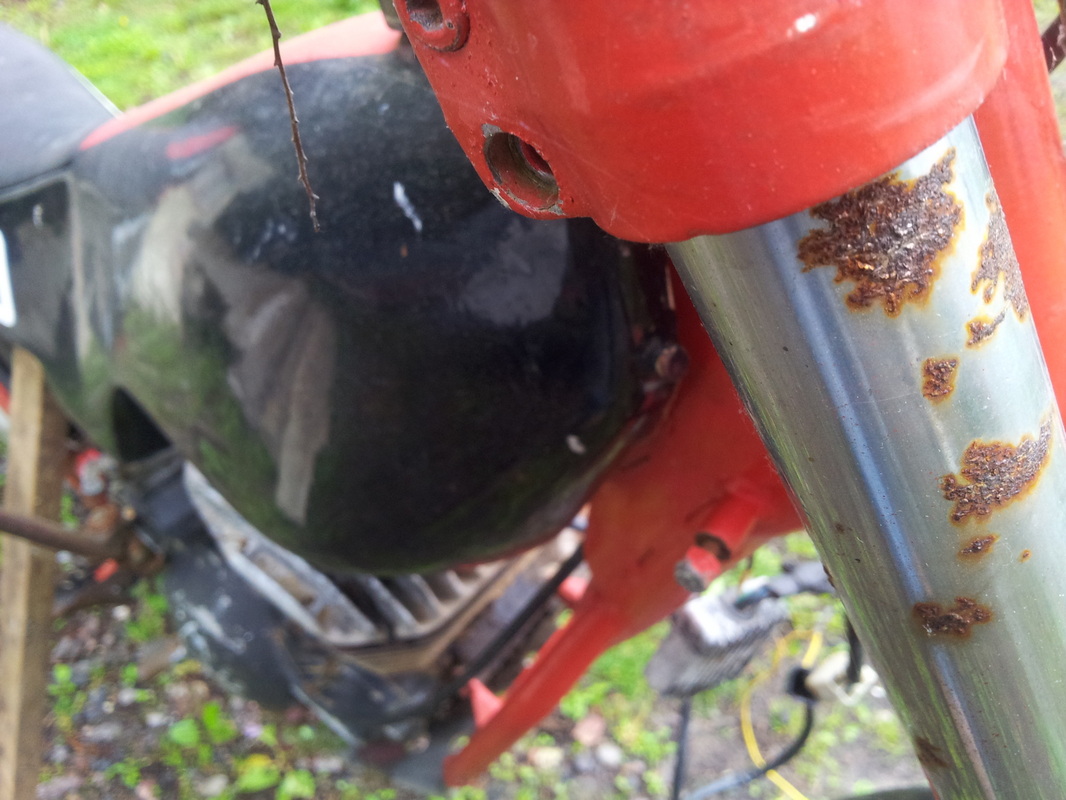