Why do you love Hawkstone ?

It was a good bit of land. It was different terrain and on the course of riding around hawkstone you ran into different types of ground, slippy mud, rocks and loam. It was a great place to hold a world trial. Its grippy terrain

STEVE SAUNDERS INTERVIEW WWW.RETROTRIALS.COM
Steve – a really good friend of mine is into building development and he got involved and is still involved with Bloor homes. The 3 guys that own Bloor homes, own triumph. They made their money in property. Triumph is a profit making business now. They own triumph. So we got together and deciding that for Gods sake we’ve got to make a triumph cub. They listened but with proposals of 3500 units a year they just weren’t even remotely interested in going down that route. So that was as far as it got.
Both Eddy and Jordi used to vomit after trials, did you used to feel the pressure?

I’m slightly different to them as I would vomit before the trial.

Sarah – you know Steve would ride the trial, the complete trial without a morsel of food in his body because he couldn’t keep it down. He would never have breakfast would you, never have anything to eat during the trial and probably not even for 2 or 3 hours after the trial. I always used to say, you’ve got to eat something, you’ve got all this work ahead of you.

Steve – I used to eat in this manner during the week as this was the only way I could train my body to cope like this. Now I don’t, I just don’t stop eating. Jesus christ I’ve made up for it now.
What happened at Bilstain in 1987on the step?

You mean when I nearly kicked someone. Well, ultimately I got it wrong. That was sheet ice that day. The bit I landed on, was on ice. On the approach I must have got something wrong and it landed on the top and on ice and that was the end of that. It shot back over my head wiped out a load of people. 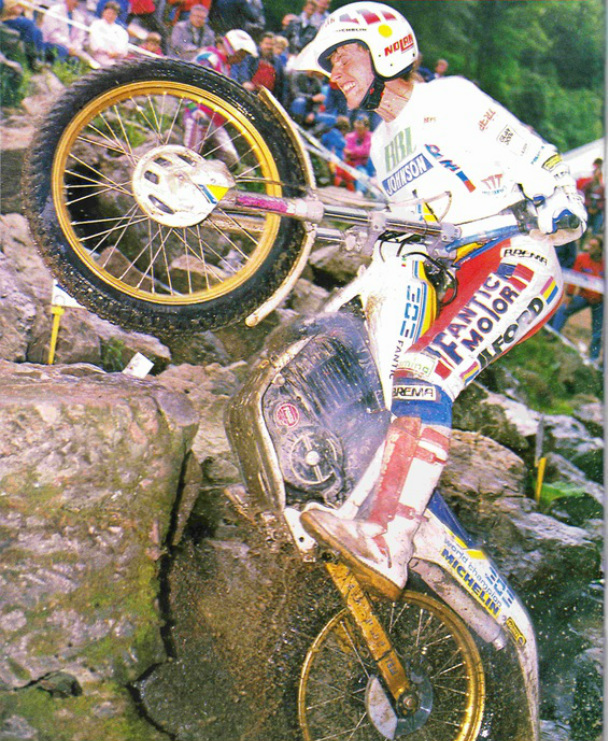 What are you most proud of in your career ?

Ummmm coor  ummmmmm 30 second pause. Sarah comes in and says “He hasn’t got a clue “


Steve replies “ That’s what I am most pissed off about “ ha ha ha
Sarah says “That’s the things that he’s had most trouble trying to put behind him”. Steve says “err yes!”

Looking back at 1986 when you think you were robbed of the world championship , is there anything that you think you could have done differently?. 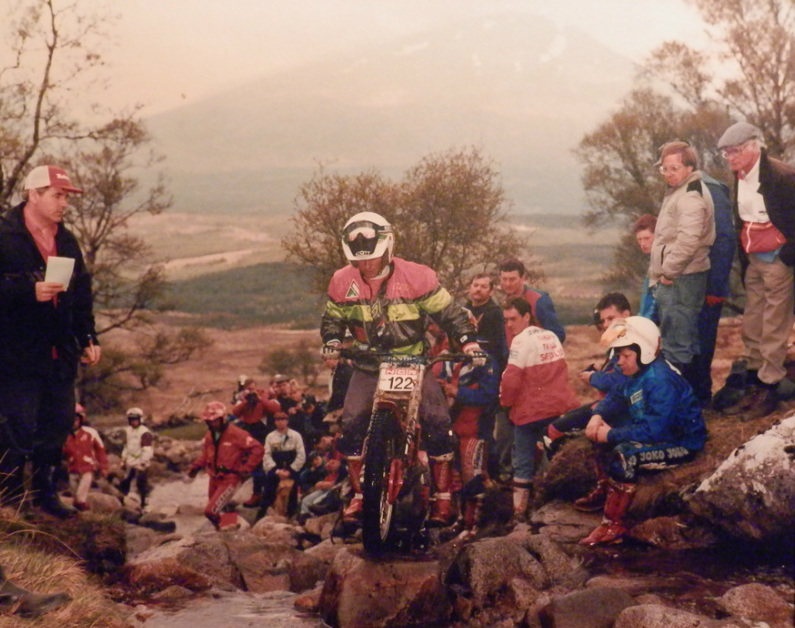 Steve at the SSDT STEVE SAUNDERS INTERVIEW WWW.RETROTRIALS.COM
I should have made sure the might of Honda sorted the problem out because I’m sure there influence and legal teams and all the things that could have gone with it, they could have over powered everybody else. That’s by the by really.

I don’t really know what I’m most proud of

Sarah says “I think you should be most proud of all your British Championship wins”. Steve says “What my British championships?” Sarah replies “Yes .Not many people can hold onto a title like that “.

Steve says “No, no that’ll do then”

Is there anything else you would have done differently?

There are a million things I would have done differently