An Exclusive Interview with 1981 World Trials Champion Gilles Burgat
So after 1981 when were you expecting another win in 1982 and how did that go?

Yes I was. I think 1982 was a pretty good year. Well I think I got 3rd at the end of 1982 so it was pretty good. I think it was almost second place. During the winter between 82 and 83 I have completed a lot of practice and was also working out a lot so was doing everything I could, I had a very good winter. And I was preparing and I felt ready to get my title back, but it did not happen, he was a better rider than me.
​
You seem to me as being quite happy with 3rd place.

Well, you know I'm pretty much like this in everything I do in my life. When I get something I don't care too much to get it again, you know what I mean? 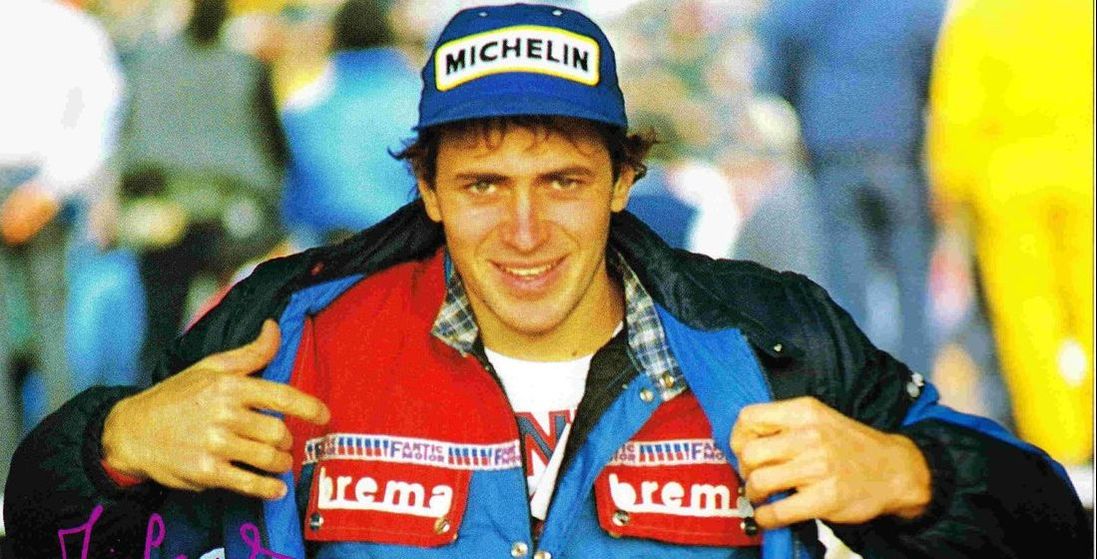 An Exclusive Interview with 1981 World Trials Champion Gilles Burgat Photo Trials Journal
You know a guy like Thierry Michaud is completely different and he wanted to be the best all of the time, he had a lot of aggression and a lot of drive. I really wanted to be World Champion again but the people who won the Championship and beat me wanted to do more than me. I put everything I had into it but these people wanted it more than me.

You think looking back at 1982 and with reflection there is anything you could have done that you could have changed to get a better results?
​
In 1982 and 1983 I don't think so, I don't think there's anything else I could have done, but after this time I think it was too late for me because the technique had changed and after this time it was not for me, as I already said I was a flowing rider who was good at the no stop style and after in 1984 we start moving the bike a little. Pulling the front around a little and other tricks. I think at this point, my time, I come I tried but I never enjoyed practice with this type of technique, saying this but I did have good results in 1985 with my Yamaha but this was not my kind of riding.
In fact Gilles had an amazing bounce back from a Fantic 9th place in 1984 and secured 4th in 1984, rejuvenated onboard the Yamaha. Gilles describes the incoming new wave of tricks was something he didn't adapt to, whilst others did. As a result his results fell sharply to 12 the next year (Yamaha) and 15th in his final year 1987 on board the Aprilia. 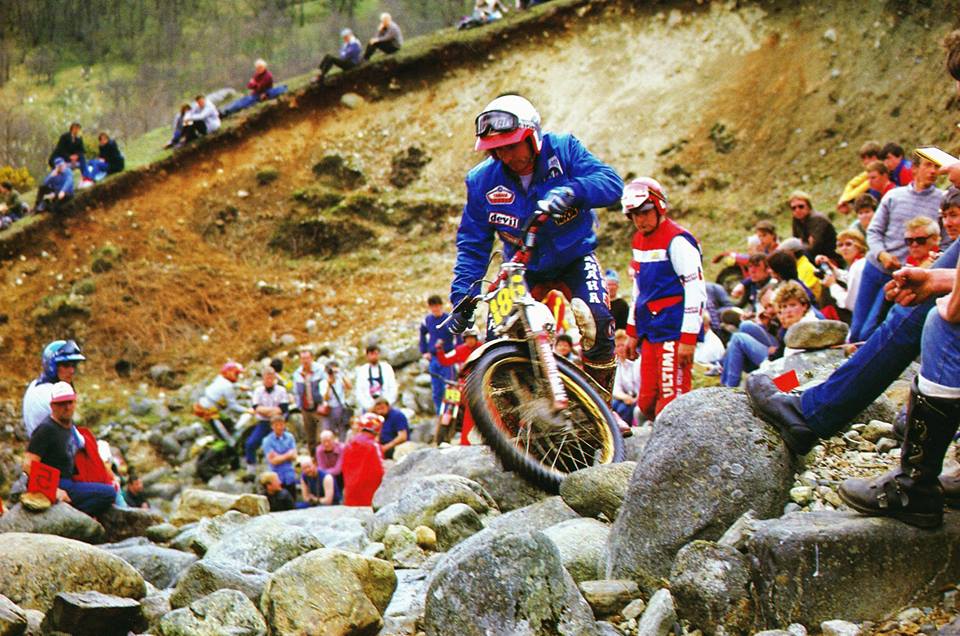 An Exclusive Interview with 1981 World Trials Champion Gilles Burgat
Photo Makoto Sugitani - Trial Journal
I would say that I did not spend as much time as I was supposed to and also at the time Eddy Lejeune was such a good rider and he was so hard to beat and he won almost everything.

So what did you do after you finished trial?

Well I idid many things after the time of me competing in trials races. The schools I had with Bernie was at a time I was racing in trial competitors for Yamaha. Also I rode the Paris Dakar rally when I was 18 in 1980, actually I took my driving test just before the race I think, 1 months before. I did it for fun in 1980, I have the opportunity to do it so I said ok I'll do it. And after when I stop riding trial I signed a contract with a bank to do the Dakar in 1987, continuing and some Arican races as well.
The leaflet advertising the Schreiber and Burgat Trials school "Pro Trial Team"  + No 75 Gilles Burgat at the 1980 Paris - Dakar race.
You know I had a very fond memories when I did Paris Dakar in 1980, so I decided to go ahead with this deal with the banks offering me sponsorship, bike. When I rode the races I did not enjoy it as much and I did, only 1 Dakar and 1 race in Egypt which was the Pharaoh Raleigh and after I decide to stop riding.
At the time of me taking this later contract with the banks, I was thinking that this was going to be a new career for me. I have had a pretty good result in 1980 and the Dakar race and big o'reilly's are pretty popular, so I thought this would be good career for me so I said yeah, so I'll go back out, this will be good for me, I have great memories of this time back in 1980 but when I arrived at the race in 1987 it was harder than I thought, you see when you are a trial rider and you were talking with trial riders everyone is in agreement that it is a long race but it is not technical and so you're going to be good.
Gilles riding at the start of the Dakar in Cergy-Pontoise, Ile- De-, France. 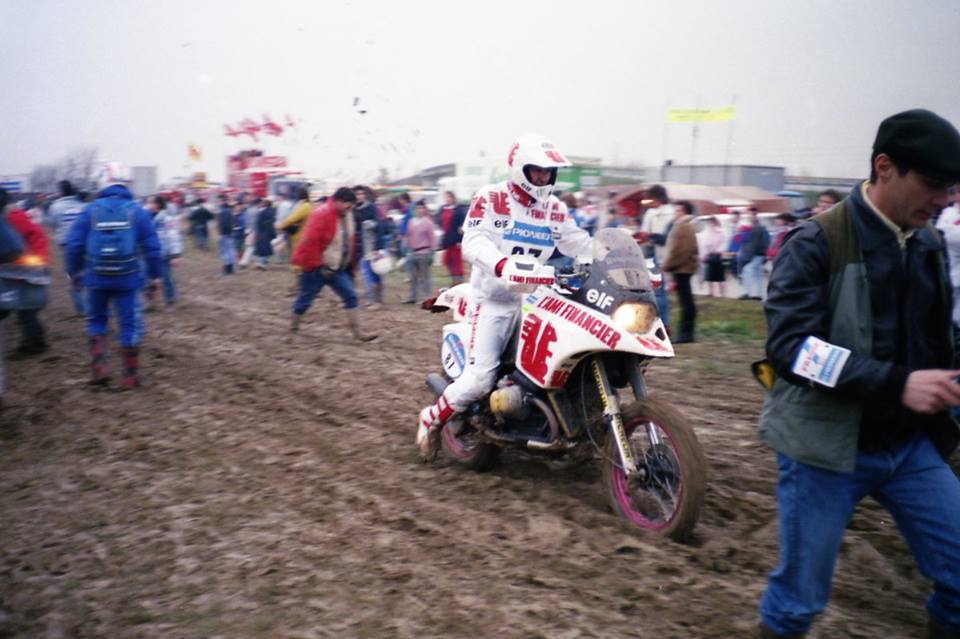 An Exclusive Interview with 1981 World Trials Champion Gilles Burgat
Would you know in the eight years between when I have been in 1980 and when I returned the professional desert races had learnt lots of things and the sport have moved on and they were very fast. I'm very focused all year, I decided that this was too dangerous for me and it was not fun anymore, it was way too dangerous. I think I was pretty fresh when I came back to the Dakar and this meant that I did not have the knowledge that the focused riders had. Back in 1987 I had been riding a BMW with a special carbon frame with a tank and the big boxer engine, I think it was 1000 or 1200 sized engine, this was a very heavy bike. When I first rode in 1980, I was riding another Yamaha xt 500.
Another photo from the start of the Dakar at Cergy-Pontoise, Ile- De- France. 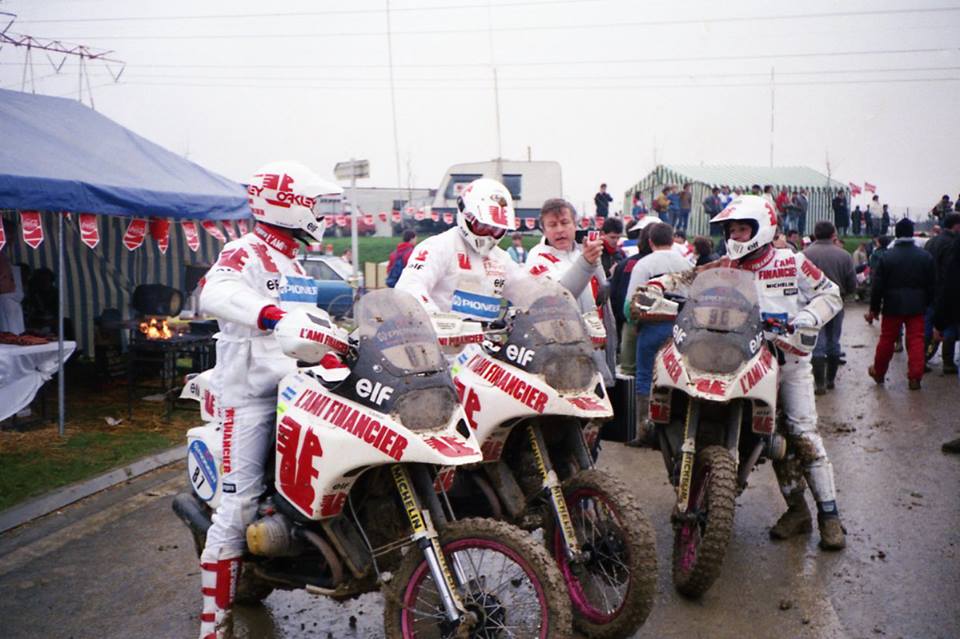 You're lucky.
I feel some different crashes but not this one. I tell you I broke my neck in a mountain bike race, It was only seven or eight years ago. I was placed on a stretcher bored and taken to hospital, I was competing in the cycle downhill race and I had a bad crash, my wife was waiting at the bottom and she was asking where is Gilles and after she is approached and told. Yes I was in pretty bad shape, I was in hospital for a week, it was a pretty crazy downhill race and is real fun. I love it but I crashed on the big jump. There was a road gap and I was pedalling so hard and when I jumped I didn't quite make the gap and I nosedived into the other side. I was peddling to much and not concentrating on the gap. You see at this time my son was starting to race downhill so I went to watch a race with them, I am 40, it seems to be fine, I'm going to try this. At the time I was riding cross-country mountain bike riding and racing in this field as well, so I went to this race I thought it look good and the next weekend I enter the race. I did this race which is my first one and I ended up with a broken neck, it was a very bad idea hahaha, it's very very dangerous.
Page 17