How do you rate that win?

I rate that as being one of the real special ones really. My first world round win in 1986 that was something special, the Scottish six days wins and then Butser and then british experts in 86 and there was the peak national british championship in 1992. Also the hoad in 1992. These are the ones that really stick out for me.

Did everything go well for you on this day?

Yes, I didn’t have any problems. I still think I made a lot of mistakes on that day but just not on the last lap, on the last lap everything just came together.
At the end of this interview there is a link to see the full report from this trial 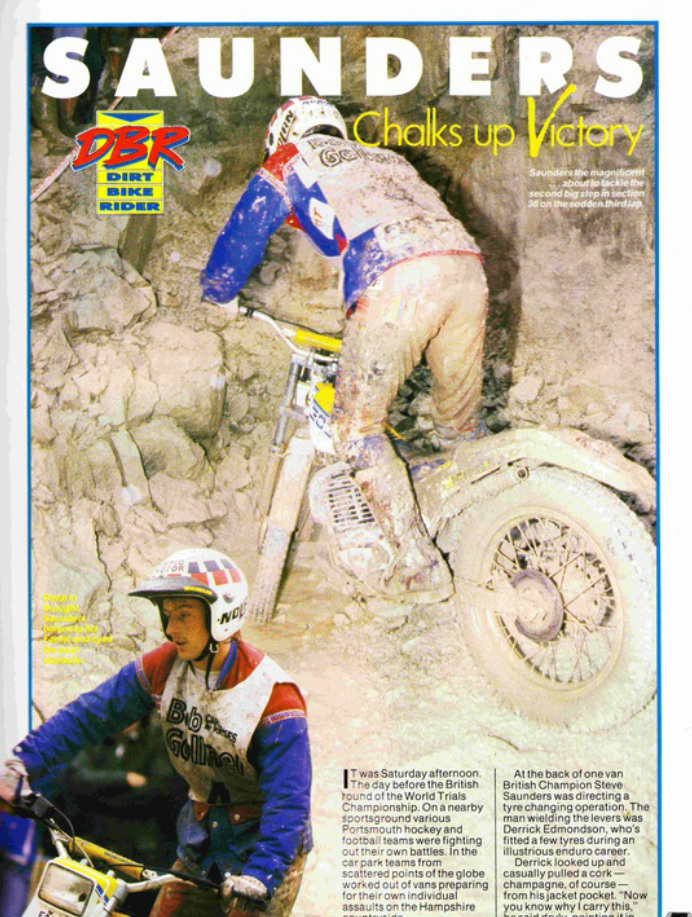 STEVE SAUNDERS INTERVIEW WWW.RETROTRIALS.COM
So do you have fond memories of Butser limeworks ?

I love Butser limeworks, if you get it back, then let me know I’ll be down for the first trial that gets back in there ha ha

Could you cope with the hot weather abroad ?

Reasonably well I think. There were a couple of occasions when it was horrendously hot. We had Austria 86, I won there. That was 43 degrees. It was boiling

What happened to your Fantic bikes ?

Finny (Jason Finn)had one and I think I bought it off him and then I sold it. Some of them went back to the factory and some of them I sold. I got one of them back from Jason. I think I handed my bikes to Roy Carey and he sold one to Finny

Did Steve ever ride the Jordi Tarres 89 Beta prototype ?

At the Italian World round in 1989 do you remember Jordi faking ?

Yes, we were practising prior to the event and Jordi turned up riding this weird looking Beta. Jordi rode around the practise area absolutely rubbish, really badly. On the day, 24hrs later he won it by a mile.

What was Special on your Fantic ?.

The only thing that was different was the exhaust system. This was very different to standard apart from that not a great deal. The cylinders were cut off at the side, but this was nothing you couldn’t have done in your garage yourself. It was just set up how you wanted
So what happened up in Scotland in 1987 when you were let down by Fantic ?

Well, I went out to the factory 3 week before Scotland to test some stuff that was going on my bike and this stuff was going to be used in the Scottish if it was any good. So we did the test, a lot of it was road work based and we were happy with all the settings we got, so I left the bike there and flew home expecting that bike to arrive in scotland and it didn’t. They opened the back doors to the van and there was nothing in there. I thought where’s my bike ?”. I did have a bike in my va  but it was my bike that I was using here. It was a reasonably good bike but it wasn’t prepared for Scotland so it was a fairly big effort to get it prepared for Scotland
What do you put this problem down to?

It was just one of those things that should not have happened. The bike was the most important thing. I thought “christ”. I think I’ve still got the fax that showed me the itinery that showed what was coming across, the bloody bike was on the schedule I know it was. 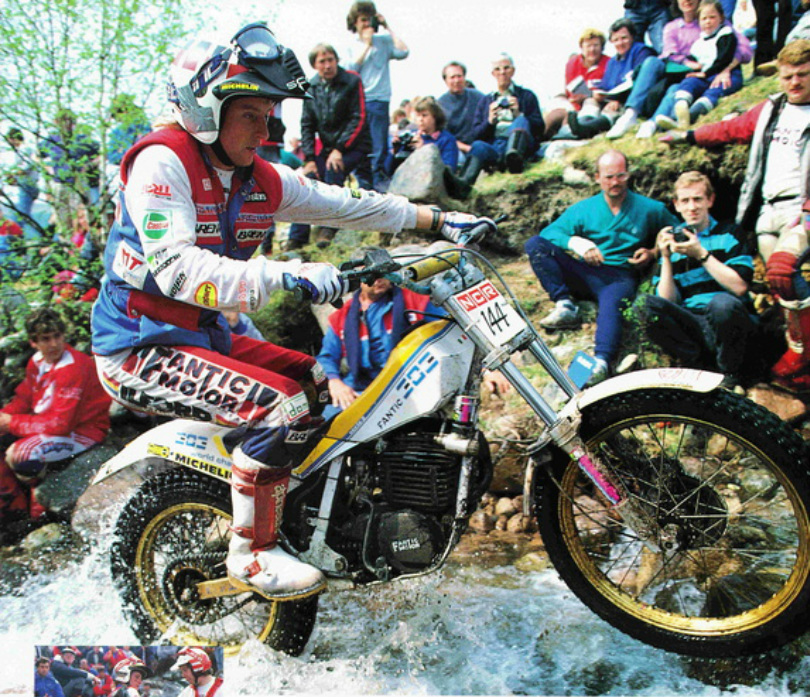 STEVE SAUNDERS INTERVIEW WWW.RETROTRIALS.COM
Fantic Importer Roy Carey and Jordi Tarres gracious in defeat, congratulate Steve Saunders on his SSDT win
Was it a good lifestyle on the road all those years ?.

Well, it’s like everything you do you forget to appreciate what you are doing and the generally daily grind of what you are doing starts to take over a bit. With hindsight I don’t think you could have it better. Obviously I love the sport, but I don’t think there is anything better that you could be doing. What I would do if I could is that I would stop, we used to leave here and go as fast as you could to where the destination was, that destination was always the crappy paddock where the trial was and then you would go practising and then you’d ride the event. You’d then load it all up as fast as you could and you’d be as fast as you could back to the UK or to another destination,  where the next event was going to be. If only I’d thought “Mondays” I’ll go and see what’s around here, but you never did it

What was your favourite Fantic ?

How did it all end with Fantic ?

Badly, ha ha. They had a year’s worth of my money so that was the end. How much can you carry on  you can’t can you. You’ve got to draw a line somewhere

Had they not been paying you during 89 ?

So what were you living off ?

Did you believe that they were going to pay you ?

We did, we did, you live in hope don’t you. You did get drip fed little bits and pieces just to keep your interest.

Do you think that this was connected to the fact that you didn’t have an agent fighting for you ?

Sarah says – all Steve wanted to do was ride his bike and get the best results and if we had just stopped and thought hang on a minute I’m not doing this for nothing like you would in any ordinary job, but it wasn’t like an ordinary job it was a passion. He was doing it for himself, not just for them.