It was a very hard section there and I was the first rider through, the riders had to go or upon for a triangle of steel and I couldn't stop when I came down. If you see pictures of what we did back then and compare it to what they do now haha there is a big difference, but at the time it was big. We have to ride through the water and over some plywood and then ride a pyramid. I went over the top too fast and couldn't break and had this bad crash.
At the time how did SWM deal with you wanting to leave because they have developed you and invested three or four years in you, you have bought a big success and as you say you are part of the family there, that sounds so you had a really good time there I know all good things come to an end but ?

Well about the reaction, I was in touch with Piero Kucklican and when they knew I was leaving they didn't try to keep me, at this time they had Bernie Schreiber and they have this new opportunity with Bernie so this was a replacement for me. 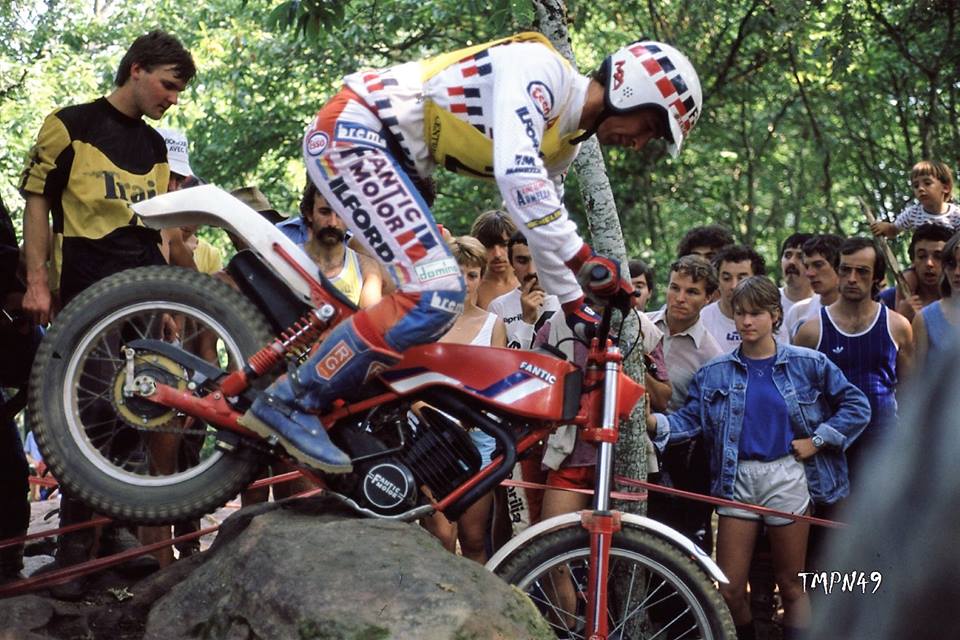 An Exclusive Interview with 1981 World Trials Champion Gilles Burgat
Did you have the opportunity to go and ride with any other factories after your World Championship win?

No because this time it was very well known that I had signed a contract with Fantic and everybody knew this.

How did the new bike from Fantic suit you?

I was riding the 240, I had to do a lot of tune up on the engine and a lot of test with the suspension just to suit it to what I wanted, but it is not as though we cut the frame or anything major like that it was a bike that was pretty much standard.

How did the Fantic compare to the SWM?

The Fantic was a lot lighter, you see at the time Fantic wanted to sell the bike that they were racing, so the bikes that we rode were almost standard and were not that special. ​

​How did you get to know Bernie?
These photos from 1986 were taken by the Japanese Trial Journal at exactly the time Gilles refers to and also Bernie refers to in his interview on Retrotrials. 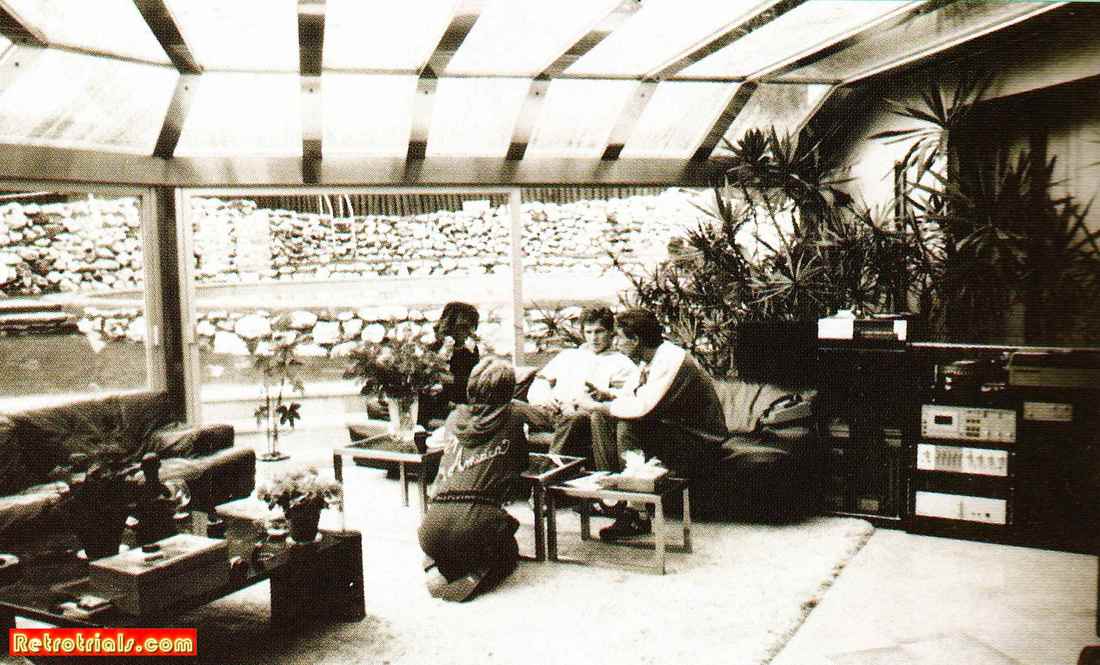 An Exclusive Interview with 1981 World Trials Champion Gilles Burgat Photo Trial Journal
At first I got to know Bernie at the trial and after he was going out with my sister and then they got married and he moved here and we spent a lot of time together. At the first period of knowing Bernie and the races until maybe 1983, he was just another rider, we are not friends or anything and after this time we became great friends and he moved to Albery and we spend a lot of time running together and riding together and going to the races together as well. We also made a small business with the trial school together in Val Desire, it was a good time, it was fun.
A young Gilles being interviewed for French Television.
At the time I was pretty well known in France and the town, they invited me to a celebration and give me the key to the town and also the town of Albertville gave me a medal for sportsman ship which is a national medal. I also got a telegram from the French President to congratulate me, so I was pretty famous at the time and on the news, it was a big deal yes, but now if you are World Champion, they won’t invite you to be on the news not anymore but at the time yes, it was a big deal.
So looking back, what do you think the major factor was of you winning the 1981 World Championship?

Confidence, it was confidence, also with a good package at the time, also my technique was good for the moment, I was bringing something new. You see Bernie was very athletic and I was also athletic as well, as technical in my riding style as Eddy Lejeune was a very technical rider and I was also technical but, I also had a good technique for getting for the sections. I had a good package, a good motorcycle, good tyres.

Some of the World Champions do actually attribute their success to specific tricks that they mastered and no one else did them so this enable them to have a lower score sheet than anybody else. Eddy tells me that a major factor in his wins was because he had the best clutch. When you mentioned technique what exactly do you mean? Bernie could float the front end.
Gilles is reading a copy of his favourite book, Trial Vintage. It was created by his friend Claudio who lives fairly close by. Gilles is a big supporter of Claudio and having seen these books myself, the quality and content is excellent. You can contact Claudio to request these picture books containing the most glamourous trials bikes here by finding him at Claudio Picture on Facebook. 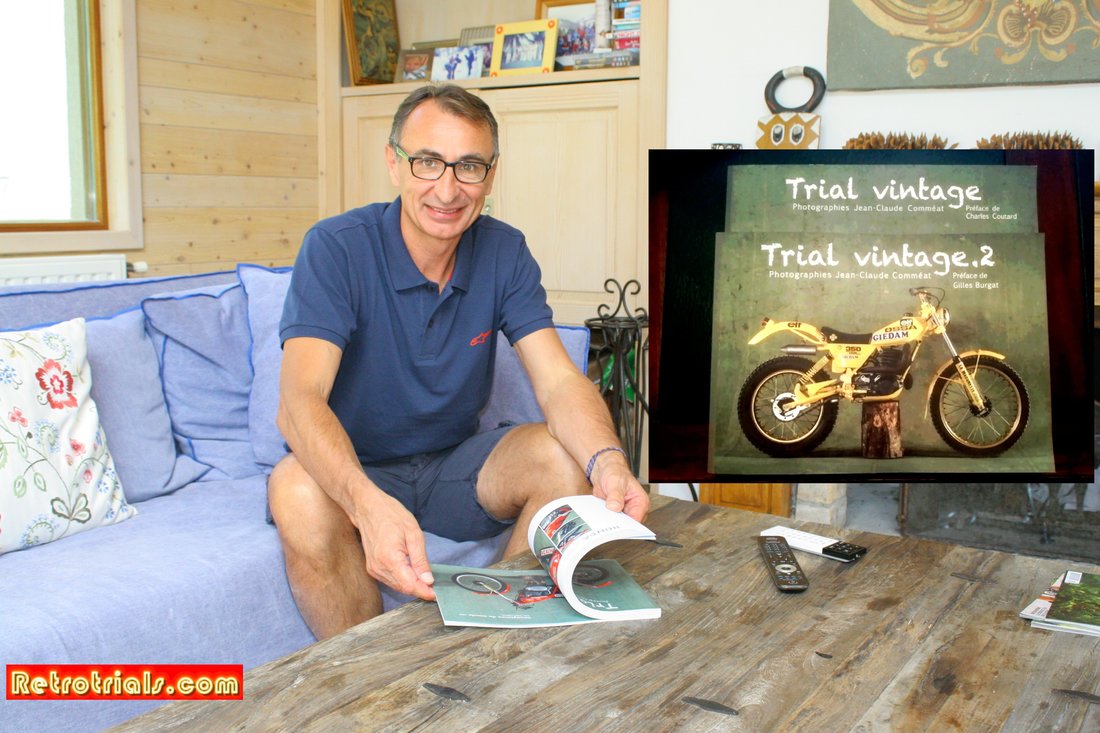 An Exclusive Interview with 1981 World Trials Champion Gilles Burgat
Tarres mastered complete trick riding. So was there a technique that you had that the other riders just couldn't do well?