What was Amos like to have as a rider?

This was at the start of Amos’s career after a short time with Beta.
For Amos I was his minder, his mother, his friend, everything you know ha ha. When we start, Amos has a very hard character and when he make 5 he do what I talk before about, but you know Amos had a very hard character and Pasquet is opposite and very quiet person. With Amos it was very very difficult. Sometimes when he starts his hands do not have the power to hold on so I have to make massage on his hand to make them stronger just before the section.
If he take 5 in one section it was impossible to take him to the next section. Impossible. After I say “let’s go “and I make a section for him. When he cleans it I say to him “You are excellent, you are the best. This is your day. Come on to the next section “ ha ha ha ha ha ha ha . Because otherwise it is 5, 5, 5, 5, 5. Many trial riders including Amos go person to help him practice to concentrate.
Amos’s was excellent rider but he was hard on the bike. When he crashed he had a big big crash.
Do you remember him damaging the bikes?

Yes, sure and breaking himself.  He would crash many times in the cross between the sections. He would crash and then go and crash again many many times. He had to take all of the power out from inside his body. He was very nervous and he no think he can be that much. He was a fantastic person and also it is very nice to stay with him because he is always happy. He is only angry when he make 5 but he is a very kind person and I have some pictures when he stay with us we make 50cc trial bikes and my son was maybe 4 or 5 years old and I have some pictures with the Fantic 305 and my son was a kid. He was also very good with the children and playing all of the time with my son.
Little me ?.....damaging bikes  ?     Noooooo ;)
Oh ....maybe just one or two :)
Did Amos stay here because he lives very many miles away?

Yes, but at this time he has a house very near here because he is always here.

Yes but only when he started in the beginning. Later he has his own sponsors

You were a motorcycle dealer here in this place?

Yes, for 25 years I was a Yamaha dealer here and also a Fantic importer. After a few times, a Gasgas and Scorpa dealer but not much.

Did you sell other makes, such as Alfer and Mecatecno.

No, because these bikes stop before I start to sell bikes. I try only to repair the bikes we sell because then you can have problems with the service and with the spares parts

Yes they are aged 31 and also one aged 26 years. They are both football players and not trial riders.

Did you ever go to the work place of Jordi Rabassa, the Mecatecno factory?

You see ..... I have been searching for the past 6 years for a photo of the Mecatecno factory. I have made a decision that I will gladly exchange 1 limb, 1 secondary organ and large amounts of cash for such a photo. My kidneys are good.  Do you have one?

We have talked about so much. Is there anything that we haven’t talk about which people might find interesting?

One very nice history which is very nice for me is about Giovanni Tosco, you know this man

Yes, Ossa and SWM rider
Jaime Subira at the 1995 Scottish Six days Trial at the Gearadh sections . Thanks to Iain Lawrie for this photo 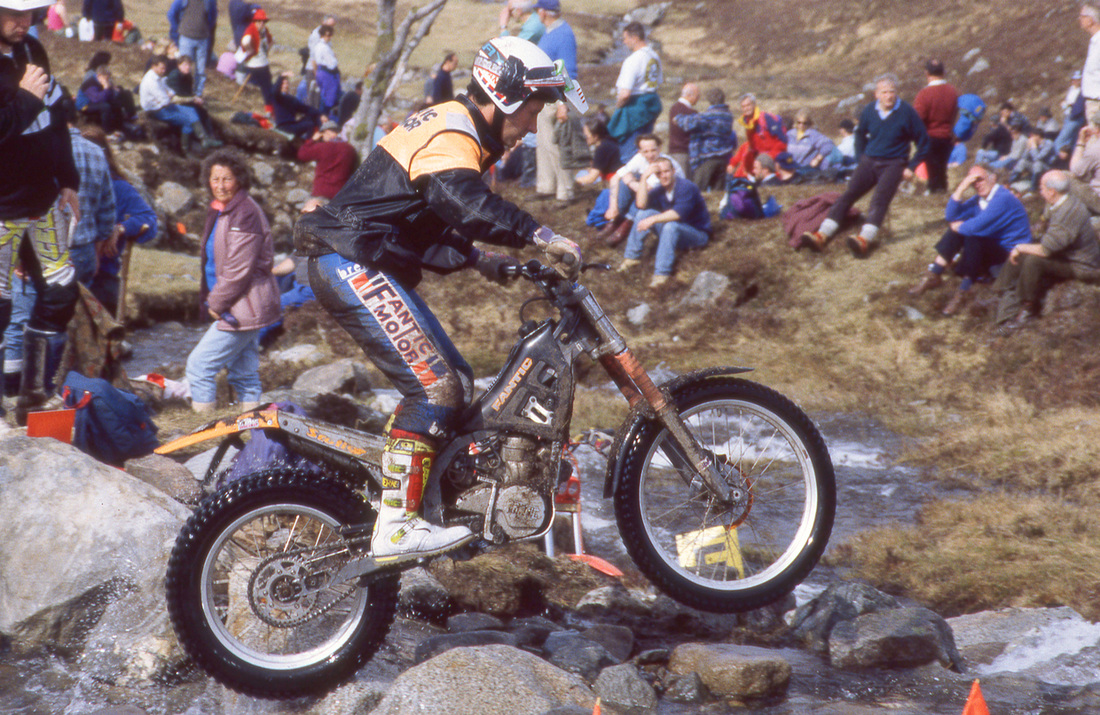