Jaime Subira during the 1980 Scottish Six days Trial at  the Cailliach sections. Thanks to Iain Lawrie for this photo 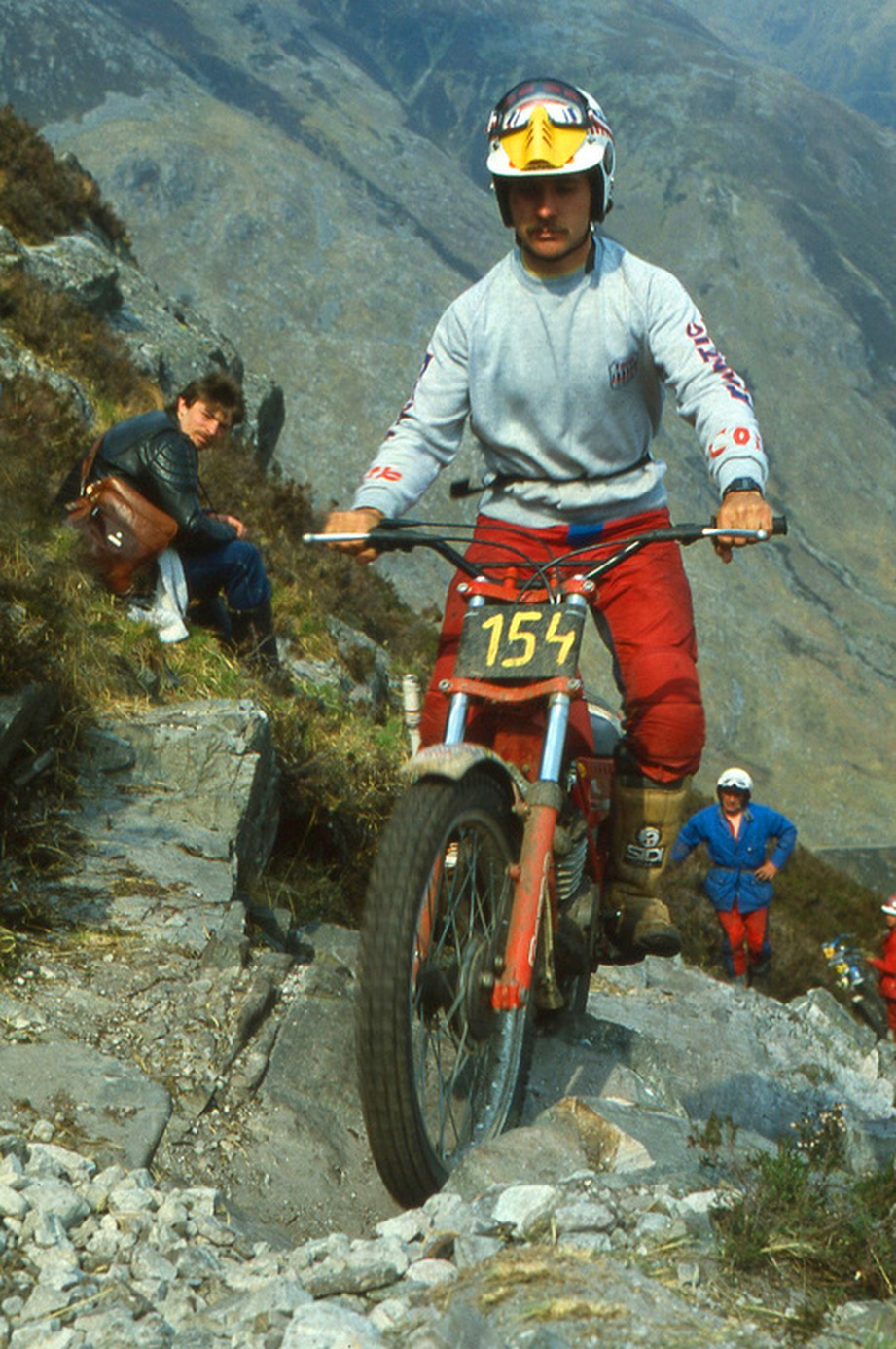 2015 Exclusive Jaime Subira career Interview www.retrotrials.com
What are you most proud of in your career?

Well for me to change to Fantic it was difficult. Nobody think that I do the correct thing. After the time everybody think that I do the correct thing so I think this is the best time for me. I risk everything and after I win.  Everybody say that they think that it was big mistake and it was impossible 156cc as this bike was, was funny to see in the World Championship. Another question which is very important is that I can’t say at the first moment is when I go out from Montesa I go Fantic and I say to them I like this in the contract and when I go Montesa and I say I am going away to Fantic. They say “no, no, stay here”. I say to them Fantic give me double money than what you give me because for a small difference it would not be normal that I would be going away to another company. So I tell them Fantic give me a lot of money and I say for example if Montesa give me 1 million peseta I say Fantic give me 2 million pesetas. At this time Montesa say to me “Ok, we give you 2 “ ha ha ha. They say this. But I say that I have already signed this, but it is not true. After everybody say Subira go Italy because of the money you know. I cannot say it’s not true because my relation with Montesa factory was good and I no want to change this. I go to Fantic with less money than Montesa give to me but everybody think I go Fantic because of money but it is not ha ha ha.

Who is the best rider you ever see. The rider you see phew he is sooo good?

There are many like this but sometimes there are some very good riders but they are not doing so much, for example Colomer. He is riding the bike incredible. For example Colomer had enough quality in riding to win for 4 or 5 years the World Championship but in the end he win one time. Cabestany is riding fantastic and I remember when I support Pasquet, Cabestany was riding very very good but Pasquet win to Cabestany because, you know. Sometimes there are very good riders but they no win. Vesterinan I think is riding bikes maybe he was 60 70 % of Manuel Soler and Lampkin but he wins. Vesterinan was a very good rider sure but riding the machines got a big difference, maybe my kind of riding was similar to Vesterinan but my head was    ..... Ha ha ha ha.
Another question...many times Vesterinan wins many times World Championship because at this time all the riders practice in his country. Vesterinan cannot practice in his country because always the snow and cold so he was in England and Spain and France always. He was the one that knows better all of the different countries. He was very very clever but not only in the race. Before the race and after the race. So I think he wins many times because he is very clever and he travels around and he knows what he has to do. If you know what you have to do at a certain place you can put one foot down, maybe two feet down and get low mark. If you don’t know this you will try and get five. So he prepared very well, how we have to do the trial.

Jaime Subira during the 19 Scottish Six days Trial at  the Muirshearlich sections. Thanks to Iain Lawrie for this photo 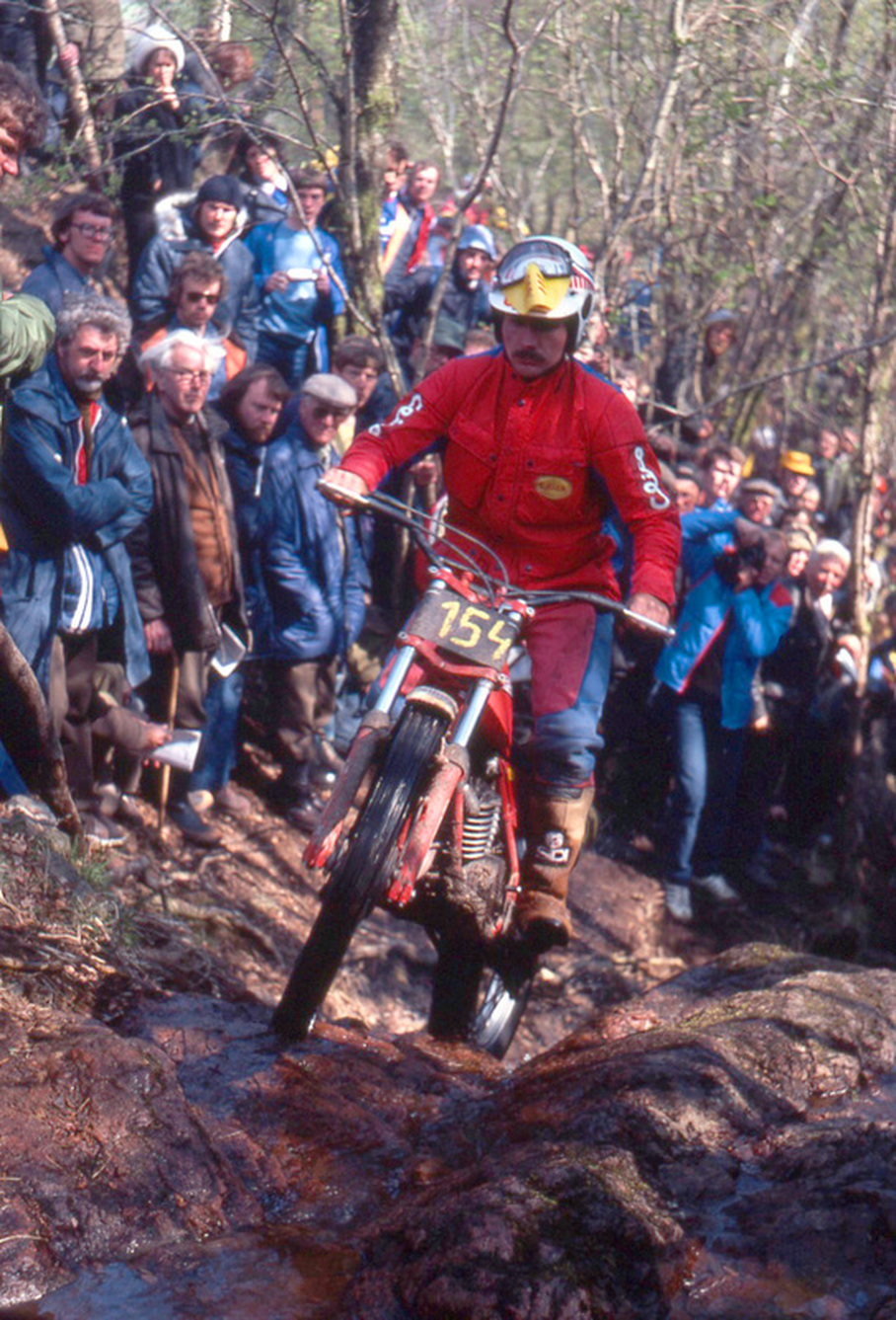 2015 Exclusive Jaime Subira career Interview www.retrotrials.com
Looking back now, do you think there is anything that you could have done to make you a better rider?

Experience, when you get old you are not so good but you have the advantage of experience. So if you can start again sure you will change a lot of things ...but not before. I did as well as I could then. When I go out of Montesa, Montesa say to me ohhh you are a boy who likes bikes and we make you into champion. You make a person now. I say to them “when I stay here with you I work 100% all of the time to do it well and I spend all of my power to do good for Montesa, so I think I am free with you.” I think this is my heart. I do everything and to fight and to win and to do the best for Montesa. I think this is what I think about me. I do the best I think.
Who is your best friend in the trial?
Jaime Subira, Miquel Ciera and Pedro Pi playing the popular game of motoball in Sabadell
Jaime Subira at the 1981 Scottish Six Days Trial at the Callert Falls sections. Thnaks to Iain Lawrie for this photo 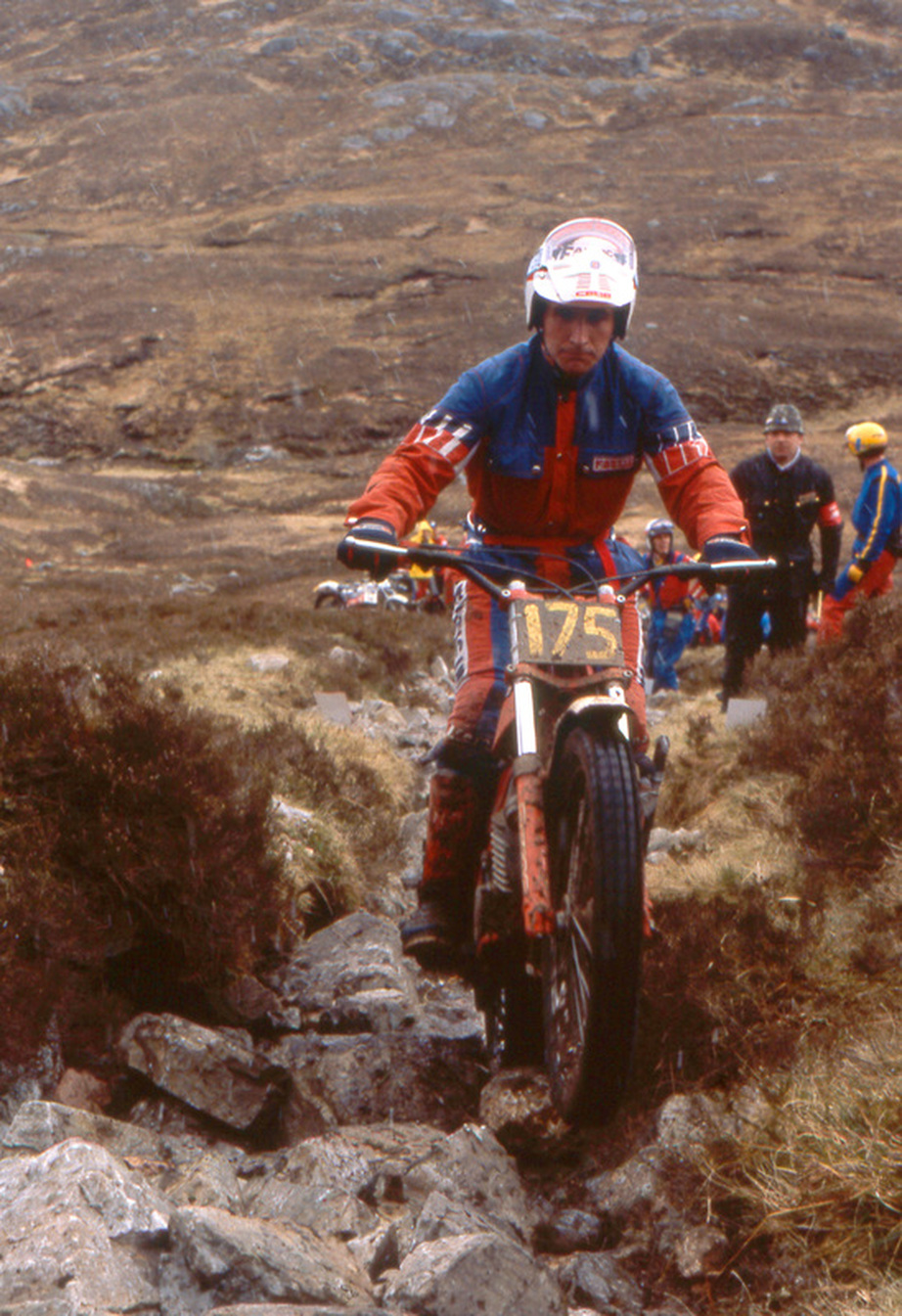 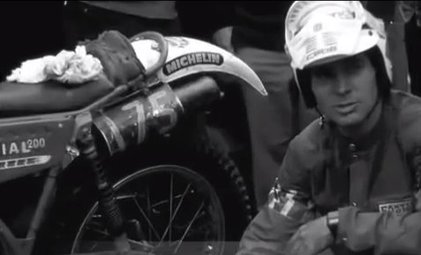 2015 Exclusive Jaime Subira career Interview www.retrotrials.com
I think Manuel Soler still now ha ha. We are very good friends but also Miguel Cierra is a good friend of me. Many people ...Gilles Burgat. When I was at Fantic with Burgat we were very friendly because always what I try and I think was better I pass to Gilles and he is also very friendly with me. Also Michaud. Ulf Karllson when he was with Montesa.

How did you get the Fantic importership?

When I leave Fantic there was a Fantic importer here in Spain but it was not going so well. They were called Como International. They say to me Jaime we have sold a lot of bikes and we need someone to do support because we don’t like to go on with this job and we have to stop this job. Please help us. Try to import parts and bikes and to do service to all of the users and I start like that. 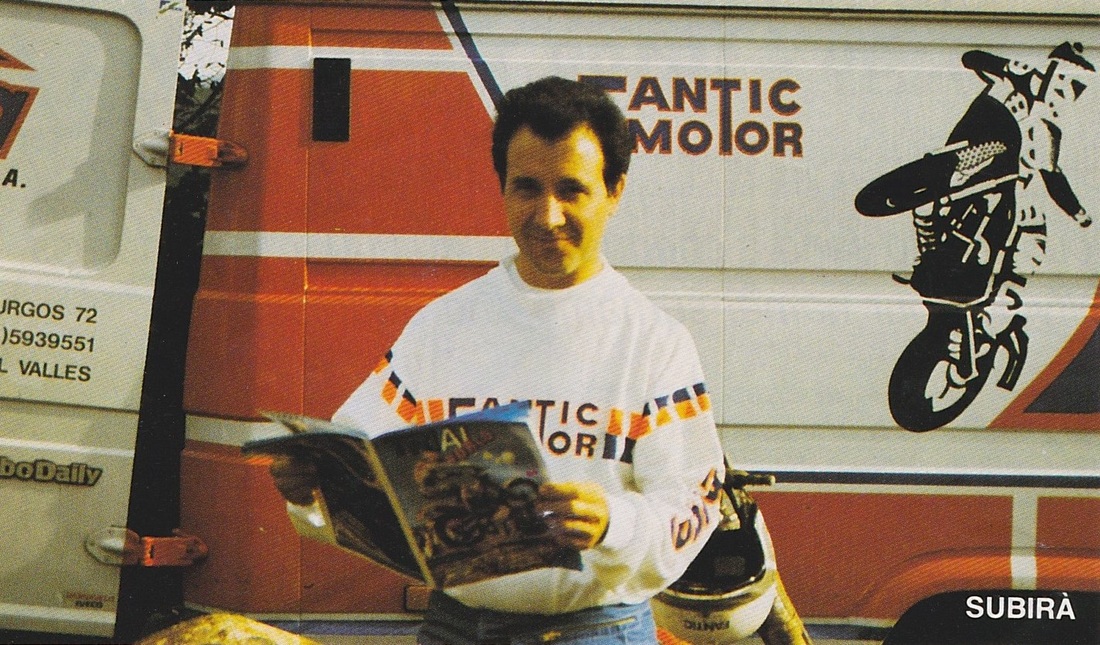 Ohhhh I have had so many Fantic riders. One in the beginning was Amos Bilbao
The above Fantic advertising brochure shows Amos Bilbao with Jaime's son Ricard.
Below is a proud father and Ricard Speed Skateboarding.
Did you sell a lot of Fantics in Spain?

Yes, many many I started to import the 300 Fantic so it was a long time ago around 1983 or 1984. At this time I sponsor Melcior Estorch and after Amos Bilbao. The last one I sponsor was Jordi Pasquet. I start with him in junior and he wins the Junior Championship and also after the Senior Spanish Championship and the European Championship. He start from Fantic to Montesa because Fantic start money problems and all these things and I still help him with the Montesa. So I was the Fantic importer but I go the trial without money and help him with Jordi on Montesa. This is what I say, the persons for me is more important than the business.