Did you have problems with your clutch on the Honda?

The standard clutch on the 85 bikes are complete junk. They were the only down side of the bike. In 86 we had completely different clutches on the bikes. They were fine.

How many 86 bikes did you have?

Did Honda sort the Ellgren gear out?

That was sorted out between Eddy and I. We were dictated to for places for sponsor  names.
Was the van at the time yours , or was in owned by Honda ?

It was Hondas van
What were the highs and lows of the bike?

Do you consider this year to be the highlight of your career?

Hmmmmm Yes ,really. There are a lot of things , with hindsight , id like to go back to 1986 and do things differently.

What would you have done differently?

Well , just all the things I made mistakes on ha ha

What happened in Italy in 1986

He did have an inroad and had been there several times before on his 360 . We had the Japanese guys there and I don’t know. Maybe Eddys style and my style of riding  and the different engines . my style of riding emphasized it more as well.

Back in that round would you have spoken to Eddys mechanic about the issues you were having ?

I wouldn’t have , but I would have thought my English mechanic would have spoken with the Japanese mechanic and he would have been the central point for all of us. He would have had all of the information . We did try  a whole heap of things. 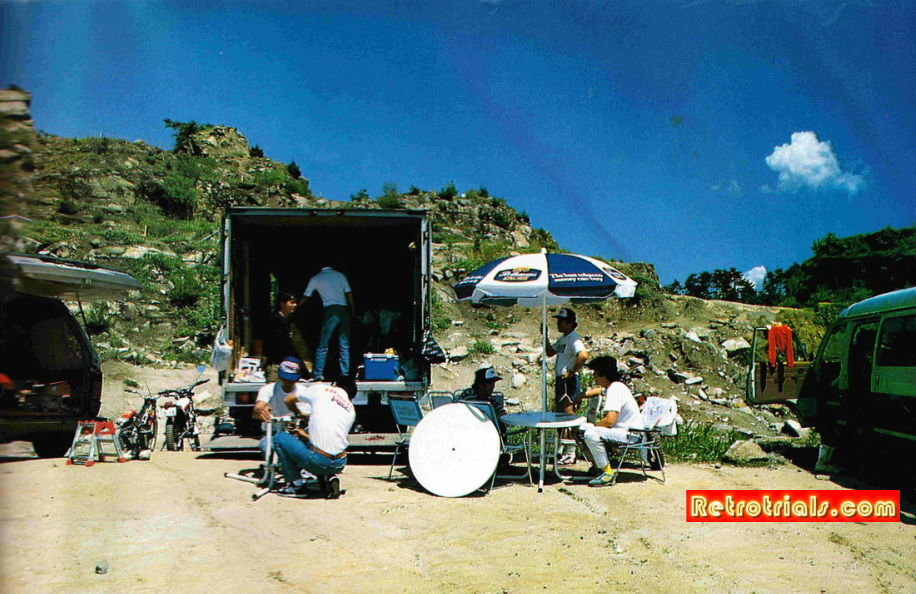 STEVE SAUNDERS INTERVIEW WWW.RETROTRIALS.COM
How did Derrick come into the picture and introduced into this deal?

He was riding for Honda Britain’s British Championship Enduro rider. Honda Japan were looking for a mechanic and I guess Honda Britain knew he was quite good and they said go off and do that. That’s sad when you are British Enduro Champion and you are taken off riding your sport and go off to mechanic for some spotty teenager on a trials bike.


Well if you think about it Honda didn’t offer him a continuation of the contract !!

Yes I think it ended it. I think he could probably have won again in 86 but because Honda wanted him to work for me.

Would Derrick be allowed to strip down engines or not that involved?

Yes, anything he wanted
Where would he keep the bike?

What happened in Germany in 86 with Michaud?

Ha ha. Sarah’s eyes rolled as she knows the pain this still causes Steve . I said “do you know about this ?” Steve said “Only In as much as I moan about this all of the time as it cost me the world championship”.
Did Michaud get excluded ?

At the event they excluded him. It then went to an FIM tribunal and how on earth anyone in a powerful position could re-instate somebody. A committee of a number of people. He got reinstated to the position that he would have been in at that trial, but he never got his five cleared. This put him into whatever position it was. He got reinstated and he got his world championship points back. We’ve all done things when we’ve been given a 5 that were really not proud of, I’ve done it on numerous occasions and I’m not proud of it but I had not ever come close to touching an observer. For anyone to get away with, I’m not saying swearing at an observer is acceptable, cos it’s not, but punching an observer is most definitely. For him to be reinstated was a real shame on the FIM’s behalf. Yes you could say I’ve got an axe to grind because it did cost me DEARLY but I think I think it’s reasonable and fair to say that.

Was this that last round?

Yes. He went from being one of the Worlds best riders to being a real average clubman. It was absolutely unbelievable. This was the last round of 86 in Finland

Was it nerves, was he stressed?

Did you get any weird phone calls in the middle of the night?