in 1986 Merlin had completed their development of a monoshock Trials motorcycle to replace the aging twinshock bike. It was in fact Josep Paxau , working for Merlin as a fabricator who created the FUIS.
Paxau has a small shop and workshop in Torino, Spain , in the middle of the Pyrenees mountains. It is a difficult and time consuming place to get to. It is here that here that he develops productions motorcycles for the main Trials manufacturers in the World.

His workshop is staffed by one full time mechanic. It is a very neat and tidy and well organised place. When you enter the workshop the hallways are lined with Prototypes going back many years. These bikes have cuts and welds here and there and many are of the same model as efforst are made to get the final product just right. It is once the bike is right that Paxau then drives the bike on his trailer to the manufacturer. Paxau has worked like this for Bultaco , Merlin, GasGas and Sherco.

I visited the workshop in 2011 and met Josep . He is a very welcoming and friendly guy. I believe he leaves a lot of work now to his mechanics, perhaps because a lot of the work on riders bikes is repetitive.

Paxau finished developing for Bultaco when they closed and hen worked for Merlin. He was only allowed to work for one company at a time.He helped design all of the Merlins. His personal "Paxau" Stamp is on all of the Merlins to show his involvement.

In addition to working for Merlin , Paxau also developed his own Monoshock bike , modelled heavily on the existing DG350 Gallach replica. Only one was produced and it is pictured below.

When Merlin closed , Paxau worked for incoming factory tenants , GasGas , but of course from his Torino retreat.Paxau developed the first GasGas with Pibernot and Casas. This is the white GasGas Halley and only a small number were produced.

Paxau developed GasGas over many years resulting in much of their success in sales and World Championship titles.

The below has come from good sources , but cannot be 100% confirmed. It is all alleged.

Although it cannot be proved ,i was told by two reputable sources that whilst working for GasGas , Paxau moonlighted for Sherco . This is why the first Sherco was so similar to the GasGas of the time. I am also told that Pibernot and Casas the partners and owners of GasGas discovered this and also that some of their actual parts were being used on the Sherco. GasGas stopped working with Paxau immediately and brought all of their development in house at their factory, appointing a new director of R and D.
The above has come from good sources , but cannot be 100% confirmed. It is all alleged.

In 1986 Merlin released thier first monoshock Trials motorcycle. The chassis held the 5 speed Cagiva engine from above. The bike was suppied in white only and featured alloy 3 spoke wheels which were then , and still are very different and striking in thier design. The alloy rims and spokes were tied into magnesium hubs made by a local Barcelona based firm., Nagesti. tublmess rims were fitted.The Merlin competed in the World Championship in the hands of Pascal Couturier but had limited success. The motorcycle sport governing body in the Uk , the Auto Cycle Union recognised a safety risk in potentially limbs being caught in the driven rear wheel and causing injury. Hence the ACU introduced a regualtion ensuring that any 3 spoke wheels were blanked off. This can be completed with transparent spacers , which are hardly noticeable.
The Merlin chasis was made from surprisingly thin tubing which put up with the abuse well. The swinging arm was steel, painted silver. Hidden under the seat and being about 350mm deep x 20mm thick and 100mm wide was a cast alloy spine which connected the swinging arm to the frame and rear shock.The cagiva engine exited its exhaust fumes into 2 cylinders under the headstock which reduced the noise output and helped increase back pressure. If you look below you can see them.
The Merlin FUIS was Merlins last Trials motorcycle The motorcycle had great power but suffered as it was a little heavy.
Merlin contined thier red 1988 FUIS untill late 1988 when the company fell into financial difficulties created by lack of sales. 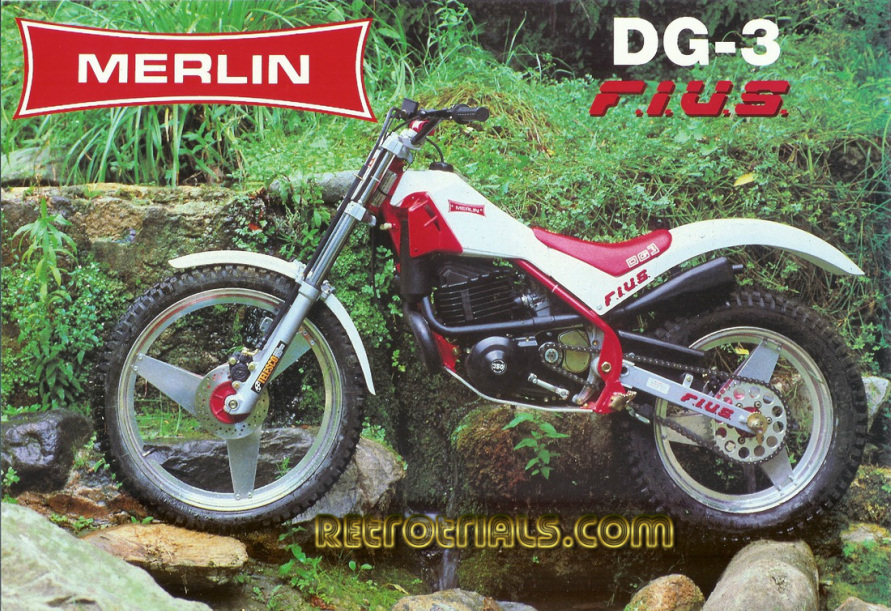 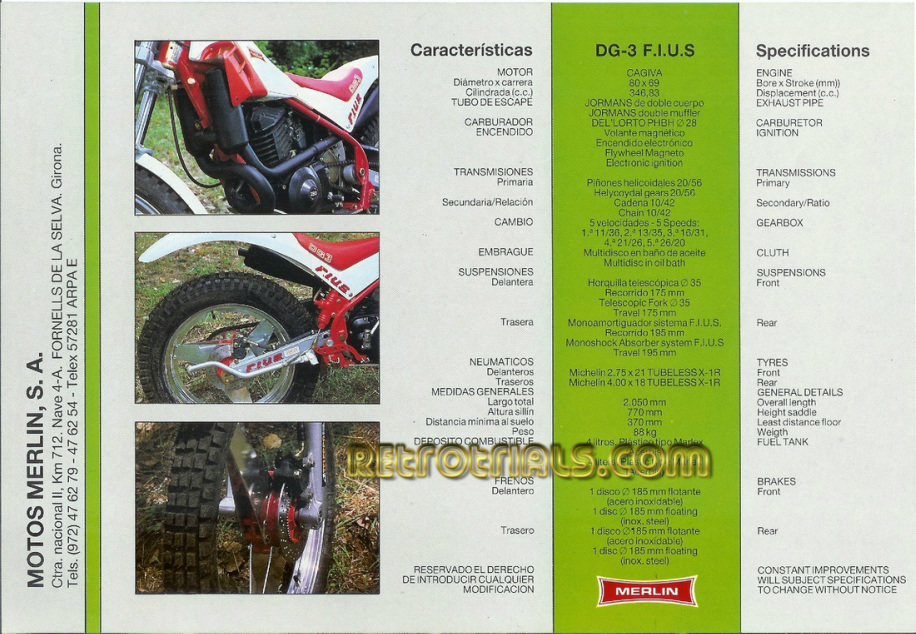 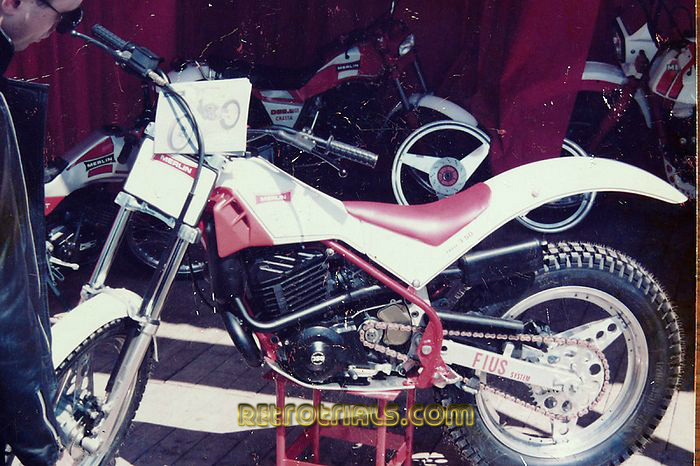 This is a photo of the 1986 launch of the Merlin DG350 FIUS on the Merlin stand at the December Barcelona show. Look at the other Merlins in the background. 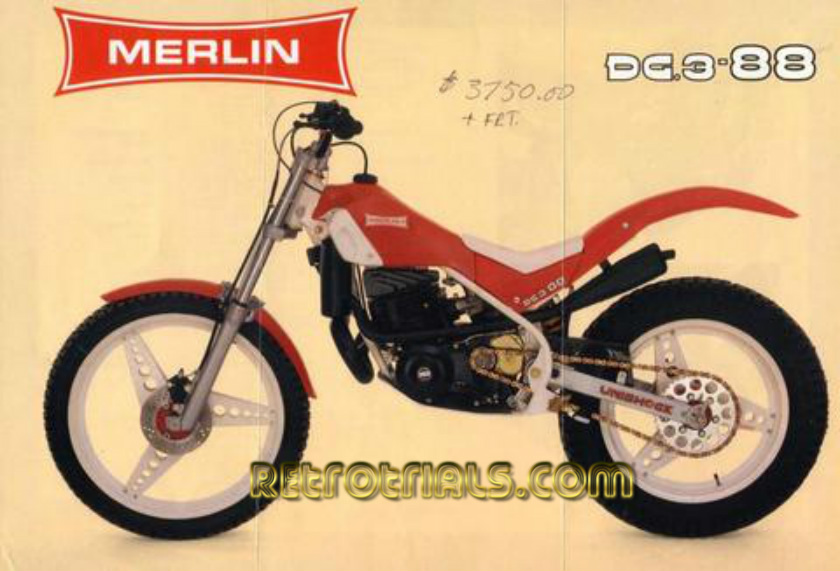 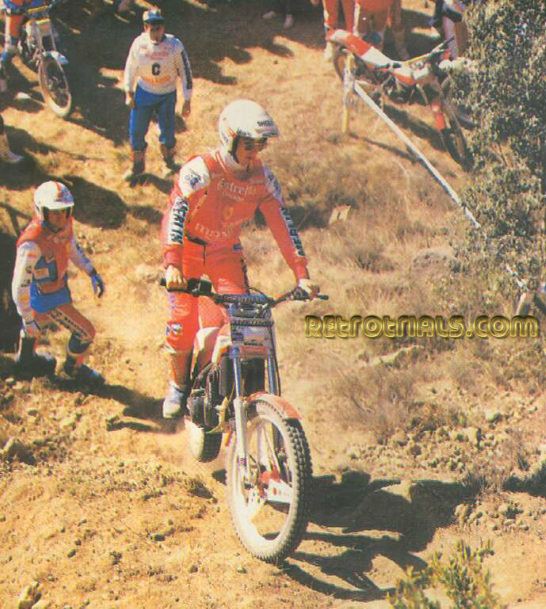 Lejuene on the Merlin 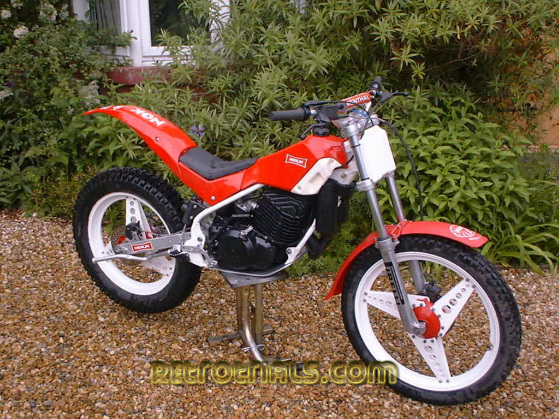