That’s where I learned Italian as well, Ettore Baldini as the only guy back then that kind of talk English at the factory so I would do everything through him. He would live about 400km from there so he would arrive on Tuesday and leave on Thursday to see his family. Normally I would go to practise somewhere else on weekends, always do something but one weekend I was stuck at the factory for some reason and Ettore said that this weekend you can stay with our trials team manager, Sergio Bonaldo. Let me tell you it was pretty quiet at the dinner table when he doesn’t know a word of English and I don’t know a word of Italian. We were there rolling our thumbs thinking …this is funny ha ha ha ha. So I remember that evening, so I took a little Italian, Finnish, English book and studied that night 30 words, basic words. Me you, today tomorrow and numbers one to 10 and then I started communicating and he would repeat it that what you meant and I would say “I think so” and I was just guessing so anyway, I’ve always been a very good monkey so I always remembered right away what he say and then I remember the meaning of it and so I learned the language pretty quick there actually. In a couple of months I could communicate with them and after 6 months I could speak it pretty good.

Of course Italian being the most important language at the World Round circuit it was really important that the Italians would take you into their family. You are one of them when you at least try to talk their language and also it made it easier to communicate with the mechanics and the factory when I knew the language. I’m kind of proud that I am the first ever World Champion for Aprilia as well. The road racing guy won the title the same year but I won it by 10 hours, and he won 10 hours later. I was first ever World Champion for Aprilia. That’s basically whey they had trials as they thought it would be easiest to get a title for Aprilia with trials as there is relatively low investment so that’s why they had a trials team.

When I started with Aprilia, Diego Bosis was the factory number one rider. Him being a very good rider and being my idol this had an effect to as they said I could go and ride with Diego and we could ride together so that was a pretty good deal to be able to ride with a good rider like Diego.
Diego Bosis and Aprilia - True Icons 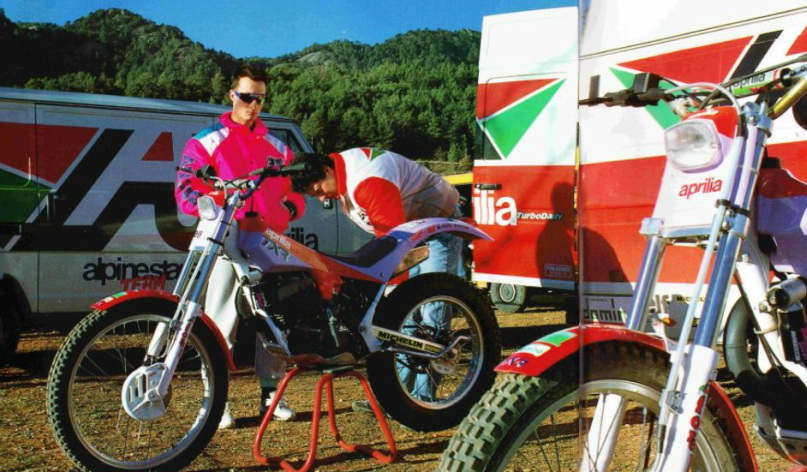 2013 Tommi Ahvala Interview WWW.RETROTRIALS.COM
Did you practise near the factory?

Practising wasn’t very good there. We always had to travel about an hour to practise but we could develop the bike and we could keep the bike at the factory and try new things.

Were you with your parents at this stage?

No, I was with my brother. My parents still had to work. They came to some of the World Rounds as much as they could.

Did you have your Aprilia truck at this time?

They were trading their old van at this time for the new one, a similar Iveco vehicle. I think for the next contract, must have been two years later, I negotiated I need a van as well. It would be a good help for us, so we worked that into the deal as well.When I had my Italian Aprilia van I always parked in the principal’s place right next to the door and he never said anything he always parked elsewhere. It was the only place that was big enough and of course it was right next to the entry door.

Had you had an opportunity to ride the Aprilia before you signed up?

No.
When Tommi joined Aprilia he rode this air cooled TXR 312M for just a short while before the watercooled model was available. 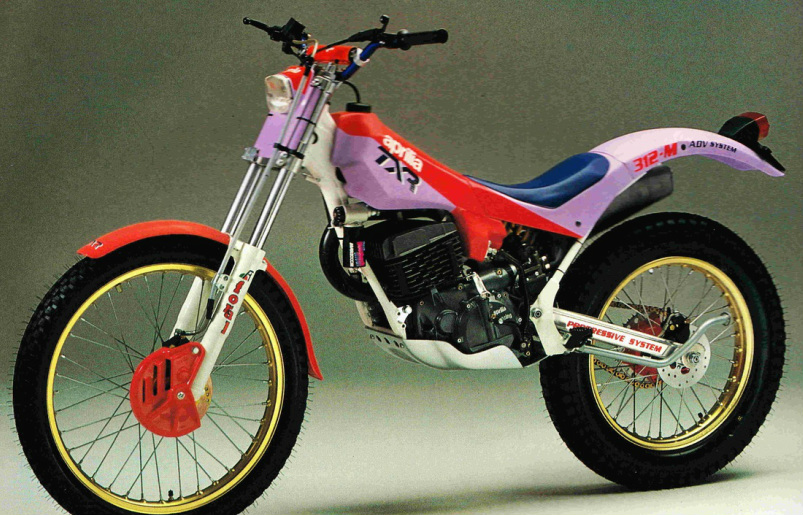 2013 Tommi Ahvala Interview WWW.RETROTRIALS.COM
Had you ever ridden an Aprilia before?

No, we didn’t have Aprilia’s in Finland so I never stepped on a bike at all. I think at the factory they let me ride the old bike, but not the new one that was coming out. I just rode the normal production bike Aprilia and they let me ride that. They said I could take this home right away if I sign the contract we give you a bike right away. Before that I’d never ridden an Aprilia.

It must have been an exciting time for you?

It was a big risk. We didn’t know what we were stepping into. The Fantic factory got really mad when they heard that I had signed with Aprilia just the day before we were supposed to go there and I already rode a Fantic so it was kind of disappointing for them but for the same time I was excited as it was a growing company. It was a pretty good sized factory already and they had an impressive team so I was excited at the same time.
Some close up photos of the Aprilia TXR 312M
Were Aprilia really pushing themselves on you and being quite salesey?

Yes, yes. All the factories were like this too. But with Aprilia, everything seemed to click there and they had a good program and they said they would put a lot of effort into me as they saw the potential in me. I was 16 at this time.
You achieved an amazing result of 4th at the home Finnish round on 28/8/88. This was a huge improvement on the new bike. What can you remember of this day?
It was like I said. My father organised this race and I never tested a section but of course I knew every rock there because it was my practise ground. When I have a lot more pressure I seem to go better so I guess being at home with a lot of friends watching and media coming to see me there. I felt that I really had to do well there and I remember everybody thought it was because of my home advantage. Luckily a couple of weeks later when we had the TDN in Poland I finished 5th there as well, so I could say “I guess Poland is my other home and I must have a home advantage here as well“. Ha ha ha.