A view from the training block roof onto the factory undergoing building work. This factory is now also a European car and motorcycle parts storage depot. 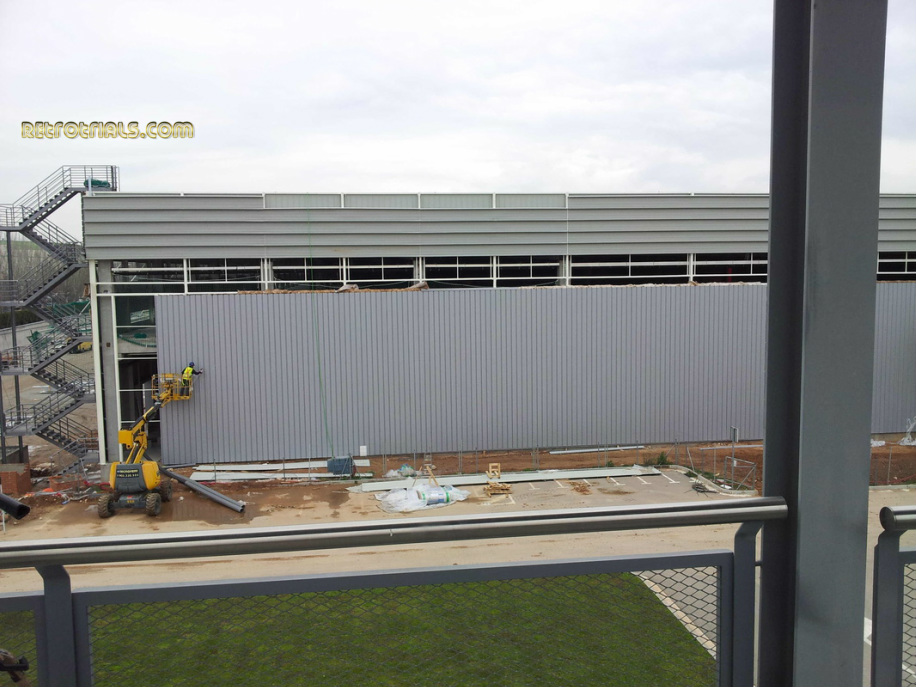 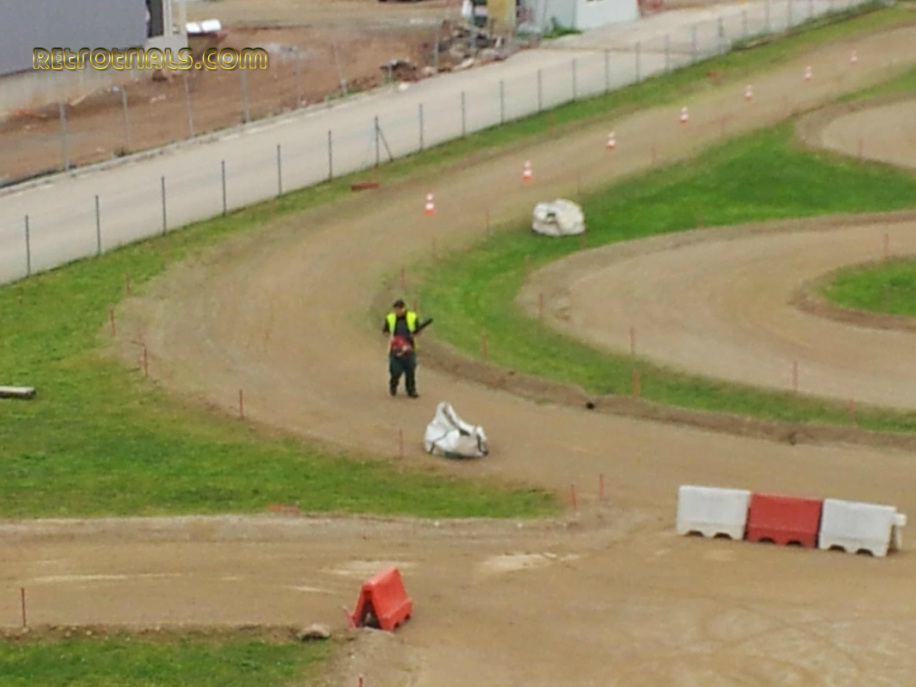 2013 Montesa Trial factory tour Toni Bou Takahisa Fujinami WWW.RETROTRIALS.COM
This is where the beginners first ride off road Honda bikes. On the right is the tarmac track . Families can watch from the covered areas you can see. 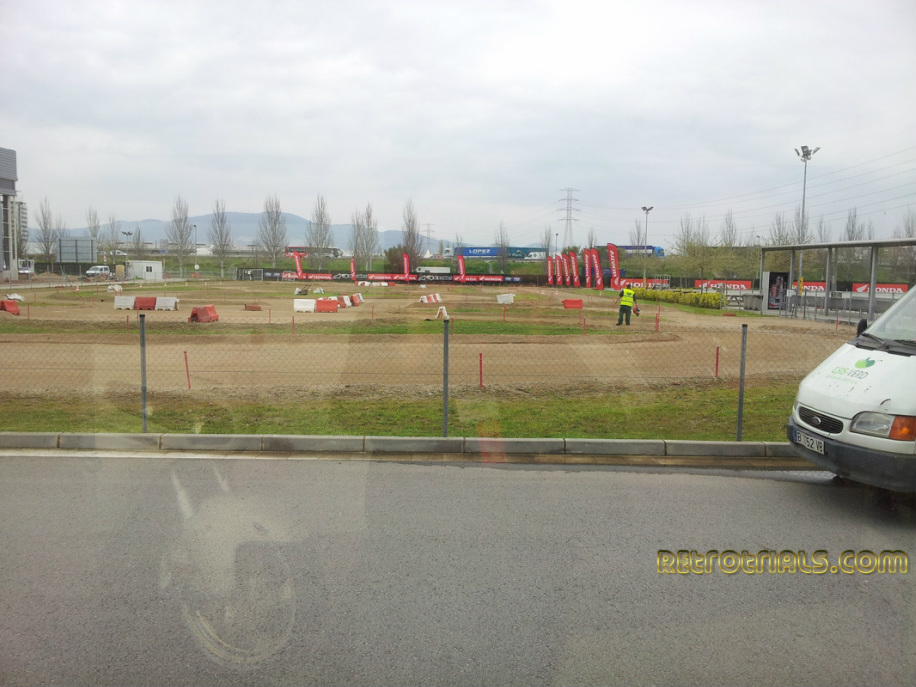 2013 Montesa Trial factory tour Toni Bou Takahisa Fujinami WWW.RETROTRIALS.COM
Slaloms, figure of eights, brake tests, emergency stops. You name it, it all gets practised here with clients from as far away as South America and Russia. 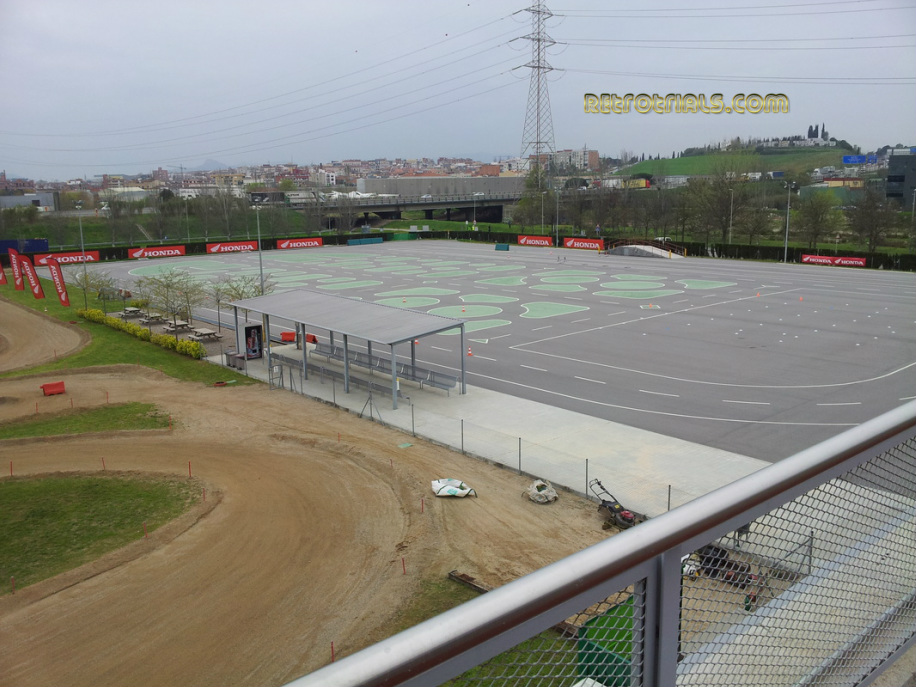 I'll explain something to you first. I was given permission to take these photos for my web page, Retrotrials.com.

Immediately after my visit to the factory I went to Josep's house where I was staying. Using my phone I posted one picture using his WIFI of the new prototype, not unveiled Bou bike on my Facebook page and then went to sleep.

The next morning Josep and I were on our way driving to the GasGas factory when Josep's phone rang. It was Oscar. Josep was silent as Oscar spoke for 30 seconds non stop.

Josep turned to me and said "Do you have internet on your phone". I replied "No". He replied "You will need the internet quickly". I explained that I could get a data plan easily". Josep repeated what had been said down the phone to Oscar. I could immediately hear that Oscar had a problem and was telling Josep about this. The conversation was serious. Another 30 seconds passed of this serious conversation and the call stopped. Josep turned to me and said "We must pull over. There is a big problem. The Honda men in Japan see your picture and it should not be on internet. Oscar is in trouble and say you must remove this now". I immediately agreed. Josep said that Oscar was really apologetic as he said he had checked with Japan, but now they had changed their mind. They were now very concerned in a really big big way and Oscar was getting calls from his boss in Japan. I dived onto my phone and deleted the photo, but it was to late, Honda Japan was annoyed.

So this is the reason the release of these photo has been delayed for so long. I don't hold anything back, this is exactly what happened. Oscar said he would have to get permission for the photos to be shown. I knew that Honda were dreadfully secretive and also knew I had just one chance to get my photos approved. My high res photos showed part numbers, piston sizes, calendar appointments, computer screens, trials lists, letters. Zooming in, I could see loads of details I knew Honda wouldn't be happy with. I then went through everyone one of the 270 photos and carefully examined them for sensitive information and photo shopped it this information out.

Once this was complete I sent them all over to Oscar for him to check. This is why its taken so long. I only want Honda to be happy.

Honda do not allow pictures of the 4RTfactory, so I have drawn it instead :). Its not as good obviously, but it will explained to you the layout, the size and persons involved.

After we had walked around the training block we returned to the main factory building and walked past the bikes that you've seen already. We then went behind the scenes and into the factory area. I was told "No photos of the factory please".  Photos of the competition department were allowed, but not of the factory.

If you see faces or views through windows masked by smiley faces, the reason is that the employee or Honda wanted this masked. Photographers don't ever visit here. The employees were a bit embarrassed at having their pictures taken, one in particular. As you see the masked photos, you should be able to guess who the shy man is :) .

So, this is the second I walked through the competition department. The door is immediately behind me. 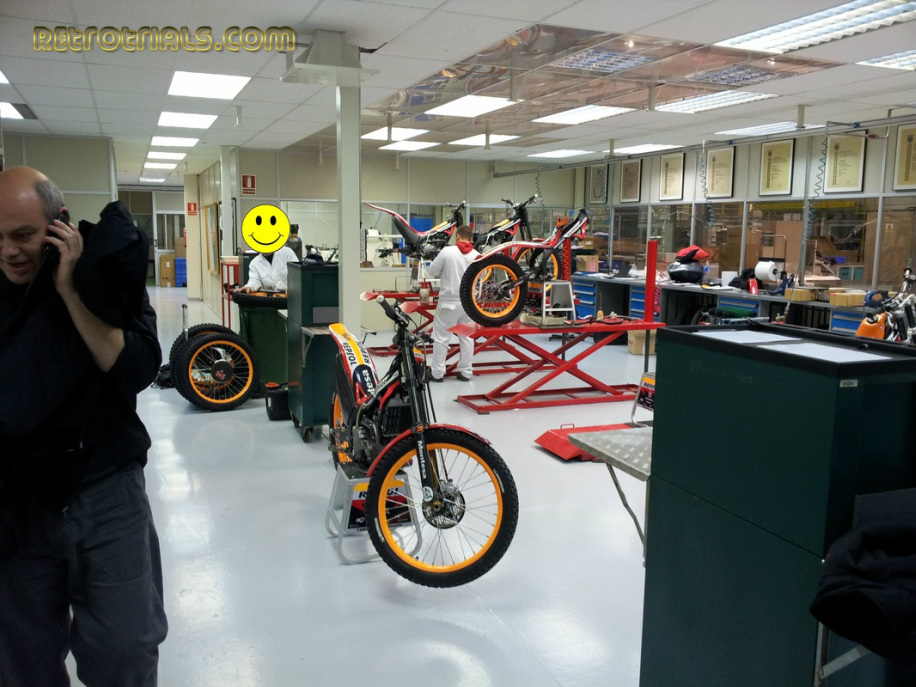 2013 Montesa Trial factory tour Toni Bou Takahisa Fujinami WWW.RETROTRIALS.COM
Toni runs with 2 bikes at any one time. One is for practice and the other the trial. Sometimes he may ride the practise bike in the trial as this is the machine he is happiest with. At the time of our visit both of Toni's bikes were here being prepared with Fujinami's bikes also. The next day the team was leaving for the first round of the 2013 Spanish Championship, which would be the moment this new prototype, with the new engine would be shown outdoors. The bike had also not been revealed in Japan  , which is a very important market for Honda. Fuji's bike below does not have the prototype engine. 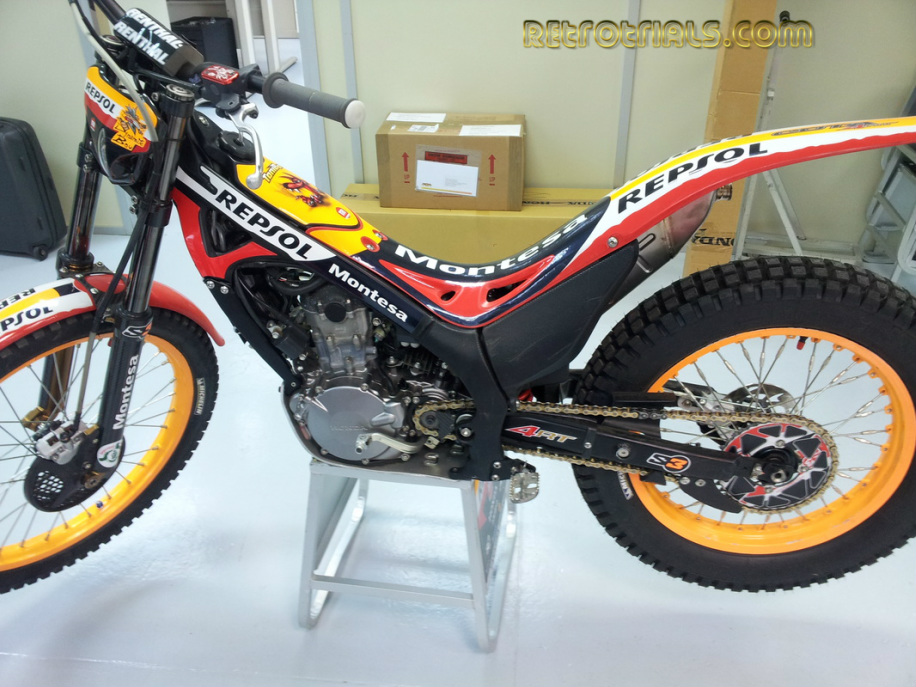