1987...... that was it, girls came along and that was the end of BMX for me. I was about 16 coming on 17 years old when I got my first car, two months before my 17th. I haven’t drunk alcohol for 17 years (apart from One Night in 2003) before that I just drunk occasionally when younger. I’m just not a drinker. Before this however, there was a time when I went to night clubs. At this time I had a Ford RS Turbo convertible. You either had an XR3i Convertible, or a RS Turbo Hard Top. There were two specially made RS Turbo Convertibles made, a black and white one, I had the Black one, I was just 17 and the Police were out for me. I was a cocky git at the time, streaked hair, and the sun tan (sunbed) and I went out with one of my best mates, Jason Grundy. We went out locally to Chatham and Jason was driving my car as I had had a drink. We went to a kebab house after clubbing,  I came out of the kebab house before my mate and moved my car as a McDonald’s lorry wanted to get past me to get behind Mcdonalds, early hours. I moved the car around and the Police were sitting there. I panicked and thought about running, I jumped out the passenger door and started to run, as I ran one of the Policemen went over to my open passenger door and smashed the window of the door.
I stopped running and shouted  “Thats my fu*£ing car” so I went over to the Police car and ripped their window wipers off. It all kicked off.  I was breathalyser and I was over the limit. This was the worst day of my life….but was it?  It worked out that this was the best day of my life because straight after this I got into bikes and trials came along and I wouldn't have believed what life I had in front of me out of this very bad nightmare.
I really wanted a motorbike. My family were against it, after I lost my licence. The car went. I was 18 coming on 19 and I bought a 1 year old 1987 Fantic 243 from Paul Smart Motorcycles in Maidstone. It was white with a red tank. I can still visualise all the trials bikes he had in there at one stage. Bultacos, Fantic's Italjets, Mecatecno’s, absolutely everything. The room was twice as big as this, smothered in all the bikes. At this time, I was fencing with my dad. I left school at 14. It was a rough school and I was boisterous. The headmaster said to my Dad if you have a job for your son let him do it. I was the youngest in my year, many of the other kids were 15…. sounds funny really, although it wasn't. I wasn't expelled but asked to leave haha. I know it’s not right, but it’s my life so why hide it, it's all about the ups and downs of life, working from a young age enabled me to get the car I had.
One of Jasons first trials bikes, the Beta TR34 with his young brother Ross 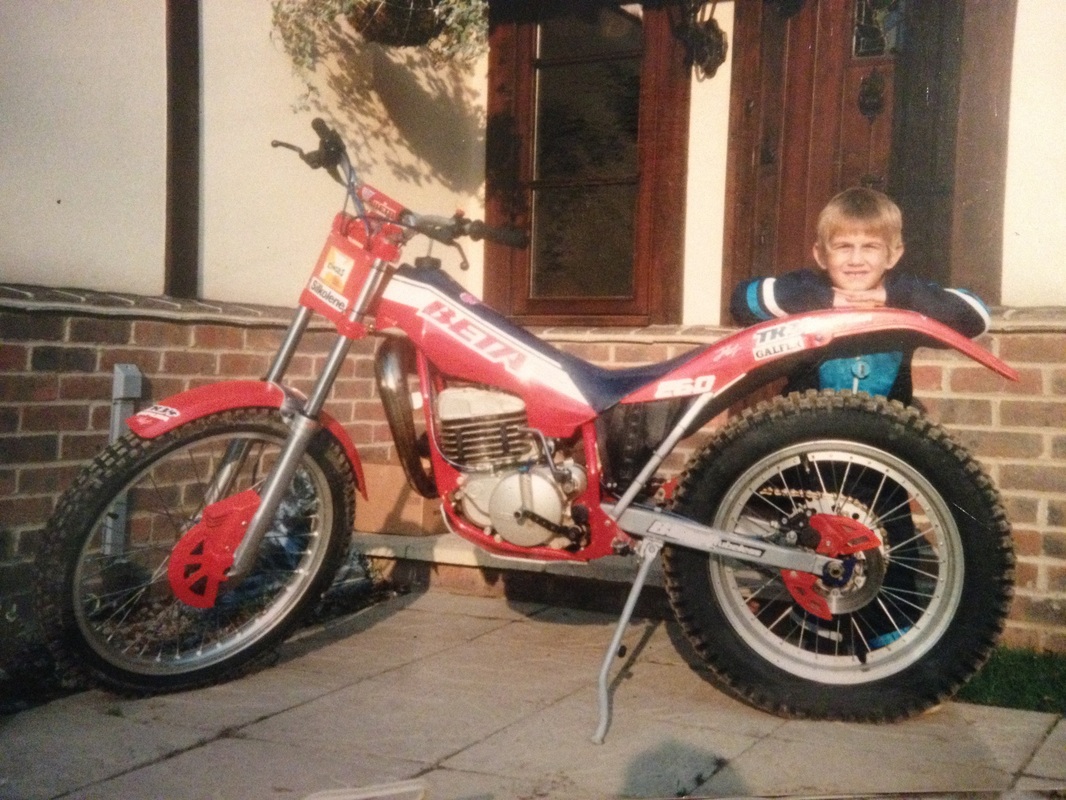 Jason Finn - Trials Freestyler - Exclusive Interview
I had only been riding two years at that time, Steve came to Guernsey or Jersey with me about 5 years later in 96'. He was booked for some Trials Schools and I was booked for shows out there. He rode with me in my show, I remember I bunny hopped a load of people at the end of a show, they were all laying on their fronts and Steve came out and rode straight over their arses, I cracked up. The people laying down were a bit shocked, Stevie didn't care, It was amazing to be riding alongside him. I was a huge fan 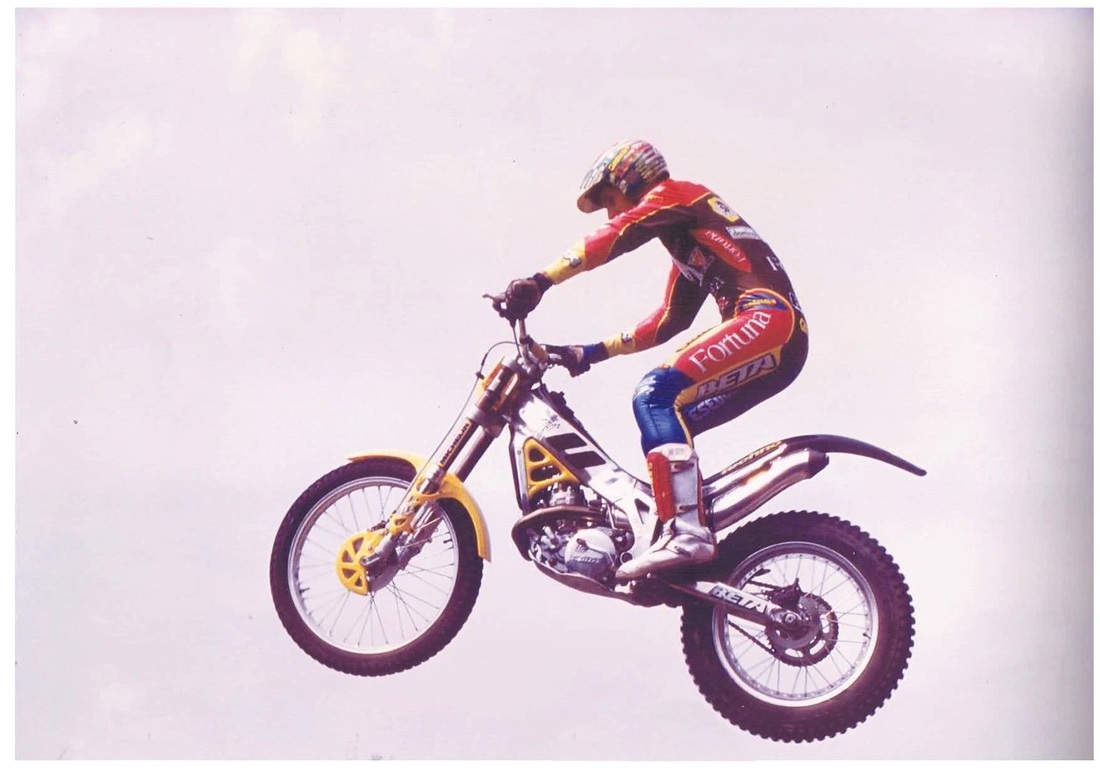 Jason Finn - Trials Freestyler - Exclusive Interview
At one Arena trial, I turned up for an event with my motorcycle on top of a load of old fencing on the back of a Nissan Cab star pick- up, tied down. When the report appeared in the paper, it was written that Jason Finn turned up with his bike laid on it's side, on the back of a transit full of rubbish. 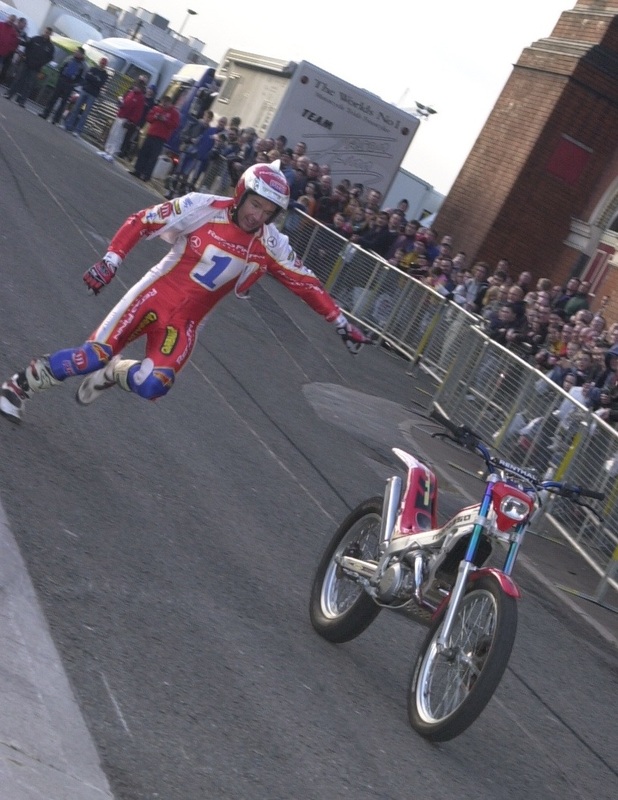 Jason Finn - Trials Freestyler - Exclusive Interview
Well, that wasn't quite true…. we all start somewhere, within 7 years I went from that to a Mercedes sponsored motor home worth over £120,000, 3 montesa’s at one time, Benelli sponsored paddock scooter and it was just crazy. I remember walking back to the Motorhome at an event and looking at it feeling really proud. The Sponsored GH awning was made in silver the same as the Motorhome and had Black Piping to match all the black sponsors and Big Team Jason Finn Signature (my Jordi Tarres Copy) there were chains across the front, with little signs saying do not enter. 3 Monts lined up, identical sponsored stickers placed in exactly the same place on each Mont, paddock scooter, a big silver table, and 8 Mercedes chairs around it, it looked awesome. Presentation was paramount for me. I have only ever worn Garibaldi and Alpinestars throughout my career because they are simply the best. I remember thinking, this isn’t right, going from rubbish on the van to this. I said to myself, you’ve got no one to thank Jas, no one to thank apart from yourself. You’ve done that on your own. It was the passion that got me this, riding a bike was my calling, it was just right and clicked with me.