Someone beat them of course . Im gutted for you Bernie.....but you had a glory in your hands for a short while , whilst everyone else just turned the page  , metaphically speaking ..of course
Here are the spec sheets

In 1998, Michelin, the tire manufacturer who has designed the high speed tires for the Kamikaze rocket-propelled bicycle, asked to the team if it would be possible to attempt to regain the mountain bike speed record. Arnold Neracher of Exotic Thermo Engineering has then replaced the 1200 newtons of thrust monopropellant rocket engine by a bipropellant propulsion unit capable of producing up to 1800 N of thrust. On October 3rd, 1998, at Payerne in Switzerland, Alec Beney has reached an amazing speed of 236.67 km/h with this modified Kamikaze rocket bicycle.

In 2002, the Kamikaze rocket bike was modified again. Arnold Neracher has replaced the afterburning rocket thruster by a cluster of two monopropellant thrusters. A larger fuel tank with 12 liters of capacity was installed in replacement of the 6 liters tank. On October 19th, 2002, at Raron in Switzerland, Donald Pottier has raised the speed record with 242.61 km/h! For this speed record run, the thrust was regulated at only 70 percent of the nominal potential, and the fuel tank was filled with 9 liters, only 75 percent of its capacity… 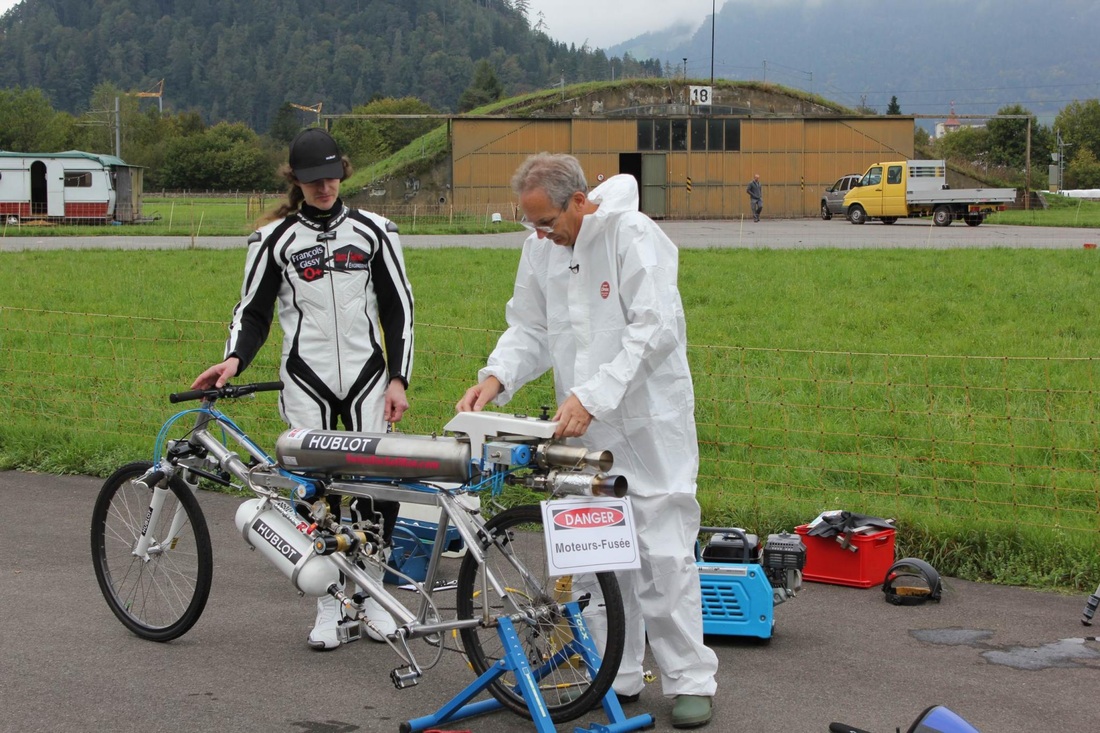 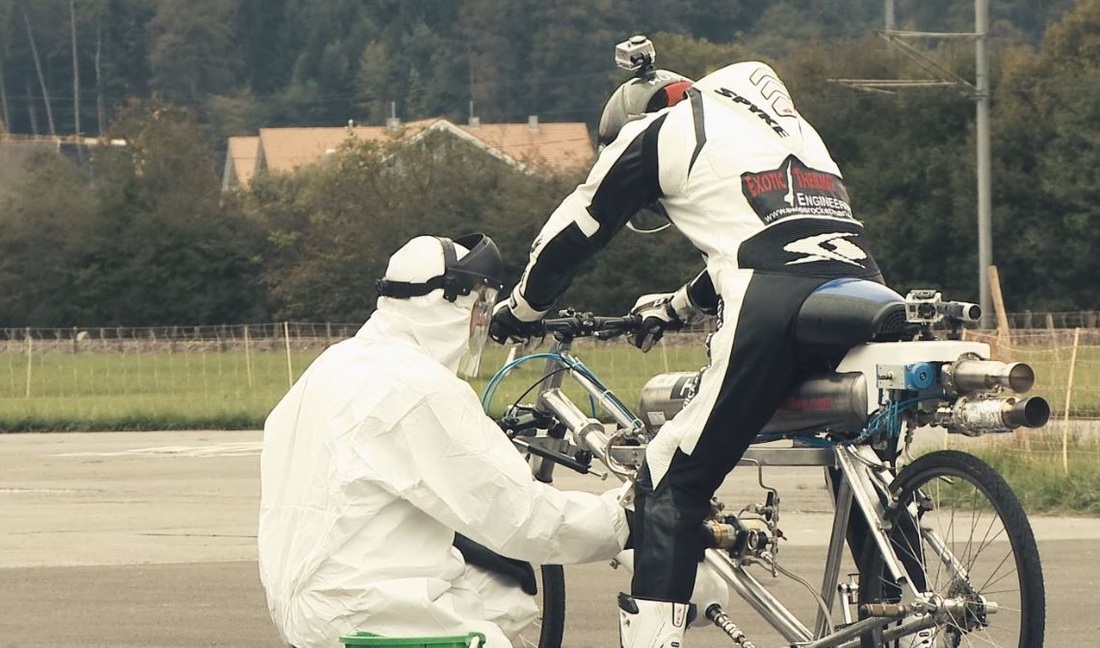 Bernie schreiber - the Rocket Bike man
In 2002 the World record had reached 242 KMH. 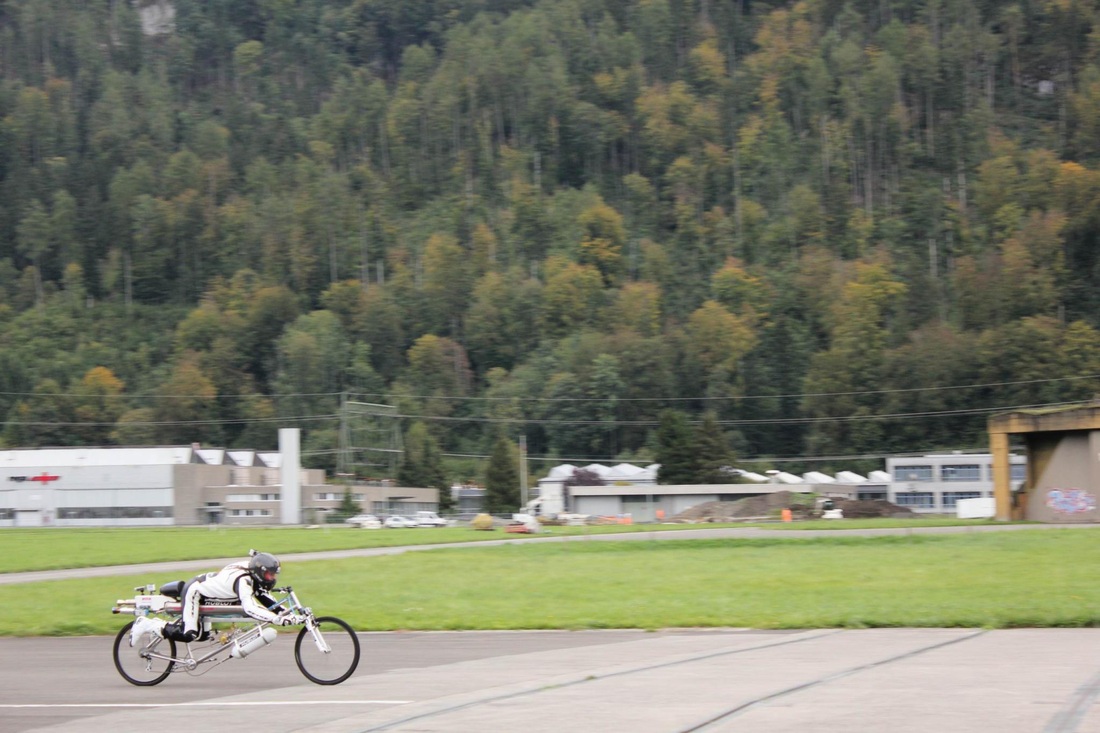 Francois says "Anyone can buy a Busa and ride 300 km/h on a highway. My grandma could do that".

"I prefer having an accident when riding this fantastic machine than be killed in a road crash and having engraved on my tombstone “Killed by a drunk driver”.

They didn't have the Guiness book of records present because the fees involved were to much. there preferred the spend their money developing the bike.

At 285mph the force of the wind is 50% higher than the weight of the rider and the bike combined.

Francois said that to go any faster everything on the bike would have to change as there was no much strain. The track is also becoming unsuitable and we need somewhere more smooth. 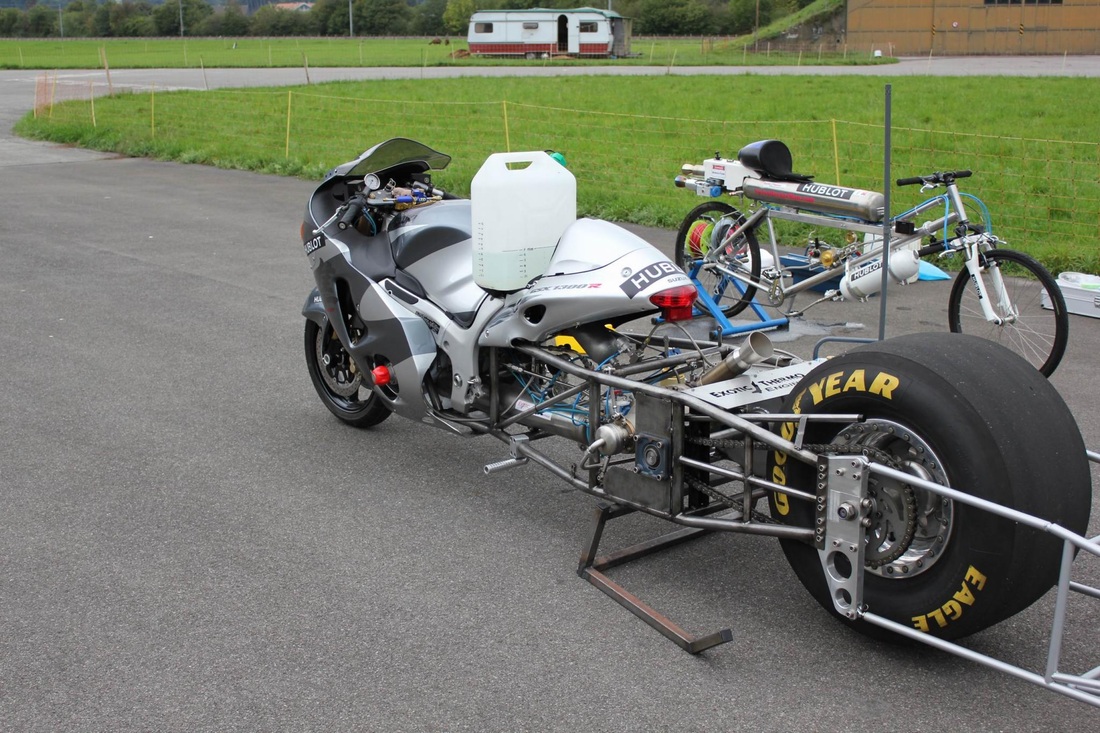 Bernie schreiber - the Rocket Bike man
Ten years after, Arnold Neracher has built a new rocket-propelled bicycle, more powerful and with a more aerodynamic riding position, though much less natural for the rider, and more difficult to control. A few test runs were made in 2012 by François Gissy, unfortunately one of the trials ended with a crash…
On May 19th, 2013, on a disused airfield located at Munchhouse in France, François Gissy has reached a speed of 263 km/h!

With the support of Hublot, a few months later the team tried to go even faster with the rocket bicycle. On October 7th, 2013, at Interlaken in Switzerland, François Gissy has managed to accelerate up to the crazy speed of 285 km/h, and then return to a stop, on a total distance of only 790 meters, using the last meter of the runway to stop the bicycle!

This incredible adventure of Kamikaze pioneered 20 years ago by Bernie Schreiber is not over yet and on good way toward even higher speeds. To be continued.
Francois onboard his Rocket powered Hayabusa - now thats getting silly !! :) 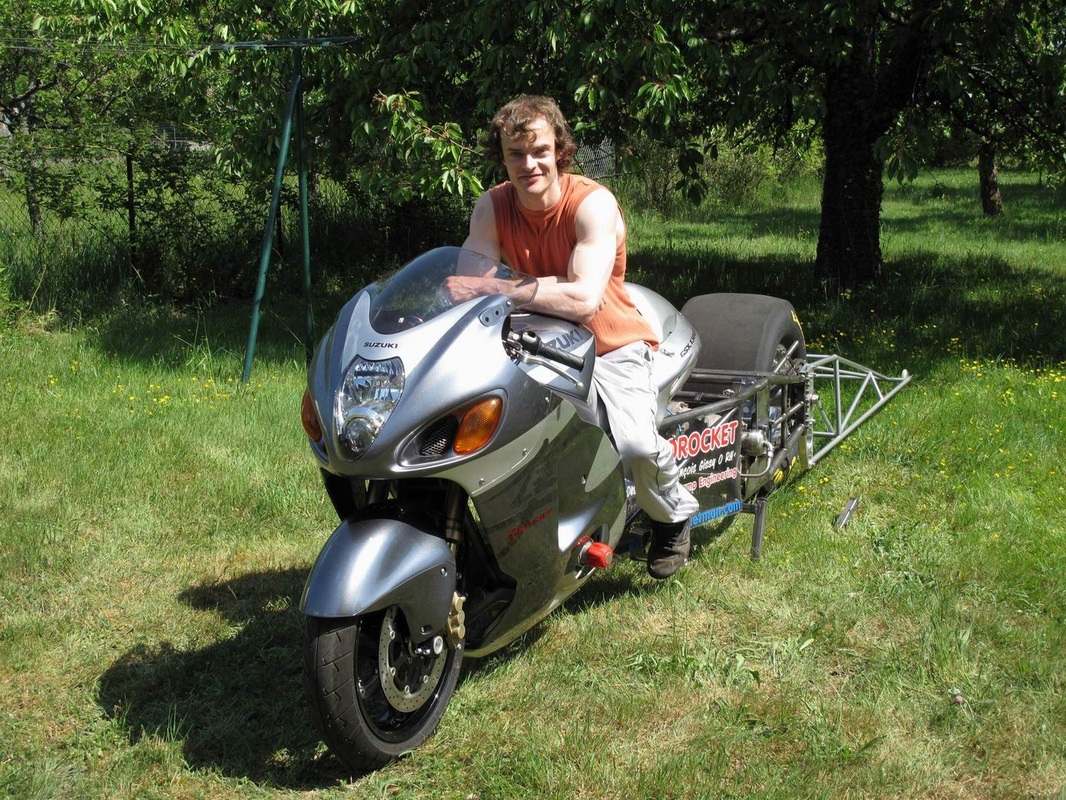 Bernie schreiber - the Rocket Bike man
Francois Gissy's Fantic Koala ( this model is new to me to :)) and his trusty Yamaha TY.
Some additional information can be found at this page:    www.facebook.com/swissrocketman

Here is a TV coverage from 1995 about this event. We can also see Bernie Schreiber in this video.
Thank you to Francois Gissy for his help with this  report