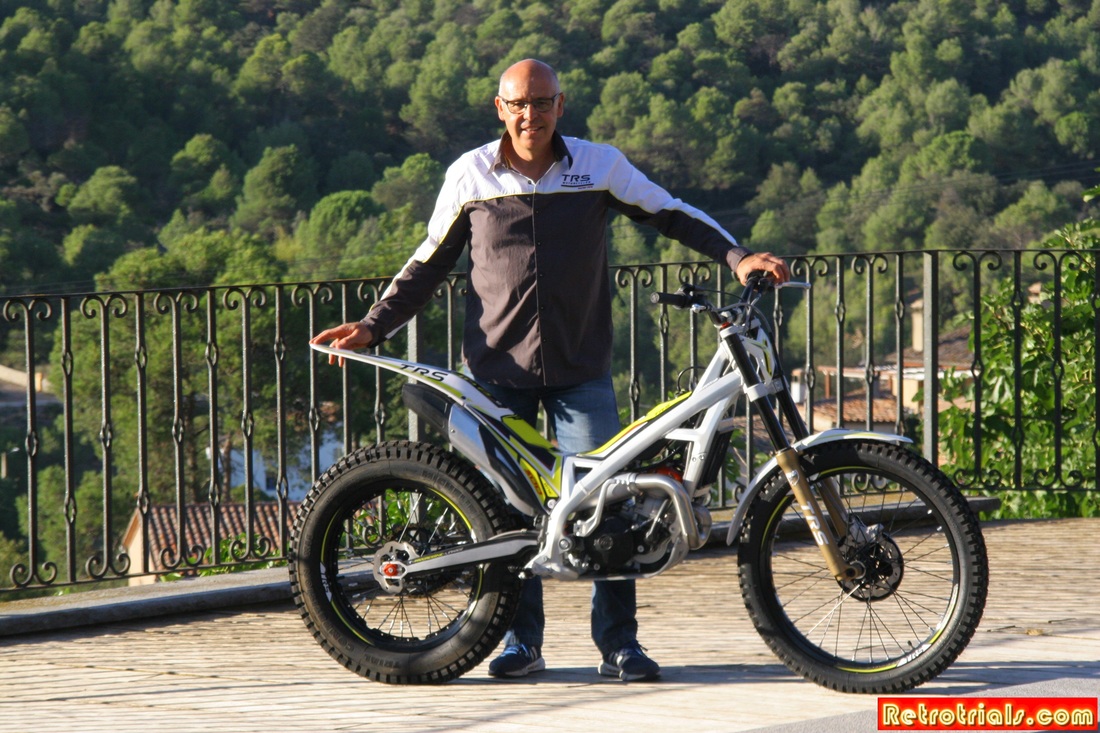 RIGHT !!! This was the moment when I wanted to talk and tell this guy my views, rightly or wrongly. I have an enquiring mind. To my mind there is testing and testing. Testing half a mile away in the hills on a short course of sections is one thing. BUT .... bikes these days need to be capable of more. In the UK our national events have courses over 25 miles or so of hard moorland tracks. The SSDT riders navigate 100 + miles of road and tracks each day. The bikes are given little mercy and throttles are held 3/4 open for long periods. It's very very very easy for a bike to over heat, or for a gear box to break. I explained that it was very important that the new TRS was tested almost enduro style for hundreds of miles and given hell. The OSSA gearbox was a balls up, the GG box has had 1000 's of failures, the Jgas has had some issues. .... and these in my opinion resulted from a lack of testing on the going.

The designer wants perfection. The owner wants a return. There is a balance and that's very important that there are no issues in 1 years time with new owners.

I have since been told that TRS will shortly be sending one prototype over to the Uk for testing by Steve Saunders and his riders. Some other importers will also get a bike to test. They will be completing the sort of thrashing across the moors that i was explaining. 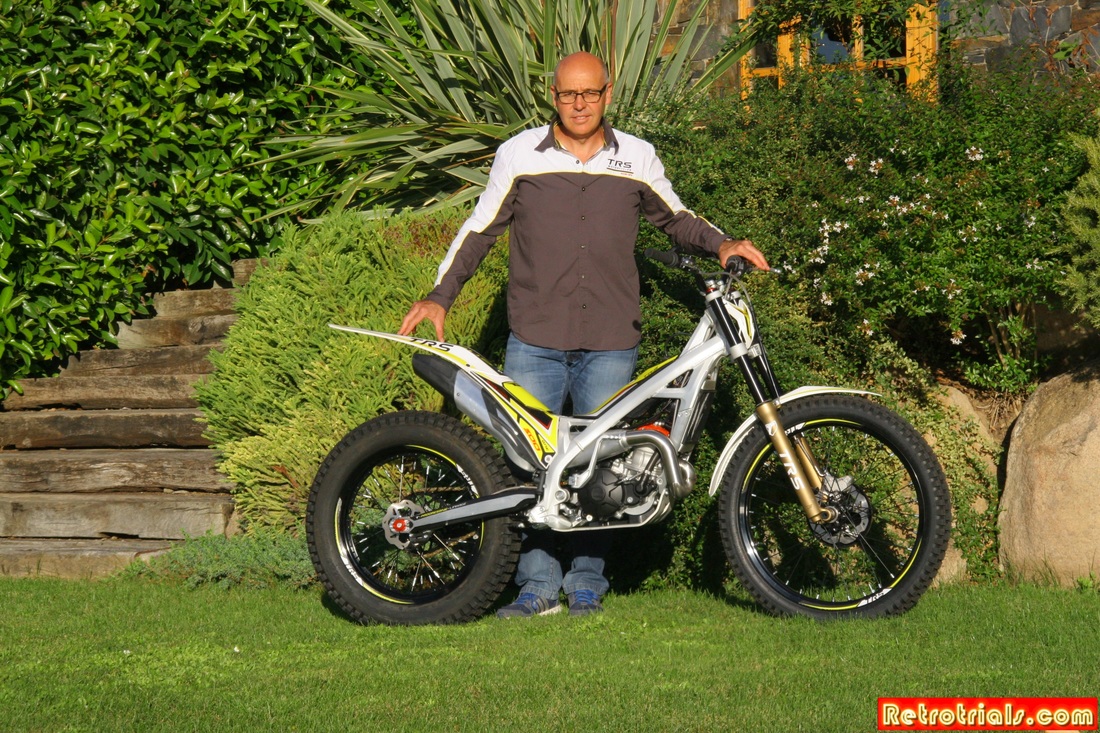 Sooooo ....I think he understood me. ... and he said the TRS would be tested to an incredible level.
At this point Fransesc arrived back from the morning party sitting alongside Pol. After some joviality we jumped in the back and sped off....with no thought of the Mecatecno down at Jordis. 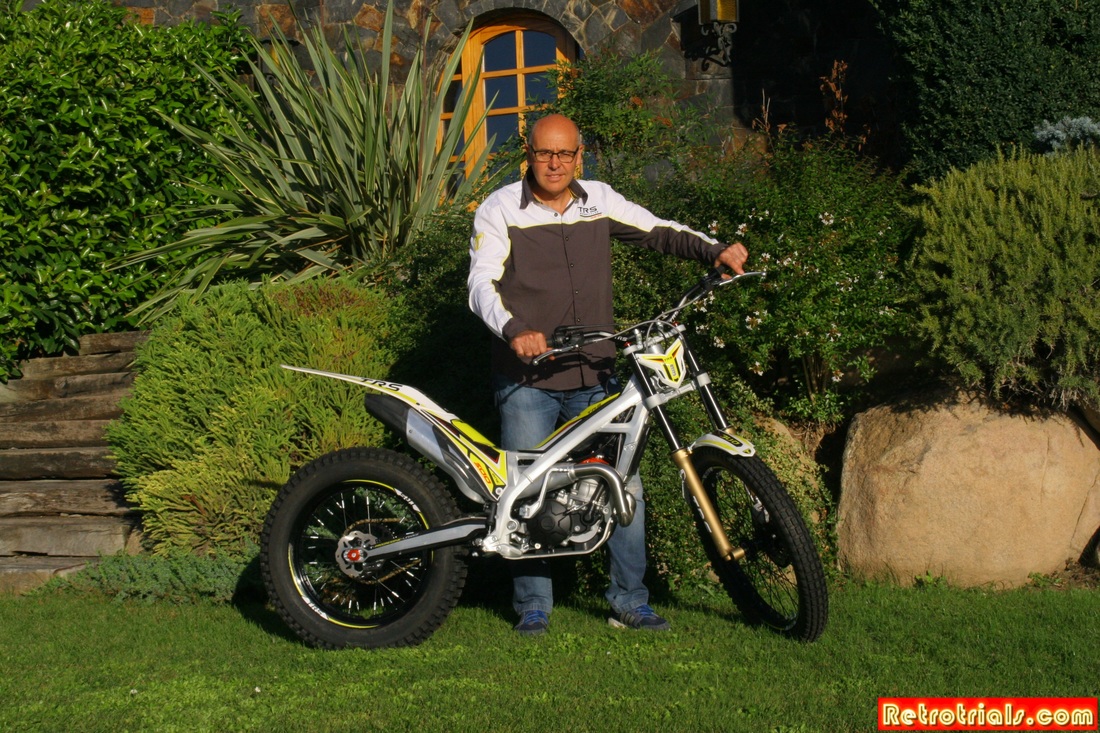 A chicken and pasta lunch prepared by Angel was enjoyed and then we got the news that Jordi had returned from meetings in Barcelona so we slowly trundled down the hill. Fransesc was desperate for a siesta but I wouldn't let him. 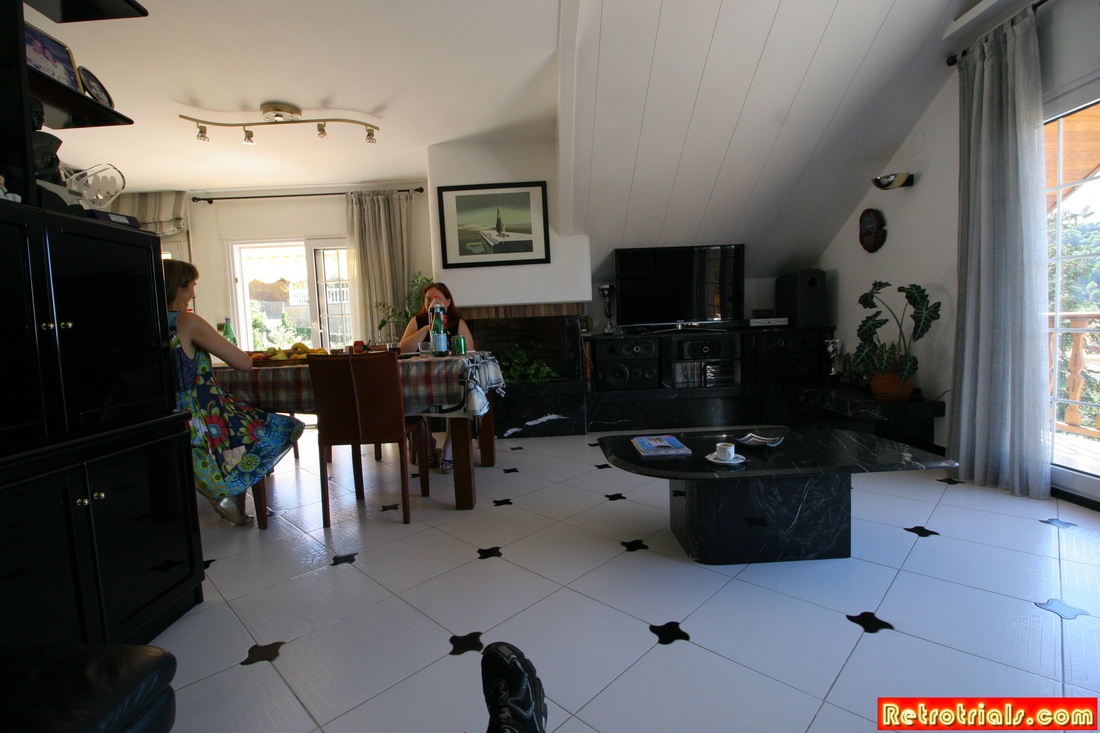 Jordi appeared and welcomed us.  We then looked over the garage bikes, whilst Francesc looked for somewhere to sleep, eventually curling up on the cream leather sofa in Jordis museum , surrounded by Jordi's trophies. 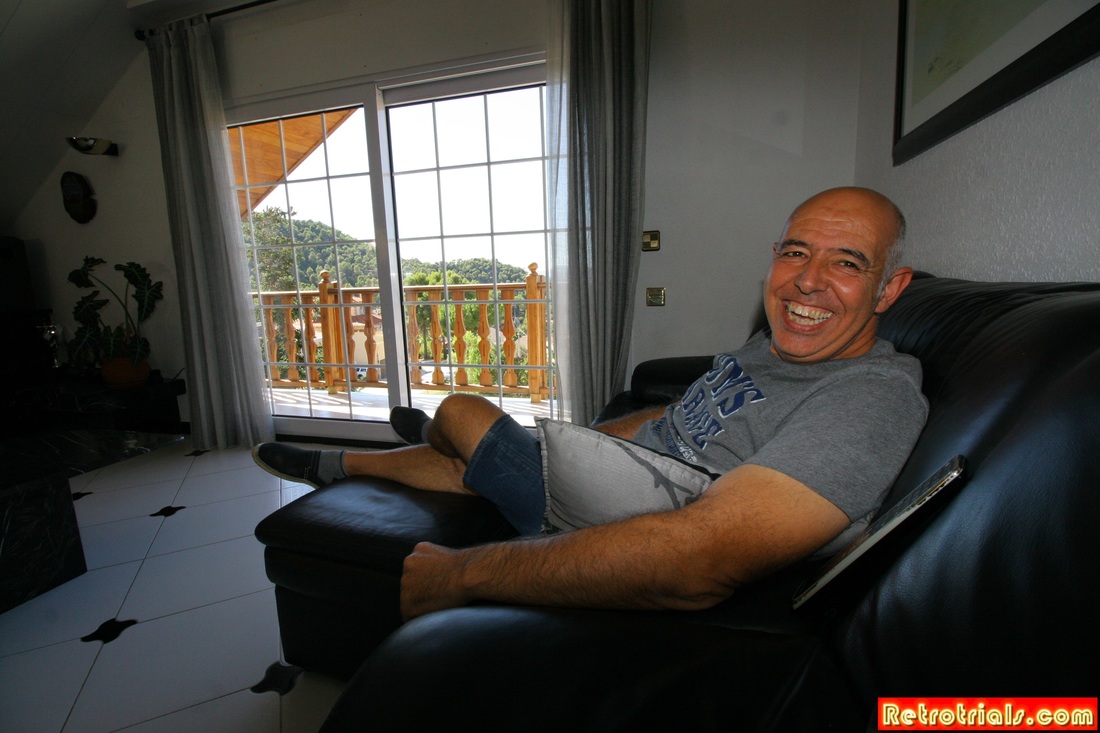 At the end of the once Dani the mechanic had worked his hours and left , Jordi asked me if I wanted some photos and I said yes please so he disappeared inside to get changed. He appeared 10 minutes stroking his head and  joking that he had had to have a shave  .

And so some photos by the pool. I did Pool boy duties picking out a couple of leaves and moving the pump and nets.

Then out with the 1995 GasGas ( photos another day ) but Jordi was now TRS so did not want his photo taken with his last World Championship winning bike. Now you might be starting to understand the mind set.

What I saw in the TRS workshop that afternoon was a bike 99.9% ready that looks absolutely gorgeous.  A bike that isn't over complicated and which can be stripped down quickly. 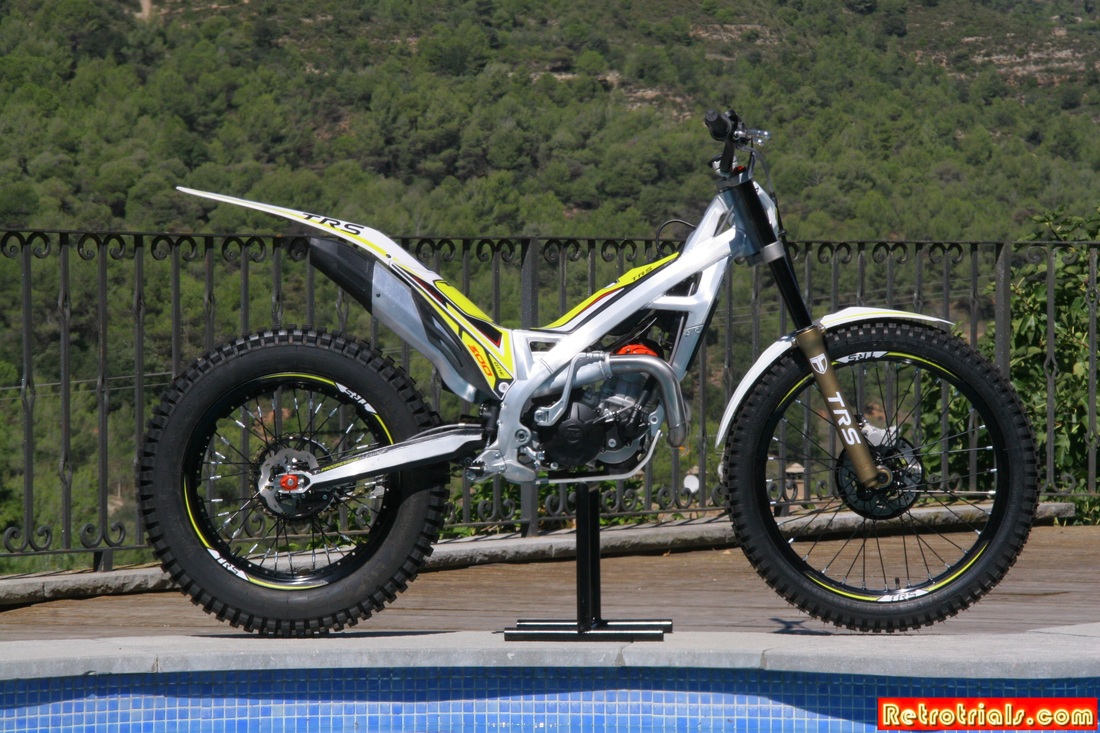 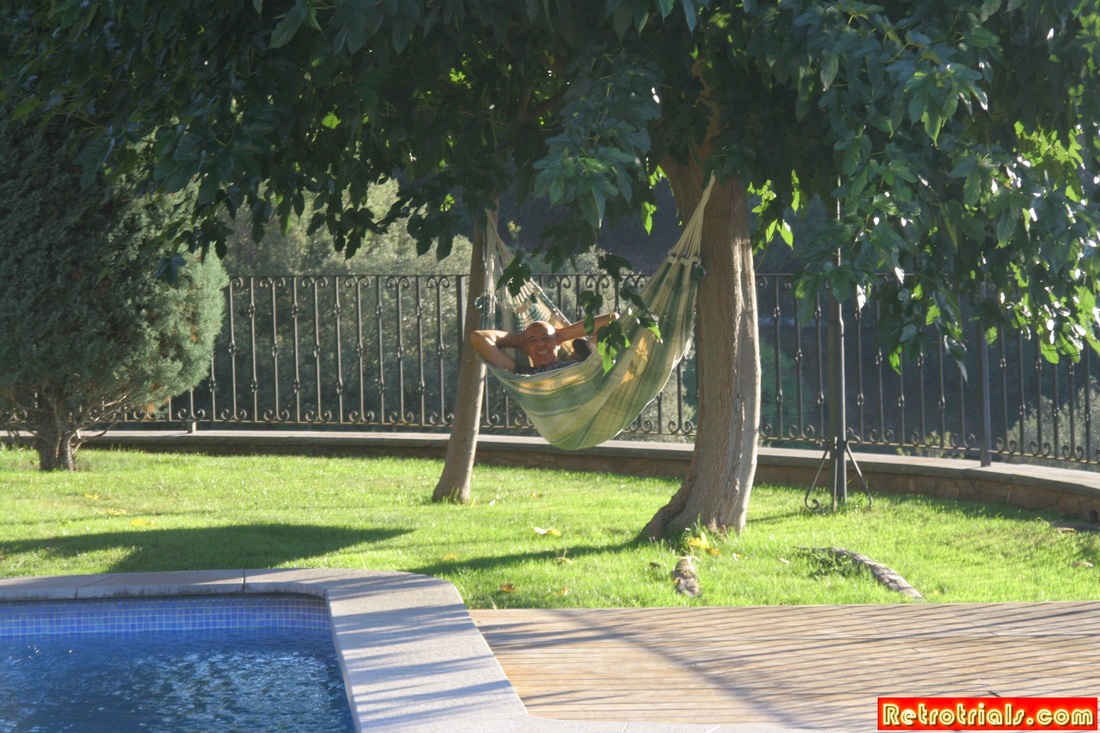 More striking than this. ... What I saw in the Workshop was a TRS team that was working exceptionally hard to ensure that this bike is unbeatable in every way.  Unlike before with JTG, where there were strong contrasting influences, Jordi has complete control over this project, there is no rush and he is making dalm sure everything is right. Jordi has been and is working flat out right now making sure the TRS is going to be perfect. Do not underestimate him and the teams efforts right now.

I've seen this myself. ... and it's never been so clear as this visit to Rellinars.

While my friend Francesc catches up on snooze time.