After about 3 miles on the road we arrived at the last group of sections. This was the first of that group.

The photos do not show AT ALL the steepness and severity of this section. Robyn Stuart enters the section on her Gasgas 125. 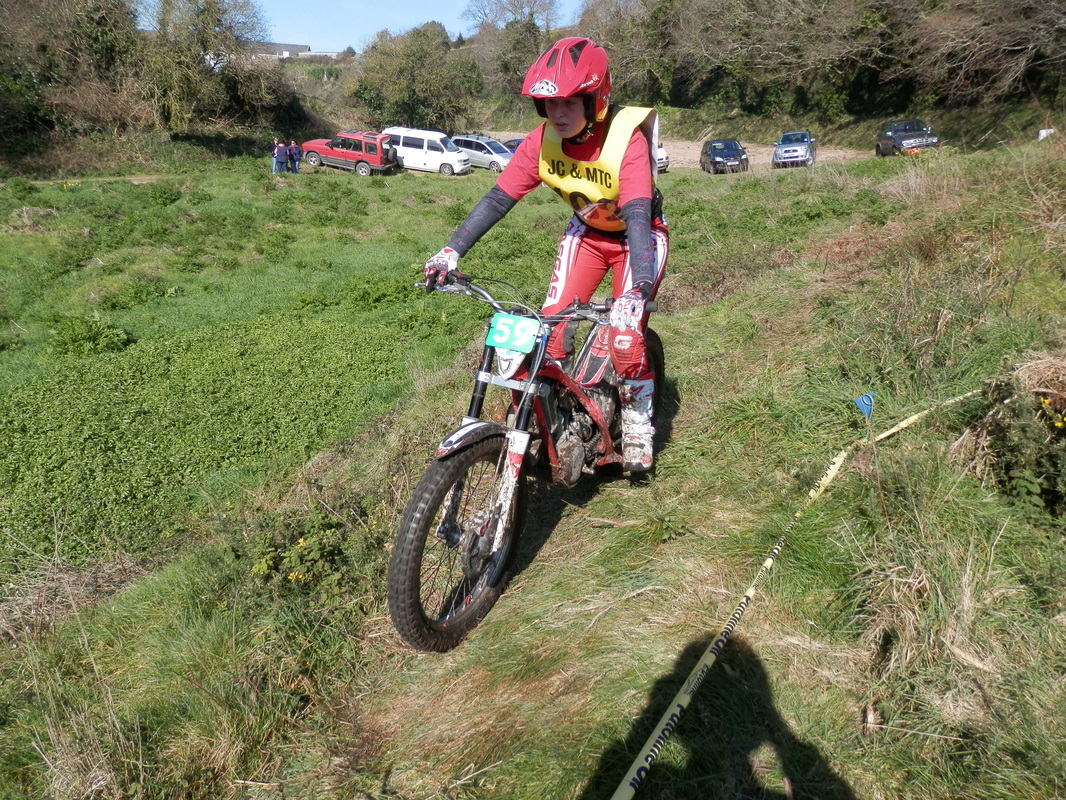 Jersey 2 day trial - 8th and 9th March www.retrotrials.com
Craig selects third gear and enters the section. Once you reached the bottom of the section on the grass, you then had to ride up the steep bank , up one rock and then launch yourself at a huge rock step( you cannot see the step in the photo) .

Here Patrick Wardle takes on the step. He is a dalm good rider and has standard gearing on his Montesa meaning that he did EVERY section in first gear. 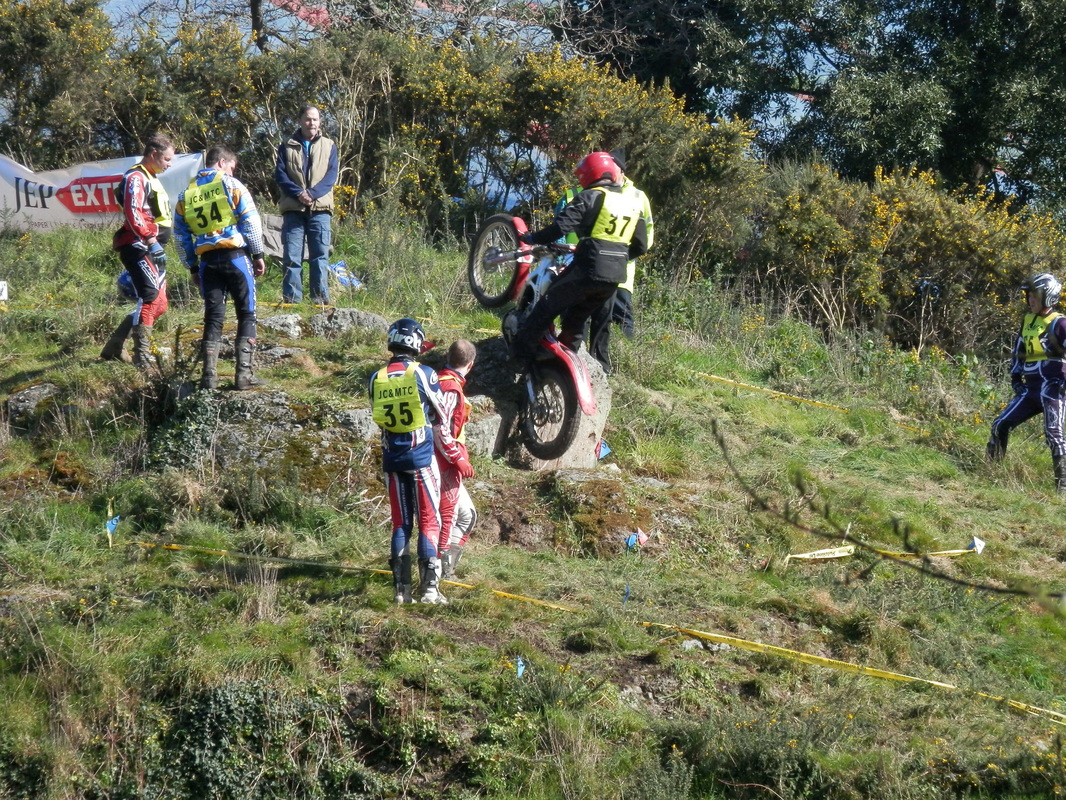 Jersey 2 day trial - 8th and 9th March www.retrotrials.com
It was not for the faint hearted. Now it was time for Craig. He was almost the first rider through. Lucky for Craig he wheel spun on the grass and avoided having to go up the step . Later in the day he would clean this section a two or three times though .
Some of the younger riders were transported around between the groups by vans driven by the organisers. Here you can see James Saunders on the 125cc Jotagas.
The inset photo is of James wheeleing the Jotagas 125cc. Pretty impressive James. Photo by Emily Cop. Thanks :) 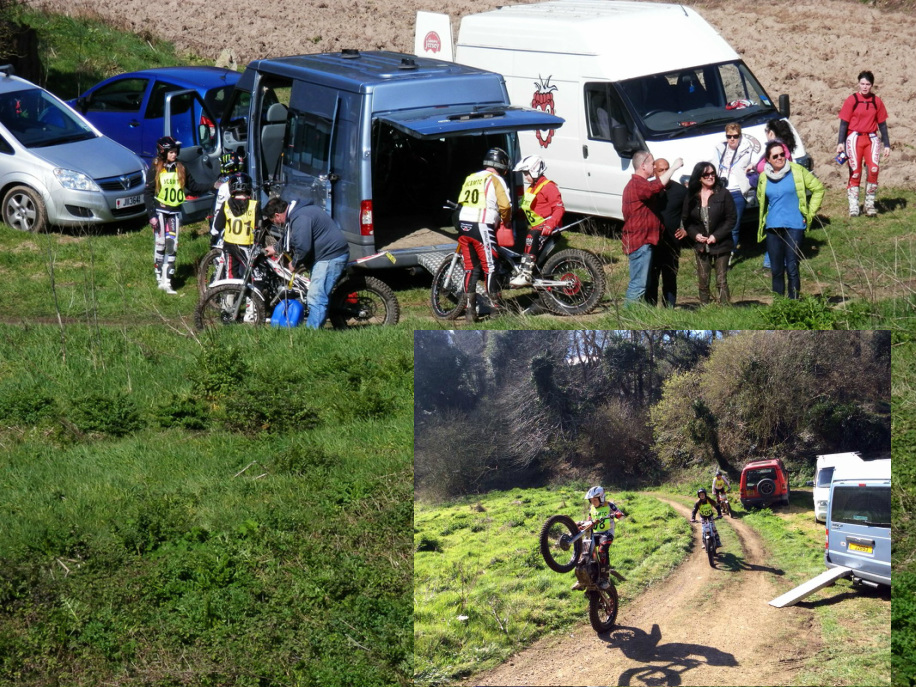 Jersey 2 day trial - 8th and 9th March www.retrotrials.com
After the five for Craig we decided to slow down and watch the same section from a distance. It wasnt a race and sometimes you need to slow down. Soooo thats what we did.

Jersey 2 day trial - 8th and 9th March www.retrotrials.com
After 10 minutes or so , we set off to the last group in the woods surrounding large lake. It was a beautiful setting with small waterfalls and streams to ride in.
This was a tricky section. The photo's misleading. We werent going up , oh no. Just along the bottom, thats more like it :) 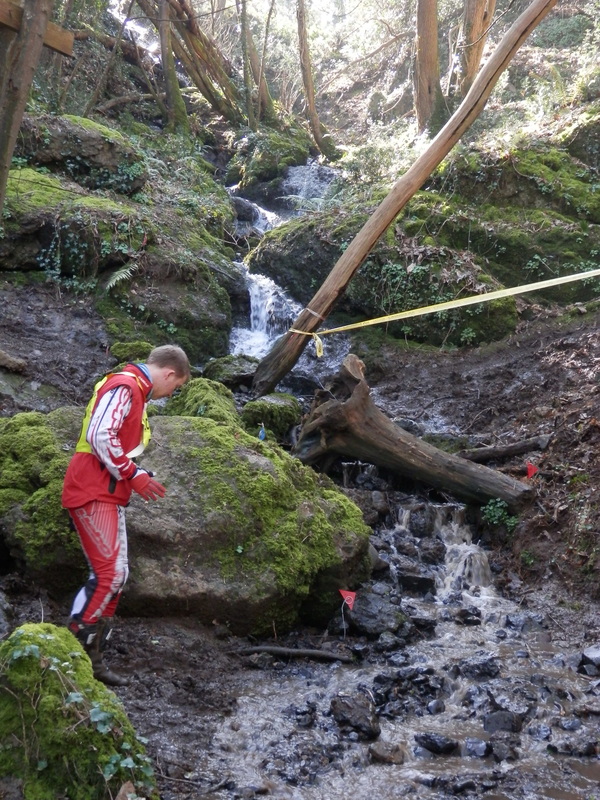 Jersey 2 day trial - 8th and 9th March www.retrotrials.com
I enjoyed this section a lot. It wasnt tight , it was just tricky and I would clean it one lap than dab it the next . Sooo annoying :)
Your getting to know Craig quite well now arnt you. Good !!. Dont forget his face ha ha . Ask him "Did Becky Cook beat you ?".
Also ask him "Did you check your coolant Craig ?" ha ha .

why do  you keep telling craig to check the coolant ??

Sooo it was the last lap of 4 x 15 sections and we head back on the road. Craig had been complaining that his bike was rattling and running weak. We had no choice but to carry on the road back to the start to finish. 50 feet from the start , Craigs Beta seized solid . He quickly pulled in the clutch and free wheeled back to the van. Ooops. It was properly seized solid . We left it to cool down , but it was still solid. Naturally dejected and unhappy Craig loaded the bike up . That was the end of his trial - Gutted .


We all know Beta's don't normally seize. We think Craig's water pump had been leaking for some time.
Then after a terrific day trialing but a very disappointing end we headed back tired , aching back to the Hotel Shakespeare for some refreshment and to get ready for the evenings dinner.
Dont you think that the waiter on the left looks like the shop assistant in "Mr Ben" ?
Well , about now the photos stopped. Craig ,being a whipper snapper had a few to many sherberts and found himself slipping under the table to count the chair legs.

It was a great night. I wont tell you what trophy Steve Saunders  was given  ;)
If I did tell you , my full factory sponsorship for next year might be cancelled ha ha .