Paco Roldan is in front of you. He's the funny guy and the workshop boss. Make no mistake , he is in charge of the factory , but he does have fun whilst he's doing it . He is one of the engine's designers and is constantly refining it , continually. Paco showed me a number of small changes that are being made already to the bike and several that they have planned for next year. He has worked with JTG from the start and worked with GasGas before in R and D before this . It genuinely surprised me ,how much work the company is putting into developing this bike further.
Paco , Albert and Daniel 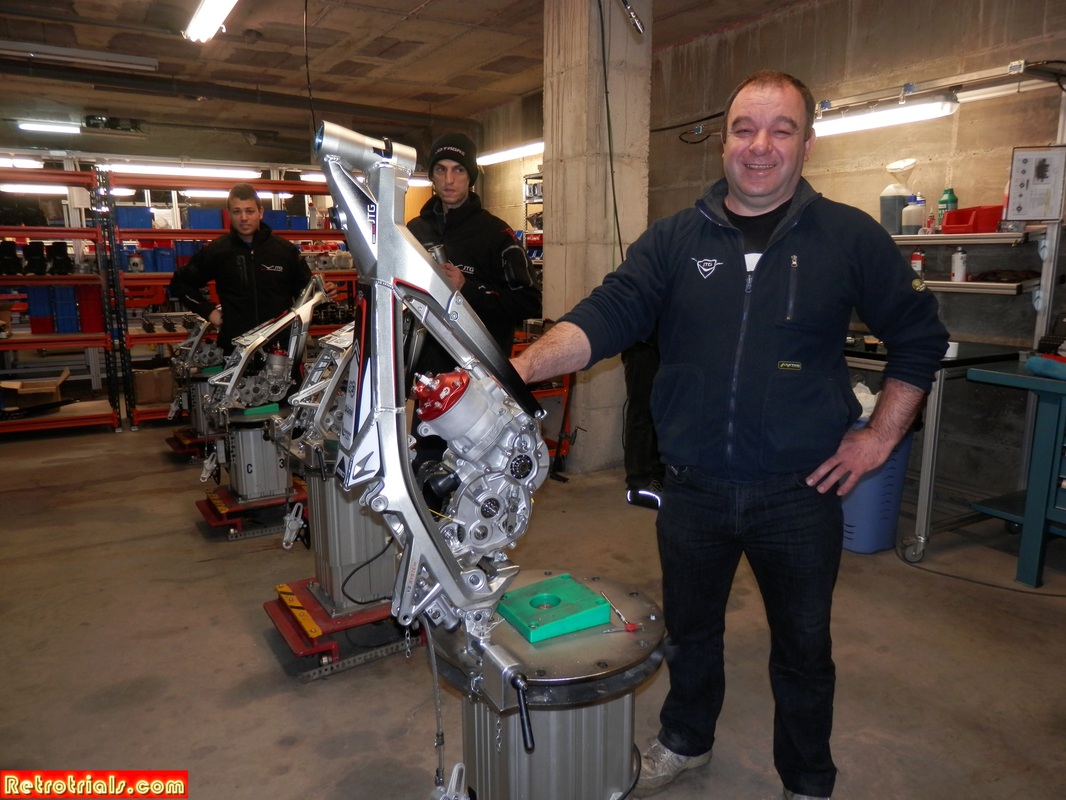 2014 jotagas factory tour WWW.RETROTRIALS.COM
Jotagas is a small company. I know it is a cliche to say that they are nimble.......but its true.

For example  - - I thought that the mould and castings were make so it was to expensive to change them . NO , i was wrong. Jotagas buy parts in at 50 at a time , apart from the swinging arms and chassis which come in smaller numbers. Small numbers mean that they can change design with suppliers easily and not be stocked with piles of parts that are expensive and also that  they might want to improve , but cant. The boss Piber has known all of the suppliers for many many years.  He just changes the design himself and bingo , its done. Whereas it might be a complicated and long drawn out process with a larger company , with Jotagas its not.

The distinctive and beautiful anodized Alloy chassis of a Jotagas awaiting their turn to become a trial motorcycle. 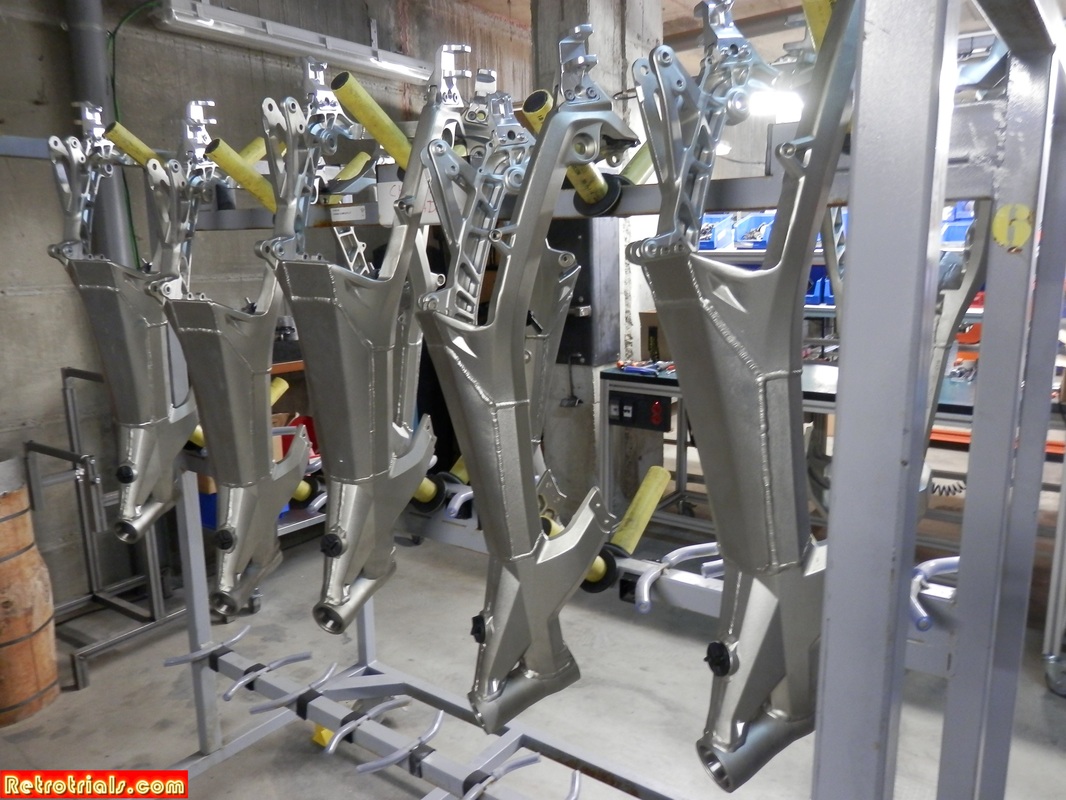 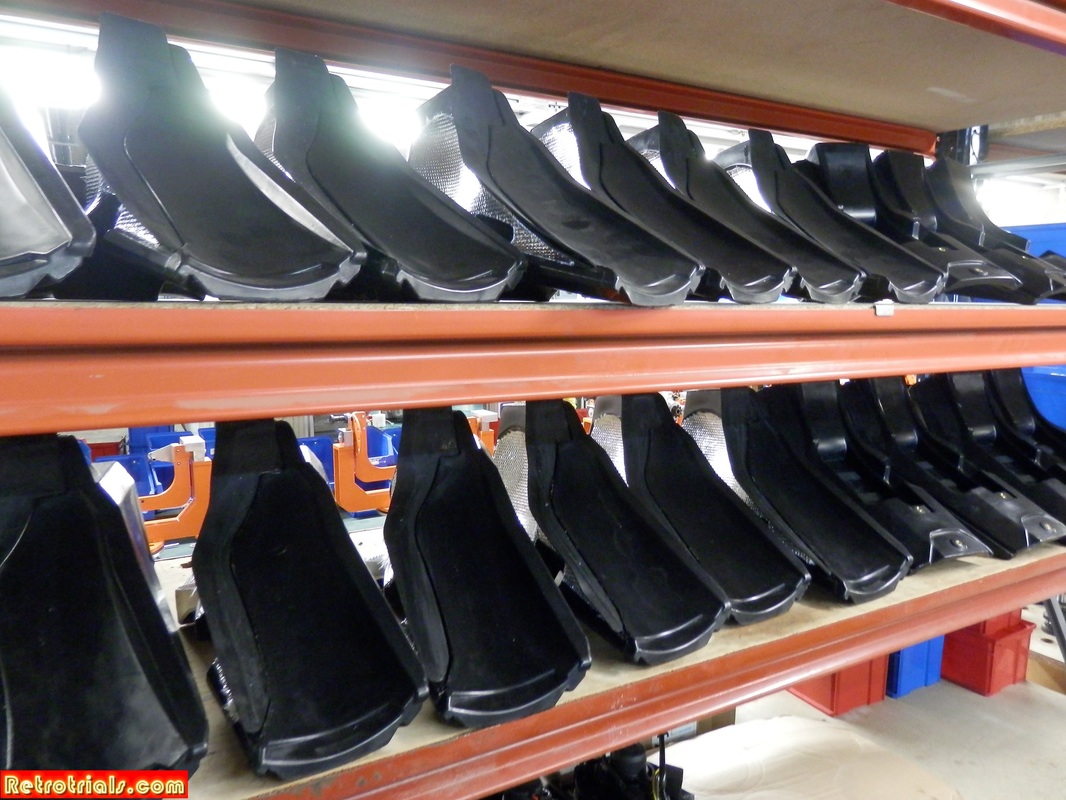 2014 jotagas factory tour WWW.RETROTRIALS.COM
I was at the factory for a whole day . I watched the whole assembly. I was very reassured to see lots of sticky grease being used on the bearings and bushes.When ive pulled my Jotagas' apart at home ive never found a dry bearing. Many people do strip new bikes down as soon as they get them. I  feel that with Jotagas you wont need to regrease them when you get your new bike. The o rings especially on the rear linkage do a great job of keeping the dirt out and grease in , even when you use a jet washer , like i do. 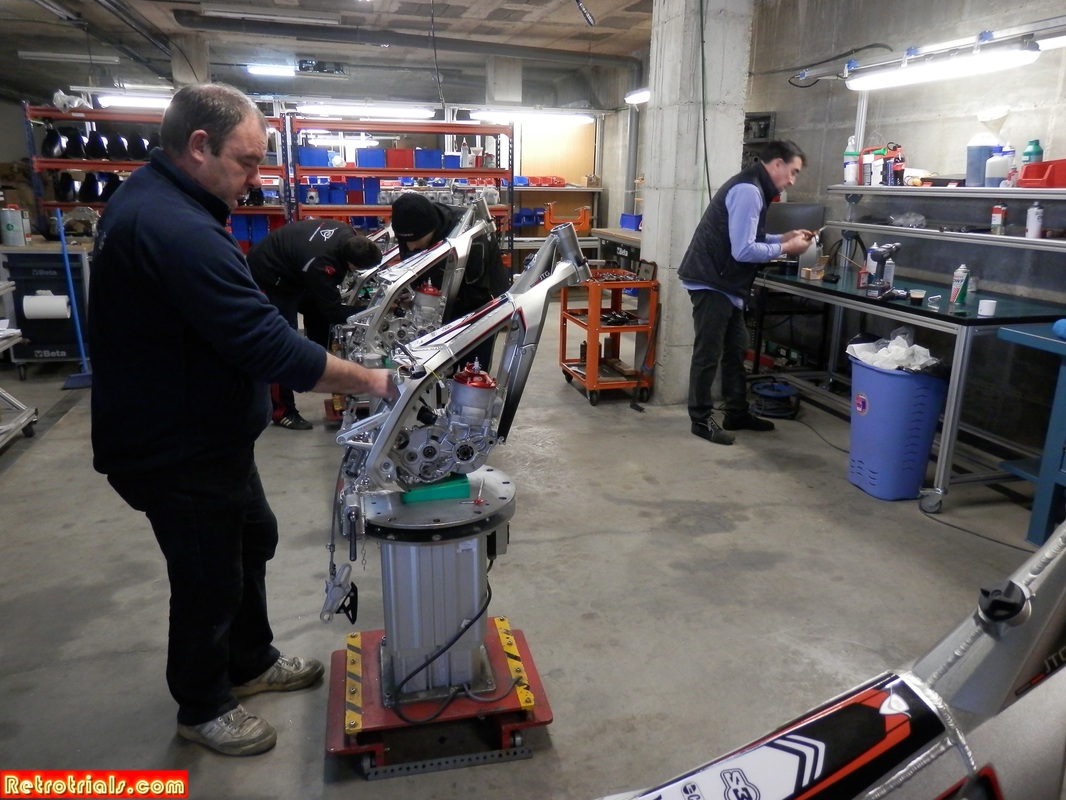 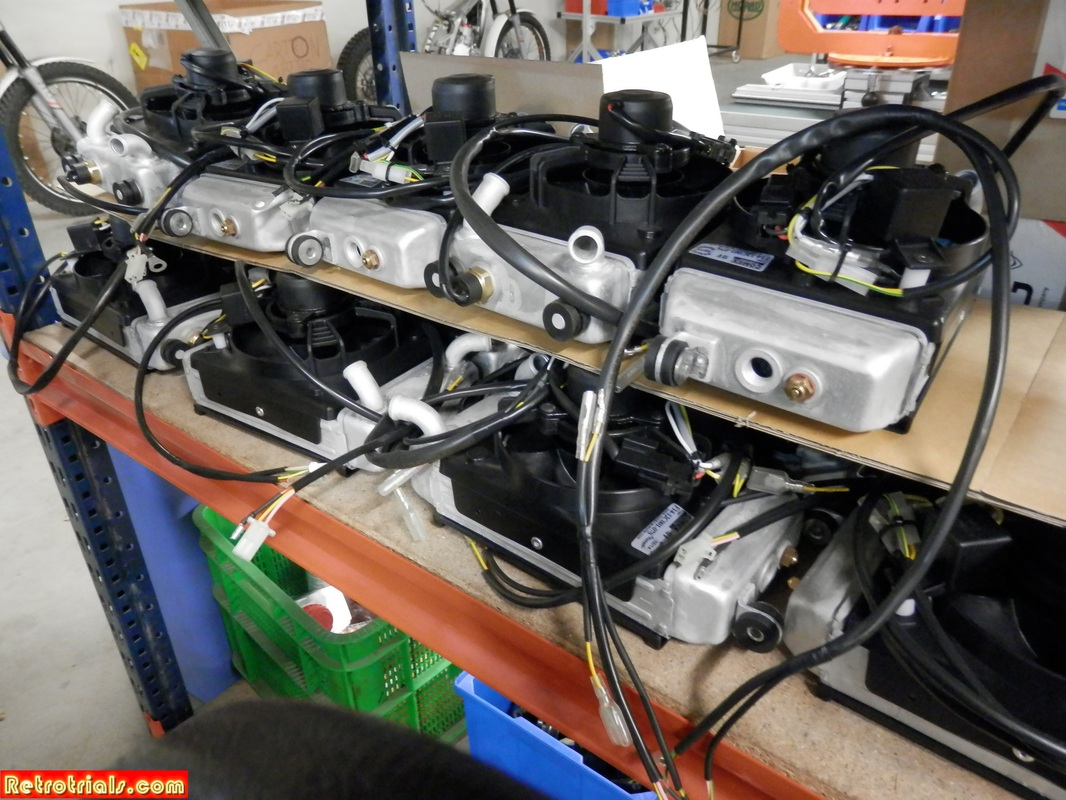 2014 jotagas factory tour WWW.RETROTRIALS.COM
Kick starts and gear levers . Both specific and individually engineered for Jotagas , not generic items.
Because of the shinking size of trial motorcycles, every motorcycle has to be assembled in the correct order. If you dont , then you have to strip it back down again give yourself a good taking to again. 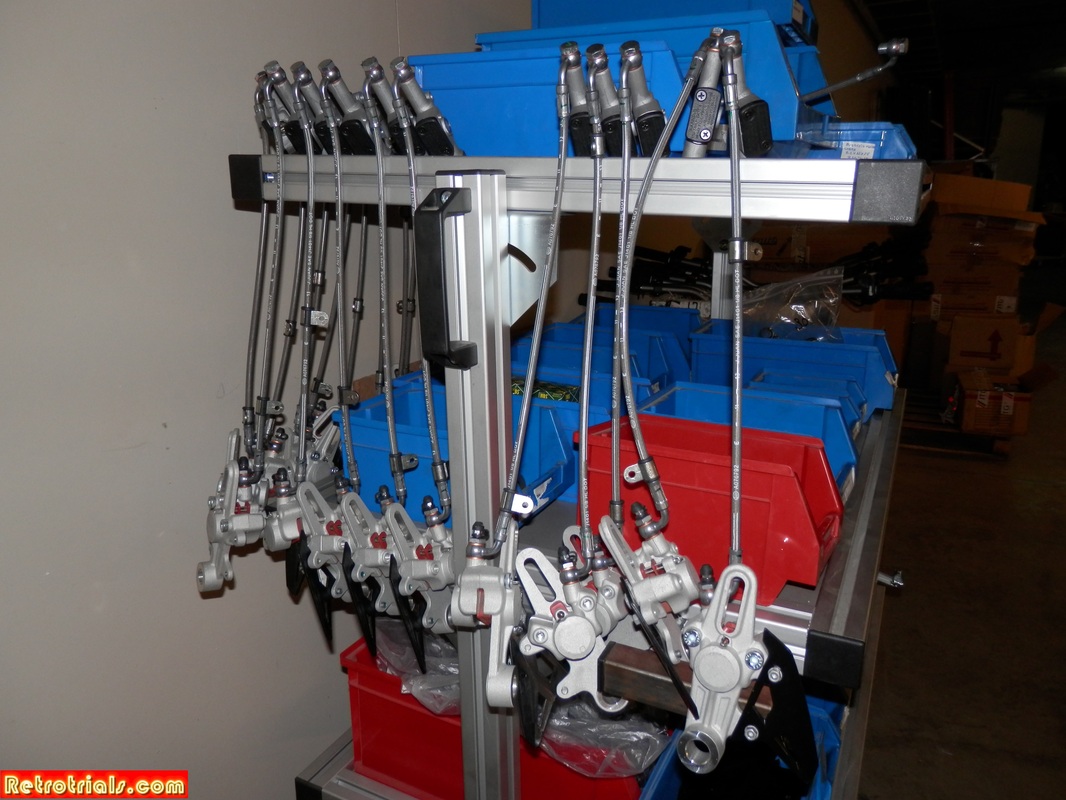 2014 jotagas factory tour WWW.RETROTRIALS.COM
Piber controls every element of the manufacturing and supply process and is very keen on improving the bike . For example - The Retrotrials.com Jotagas diary has been commenting on the fact that with a low rear tyre pressure , the tyre can rub on the chain tensioner. This was also fed back to the importer Steve Saunders. This in turn was fed back to the factory and bingo , its been changed . The swinging arms are now being engineered and milled in a slightly different way to increase the clearance.  I was really chuffed to hear this. There are more improvements coming up , that i'll tell you about.
Swinging arms , ready for engineering.

The foundary for the chassis and swinging arm is even made locally. Pibernat collected 20 swinging arms from the anodisers whilst i was there.They have lots and lots of parts. 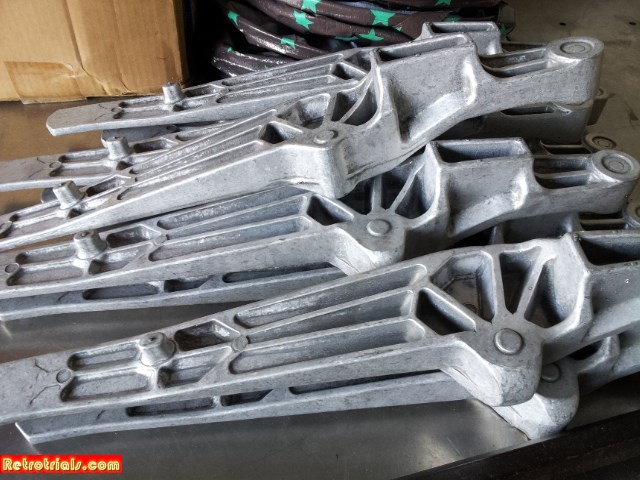