After Merlin dissapeared from the motorcycle world , Paxau continued with the new tenants of the same Merlin factory , GasGas.
Josep designed the first GasGas Halley for Narcis Casas and Josep Pibernat .He then designed and created a working prototype of every model until he stopped working for GasGas in 1996.
Why did he stop working for GasGas in 1996?. I have been told from several people the following account.
Marc Teissier started Sherco under the brand name of Bultaco. He hired the design master of Trials Paxau to develop the first Bultaco / Sherco Trials bike. Paxau worked at Torrello creating this project from nothing. During the process many many GasGas parts were incorporated into the design of the new Bultaco/Sherco. I remember the reaction myself when the first Bultaco /Sherco was released to the press and photos were shown workdwide. The Bultaco was very similar in many respects to the GasGas. The prototype also allegedly appeared to have many many GasGas parts fitted to it.
The two owners of GasGas were upset that Paxau was designing for the competition using the knowledge that he had gained from their employment . They were also annoyed at GasGas parts allegedly being used on the Bultaco.

Jim Snell from GasGas USA was assigned the task of establishing the extent of the similarities between the GasGas and the new Bultaco. He completely stripped the Bultaco and photographed and weighed every component , taking digital images of everything.
Jim Snell's dossier of Snell was titled: "The Bull Stops here"

As you might imagine , GasGas were very annoyed .
It was at this point that Narcis Casas and Josep Piberbat decided for the first time to develop and design all of their bikes in house at the factory in Girona. Paxau was no longer employed by GasGas.


Paxau now works for Sherco solely and in addition is a Sherco only dealer.


Whether the above is true or not Paxau had dedicated his life to the sport of Trial that he loves. He has led and developed the sport signicantly providing us all with bike designs which are now better and easier to ride , lighter and more reliable. 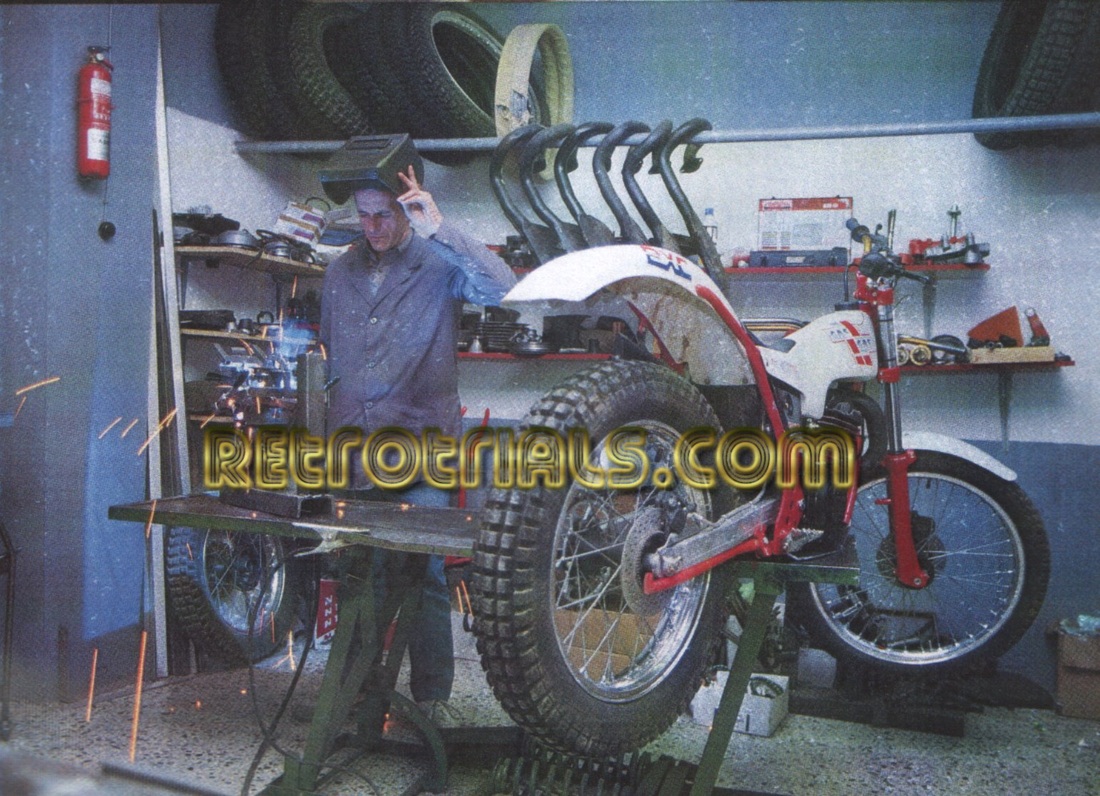 Paxau in the Halley days. Look at the rack of Halley exhausts behind him. Halley and Merlin exhausts are all stamped with the the name "Paxau" 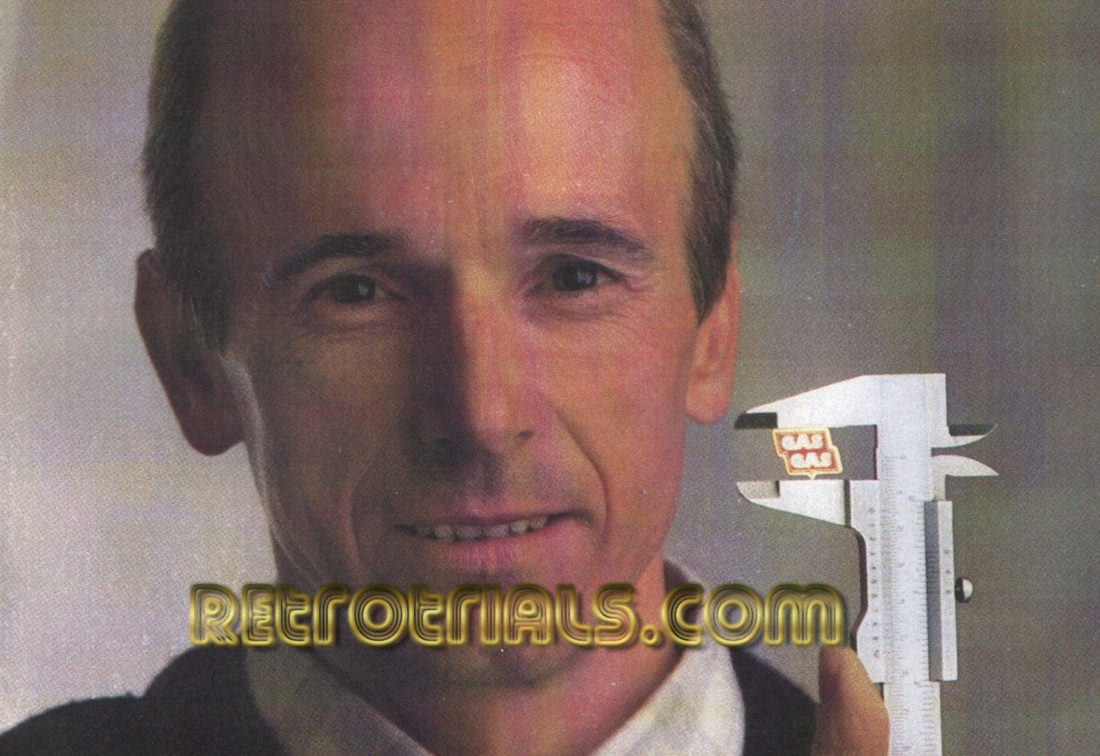 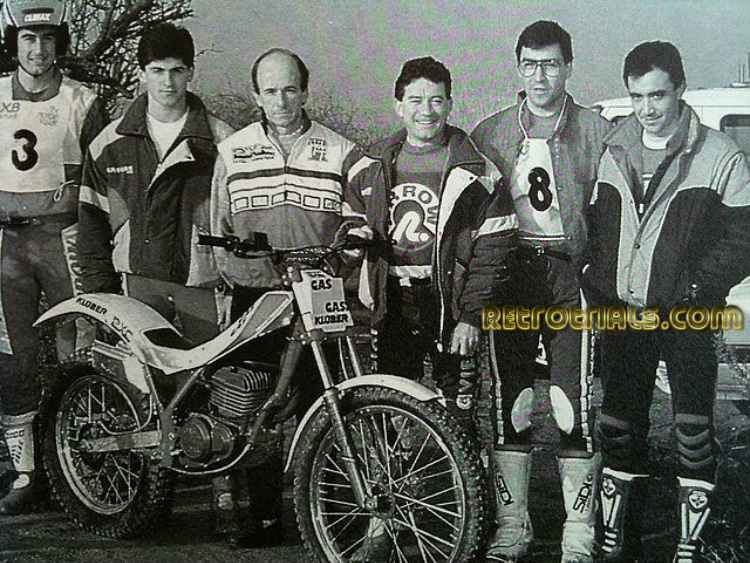 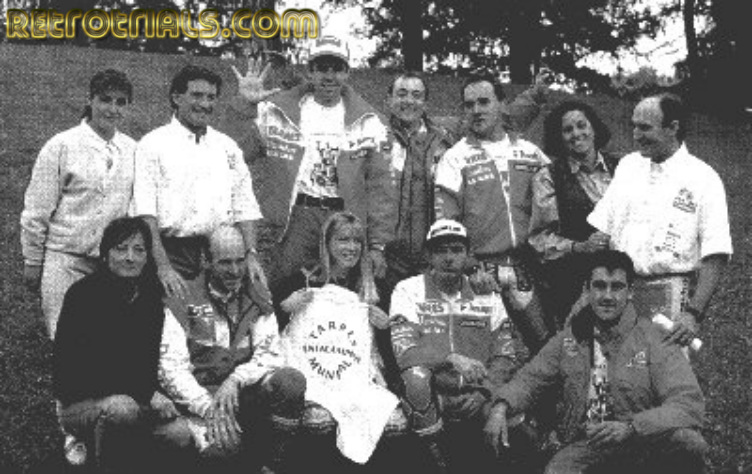 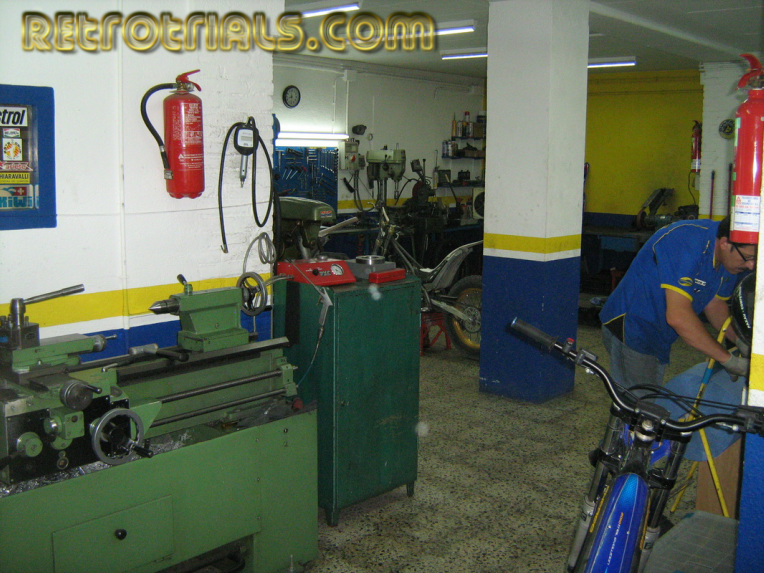 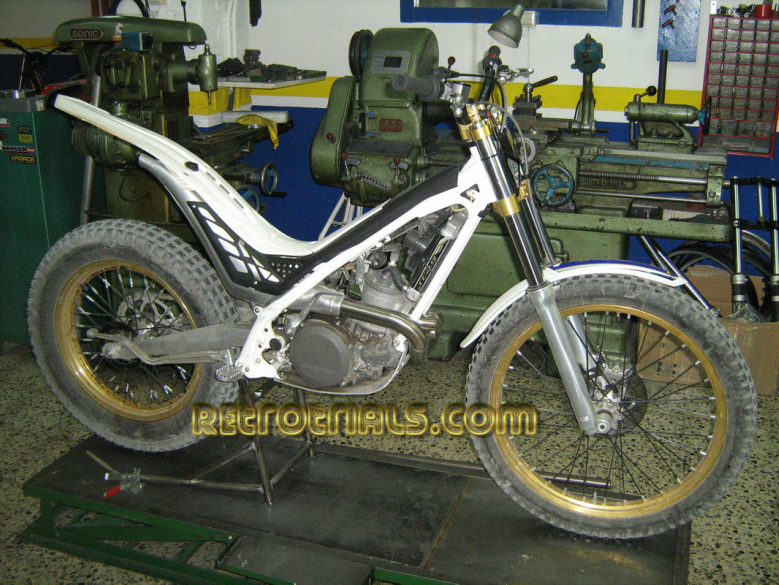 The 2012 model before it was released 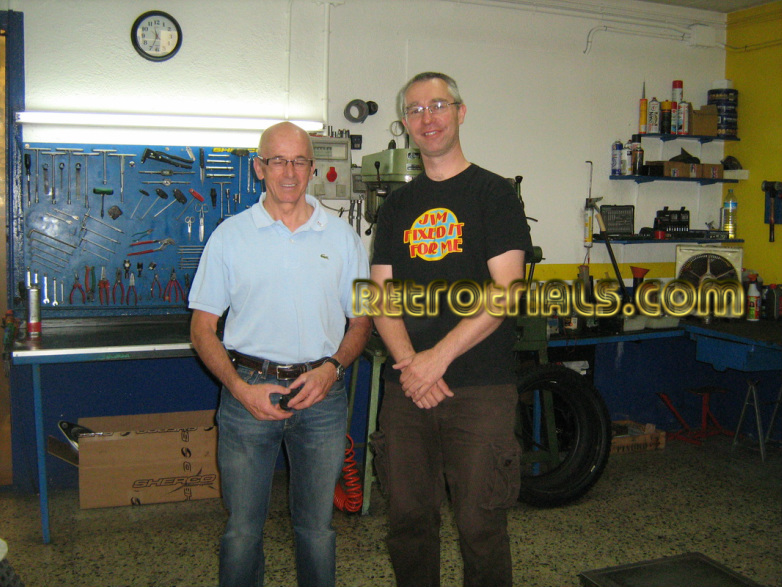 The Author and Paxau in his workshop in Torello 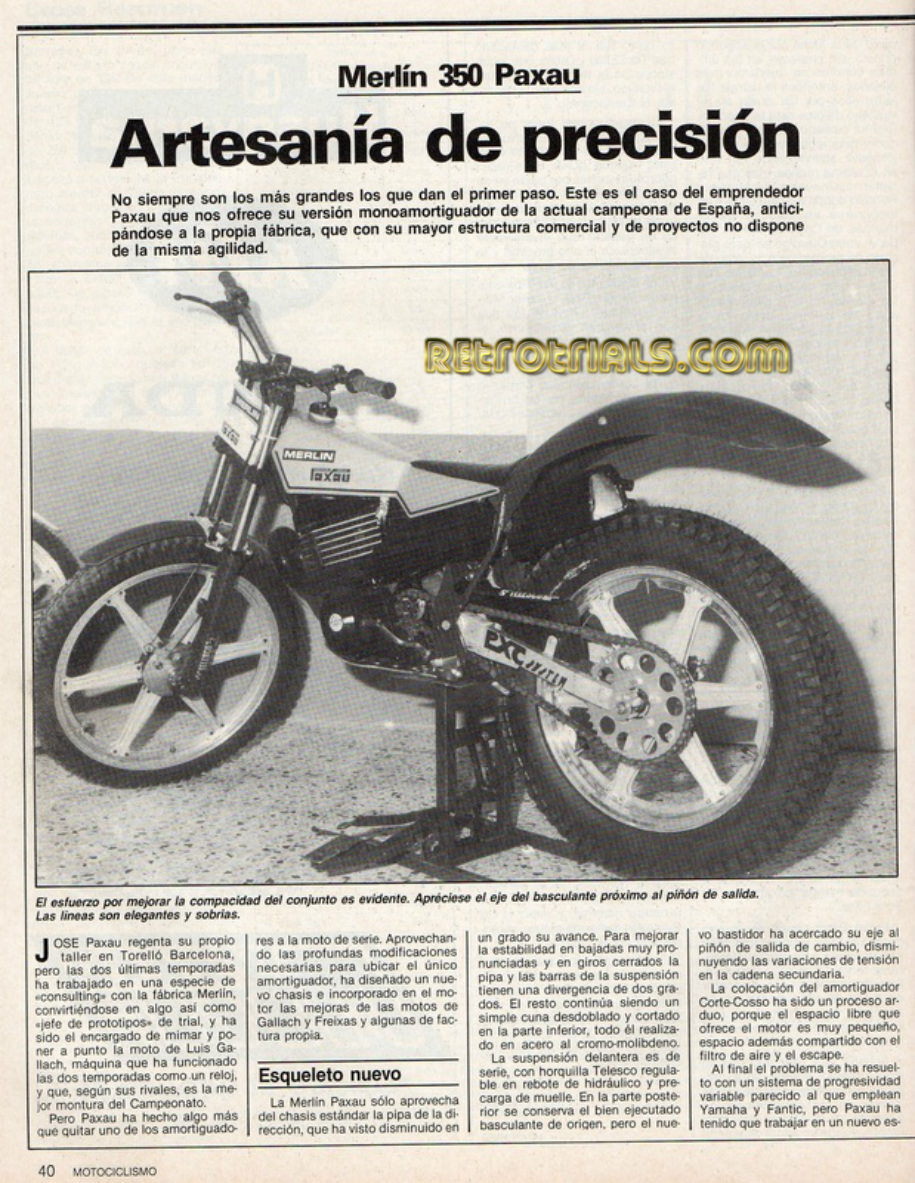 The effort to improve the compactness of the set is apparent. Witness the axis.
The standing facilities are elegant and sober.

Not always the biggest that make the first move. This is the case Paxau entrepreneur who offers us his version of Ia monoshock champions of Spain, in anticipation of Ia own factory, with the most commercial and project structure does not have the same agility.

JOSE Paxau runs his own Torello workshop in Barcelona, But the last two seasons has worked in a kind of consulting with the factory Merlin becoming something like trial prototype and has been commissioned to pamper and  Iamoto about Luis Gallach machine that has worked both as a clock ternporadas and, according to its rivals, is the best
mount Championship

The only advantage of Merlin chassis Paxau standard pipe Ia Ia address has been diminished to an extent their advance. To improve Decreases the stability an utter and very tight turns Ia pipe and bars gives Ia suspansion Tienan a difference of two degrees. EI continues to be a simple rest cradle split and cut in the lower part, all made of chrome-molybdenum deIantera The suspension is
series com Telesco fork hydraulic adjustable rebound and spring preload. Ie back in preserving the well-executed swing of Oriqen but the new frame is closer to its axis shift output pinion reducing tension variations in the chain school. The placement of the shock Cosso Court has been an arduous process because the free space offered by The motor is very small, also shared space with the air filter and the exhaust. Eventually the problem was solved with a Variable progressive system similar to that used  Yamaha and Fantic, pere has Paxau had to work on a new one is cape and gives filter box, to win the precious living space. The position the piIoto also changed, flattening the tubes of the frame at the height of the footrests are now located below and back. The seat of a tank kit Soia sheet piece is raalizado (Remember it is a prototype) of angular standing facilities and an air Fantic. To make the bike more compact and therefore, improve the fuel handling the deposit of this Iigeramente delayed datalle incorporating the latest market developments such as the Honda 250 or Ia Fantic 301.


Variations in the group propellant are intended to soften The response, while retaining Ia power and speed necessary to the requests of the pilot. The decompressed cuIata was very basic details to the energy of character of v is put locks

EI formos exhaust again more classic, with two cameras tranqui Iizadoras, while the second is not necessary for the proper operation of the engine and only mission is to lower the decibels. Complete review of Ia that Paxau been made to the power unit, has not been employed part Ia of transmisienes. EI utiIiza clutch springs as an element of pressure on the diaphragm of Ia Iugar series and is operable with a finger. Finally, to make better the response of the new thermodynamics, the second and third speeds are shorter, and closed with each

The enthusiastic Paxau is fully satisfied with his work (all parts are made by hand by himself) and struts Ia has already received approval of his stalwart partner dynamics Luis Gallach. The creator says has hocho all for pure Ia afijado on admission, which is now inclined thirty-five degrees. It retains the carburetor of origin, aunqus appropriate settings with a new thermodynamic Ia. Also have increased incercias that enhance the feel of very low revs. The filter do air (also in sheet) has changed its shape to let step to the shock, and Enorpora Ia a new silent admission and alemento filter, which has a simple and effective removal of The upper part. tion and, most of all, for personal satisfaction The weight of this prototype is estimated at 91 kg (95 Ia Merlin series) 'that can be easily lowered with a kit and filter material more Iigero. Anyway the future is not very clear, as always produces Ia has the final say Gerona bet wizard by artisan Torello
page 4 paxau interview