Part of the Kamikaze brochure

Rocket engineer and scientist  Arnold Neracher with the Kamikaze bicycle.
Here is the explanation of this project as presented by KAMIKAZE back in 1995:

KAMIKAZE, the American mountain bike manufacturer who pioneered the idea of bicycle speed records down speed ski runs with their original 160.001 record at Les Arcs in March 1994, has moved away from the steep slopes to the flat to achieve higher speeds and new records. Leaving behind their gravity powered speed record attempts with the KL08, KAMIKAZE has developed a new high tech bicycle capable of speeds of 250 km/h on the flat.
Always looking to push the limits out further in search of speed, BERNIE SCHREIBER, former World Motorcycle Trials Champion and creator of the KAMIKAZE bicycle brand, has teamed up with his Swiss distributor CLAUDE JAN of CILO SA and Geneva based engineer ARNOLD NERACHER of  EXOTIC THERMO ENGINEERING to replace gravity with rocket power. The KAMIKAZE REGULATOR RP 220 has a high tech rocket engine that produces 550 horsepower at 220 km/h attached just under the saddle. HYDROGEN PEROXIDE H2O2 is the potent fuel used to power the compact engine that potentially can propel the bicycle and its pilot to speeds of 250 km/h in just 6 seconds, if he can hang on. 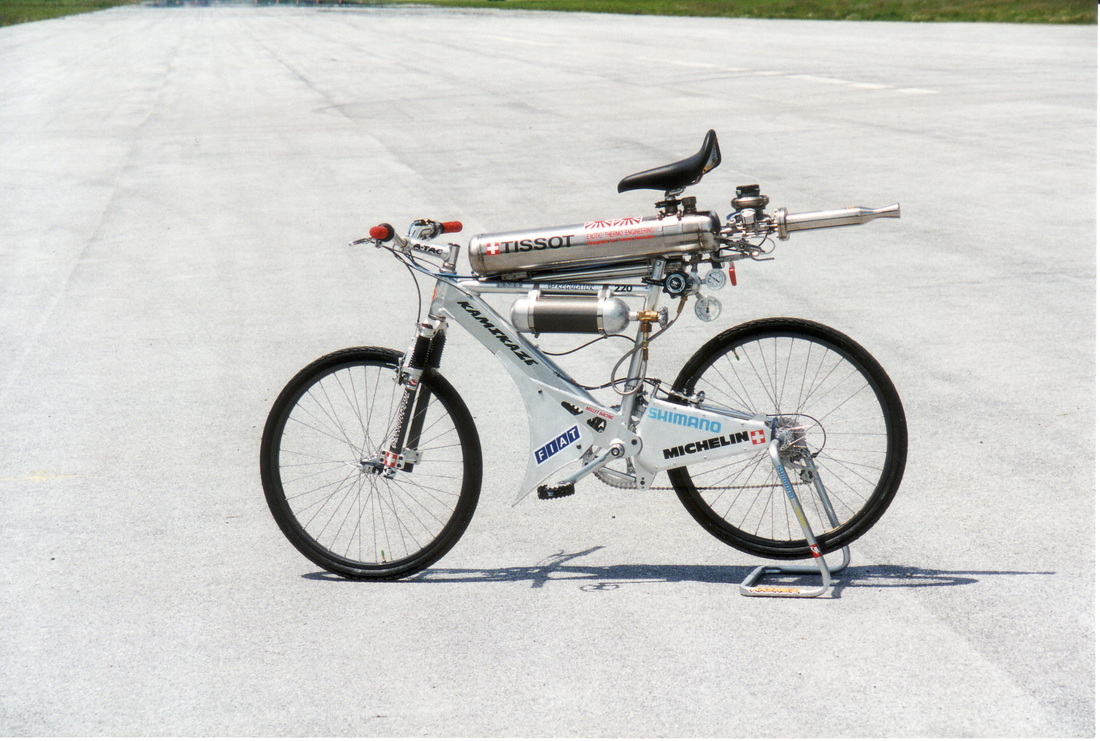 KAMIKAZE has commissioned Swiss chemical engineer Arnold Neracher of Thermo Exotic Engineering to develop rocket propulsion power for the mountain bike. He has designed a small rocket engine that is capable of producing up to 550 horsepower using hydrogen peroxide fuel that will propel the bicycle and its rider to speeds in excess of 200 km/h. The Geneva based engineer already has his name in the Guinness Book of Records for the development of Water Thunder, a water vapour powered rocket car that develops 15,000 horsepower and a World Speed Record of 343.52 km/h in only 200 meters and can accelerate to 460 km/h in 2.12 seconds! 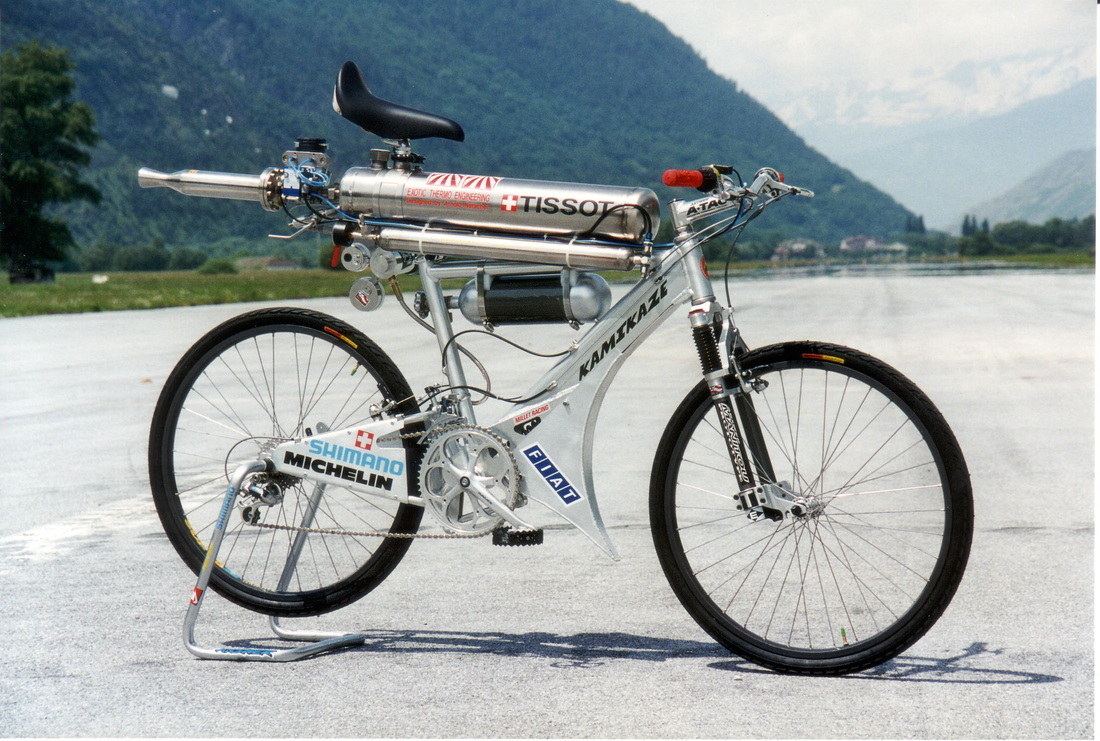 Bernie schreiber - the Rocket Bike man
Hydrogen peroxide was first used as a propellant for submarine torpedoes and during WWII the Messeschmitt ME-163 German fighter plane was produced. In 1961 the X-15 hydrogen peroxide rocket aircraft reached a speed of 4000 mph and the potent fuel was used in the James Bond film "Thunderball" when 007 escaped from the bad guys using a hydrogen peroxide rocket belt which had been developed by Bell Aircraft. Since then several dragster rocket cars have used hydrogen peroxide power units, but the KAMIKAZE REGULATOR RP 220 is the first bicycle to have such an engine. 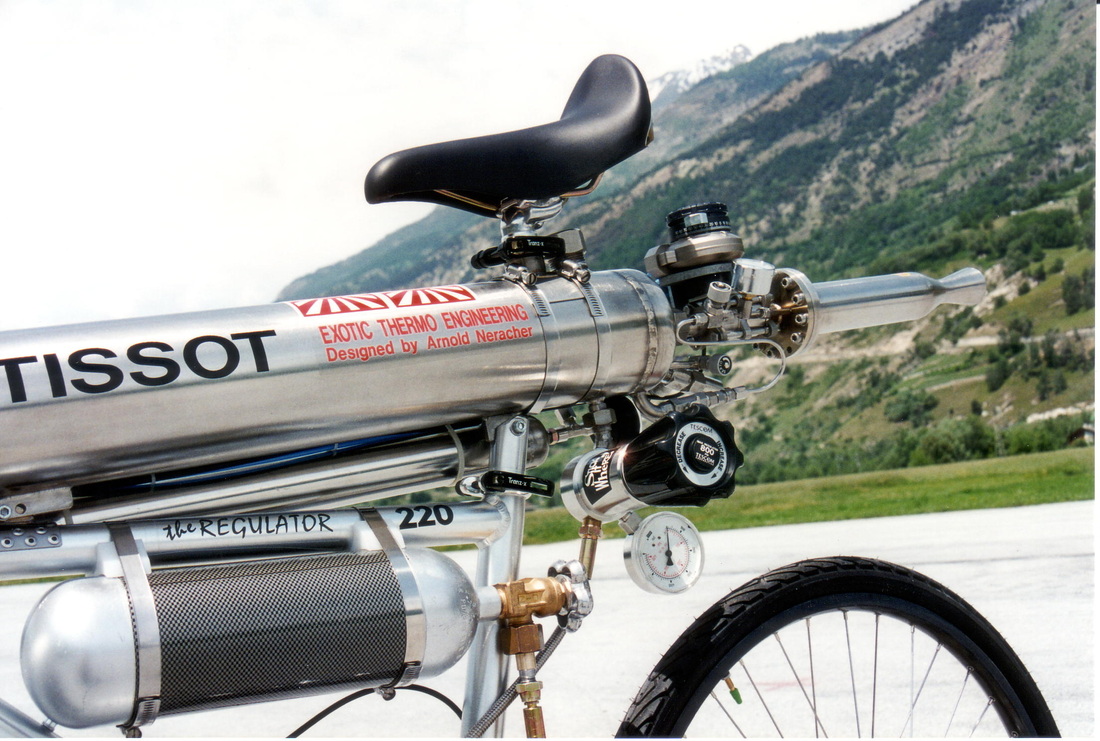 Bernie schreiber - the Rocket Bike man
REGULATOR RP 220 POWER UNIT
The rocket engine on the REGULATOR RP 220 is made up of a fuel tank attached along the top tube, with a smaller tank containing pressurised nitrogen underneath the top tube. The nitrogen is used to pass the hydrogen peroxide under pressure into the combustion chamber which is a long nozzle behind the saddle. The amount of fuel that passes into the nozzle can be regulated by adjusting the pressure of the nitrogen. When hydrogen peroxide enters the catalyst chamber it passes through a ceramic or silver grill which causes the reaction to produce the thrust gases. The seat tube would normally pass through the engine, so a special mounting had to be made so that the saddle could be fitted to the top of power unit.
The engine is turned on and off using a button switch next to the right hand grip on the handlebar. When the button is pressed the hydrogen peroxide is passed into the rocket nozzle and when it is released the fuel is cut off immediately. To obtain stability before engaging the rocket engine the pilot will pedal the REGULATOR RP 220 to 30 km/h.
ROCKET ENGINE SPECIFICATIONS 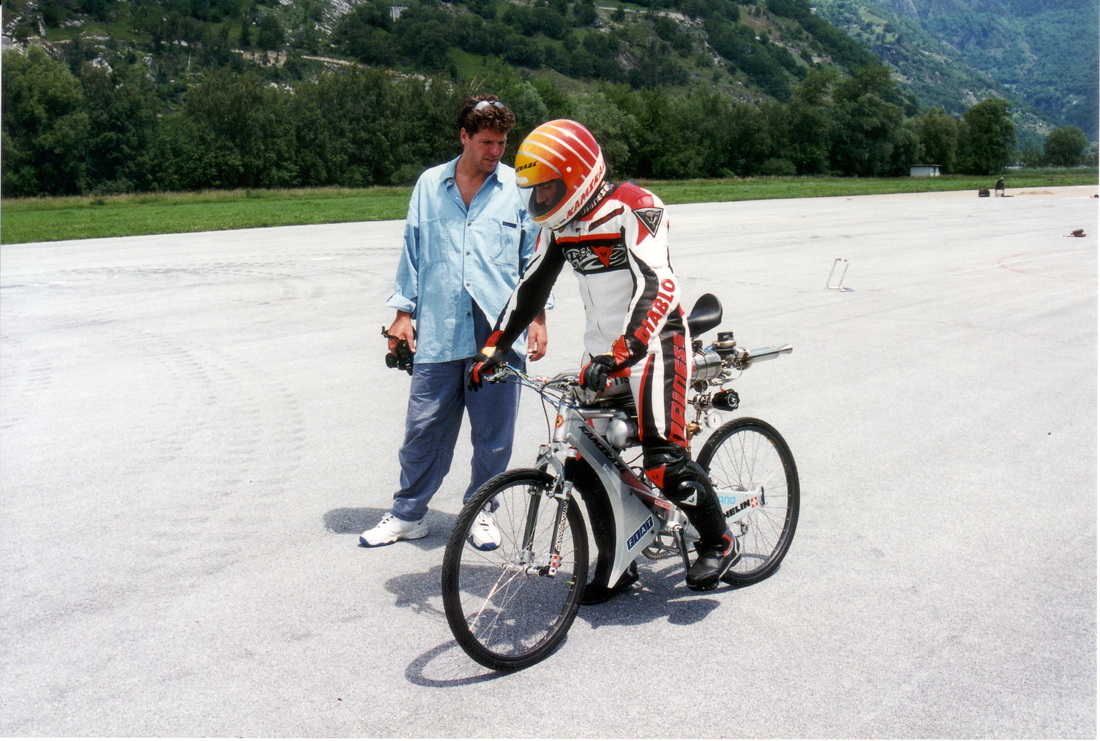