Here we were, at Tommi's unit. We pulled up and Tommi must have heard our car as he came out to greet us. We had the official Tommi Ahvala welcome to Finland. We then followed Tommi into his unit.

I'll explain how I was shocked in a minute, but for the moment let me explain to you what Tommi now does. This guy is super charged with energy. Tommi is the Finland importer for GasGas motorcycles. Tommi also still travels back to the US several times each year for a series of worthwhile Trials stunt shows out there. He started this in 1999 but has scaled it down from marathon career in more recent years. Tommi's skill and energy is spent on upgrading new vans to a custom specification. He fits rear bike garages, rear workshops, custom lighting inside and out, regular changing colour LED lighting systems, upgraded music systems, rear reverse camera CCTV systems. Upgraded trim, sinks, cookers, appliances, storage systems. You name it Tommi does it and he's one busy guy. This here is the first picture of 10 straight vans he's got to fit out, one after the other all in a different way. He gets delivered the new van after arranging a spec with the new owner and then returns it upgraded and perfect.
Finland has a population of just 5 million people situated on a land mass about 2 and a half times the size of the UK. Most people tend to be located around Helsinki and the other major conurbations. Tommi states that in a small country like this his Trials success has brought him nationwide recognition and almost everyone knows him. As he says "Everyone knows Monkey, but monkey does not know anyone”.
So, Tommi is a very busy guy with his fingers in a number of pies. He's also so highly energised. In fact I can't remember anyone with more get up and go than Tommi. He ought to be on stage motivating people. I'm not joking. You wait ....by the end of this interview you'll understand what I mean. I've never even used the phrased "Energised" before, but it's the only way to describe Tommi. He's a flat out guy, working until late, going away for weeks for work, expanding his business, completing major projects on his house,  plans for this, dreams of all sorts more. He's incredible. This is one indelible mark that being with Tommi leaves on you, but there's another one as well. 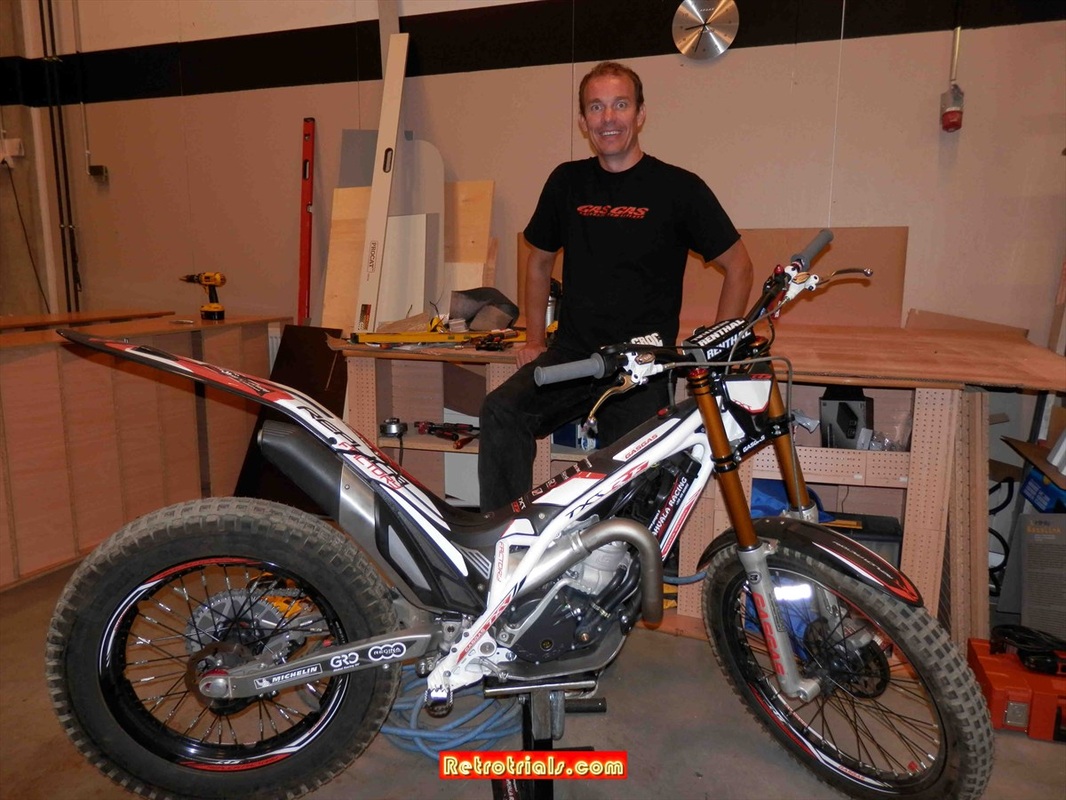 2013 Tommi Ahvala Interview WWW.RETROTRIALS.COM
Remember the intro on the first page ? "Tommi the steely cold Finn". Well nothing could be further from the truth. Tommi Ahvala is the friendliest, most outgoing, welcoming, crazy, off the wall, cheeky chappy you could ever want to meet. This guy could go on stage as a speaker or a comedian. He's great fun.

Don't you hate it, when you find out that you've had something wrong all these years ? I certainly had got it all wrong.

Tommi showed us around his unit. He's a got a lot of GasGas spares stored here, as you can see. There's loads more as well and  equipment used in kitting out vans. The all important kettle is there as well. 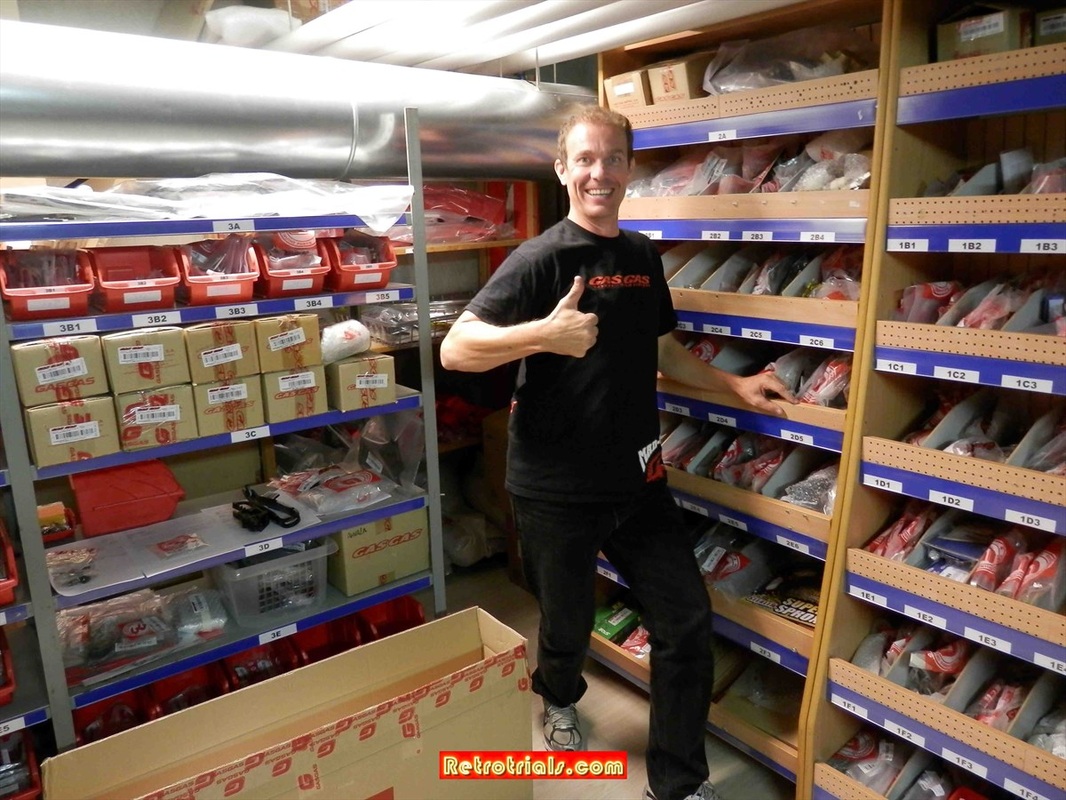 2013 Tommi Ahvala Interview WWW.RETROTRIALS.COM
Amazing fact number 1. Tommi Ahvala's mother runs Tommi's GasGas website completely. She is a gift made in heaven for him. Now get this !  Tommi's mum lives in American time. Yep, you heard right. When everyone else is asleep she is awake running the Ahvala GasGas parts web sites and dealing with show enquiries from the US of which there are plenty. What a good Mum. No wonder Tommi's happy, he's got it sorted. 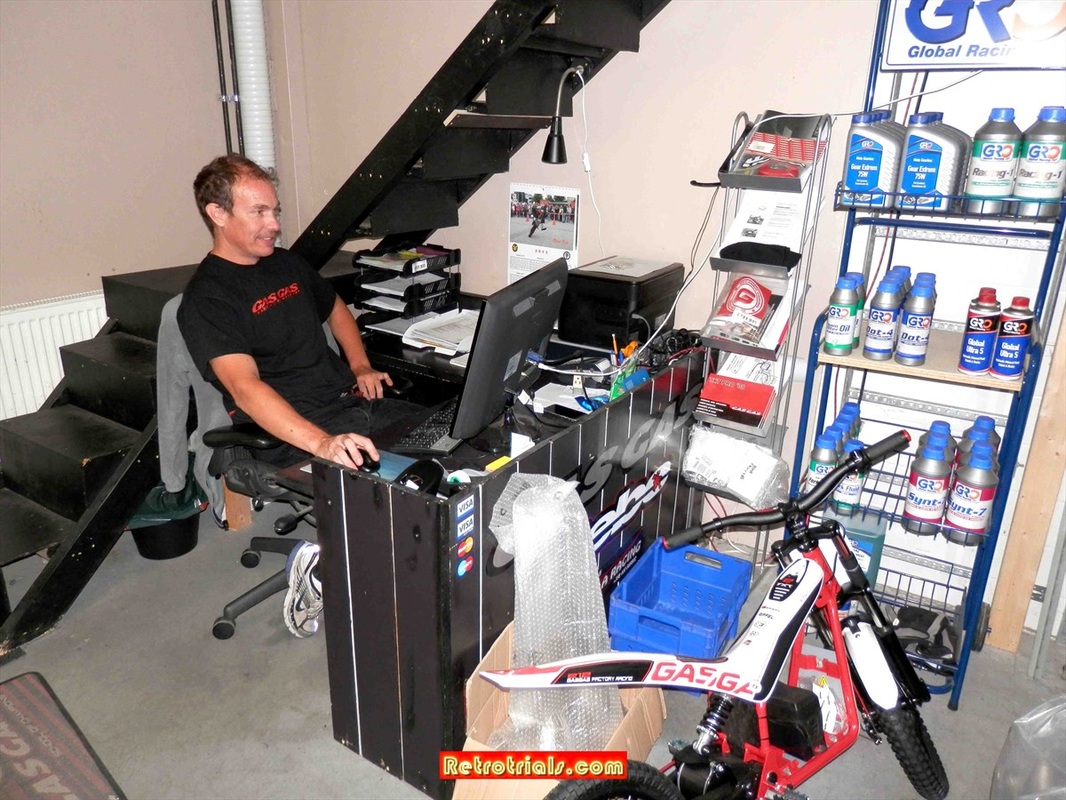 2013 Tommi Ahvala Interview WWW.RETROTRIALS.COM
We had a good time around here and made some great plans for the following day. Tomorrow we'd meet at Tommi's house at 7.45am so we'd head out to a Finnish Championship trial.

What a day we had in store.

Off, back to the hotel. As I mentioned earlier this hotel was a bit off the wall but it was superb. I'd really recommend you stay here if you go to Helsinki. 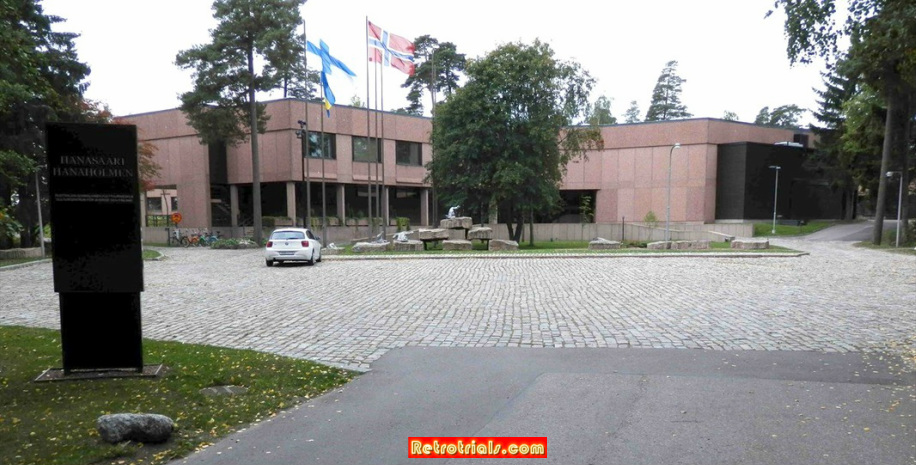