Yes all of most of my life. I used to live with my parents 1 kilometer away.

I have 2 sisters, younger, one is 4 years younger than me and has 2 kids, boys, they already have electric bikes, but they live in Pamplona and the other one is a 16 years younger than me. She was born when I moved to Barcelona so I lost her childhood cos I was travelling around the world, so it’s my sister but it’s like when I saw her the next time maybe she was 15 something like that.
How old were you when you got your first house, as you were on the road all the time?

I moved to Barcelona 87 when I was 17, 86 I stay in Trueba house as he was the importer for Beta, so I spend a lot of time there, then I move to another friend’s house for a few months, then I rent a house in Sant Feliu de Codines very close to Andreu because I was riding with GasGas. In 95 when I sign for Beta I move to near Trueba’s house again and then I rent a house and then I buy it in 2000 and already sold it a couple of months ago.

Your father distributes the Estrella Damm?

Yes, it’s very popular in Catalonia but not very popular in the north but very popular in Catalonia.
Look at the riders bib. Estrella Damm  have long been a sponsor for Trials In Spain.
This is a photo of Steve Saunders at the 1987 Trial de Sant Llorenç World Trial. A great time in Trials , but not a good day for most riders as they all arrived at the finish out of time.
Lluis Gallach on the Mecatecno Dragonfly won.
The company has been going for a long time?

Is it, the beer, made locally?

No, they make in Barcelona, we bring the beer here and we sell it. He has been doing this work before, he work for Coca Cola and other brands, but now he only work with this.

So do Estrella bring the beer to you over here and you distribute it from here?

Yes, we are kind dealer for them, they bring the beer here and we bring to the bars and disco.

What introduced you to the trial cin?

Trialsin, my father. My father and his friends they practice trial in 75, I was 5 or 6 and at 7 years  in 1977 they buy me a Cota 25 (motorcycle), they give me for a big present when I turn 7. I start to go with them. Then my Father went to 3 days of Cingles (Popular trial in Spain attracting foreign riders as well) and saw Andreu Codina and bring me pictures’. I have an autograph book, they bring me many autographs and a few pictures of one guy doing trials with a bicycle and it was Andreu. So they buy me a bicycle and I start to make this and I make this for 2 or 3 years. I don’t like, I don’t like it, I make it, but when I make this I was only thinking about doing this with the bike. With the moto. Before the bicycle I have the moto so it is like going from above to below. So when I was doing the bicycle I was thinking about riding the bike. In 83 I finished with the cycle and started riding with the moto bike.
Who did you ride and compete with?

With Ot Pi as we were the same age and every year we were riding the same level.
Did you ride on a Championship level in the trialsin?

Yes, I finished 2nd in the Spanish Championship in my class after Ot Pi. I have won one race. Ot Pi was the champion and them me. I was the 3rd in the European Championship. I remember in my class there was Ot Pi, then one year after there was Joan Pons and then 2 or 3 years later there was Marc Colomer. 3 years before us was Jordi Tarres and other riders.

Did you come to ride in England ever?

Yes, we come to Birmingham. 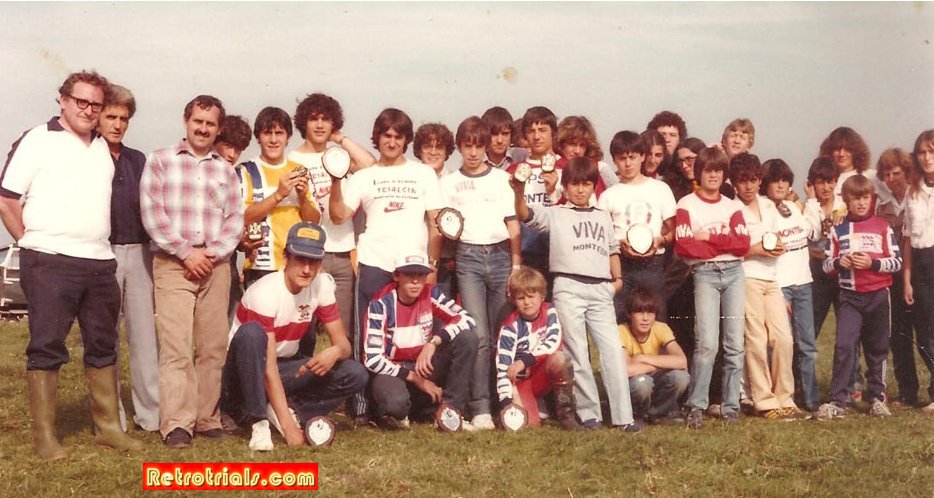 Amos Bilbao Interview WWW.RETROTRIALS.COM
Did you ever ride with the Sandifords?

No, I went two time with the bicycle and I think they are the people that made the trial, sure. We go all the Spanish riders in one bus all together with the tents and I think it was Sandiford in those days. I travel with all the Spanish riders, Tarres, Pons, Colomer, Ot Pi, all together. 53 kids all together. I don’t have any pictures, all together, yes yes.
Although Amos isn't in this photo this is a great picture of the scene which Amos has already painted to us. The Trialsin tour bus, the kids, the bikes being unloaded from underneath. The faces I recognise in this photo at Andreu Codina on the far left and the little Ot Pi, 4th from the right. 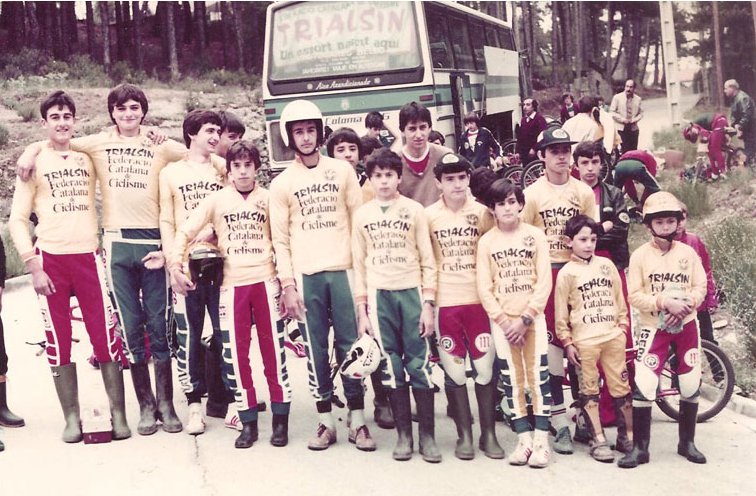 Amos Bilbao Interview WWW.RETROTRIALS.COM
Where did your bike go?

Inside, underneath, yes yes, with the tents and everything. 3 or 4 people together in the tent. I don’t remember about the food. We are camping. The first time it was 3 races. It was Spain, Germany and England. On the way from Germany to England we stop in Bilstain for practice and camp there and the year after we make Spain, France, Germany, not sure about Belgium and UK. I don’t remember the 2nd year. This was 82 and 83 on the bus- ha ha.

Did your parents go with you?

No, no one. We go on the bus with Pedro Pi and he was the man in charge. It was 1982. I was 12. It was good fun, yes.
There is some short video of Amos riding at the 1983 Trialsin European championship.
I have placed the video on the video page of this site with timings of where to see him  :)