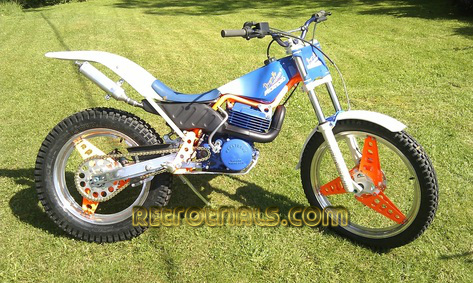 The Mecatecno Dragonfly was where the real hope lie for Mecatecno in the Trials market. The design of the bike is stunning and was entirely revolutionary. Some would call it whacky. It was outstanding and very different to all apart from the Merlin DG350 that was released in late 1986.The Merlin incidentally was built about 40 miles away in Girona. They were head to head in competition.

The Dragonfly featured the same engine as the MR326  and it was painted medium blue to match the tank unit , front number board and seat.The main exhaust was the same apart from the no aluminium end can which is you can repack.

The frame was very similar but with slight adjustments for the changed brake master cylinder and the altered rear subframe.The subframe was made from light steel tubing. The frames were coated with a bright orange/red colour which was very striking.What is most noticeable are the Nagesti 2 spoke wheels. The spokes are made from pressed and shaped aluminium attached to Aluminium Akront rims. The hubs are beautifully shaped cast magnesium units. The from forks were light aluminium and made by "Ideal" . They also made the custom rear shock absorber.The Dragonfly Logo was designed out of house by a graphic designer who was described as "Crazy" in a jokey way.
At this time Mecatecno started Vacuum forming thier own plastic mudguards at he factory to keep costs down.
The plastic tanks and deep gloss paintwork were contracted out.
This engine had cost the company a serious amount of money and time. Mecatecno were a small company with small production runs employing just 10 people. Building thier own engine had consumed any earnings the company had made on the childrens bikes they were still making.

The engine was  ridden at all rounds of the 1987 and 1988 World Trials Championship by Lius Gallach , the multi Spanish Championship winner.
Gallach was a very experienced rider.He was a great rider to secure for Mecatecno and they had to pay him well.  He was accompanied at many of the World rounds by Juan Ruiz who was a very experienced mechanic.
During the 1987 Spanish round of the World Championship Gallach won his first and only win at Sant Llorenç de Morunys. This was a great moment for Mecatecno and i have been told that Ruiz cried at the result.
During the 1988 World rounds Gallach came to England to ride the World round on his Mecatecno Dragonfly at Butser , near Petersfield in Hampshire.Ruiz accomnpanied him. The weather was very bad , the chalky sections were very slippery. The water from the miles of roadwork found its way through the airbox into the engine. Although his engine was damaged he did finish the trial.
After the trial they drove to Yorkshire and stayed with the Malcolm and Rhona Rathmell. That night they rebuilt the engine in the Rathmells workshop. Being the business man he is , no doubt Malcolm was considering whether he should consider going for the Uk importship.
The next weekend was the Irish round and so they took the opportunity of some workshop space to rebuild the engine as afterwards they knew they would be back in the van.
The engine was a strong powerful unit but it did however have some problems which resulted in warranty work for the dealer which in turn cost the factory. The 3 fork selectors in the gear box were cast in bronze. On occassions , especially roadwork these forks overheated and they partially melted causing selector problems.
Later engines were fitted with hardened steel selectors and also slightly differently cut gearbox teeth.Another problem that caused problems were piston seizures. the large piston expanded to much in size when hot and caused these seizures. Again this only happened when the motor was pressed really hard.
These problems were as easy as you might imagine to fix. The main problem was that the company that made the gearbox components also made the gearboxes for all of the other Spainish motorcycles. Mecatecno's small purchases didnt afford them much clout when it came to re-engineering parts and altering dimensions. It was always - "When weve got time".
These problems were evident at the Irish World round during March 1987. Gallach broke 2 Dragonfly's during the competition and abandoned them around the course.He was reported to the trial officials for changing his motorcycle No action was taken against him
Towards the end of 1987 the Auto cycle Union of Great Britain saw the danger in wheels spokes that were large enough to get your limb caught in.They carried a rule banning the 3 spoked rear wheel. The works Dragonfly riddenby Gallach was adapted with upside down forks and regular spoked wheels

The Dragonfly remains one of the most stunning and well designed Trials bikes of its time.

The Dragonfly was not exported and remained available in Spain only.Frame numbers start with the number 2 , indicating this is Mecatecno's second Trials model.
Here are the Mecatecno piston dimensions - 77mm bore at skirt pin 18mm complete height 75mm from top pin to crown 32.50 from centre pin to crown 41mm The crown height from centre pin is the important one. Everything else can be changed 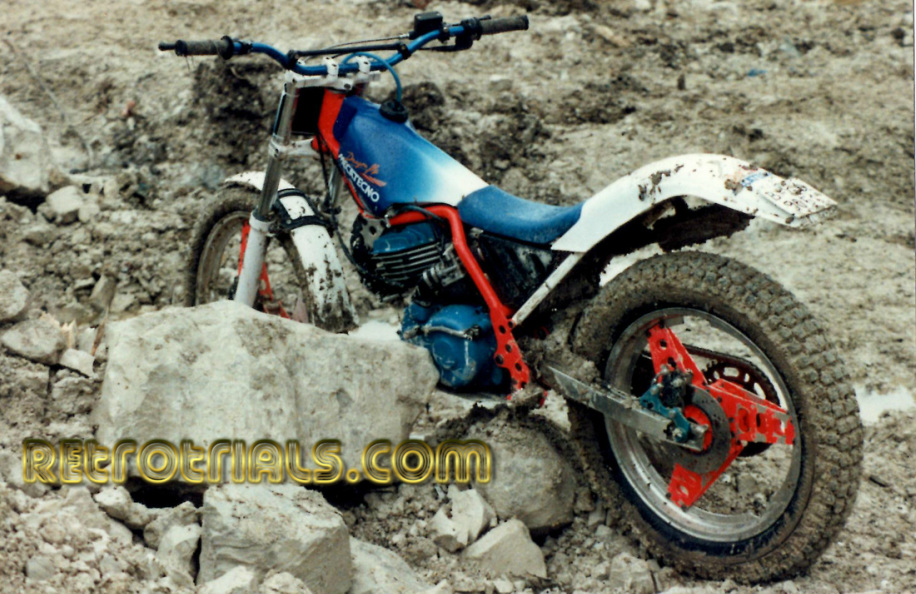 Lluis Gallach's factory Dragonfly pictured at the English World round 1987 at Butser Limeworks in Petersfield, Hampshire.
These factory bikes were under constant review and regularly being updated. Changed can be seen from one round to another , especially to the exhaust. Whilst the Dragonfly engine bears some relation visibly to the MR326 engine it entirely different inside. To give you an idea - the original prototype MR326 engine was designed with a chain driven clutch  , however all of the production models where gear driven.The origional engine was also designed to have upper and lower ratio's in addition to 5 gears. This would be a system operating similar to a Land Rover.. This idea became to complicated and fraught with problems and was dropped. 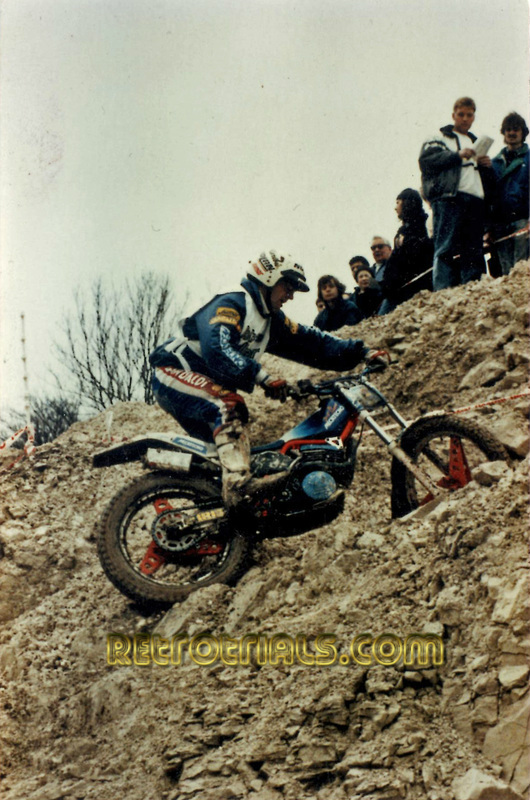 Lluis Gallach's on his factory Dragonfly pictured at the English World round 1987 at Butser Limeworks in Petersfield, Hampshire. 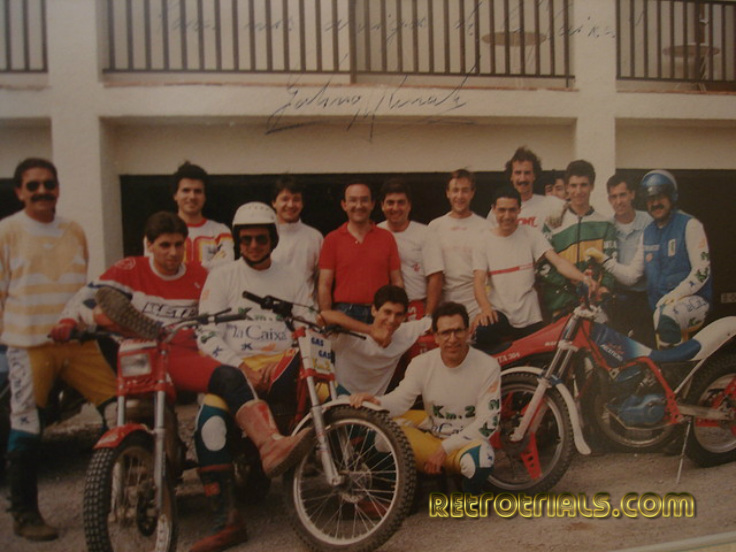 Gabino Renales (7th from right) standing with Trial fans , with Dragonfly in foreground 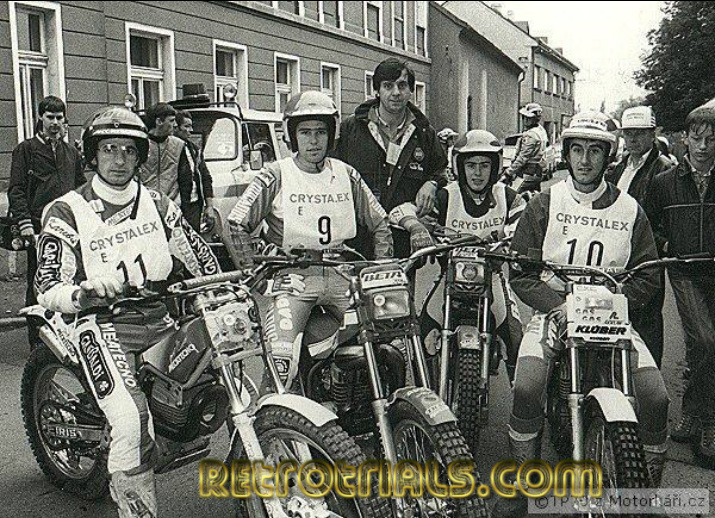 1987 TDN Spanish team.Lluis Gallach on the Dragonfly,Jordi Tarres on the Beta,Amos Bilboa on the Beta and Andrew Cordina on the GasGas 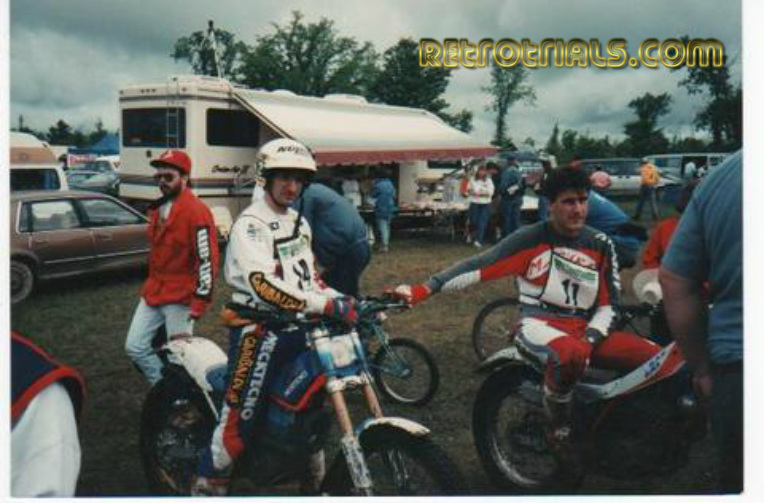 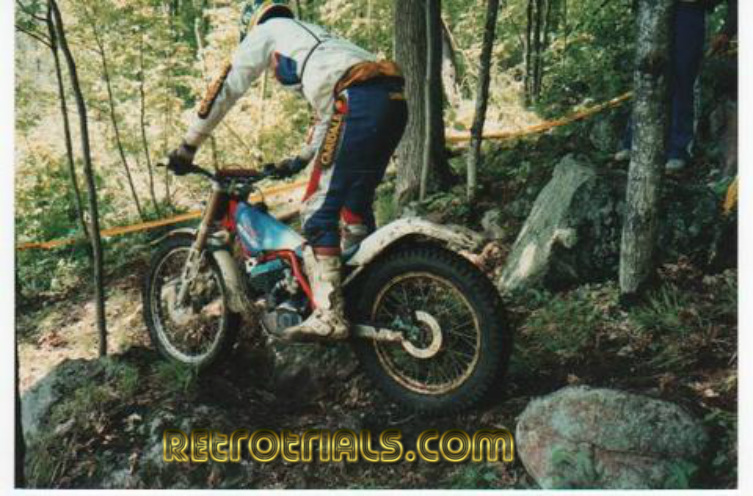 Gallach at the 1989 Canadian World round.This was one of the last appearances of the Mecatecno Dragonfly 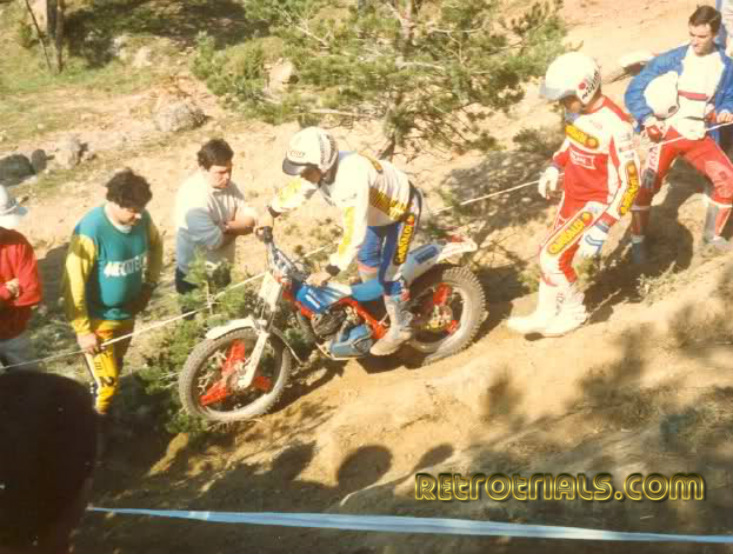 Gallach on board the Mecatecno Dragonfly 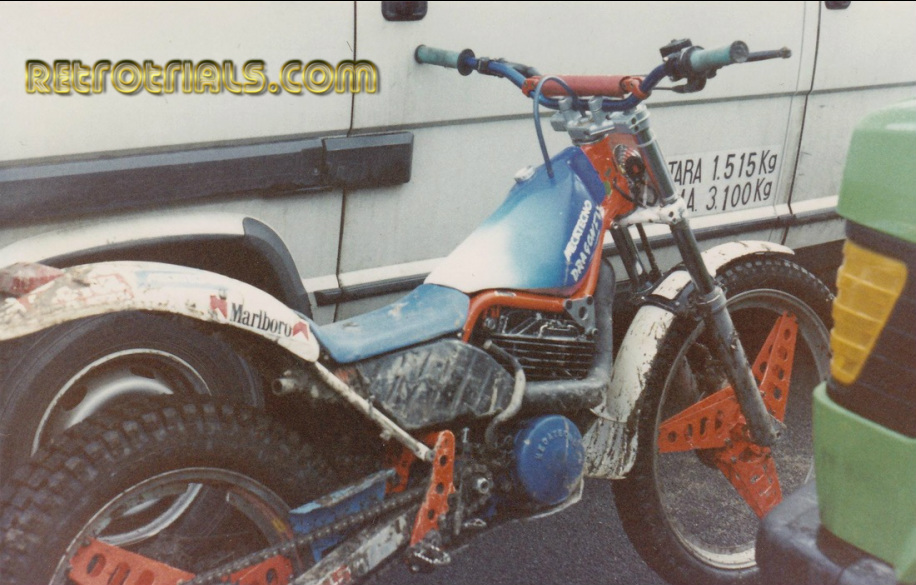 Gallach's Dragonfly at the 1989 Canadian World round 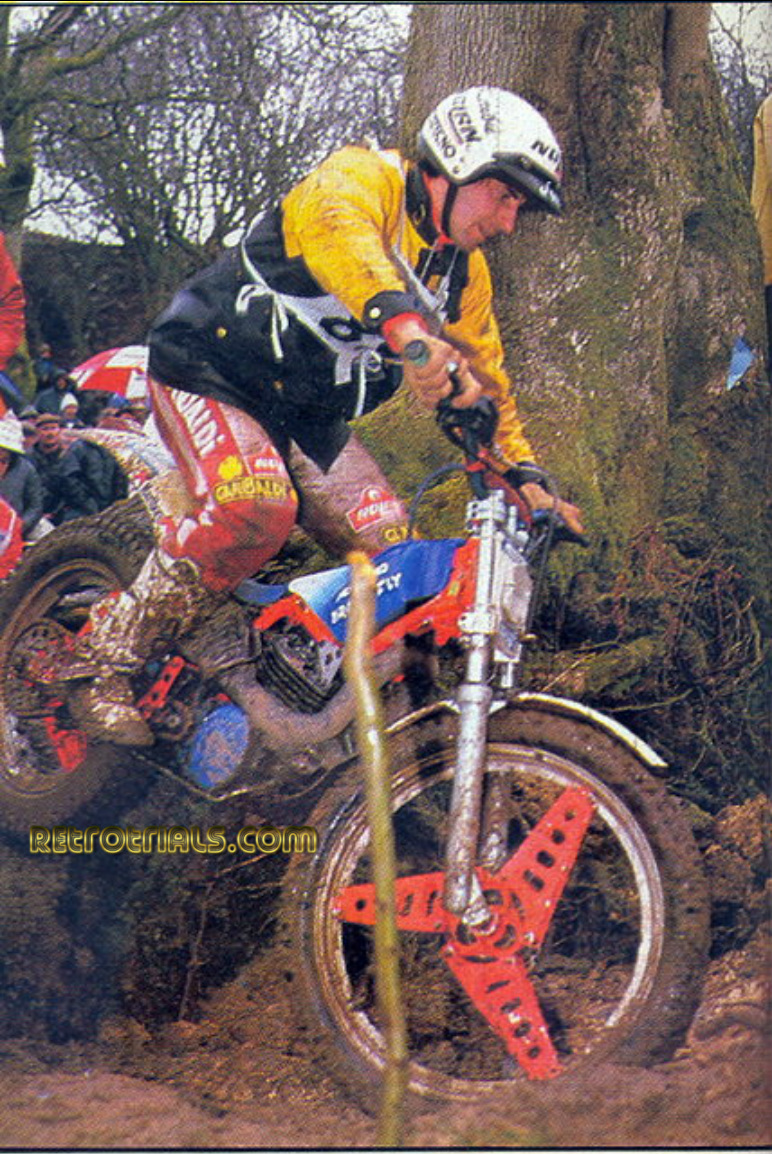