I drove a long way to get this bike. It was owned by a 25 year old guy who had a small collection of motorcycles in Lleida , northern Spain. He had a Lambretta , and Ossa Gripper and an old Moto Guzzi.
This was by far his worst bike. I was disappointed when i saw it in the flesh. The picture had become faded in my mind and id made my offer which hed accepted , weeks before. He had been good to keep it for me , so re bargaining crossed my mind , but he was a young man and hed done me a favor. I didn't thing he deserved me being cheeky , so i paid up
The frame was cracked in 4 or 5 different places. the petrol tank leaked from 2 holes.The silencer had holes in it. I knew i could repair these things.
The seat was near impossible to replace , and thank fully it was great.I kicked the engine over and it started from the thimble load of petrol it had in the tank.It had immense compression, I mean ...huge compression. The exhaust was noisy , but the engine was quiet.
Its a testimony to engine designers and builders Moto Villa and Gas Gas that the engine of this bike has survived in such great condition after years and years of obvious neglect and abuse from kids, no doubt ragging this across the hills. 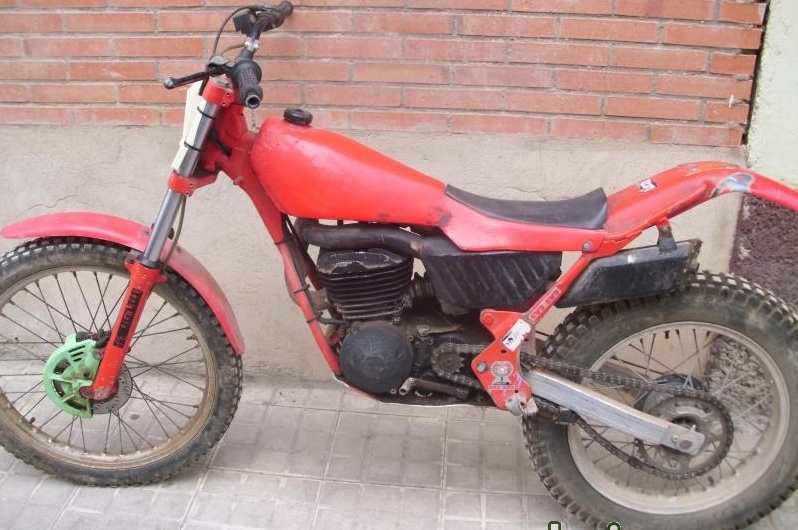 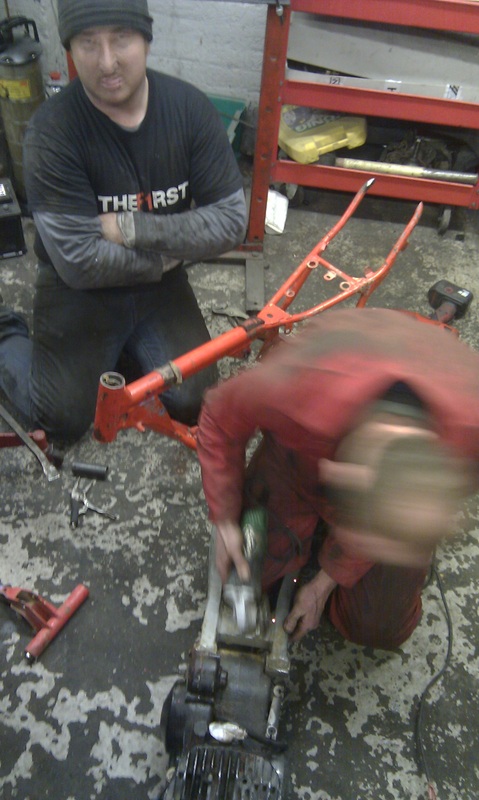 The first picture is of the announcement GasGas when I buy.Pictures always make bikes look good. I get there and the selleris a young man who knows nothing of the trial. He was in Llieda in northern Spain. He Lambretta Union Jack flag and some otherbike. I think he bought the GasGas for sale. He had a hard life.
Plastics are another motorcycle. The tank leaks badly. The frameis bent and it looks horrible When I drive home I finally start working on the GasGas. I driveLlieda in Santander and down the mountains was worse than ever. I have a lot of wieght in the back and the road is so steep forsuch a long long way. My brakes began to vibrate and get very hot. I urinate on my brakes as much fun but also to make thembetter - just kidding, but it is true.
I go down the hills in 2nd gear and sometimes becomes so fastthe van still 55 km / h. I touch the brakes, they are vibrant with heat. I normally do not worry, bu this time I thought I was in trouble.

I stripped down the GasGas
I am pleased and surprised that the rear suspension shock is good .
I will come to these parts later . I am lucky i think the only thing i cannot repair is the seat , but it is very good and i have a spare so no problem . I also have a genuine spare fuel cap as well in alloy which looks very nice.

When i restore bike i try and keep things moving. If ai have trouble with one thing i leave and work on something else

I start to strip the old paint and examine the frame.

The engine bolts all came out but the swinging arm bolts did not.
The steel bolt goes through steel spacers in alloy swinging arm.
I heated this up very very hot and then placed it in 30 tonne press , but this did not work. The force used tried to twist the frame and the press as well. I spent 8 hours with no luck.
I will come to these parts later. I'm lucky I think the only thing I can not repair is the seat, but it is very good and I have a spare, so no problem. I also have a fuel cap and original spare alloy which is very joli.Je am pleased and surprised that the coil rear suspension is good.

The motor bolts are all out, but the swingarm bolts did not.
The steel bolt passes through the spacers in the steel alloy swingarm.
I heated until very hot, then placed it in the 30 ton press, but it did not work. The force used has tried to twist the frame and the press as well. I spent 8 hours with no luck.
I then have a good mechanic friend Graham who is good trial rider. I go to him and in last evening yesterday i take to him to try and seperate it all. He tries to seperate on the press but it does not work.
Another of my friend Terry is there. He is also good rider of the trial and mechanic. They are the old school mechanics who repair and adapt , they do not just replace like the young onesHe was having bad day as he was given a non original clutch to fit to a ford mondeo and he fitted it in 6 hours but there was not proper clearance and the part was not working , so he was not happy.

They try with heat and the press but no luck.

They then cut the bolt to remove it.
The spindle was rusted to the spacers in the swinging arm. I will have to get new ones made or adapt from another moto.

There was strange linkage with bolts attaching to the frame at both sides. It was easy to release one , but the other sent the nut spinning inside. We manage to mend this and strip the frame.

Here are some photo of then
Thanks to Graham and Terry.They are skilled in their trade

This is real progress and i am happy

I show you the tank.

This is after much much work.

I fiberglass tank i strip of paint. I also pull off flakes of fibreglass and dig out bad areas.
I then repaired the holes with Fiberglass gelcoat. I also sealed the inside of the tank with an excellent thick sealer for the fiberglass. It will not leak now.
This still neads lots of work. The rear by the seat is broken slightly and needs repair.