Many people who have an interest in the Trials riding scene back in the 70's and 80's will have heard of Pete Hudson.

Peter started to ride when he was 17 and he was given a bike by a local dealer as he was pretty good on the pegs back then. In those days he says , you didn’t get paid , they just leant you a bike. Pete then got married and had children so gave the bike back as he had other commitments.  Then, some time later he had a newsagents and post office in Roehampton. He ran this for a couple of years but he didn’t enjoy being shut up all day . The Post office didn’t suit him . Bert Thorne who recently passed away was the managing director of Comerfords. He made Peter a great offer . He told him that if he sold the Post Office ,he could come and work at Comerfords  and run the Bultaco side of the business .It was big offer and Pete accepted.
Pete says -
I remember this young lad of 17 came over to Comerford’s  from America . He didn’t have anywhere to go and didn’t have anywhere to stay. He had come over with Marlon Whalley and Len weed to do the World Rounds. He was a bit upside down and didn’t know where he was going  , so I took him home. My two boys just idolized him.  He was like an older brother  to them. Of course , Bernie would go off to the factory and then come back  and we would go off in the van here there and everywhere. I would take Colin Boniface and Peter Cartwright as well ,to some of the rounds. I really just tried to keep Bernie's head on . Although he was a quiet boy off the bike , on the bike Bernie was flamboyant and would play to the crowd. He could do all of the tricks and he liked to show people that he could do them. Bernie was the first one to do the pivot turns , riding on the balls of his feet instead of the insteps and bunny hopping . When I saw him doing this  ,I remember thinking , trials is on the change .This is really different. He got taught this from a bloke called Norm Sailer at a Ski lodge in Donner Pass in North California .
He got a lot of influence from this guy . Bernie lived with us In West Byfleet for 2 years and of course became part of the family . Bernie just wanted to progress and progress, he’s a world Champion . That’s what World Champions do. Running with the World Champions all the time . Vesterinan, the Lampkins and of course Bernie was the most exciting time of my life .  As well as being an importership ,Comerfords had a big retail side as well. Bert Thorne gave Peter lots of leeway on different projects that he wanted to do at work. These included running the business side on all of the Alpinestars boots , Regina chains and Yoki clothing ranges. Peter was a draughtsman by trade so would also draw up all of the pattern parts for the Bultaco and travel to Italy to have them made. Bert Thorne was very influential to Peter.

As well as taking the top riders practising to Donkey Woods ,Pete would often be present when they would go the Beamish test track in Small Dole. Although this is a motocross track set on a steep hillside there were some woods with some sections there.

After the Bultaco days were passed , Italjet tried to rise out of the ashes. The initial Italjets were just painted green Bultaco’s . They were good bikes , however the new model that the company produced had problems. These problems included frames that didn’t flex , the carburation was placed too close to the exhaust ,the engines and gearboxes seized and the bike was too heavy .The company as a result of these problems self destructed. The UK importer was Martin Hardiman although non of the problems had anything to do with him.Peter had been the team manager at Comerfords looking after riders such as Vesterinen, Lampkin and Bernie.Reg May was head of the competition workshop for Bultaco and KTM. As a result of this great experience that Peter had , he was head hunted to run the competition teams at Italjet. But , he also had another possible option. Peter worked with Keith Thorpe who ran the workshop for the production side of Comerfords. He would deal with Warranty issues. Keith was the father of World Champion motocrosser Dave Thorpe. Keith and Peter would often have lunch together and Keith mentioned that there was an opening for a competition manager at Honda and that peter should go for it. The team already managed Eddy Lejeune amongst other riders . Peter didn't follow up this option , but looking back thinks he should have. Decisions are always easy with the benefit of hindsight. At this time Bernie was having success with the first prototype Italjet  winning four World Trials at the start of 1980 . Peter's friendly acquaintance with Bernie and Bernie's success on the Italjet persuaded Peter to accept the offer from Italjet.  Whilst these competitions went well , the production Italjet was a different story . Peter feels sure that if he had gone to Honda ,Bernie would have got a Honda biketo ride , but this is entirely hypothetical. After a while ,Peter left Italjet after a string of disappointments, just wanting to get out.

Following this departure from Italjet Peter sold the house in West Byfleet and bought the Spar shop in Farnham. Bernie and Peter have always kept in very close contact with each other. Peter asked Bernie to come down to Byworth stores which was our shop . Pete says - "We got him to jump over the kids for some promotional photos for the  papers. He did it easy". The photo of Bernie jumping my son shows Bernie on a Bultaco wearing SWM clothing. The Bultaco was Bernie World championship winning bike and I had kept it. He came along during his SWM days and jumped the kids, so that explains the SWM branded clothing. Later the shop was sold and converted to a dwelling .Peter and Gill moved out to Spain for 12 years and thoroughly enjoyed it but eventually returned to the UK. He is now retired and lives in Surrey with his wife Gillian.

Peter  -  Do you have a copy of the one trick pony video ?. No I cant get it. I’ve tried everywhere to get it. It was a really good video. Id have a copy of that if you can get hold of it.
Throughout many years of Pete's career he kept a number of scrap books containing photos and newspaper clippings about his own riding career , but mostly the riders he looked after  whilst working as competition manager for Bultaco and Italjet Uk. They give a unique insight into the Bultaco but particularly the Italjet days of the 80's .

Retrotrials has been lent this material so that others can enjoy it.

Thank you Peter for allowing others to enjoy this .Thanks to Glenn for your help also.:) 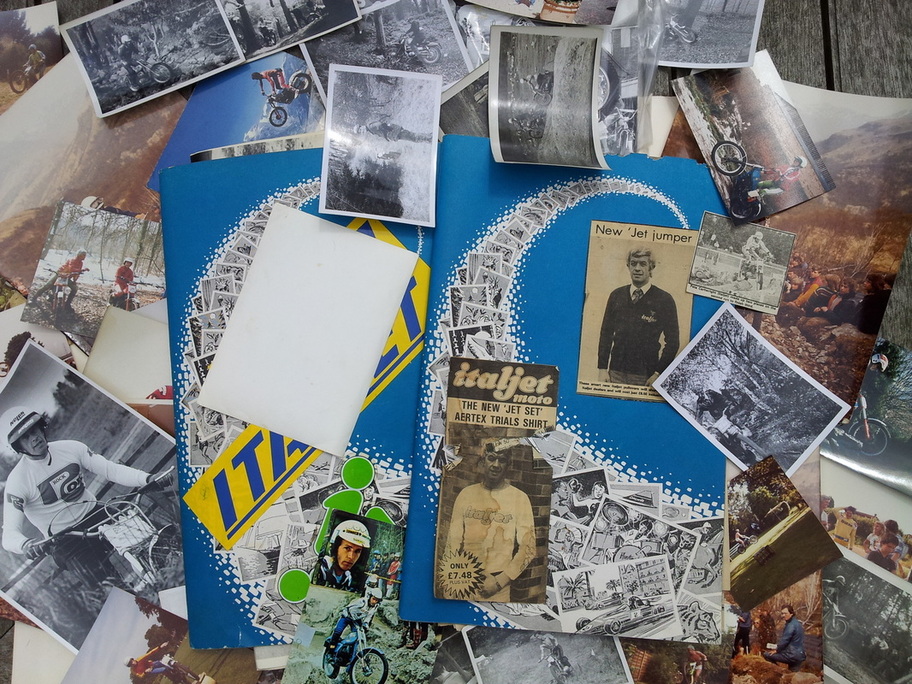 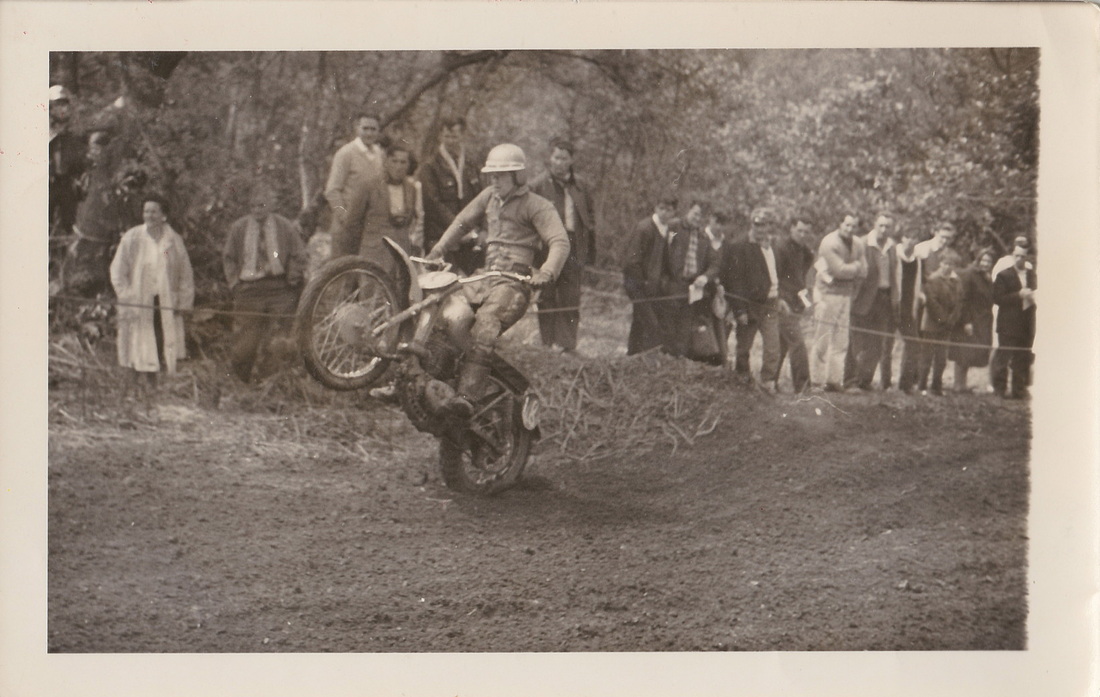 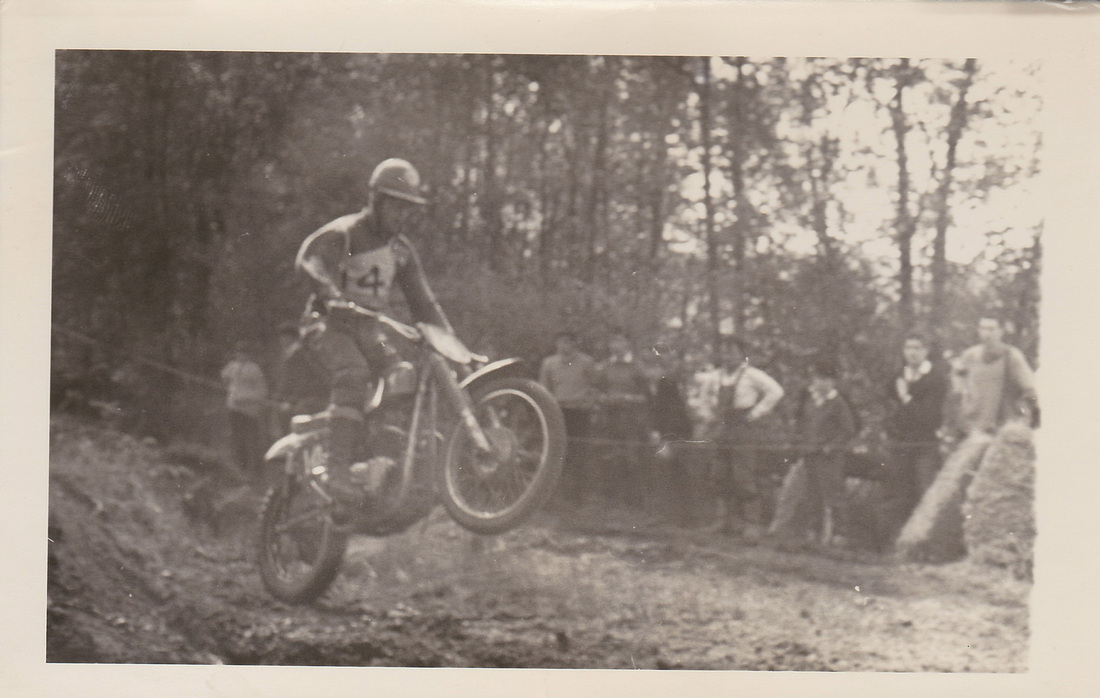 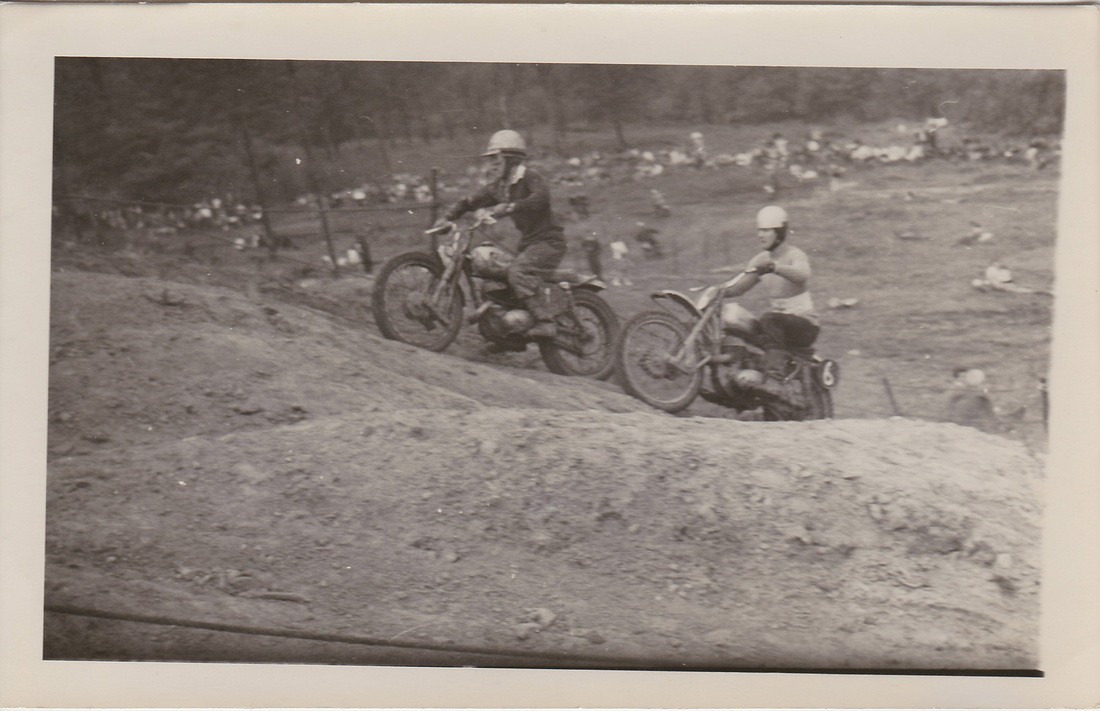 This photo is clearly Pete :) 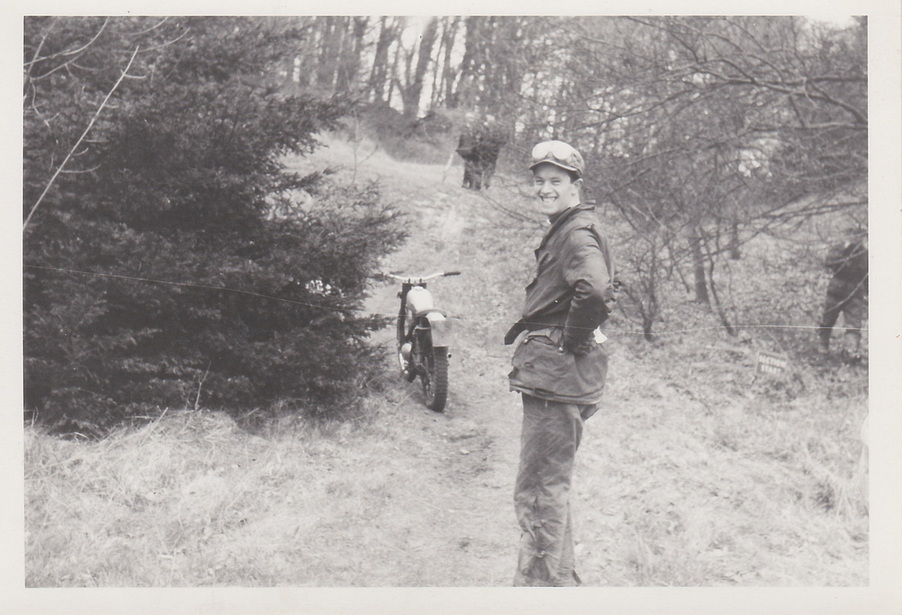 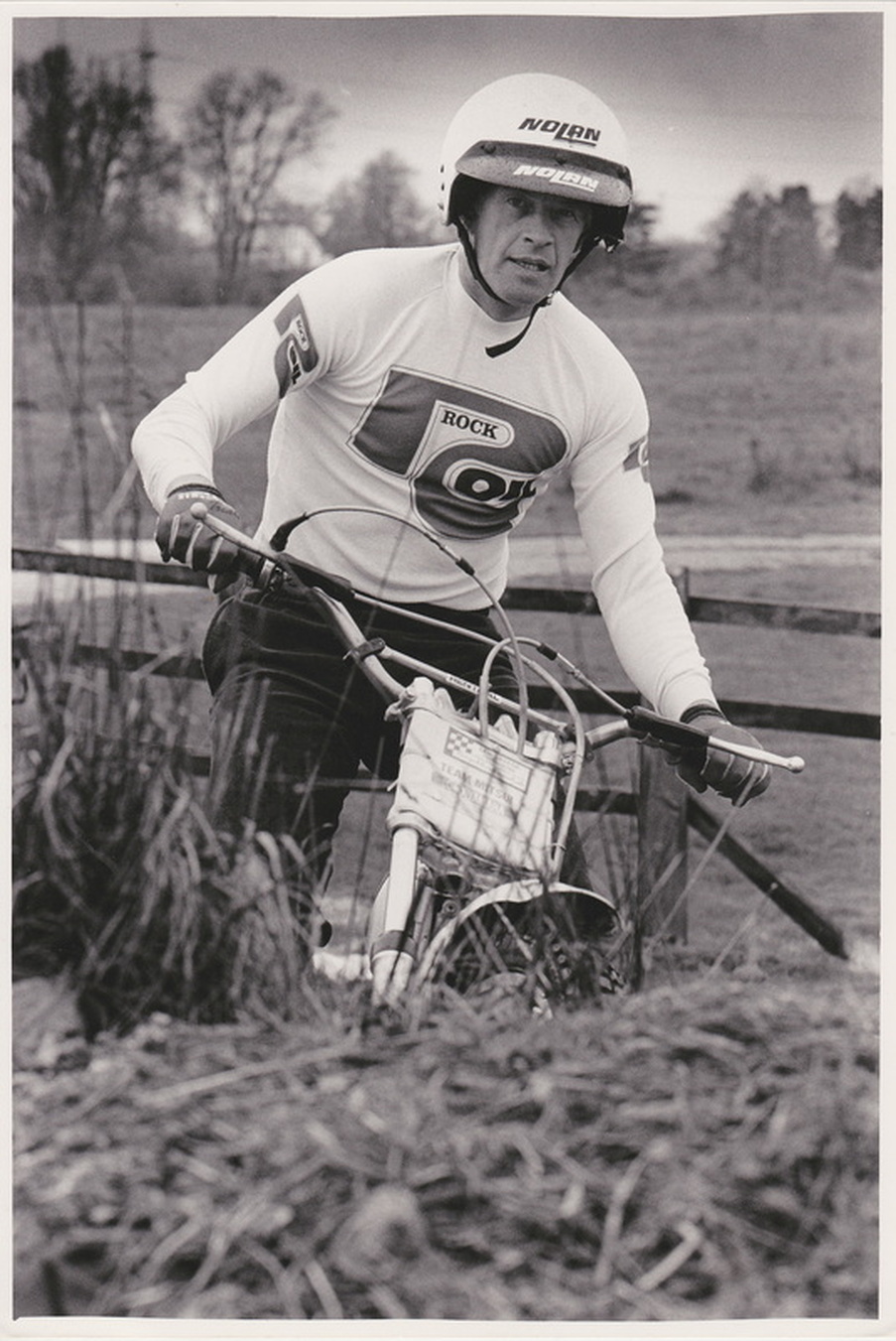 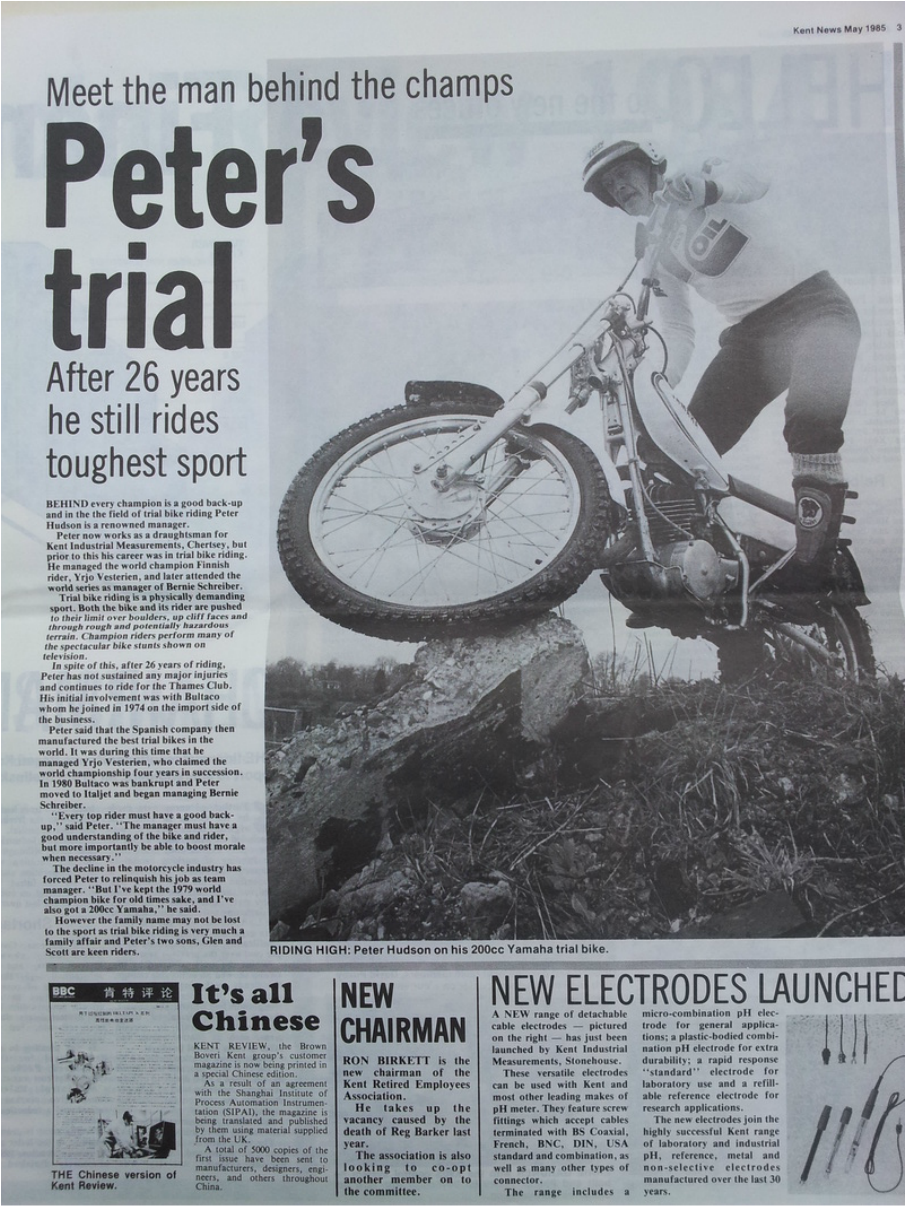 ﻿Pete messing around on both and Italjet and a Bultaco in his rear garden. I winder if they felt that different from one another.﻿
Can you name these three riders ?. 2 arnt so hard, but the third . Hmmmmm 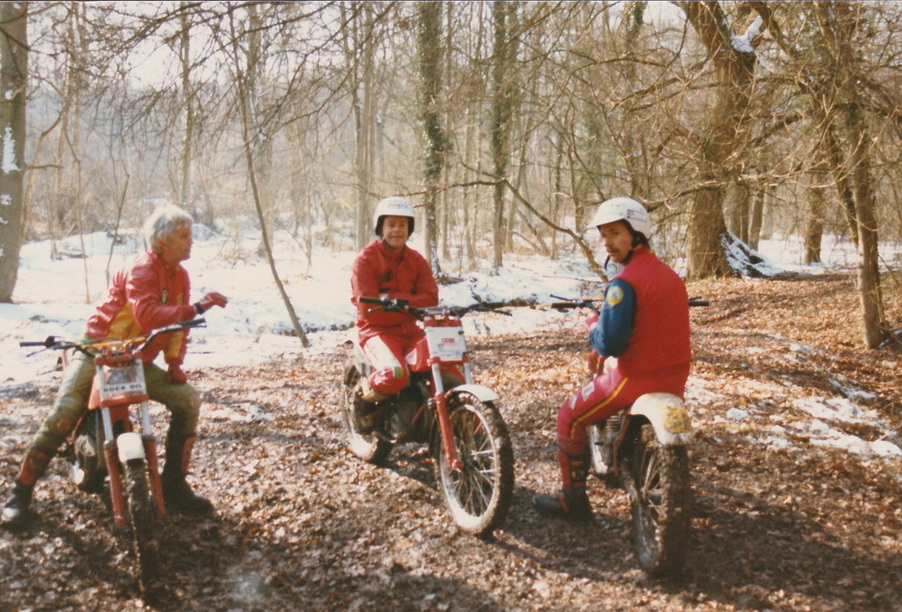