Alfer stopped production of motorcycles just after 2005. The factory was mothballed and shut.Francisco had , had enough of the industry.
In 2009 a local college contacted him for advice and his views of the development of an electric off road motorcycle.
Francisco explained that he was no longer a producer of motorcycles. The students and lecturers explained that Fransisco could help by lending them some factory space and lending them the "Alfer" name. Fransisco said "Yes anything , but not my time!".
The students set up in the main factory and started the production of this prototype motorcycle.
In Summer 2011 Fransisco the owner of the factory let it out to paying tenants which meant that the students had no home. Dont worry...the students were housed in another place by Fransisco nearby. He owns much property in the area. 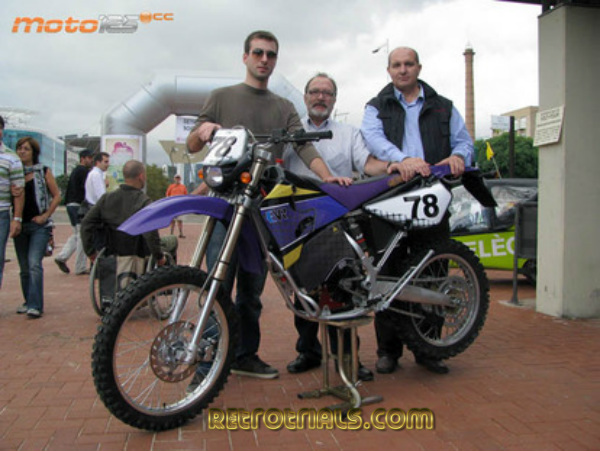 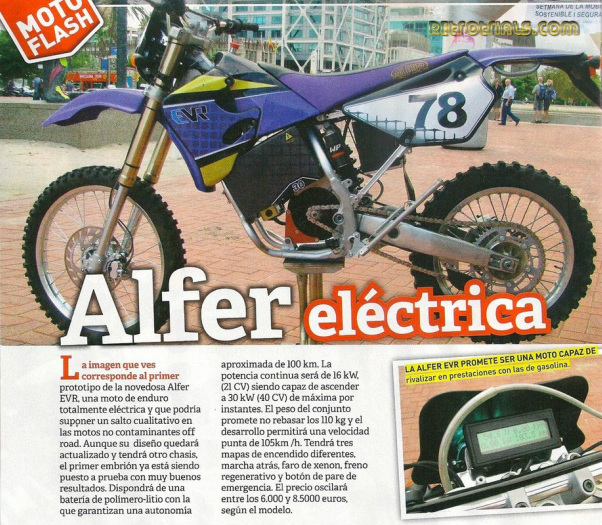 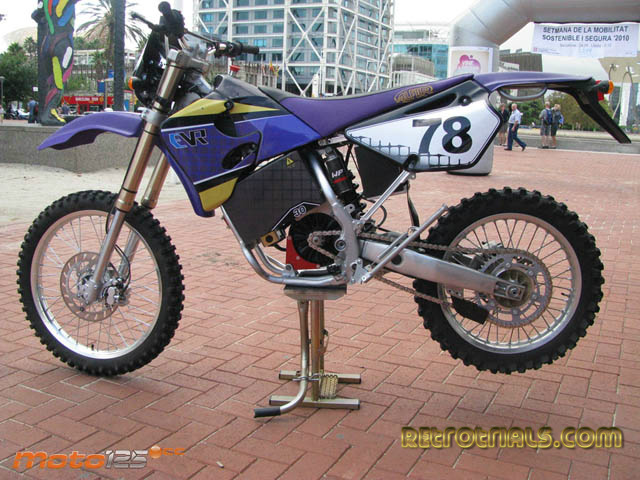 We had a long time without knowing anything about Alfer, a Spanish brand which dates back to a first prototype that was premiered in 1980, moving to mass production in 1982. His specialty was the enduro and supermotard models, and their last production focused on trails 125 cc 4-stroke engine Franco Morini air and six-speed gearbox.will now be back to talk about Alfer, because again Currently the bike through the front door. And do not exaggerate. In "Sustainable Mobility and Setmana of '2010 Segura i" in Barcelona, ​​was presented in partnership on Friday September 24 this electric enduro prototype. Quite an event for our industry, because it gets at the highest level of technology, along with models from the likes of Zero American, Swiss Quantya or future KTM of Austria. To show off. The prototype was based on the frame of the VR 250 enduro chassis unfolded birth alone, although we have already been announced that the final model used a cast aluminum dual beam, which will affect a very competitive weight (less of 110 kilos with batteries). The key is the weight of batteries which are lithium polymer battery with a capacity of 3 kWh, enough to provide a range of 90 ~ 100 km, but it all depends on driving style.Engine power is 16 kW (about 22 hp) with instantaneous peaks of 30 kW (40.8 hp). And above all, plenty of drive: 64 Nm of torque. And no gearbox or clutch: as easy as accelerating and braking. insist that this is an enduro and therefore developments allow a maximum speed of 105 km / h, enough for offroad driving. This compared to the competition version is also available as a commercial version with 11 kW (15 hp), so it can be conducted with the A1 or B cards, and with brilliant performance. The EVR Alfer has features to brag about: variable regenerative braking (on the left lever) that retrieves a 8.8% energy, reverse with acoustic signal, digital multifunction instrumentation, three maps use different version supermotard and xenon lighting and LEDs. It is premature to advance prices, but also aims Alfer be very competitive with the retail version of 15 hp, priced at around € 6,000. Further work on it and if all goes well, will be on sale within a year. Congratulations Alfer. 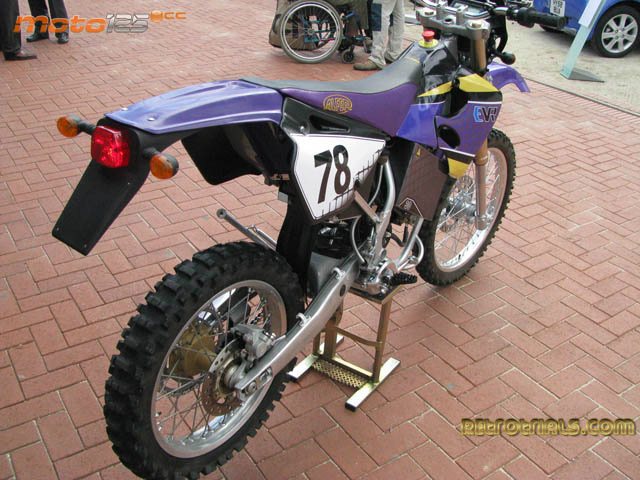 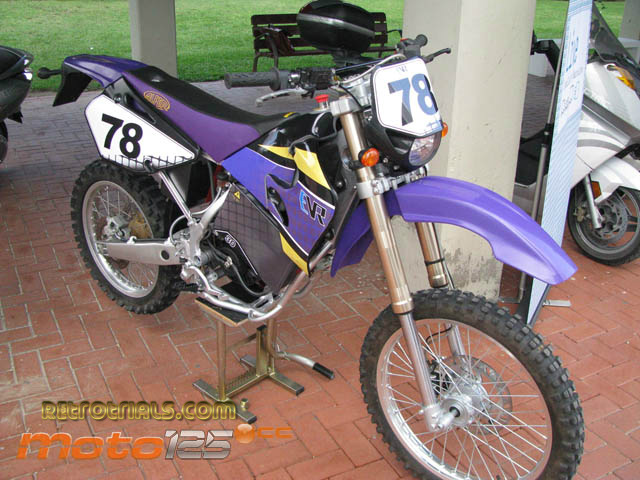 The EVR Alfer hardly differs from a conventional enduro. The frame and plastics are those of the VR 250, although the final model will have a double-beamed aluminum chassis. 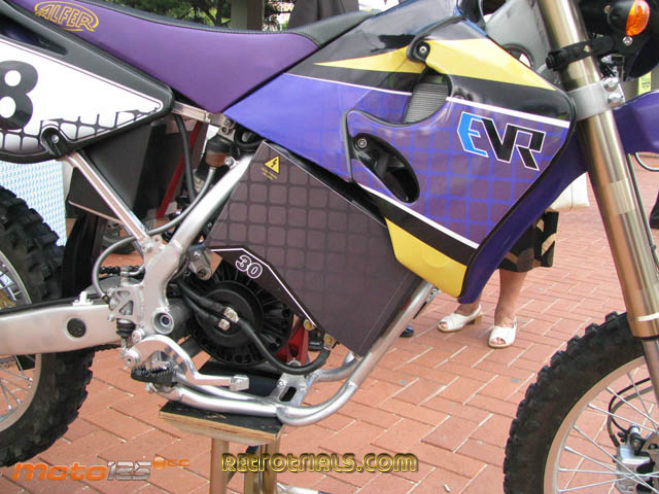 The engine promises not to disappoint in terms of power with peaks of 41 hp at the height of a 250 cc 4-stroke competition. But above all, with a torque of 64 Nm bestial. 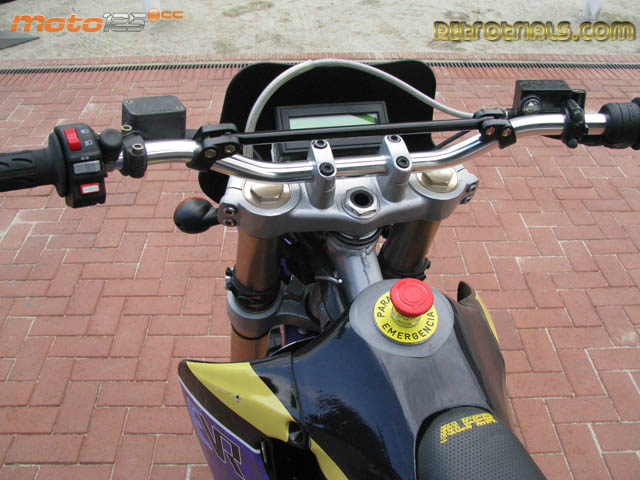 The left lever is a titratable regenerative braking that will use the engine braking to recharge the battery. The button next to the pineapple, controls the board, and the "plug" the "tank" circuit breaker does. 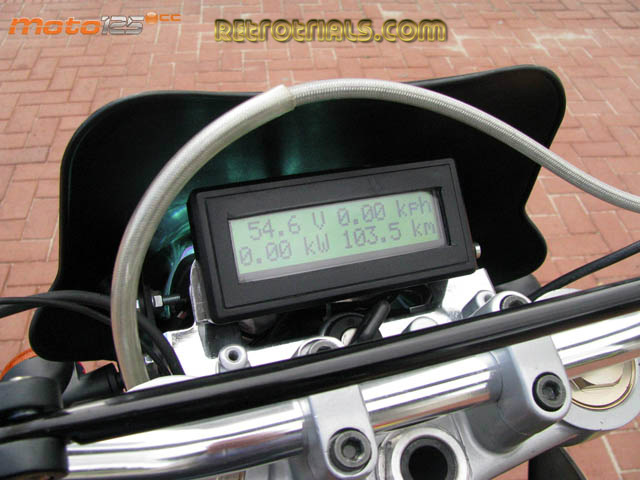 The prototype displays information on several screens: they see in the picture indicates the battery voltage, instantaneous speed, power available (such as a dyno in real time) and tote kilometers. 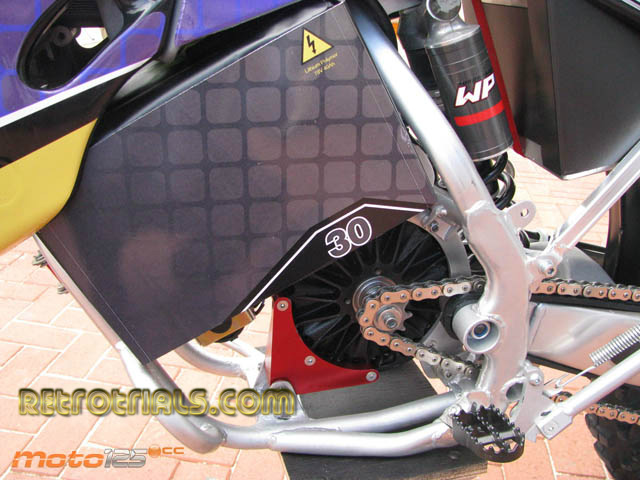 The batteries are lithium polymer battery, the very best you can find, providing good load capacity and low weight. There will be a version with 11 kW motor that can lead to A1 or B license