Who was your favourite rider to work with ?

In road race Busquet and Jose Cierra. In the motocross Pedro Pi. 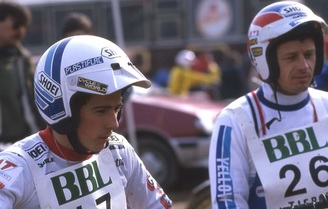 Interview Montesa trial mechanic Paco Mateo www.retrotrials.com photo Eric Lejeune
What were the Lejeune like to work with ?

They are all very good persons . Eddy is very normal and is like everyone. He was the best rider I see of any of my riders .His brother Eric is crazy ha ha ha .I remember this . Nice man.

One time I go Belgium to a town neat Vervier and go to the bank to change 40,000 pecetas to Belgium franks and the bank tell me 400,000. The boy at the bank no give me 40,000 pecetas of franks. They give me 400,000 of Belgium franks. They’re crazy, they make big mistake and I go back to the hotel and discover this. All the people at the hotel , Amos , Tarres  go ohhhh ohhhh we can have big party tonight . I have to go back to the bank and tell them. 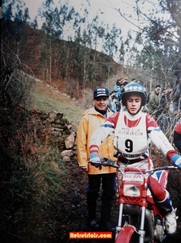 Did you ever help rides from other makes of bikes ?

Yes ..oh yes. When Amos ride Beta he come to me and say “Paco help me with my bike. I have problem”. So I help Amos because I am good friends with him and his father.

Amos aged 17 enters a section under the watchful eye of his father
Did the riders every snap the swinging arms and you had to make big repairs in the middle of the competition ?
Yes, in the 24hrs Monjuic many many I go to this race . One year many pistons get holes in them. It is not possible to change the piston. There were many inspectors so you could not change things like pistons ……but the engines are hot so we take apart to see the problem and I cover the area with a cloth . When the inspectors are not looking we remove the hole piston and drop it quickly in the gasoline tank and put another good in the bike. 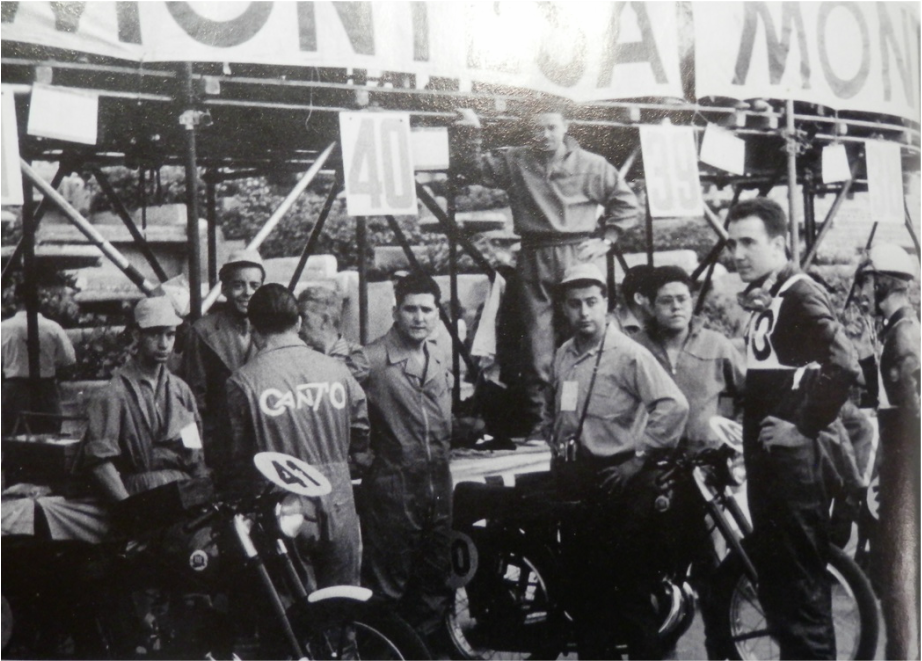 Interview Montesa trial mechanic Paco Mateo www.retrotrials.com photo montesa
Another year we change the crankshaft and gearbox. We take the car and go to Esplugues and find the part . We then rush back to the circuit and fit the parts again and go back into the race. I remember one race when the bike loose power suddenly. The flywheel no stay in the correct position and we assemble new key in the bike in 5 minutes and the bikes is go again and wins the race. Busy times.

What was you most favourite time working for Montesa ? 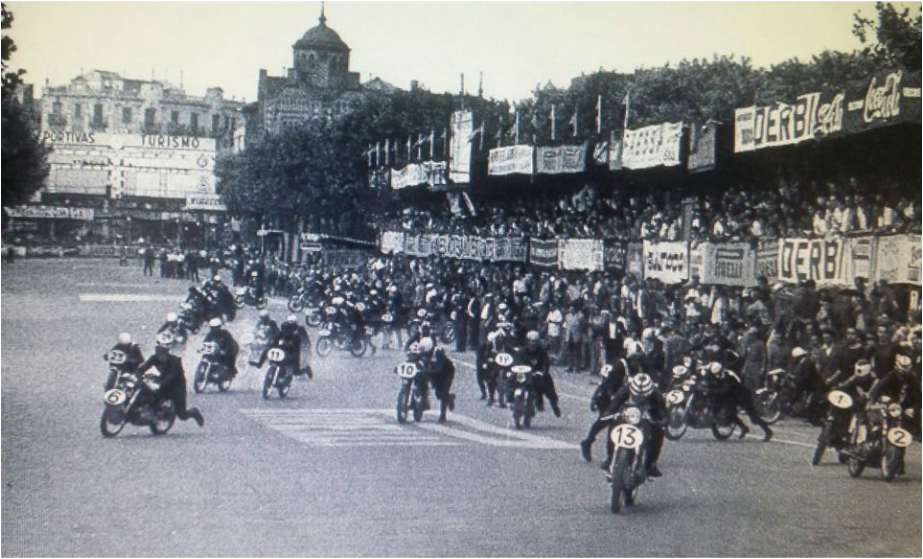 Interview Montesa trial mechanic Paco Mateo www.retrotrials.com photo montesa
In 1968  because I live in Los Angeles and I see all the states of America. I also go to Honaloolo with my pilot. In 1968 to do all of this is very difficult and we are driving all of the time. When I go to USA at this time I no speak English but I learn.

Did you ever go to the Scottish  Six Days trial ?

You know the six days trial is a long time and there are always other races happening and we have to go these races for the championship. The 6 days is not a big race. Other races are more important.
1982 and Honda takes control of Montesa

Because the Japanese people all change everything and it just becomes to much so I leave the trial.


Political change within Spain, industrial disputes and no government protection, coupled with increased competition from Japan, forced many Spanish motorcycle companies to close. Montesa had already invested heavily in its mechanisation and was without doubt far more organised as an organisation and factory than it's competitors. Due to these problems, production ceased for months and the cash flow stopped. In 1982 they had no option other than to sell the company to Honda who saw Montesa as a solid expansion further into the on road motorcycle market.
Paco left Montesa in 1999 and retired. He had worked his entire life for Montesa, from 1957 to 1999. 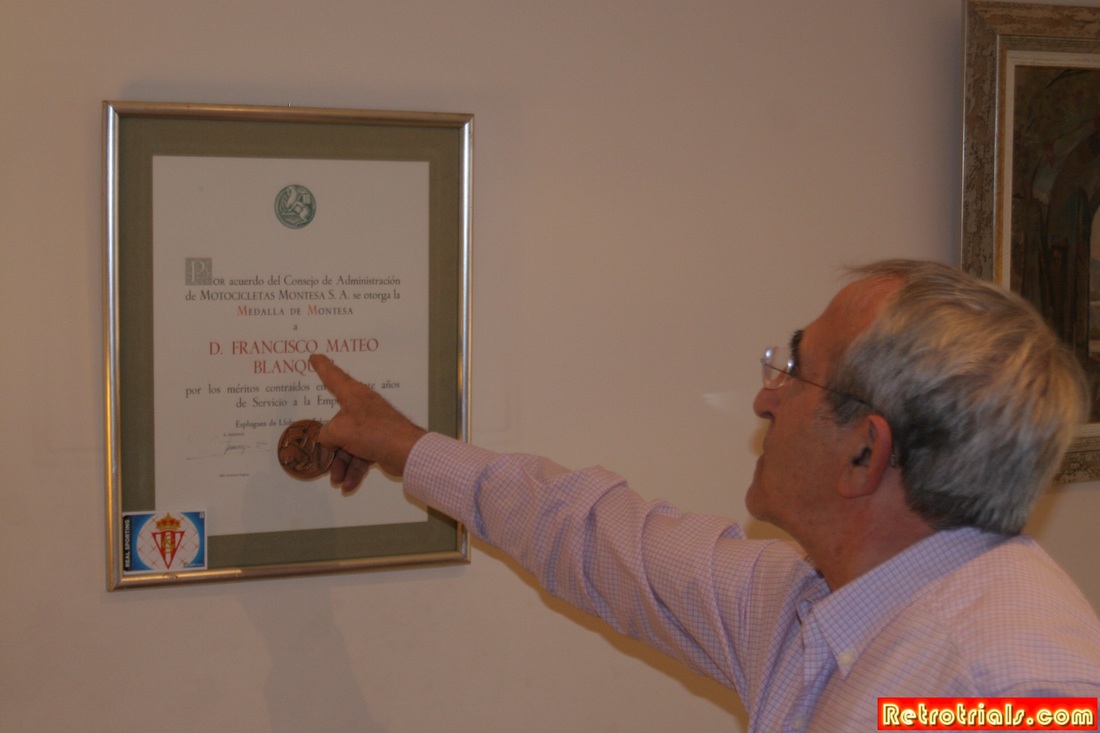 Interview Montesa trial mechanic Paco Mateo www.retrotrials.com photo montesa
Wearing just sandles in the paddock, Paco's favourite time was working for GP racer 3 times Spanish Champion and  24 Hours of Montjuic winner Josep Busquets.
Paco recieved this special Montesa medal for his service
No more. My back , many problems. One times from Ireland I had serious problem with my back and I could not move. I have a house in the mountains and another place in Barcelona. My friend Xavi has Impala number one. I have many people who ask me to prepare their Impala for them…but this bike is the number one.
Retrotrials visited a secret private collection consisting of a thousands motorcycles. It included the very bike that Paco explains. The prototype of the first production Montesa ever. 2 crosses are marked on the tank as the brand of the marque was at this time undecided. 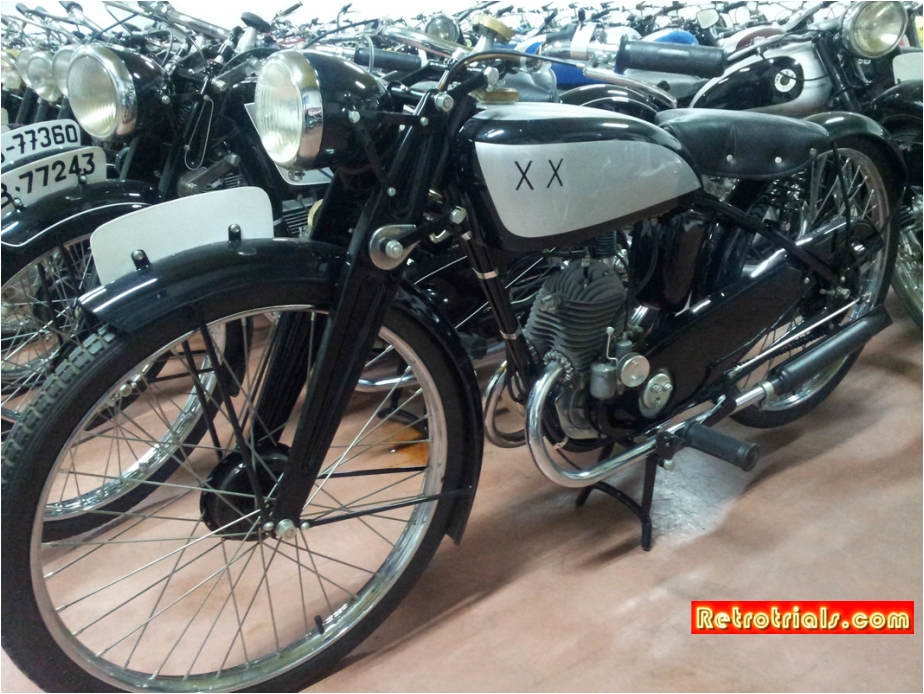 Interview Montesa trial mechanic Paco Mateo www.retrotrials.com photo montesa
It is only recently that I come here. I prepare many bikes for Montesa , including the Montesa Impala for the president of Honda Japan. This was the original old Impala. Josep Cirera  my boss say that the Japan president of Honda wanted to take an Impala to Japan. Please can you prepare the bike for him to take . I also am asked by Jordi Permanyer to prepare one Impala for an exhibition in Barcelona.

It is not everyone who is asked to prepare a motorcycle for the President of Honda. 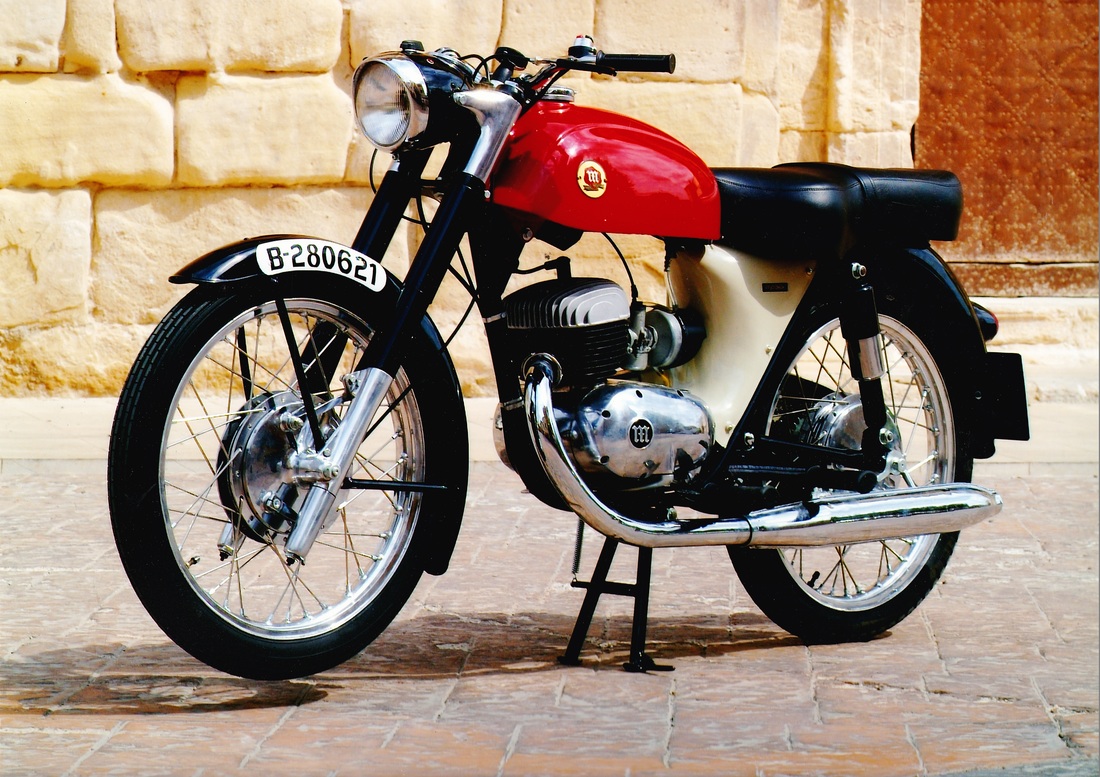