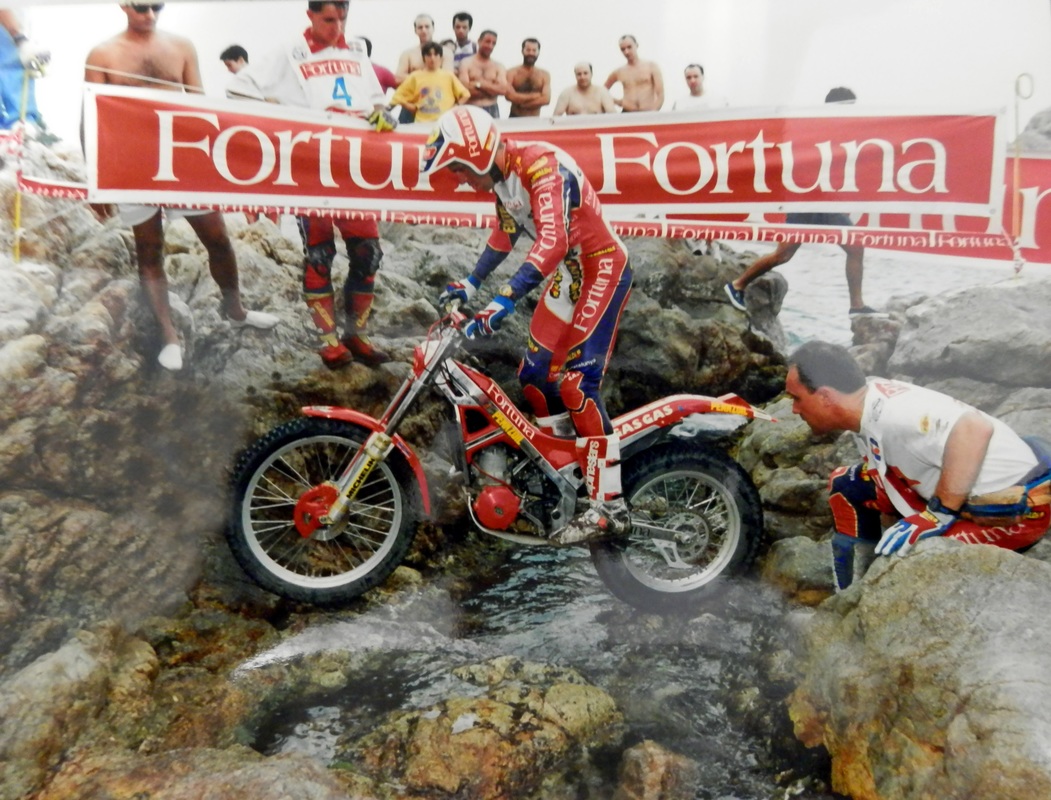 Exclusive interview with Salva Garcia - Minder to Tarres, Colomer and Bilbao www.retrotrials.com
What was your relationship like with Jordi ?

Jordi demands 300% from himself at all times and from everyone. For me this relationship was perfect, no problem. He was very strict. I have enough stories to stop a train. He is very strict (Jordi) but sometimes he flagged and I had to push him. The only thing is how do you explain all of this?
﻿The good old days when wigs were in fashion :)

Exclusive interview with Salva Garcia - Minder to Tarres, Colomer and Bilbao www.retrotrials.com
Salva looks at one of his favourite photos. The same photo can be seen on the wall of Jordi's garage.
After a very muddy 1993 Belgium World round at Bilstain ...which of course Jordi won. 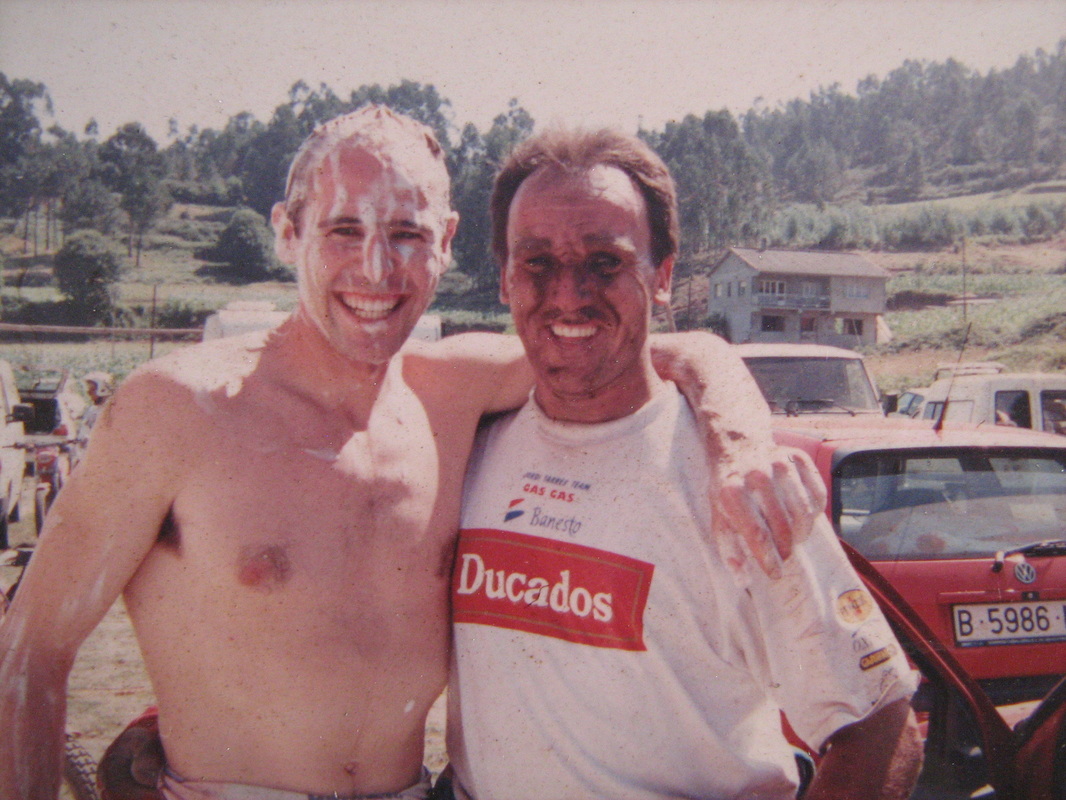 Exclusive interview with Salva Garcia - Minder to Tarres, Colomer and Bilbao www.retrotrials.com
You worked with Amos and then you worked with Jordi ? Did you have to change a lot ?

No, not much. It was different work but not many change because with Amos many time in the morning he would be asleep with the music from the night before and I would go to Amos and I would wake him and say we must go practise and must work to get better. With Jordi I go to his home at 8 in the morning and at this time he was up already and already riding the bike and testing the new parts on the bike...every time. He was very very very moitvated. He was totally different.
Did Jordi expect a lot more from you that Amos expected from you ?

I think, my thought is Jordi was very demanding. Let’s see, I think Jordi saw my work. I was the first person to look after a rider seriously, up to then there were people, mechanics, that would accompany riders. But to have a person spend a whole day in the mountain with them, I am probably the first person that actually did that. Jordi probably saw what I did with Amos, he lost his title, he had always had his brother but sometimes amongst brothers things die. I think that he saw in me someone that could help him reorganize himself and I think it was like this and it was demonstrated.
Salva minds for Jordi Tarres. Team GasGas in addition to Spanish Federation members.
Did you live at any time in Rellinars ?

No, in San Forts always with my mother and father. I travel there every day. It was 35 minutes from my home to the house of Jordi.

When Jordi practised, who was the mechanic for Jordi ?

When Jordi was at his home practising and testing I was the mechanic, the minder and all for Jordi. I was fully responsible for Jordi. I took care of everything, with the relation with his brother, his woman, the factory, the mechanic, Paxau, organisation, the diary.

So you cooked the food for Jordi also ?

Riders and their minders with orange bibs wait to start the 1993 Hurst cup, which is the Irish round of the World Trials championship. Marc Colomer can be seen behind on the prototype Beta, whilst his minder is on the Beta Gara. 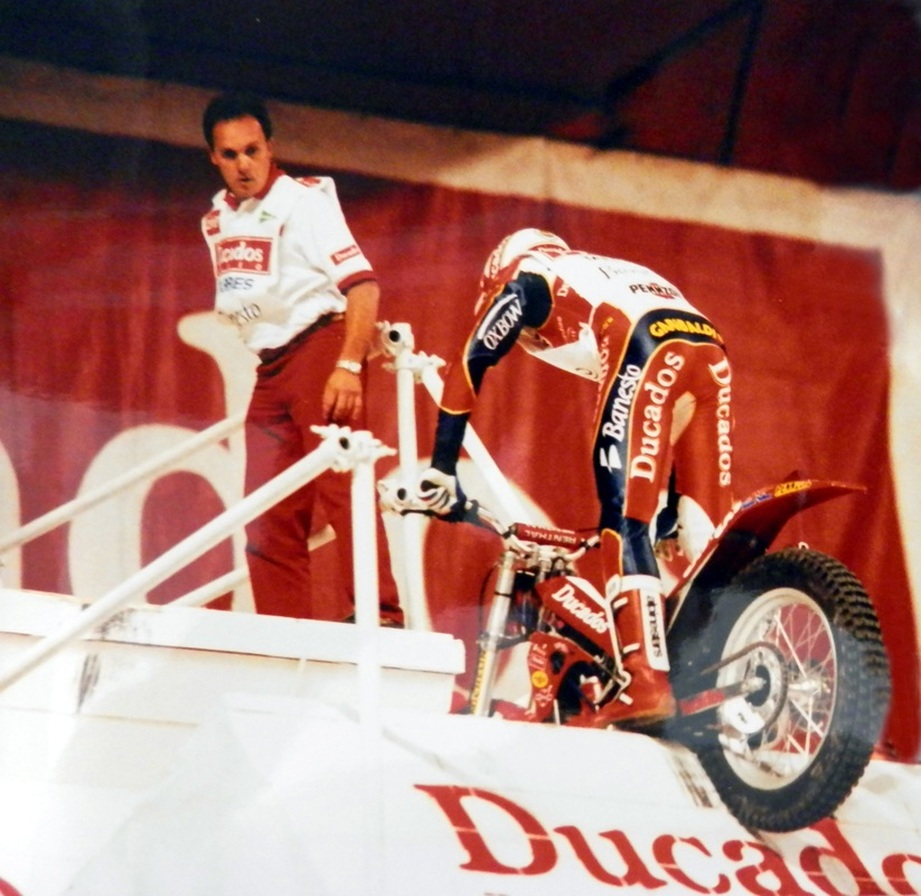