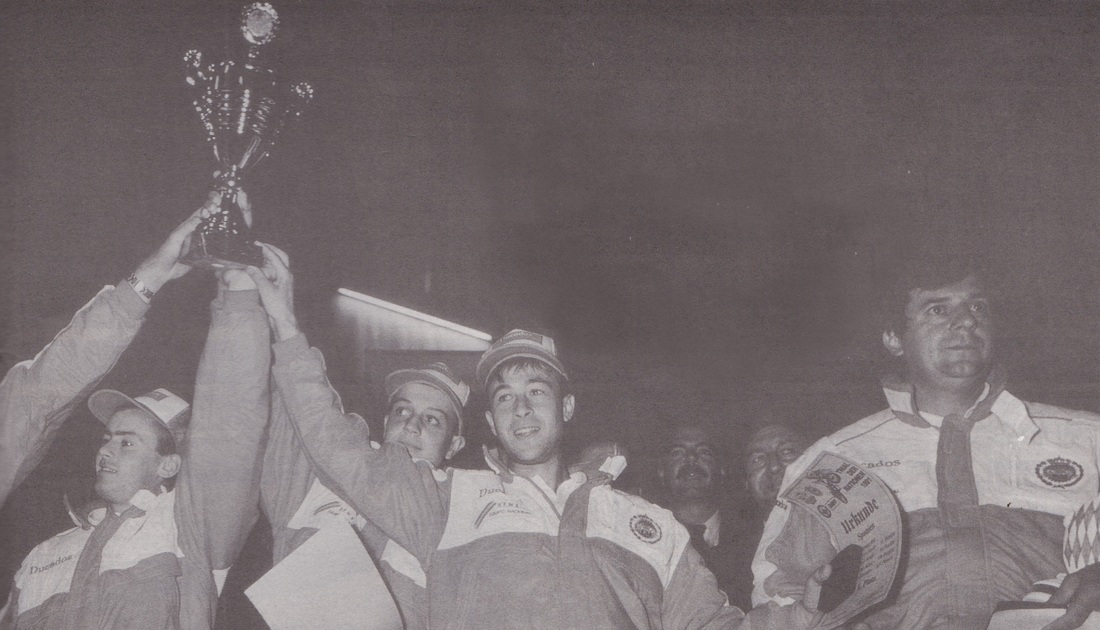 WWW.RETROTRIALS.COM Gabino Renales Interview photo Trial Journal
Gabino Represented Spain in a total of 6 Trial des Nation events and was present in the winning team twice in both Belgium (1989) and Germany (1991).
The 1990 Spanish TDN team of Gabino Renales, Amos Bilbao, Jordi Tarres and Andreu Codina.
Marc Colomer was there to watch and learn.
Why did you leave trials?

After finished my career as a trials rider, then I started to work with the company that was working on the indoor trial. The name was Eddidos. They were the organisers and we bought the rights from the FIM for the Indoor Trials and we were responsible for organising the Indoor Trial World Championship. We also create the Indoor Spanish Trials Championship. Then we decide to buy the rights for the Trials World Championship and then I was very excited to start a new project on the World of Trial races. I had a new concept and a new plan in order to bring the trial to the spectators. It was a concept to concentrate the last part of the competition. This would be a small area of 4 or 5 sections where the top 5 riders after a big lap and a normal trial fight for the victory in front of the people and in front of the TV cameras. I tried to somehow to professionalise and commercialise the trials on TV to make them more popular to bring more sponsors. That was my personal idea. I tried to put this together with the factories. As you said before you are never alone and we faced the reluctance of the FIM and the International Federation. This concept, my company would have been responsible to select the organisers of the events. In the end you realise that the organisers, the race organisers are the National Federation.
The 1990 Montesa 310 being unveiled at the Barcelona motorcycle show.
The National Federations get the authorisation to run the events via the International Federation. Normally the criteria for appointment for one event and one country is not necessarily linked to the sponsors but sometimes it goes into the politics and the favours because in the end the International Federation somehow are a political organisation and influenced this way. So this year when we started to somehow fight with the FIM, then at this time in order to support my concept and also obviously the concept of the company I was working for, we needed to get the support from the group of factories. The factories were never united. Beta, Gasgas and Montesa they started to move around so there was not unity. At this point I say alright I have an idea that I am not managing top put in place probably if you have an idea that you do not manage to put in place then probably it is not a good idea. Some people gave me support on a private basis but then in public they no say the same things. Then I said I have another opportunity inside the sports marketing industry which was with beach soccer and something related to football and then I decide to move because I thought that my time in trials was over.
Today Gabino is the General Manager of Beach Soccer Worldwide.
It makes you wonder what he could have done with organisation of trials if he had managed to gain control.
Gabino rode for Montesa from 1988 until his professional Trials riding career ended in 1991, riding a wide variety of their machines in his time.
This was in 2002. Also my friends were in trials, my passion was trials, my job was trials my sport was in trials and the upset was a bit too much. Then I said I have some ideas that I think will work. Everybody was talking we need to improve trials and it was this time I started with this project.

Were you one of the bosses of the company?

No, I was an employee of this trial company.

You were also a minder for Colomer?
Yes, because I am a very good friend of him, so I help him.

Who from the World of trial are you still in touch with?

Marc Colomer but that it all.
As you will have noticed already Gabino was sponsored by the 1970 Puch and Ossa Trial rider Fransisco Paya. When I visited Francisco hanging on the walls were these photos and thank you's from Gabino, for his help.
Thank you to Paya. 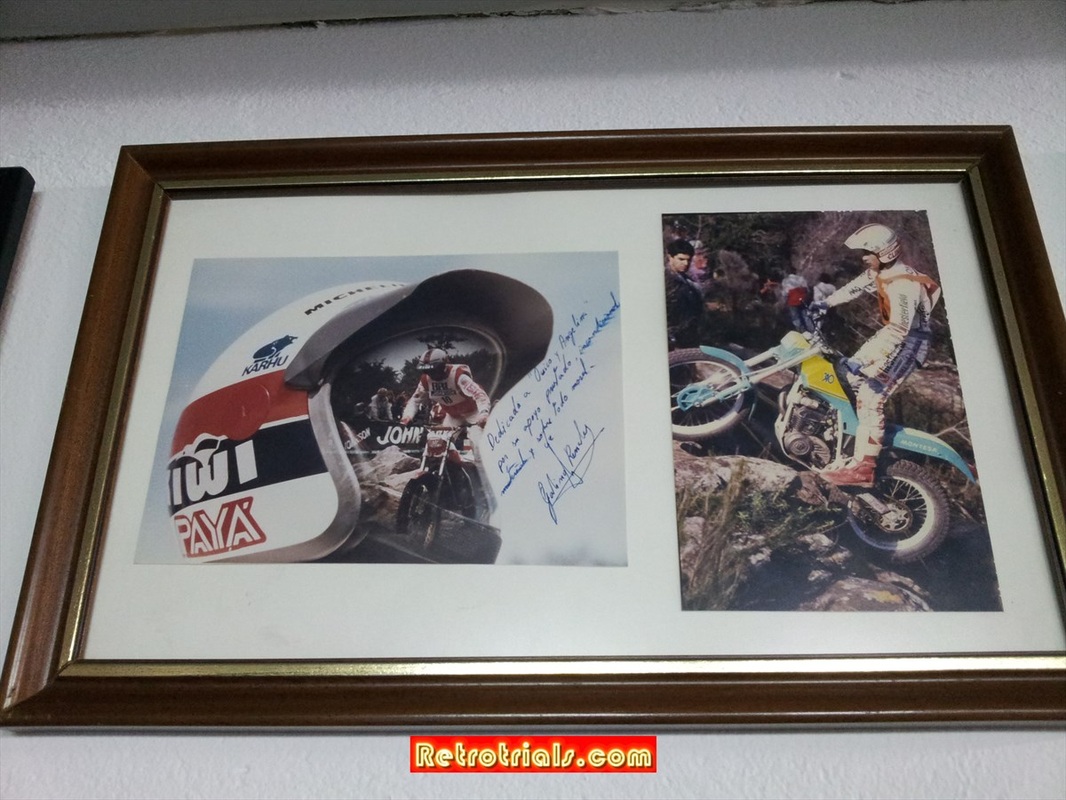