Yes, my first trial in Spain was in San Llorens and this was a round of the European Championship. I start the trial as number 1 ha ha and I was so young and I was not so good ha ha. With number 1 there was so much pressure, many crashes. Ha ha ha ha.
After you had ridden a few events your results started to get a lot better

Yes, I started to ride Montesa and I was a testing rider and I help Paya and he was number 1 and I was number 2. His nick name was Quico Paya ha ha and I repair my bike and his bike and I was riding to help Paya at the start with Montesa. In a few time I start to go up up up ha ha.
Spanish Championship contender Francisco Paya rode for Montesa in 1974 after switching from the OSSA factory. He went on to ride with SWM and Puch finishing his career to concentrate on his own motorcycle shop and small factory which in 1986 started production of the striking JP 325 TR . 99 of these were made until production stopped in 1988 due to spiraling costs and an advancing competition.
Did you help to develop the Montesa?

Which Montesa did you start riding? Was it the 349?

No no before ha ha. I start in Montesa with the 247 and just after a half year we start to work with the 348 with Malcolm Rathmell
Did you spend a lot of time at the factory with Pere Pi?

Yes I worked there and I test all the different things. They make development and I test for this department. After I say ok Malcolm can try. If I say not, nothing happen with this change.

In a normal working week of 5 days how many days would you spend at the Montesa factory?
Thank you to Canadian Rider Bill Sparks for these unique photos. Here are a few words from Bill -


The Montesa pictures I promised, it was February 1981, I had just ridden the Spanish world round and my Montesa had engine problems during the event so I never finished. I will back up a little, I think it was every trials riders dream to come to the UK and ride at the time. So my dream was to ride the first four world rounds and the SSDT. The plan was to get an Italjet from Peter Hudson but that never turned out so Mark Kemp down at BVM got me sorted out with a Montesa. I had bought a used van to use for my travels and hooked up with Chris Myers and Peter Cartwright who were riding Italjet at the time, so the three of us traveled to Spain and Belgium together for the first two world rounds. With traveling with Pete and Chris we always hung out with Martin, Malcolm, John Lampkin, Chris Sutton and maybe a few more. These photos are from Bill. Thanks.
In 1981 Bill arrived at the dusty Montesa factory 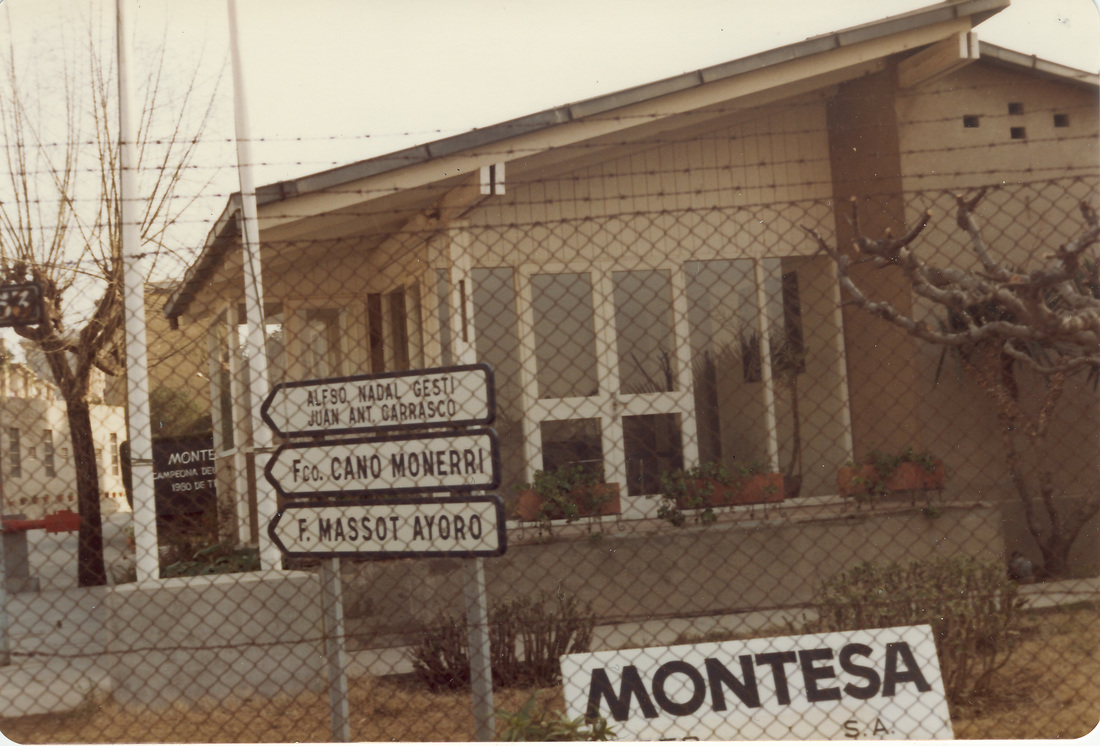 They were all so good to me and always helping me out when they could. We were all staying at the same hotel in Spain, the next day after the event Malcolm took us to the Factory so I could fix my bike.So in the first picture the white building I think was the competition department and Malcolm went in to this building to get the parts I needed, ignition maybe points,and help me put the bike back together and then Chris and Pete and I were off to Belgium for next weekend round.I think I broke a gear shift in Belgium finished in Ireland broke a foot peg in England but got a special first class at the SSDT so I was happy with that.It was great experience one I have never forgotten,wished I could have ridden better at the world rounds but was little to hard for me at the time. Hope the pictures are some use to you  I think they were all taken by my van from about the same spot I did go into the competition department with Malcolm but did not get any pictures. 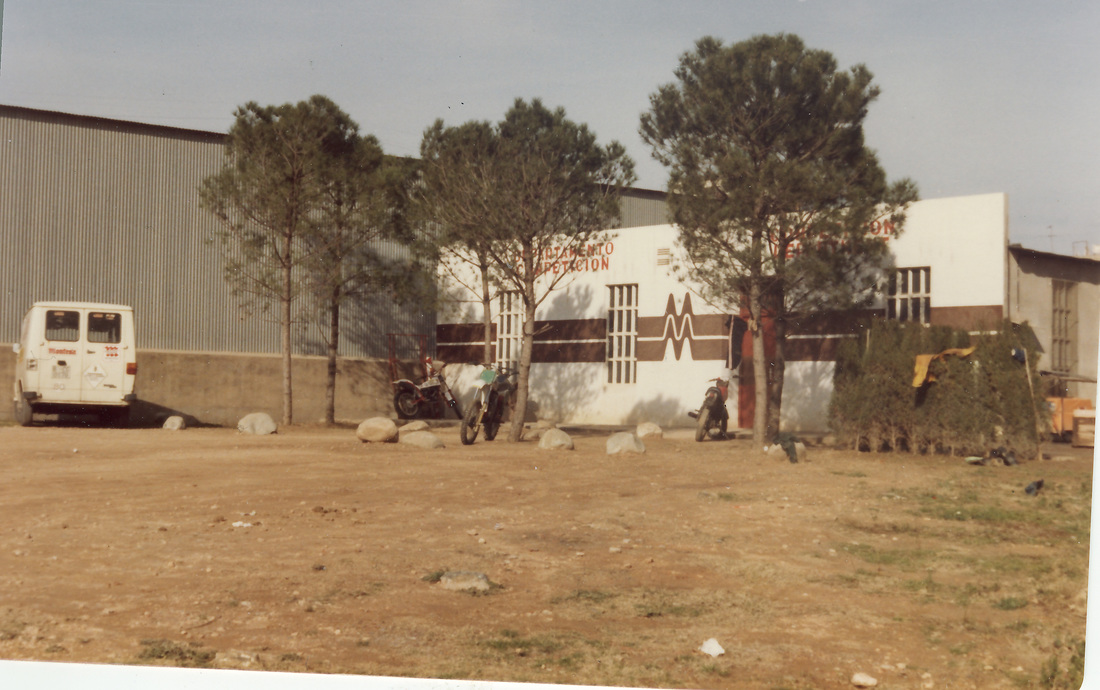 The rear of the main factory 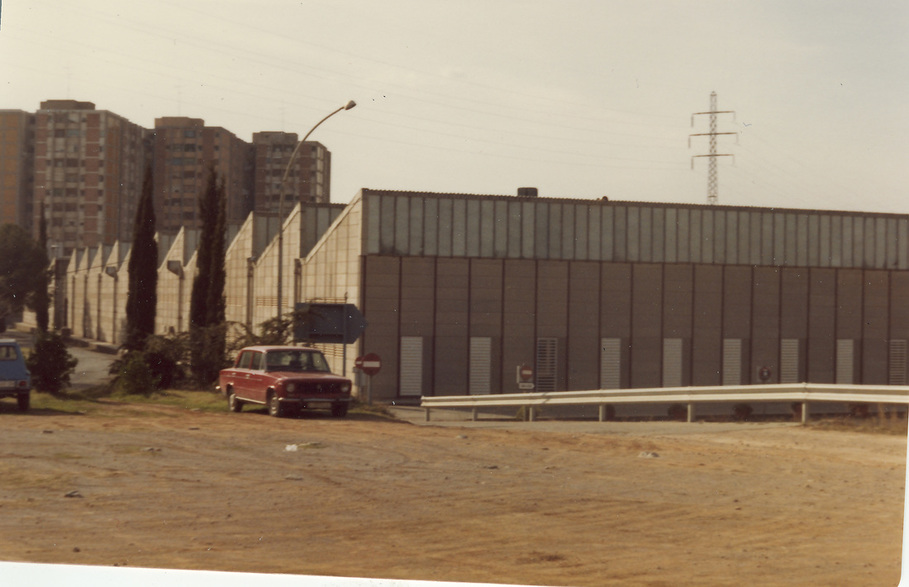 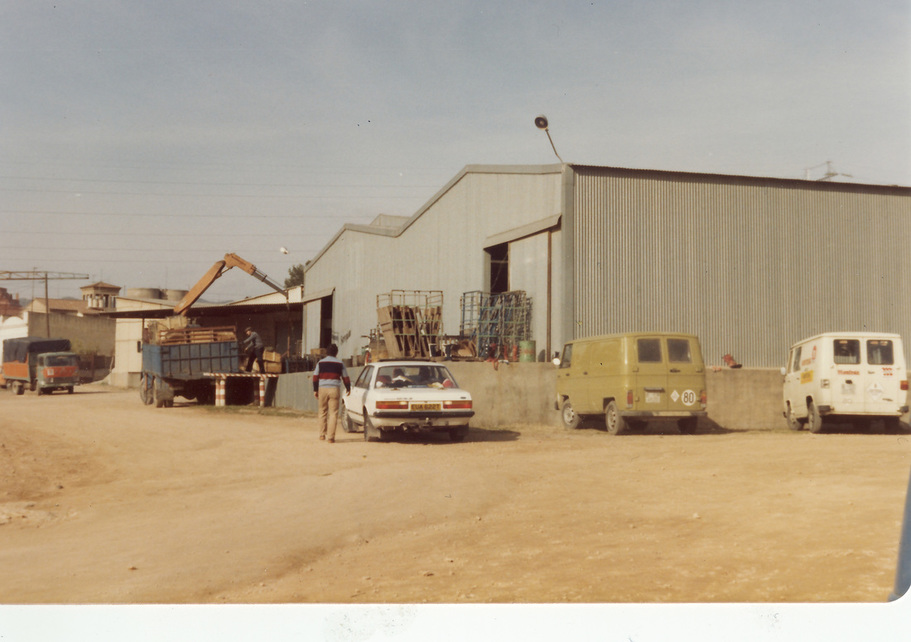 To the left of the factory the production bikes await shipment 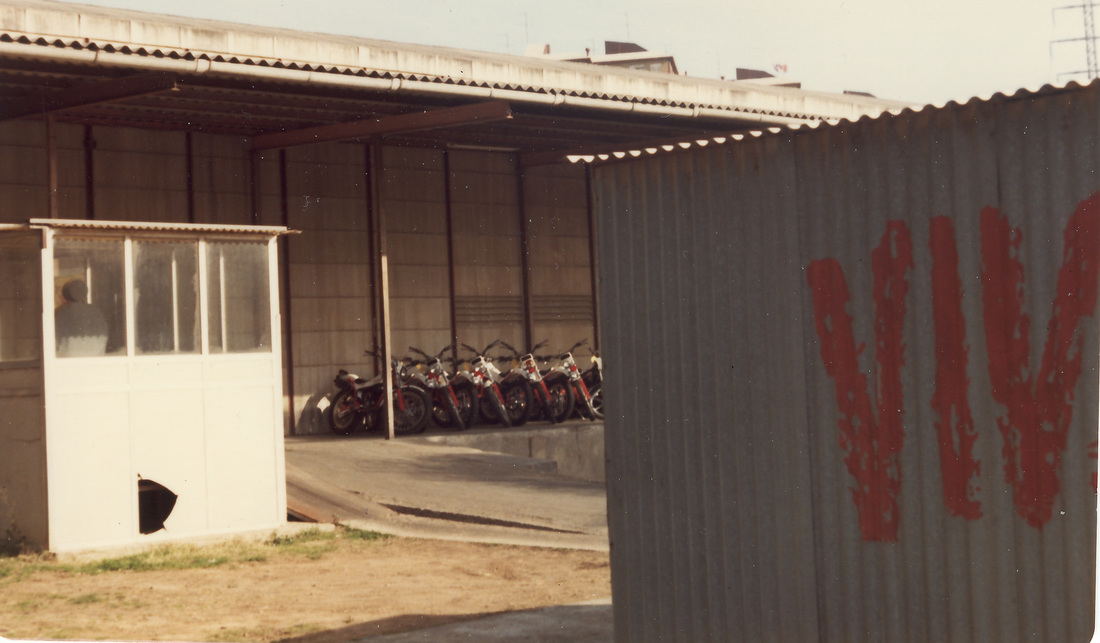 Much earlier than Bill's photos. Here is an early 1970's photo of the Montesa Esplugues factory with the gate house area at the top of the photo. 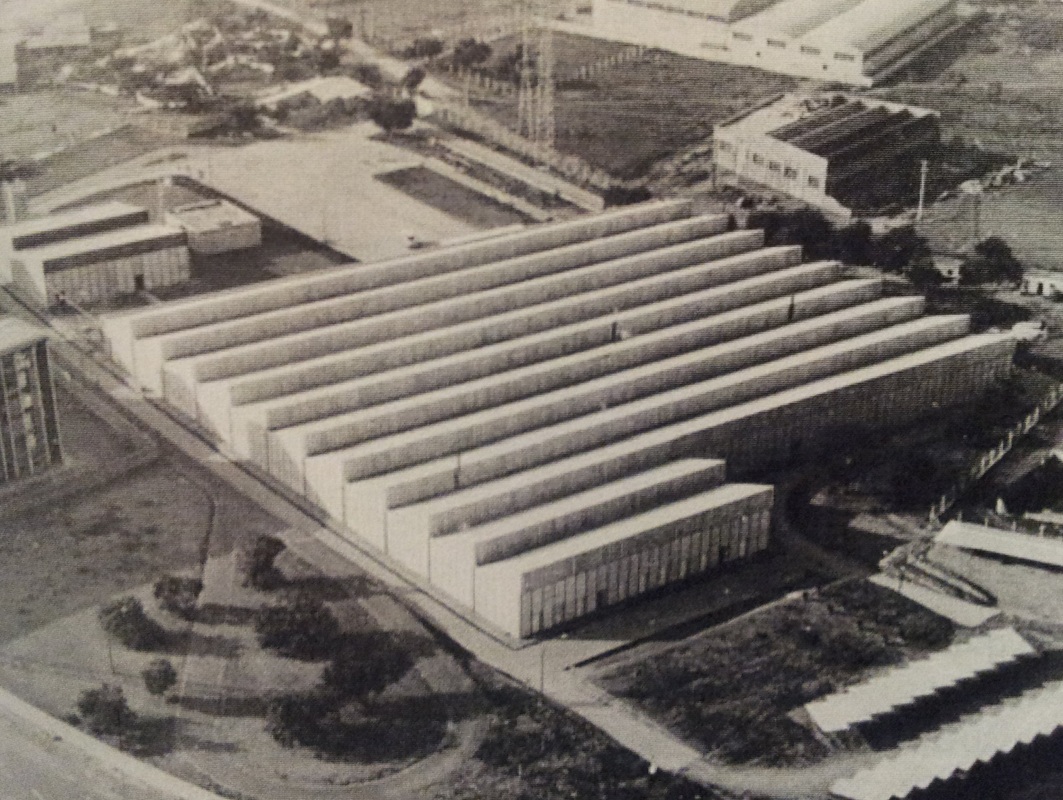 2015 Exclusive Jaime Subira career Interview www.retrotrials.com
Normally 3 or 4, sometime I got there in the morning and make some things on the bike and I go out to test this and I come again to the factory or to my home so it was not just work at the factory.

Did you ride the section at the factory in the car park?

What was it like?
An overview of the Montesa Esplugues factory site. The remains of the factory in this photo are smaller than existed during production. You can see the original size of the factory by looking at the lighter coloured concrete around the "main factory + production lines" working. 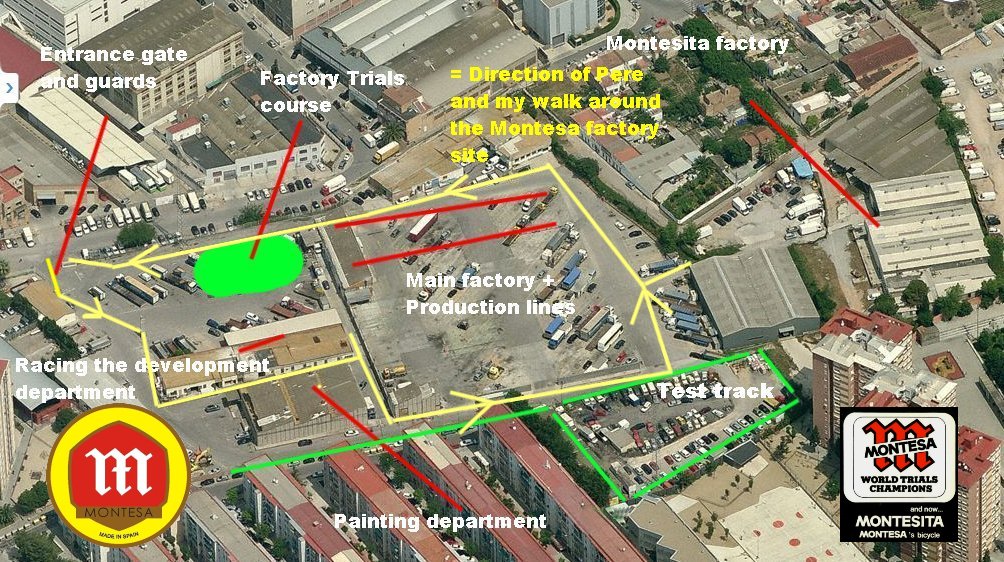 2015 Exclusive Jaime Subira career Interview www.retrotrials.com
Ha ha, it was a small section but I test a little bit the bikes here. Near there at this time you can go somewhere to test the bikes. Now at this time you have to travel 40 kilometers to test bike but then was only 3 or 4 kilometers for the testing. There was someplace for trials bikes.

What was Montesa like to work for? Was it a good place to work? Were they very tough? Did they make you work very hard?

Yes, it was a good place to work. You know, the problem for me, the big difference between Montesa and Bultaco, Bultaco it was a family that I’ve for racing they have a very good team, mechanics and technician persons. Very good team. Montesa was a factory that make the races to sell the bikes. The racing department works for production that to win the next bike and to place this bike in production with no problems. They are more there for production than for the races.