A detailed interview with Oriol Puig Bulto + full access to his photo gallery and Trial records.
What was the name of the textile factory that your parents had ?

​It was called Puig Font sa. My Grandfather was Ramon Puig Font.

What was your relationship like with that your Uncle Paco ?.

He was my uncle and the brother of my mother. He was a very charming man and when I was a child he was not married yet and he was very devoted to his nephews and nieces .
Holding court. A glorious photograph epitomising what so many people recall . The mesmerizing and captivating effect that Paco had on people. This looks like a preacher and a religious teaching ,rather than a motorcycle builder. Paco opposite Oriol. The little girl in the headscarf is Innes Bulto. You will have seen her earlier in the new Bultaco launch video. 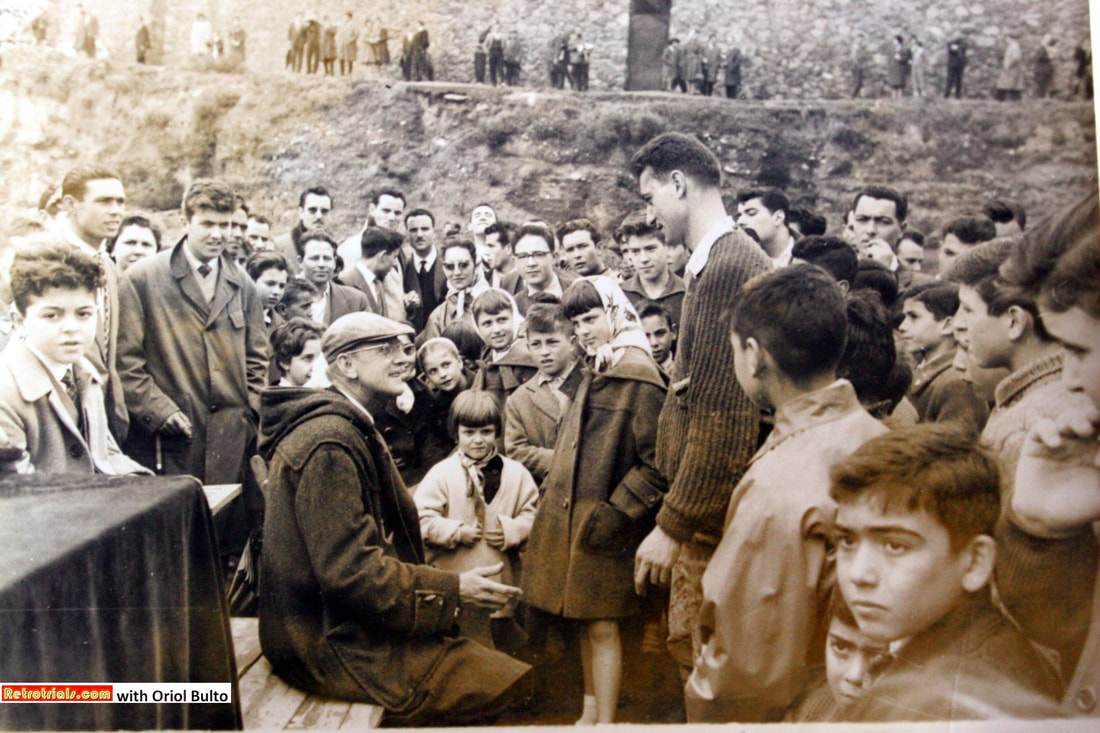 A detailed interview with Oriol Puig Bulto www.retrotrials.com
The family including me spent the summer in San Antonio family house . This place was owned by my Grandparents so by Paco's parents.  So we chill and we would spend about three months there each summer at San Antonio because at this time school was finished. This period would be from the end of June to the beginning of October. We would spend our time they're with our cousins Juan Soler Bulto and then uncle Paco came often and we would go off on walks across the hills . Because it was quite a big farm at the time. At this time it was a vineyard and there were small walls everywhere between the different vine areas . We would jump and climb up the walls and then large groups of our family including sisters and brothers and cousins would walk to the top of the Mountains and run down from the mountains jumping down all of the walls . Some of the walls were quite high and we were scared to jump down them but we would eventually get enough courage to do this and jump .
This is a rear and a front photo Retrotrials took at San Antonio. In the first photo you can see immediately below you the wall drops that Oriol talks about. The Bulto family built the train network in the area and the tower was built so that the man of the house could time the trains as they came into Cunit station.
Also Paco was my Godfather and so at Easter with would give chocolate gifts to each other.  It is a tradition for the Godfather to give the children chocolate and other things.   I remember one year he brought a very big box and we had to open six or seven or eight boxes until I found my cake inside ha ha. Good memories . So really, he was a very charming person Snr Paco.

Was it from your Godfather that you had your first introduction to motorcycles ?

Yes in fact my best feelings for the motorcycles and the fantastic feelings off the air brushing past my face I can remember from when I was 3 years old. This was with Paco on his BMW motorcycle. He would take me on this motorcycle on road trips to the nearby towns of Cunit and back again.  I was  always asking him as a young boy to take me for a ride. Take me,  take me !.  I would be sitting on the bike on the front on the petrol tank and I am very very sure that it was this moment that created for me the excitement of motorcycles and when I saw him with his BMW. His cousin with his  Matchless and some of his friends with their nice English motorcycles came to visit us . It was exciting for me to watch.
From left to right: Bernal Osborne (a British journalist and writer), Paco Soler Bultó, (The person partially behind Paco cannot identified), Juan Luis Gaillard (Bultaco photographer), José Mª Llobet “Turuta”, (good friend of FX Bultó and winner of the first edition of the Montjuic 24 Hours with Juan Soler Bultó),Juan Soler Bultó, Guillermo Marqués (cousin of FXB, behind Juan Soler and FX Bultó), FX “Paco” Bultó, Ignacio Bultó, me, Manuel Giró (good friend of FXB). 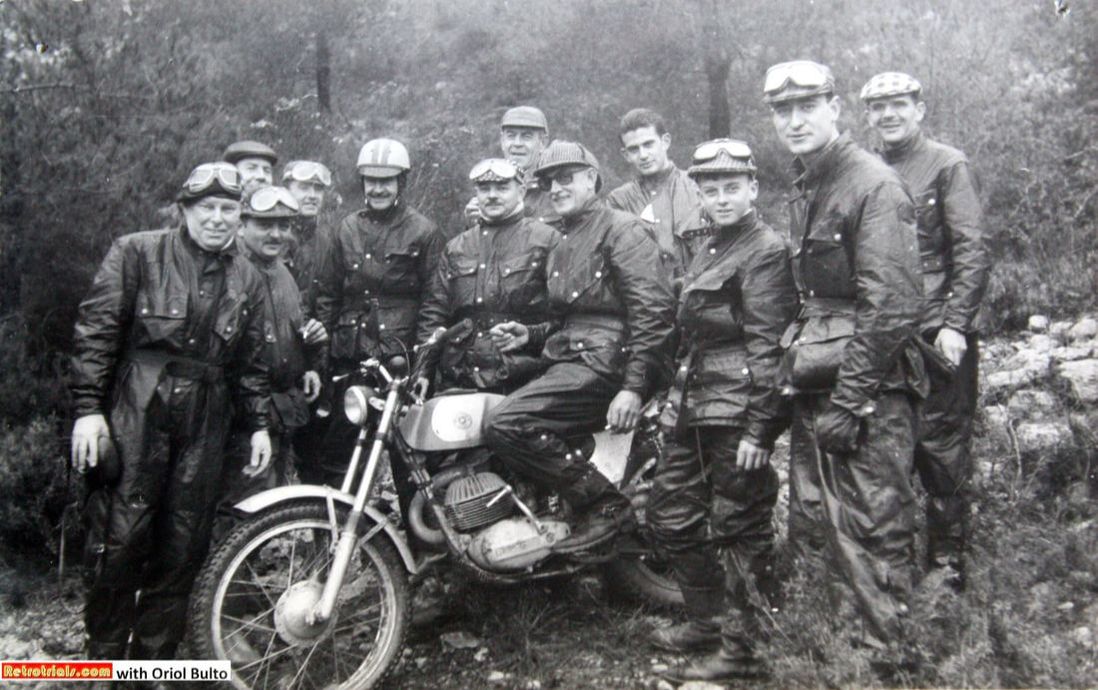 A detailed interview with Oriol Puig Bulto www.retrotrials.com
I remember them working on the 1st Motobecane motorcycle as they were getting ideas to make the very first Montesa . They spent a lot of time in San Antonio  and I remember them with the Motobecane and them changing parts to make the bike better and better. I was with them watching this when i was about only 10 years old. It was very exciting.  When I went to my father's textile factory , I remember this having 1000 loom machines  wish made an incredible amount of noise but a different noise to the motorcycle , and it was the motorcycle noise I liked.  It was a very big factory.
Page 6